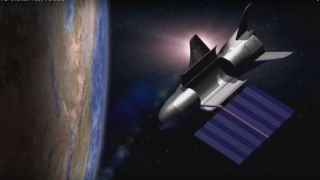 The current mission, OTV-5, began on Sept. 7, 2017, with a liftoff atop a SpaceX Falcon 9 rocket. It’s unclear what the space plane is doing up there now, or what it has done on past flights; X-37B missions are classified, and the Air Force therefore tends to speak of the vehicle and its activities in general terms.

“The primary objectives of the X-37B are twofold; reusable spacecraft technologies for America’s future in space and operating experiments which can be returned to, and examined, on Earth,” Air Force officials wrote in the X-37B fact sheet.

The test campaign seems to involve pushing the X-37B’s endurance, because each of the five missions has lasted longer than its predecessor. OTV-1 launched in April 2010, and returned to Earth that December after 224 days in space. OTV-2 ran for 468 days, from March 2011 through June 2012. OTV-3 launched in December 2012 and landed in October 2014, racking up 675 days of spaceflight. And OTV-4 landed in May 2017 after nearly 718 days in orbit.

OTV-5 is nowhere near the overall spaceflight-duration record, however. Earth-observation and communications satellites commonly operate for five years or more, as do robotic planetary explorers. NASA’s Curiosity rover has been exploring Mars for more than seven years, for example, and the agency’s twin Voyager probes are still going strong in interstellar space more than four decades after their launches.

The Air Force has at least two X-37Bs, both of which were built by Boeing. The solar-powered vehicles look like NASA’s old space shuttle orbiters, but are much smaller; an X-37B could fit entirely within the shuttle’s cavernous payload bay.

Like the space shuttle, the winged X-37B launches vertically and lands on a runway. All five X-37B missions have lifted off from Florida’s Space Coast. The first three landings took place at Vandenberg Air Force Base in California, but OTV-4 touched down at the Shuttle Landing Facility at NASA’s Kennedy Space Center in Florida.