How Christina Koch Could Become a Spaceflight Legend

One of the astronauts in NASA’s current corps could be the first in a generation to walk on the moon—or the first to walk on Mars. 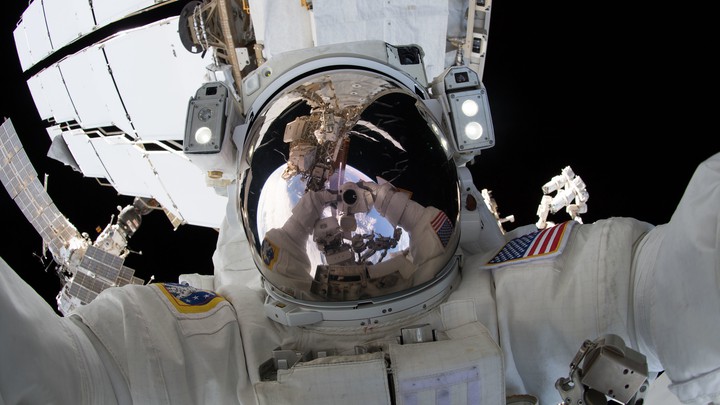 When Christina Koch returned to Earth earlier this month, feeling the full force of the planet’s gravity for the first time in a long time, it was the middle of the night in the United States. Her capsule parachuted into the Kazakh desert, and by morning, her name was all over the news. After spending 328 days living on the International Space Station, Koch had set a new record for American women in space.

The volume of attention that morning, however warranted, was somewhat unusual for a modern astronaut. Missions to the space station are routine now, and the last astronaut to have his full name flashing across headlines, as if in marquee lights, was Scott Kelly, who nearly four years earlier broke the American record for long-duration spaceflight.

All of this is to say that, in this era of space travel, most astronauts don’t become household names. Asked to think of an astronaut, most people would probably default to Neil Armstrong, the first man on the moon—not to one of the dozens of astronauts who have flown to space in this century, or even one of the three who are there right now. The public today is more likely to be familiar with nonhuman explorers, like the Mars rover Curiosity and the New Horizons spacecraft, which photographed Pluto.

But this century holds potential for new milestones in space exploration, the kind that can turn spacefarers into celebrities. The next Neil Armstrong could already be in NASA’s astronaut corps, which is more diverse now than ever before. This person will have charisma and steely resolve—and probably a very compelling Instagram account.

There is no distinct formula that makes astronauts famous, but an obvious component is novelty, says Margaret Weitekamp, a curator in the space-history department at the Smithsonian’s National Air and Space Museum. Firsts—Armstrong stepping onto the lunar surface, delivering his famous line after he put his boot down—become indelible in public memory. Sally Ride, the first American woman in space, is probably the most well-known American female astronaut.

Other superlatives, especially of the Guinness World Records variety—the most, the longest, the oldest—can make astronauts, if not flat-out famous, at least memorable. Peggy Whitson, for example, holds the record for most spacewalks by a woman. Seconds can be even less sticky. Do you remember, for instance, what the commander of Apollo 12, the second moon-landing mission, said when he descended from the lander and touched the gray surface? Or what his name was? Twelve men have walked on the moon, and even those in the space community might struggle to name all of them. Many people don’t realize that there was a third astronaut on the Apollo 11 mission: Michael Collins, who stayed behind in the command module while Armstrong and Buzz Aldrin went to the surface.

Some firsts, of course, can be eclipsed by later, bigger firsts. Alan Shepard was heralded as a national hero when he became the first American to reach space in 1961, less than a month after Yuri Gagarin did it for the Soviet Union. When John Glenn flew a year later, he didn’t just pierce the boundary between Earth’s atmosphere and space; he circled the planet three times. It was a more intense mission, and Glenn came up with a memorable tagline for it, which he repeated for years to come: “Zero G and I feel fine.” Today, Glenn is arguably the more famous of the two. As NASA grew its astronaut corps in the 1960s, astronauts “needed slightly more extraordinary circumstances to break out of the pack and become that household name,” Weitekamp says. Even milestone “firsts” didn’t always make a lasting impression in the national imagination; the first NASA astronauts of color to travel to space—Guion Bluford, who flew on the shuttle in 1983, and Mae Jemison, who followed in 1992—are icons in the space community, but less well known to laypeople.

The first all-female spacewalk, conducted last fall by Koch and Jessica Meir, drew a great deal of attention, and if it ever materialized, so would the first all-female crew on the ISS. When NASA astronauts launch on a brand-new SpaceX transportation system sometime this year, the first endeavor of its kind, the passengers’ names will most certainly cut through the news cycle. But such milestones, on their own, are unlikely to bestow astronauts with mythical status.

“When you start thinking about who’s going to be the next Neil Armstrong, you’re going to be looking for that combination of achievement and that personality that catches the public’s attention, the person who has the ‘it’ factor,” Weitekamp says.

Armstrong, she adds, had it. After he flew a couple of missions for Gemini, NASA’s pre-Apollo program, the agency sent him on a publicity tour through South America. Armstrong took a Spanish conversation class to prepare for the trip and name-dropped important South American figures, particularly in aviation, in his speeches, according to James R. Hansen’s biography of the astronaut. “He never failed to choose the right words,” recalled George Low, a NASA executive who traveled with Armstrong and was impressed.

Low would later manage the Apollo program and its crew assignments, including which astronaut should be the first one out of the lander. Armstrong had proved to NASA leadership not only that he could master the mission—he was one of the agency’s best pilots—but that he could handle the attention, too. Armstrong is famous in part because NASA chose him to be famous and, after he finished the mission, turned him into a spokesman for American spaceflight. Aldrin, meanwhile, may be better remembered for the persona he cultivated after visiting the moon, where he followed Armstrong onto the lunar surface. Whereas Armstrong, who died in 2012, is remembered for his stoic and amiable personality, Aldrin became known for a feisty attitude he has maintained into his 90s. (In recent years, he punched a moon-landing denier outside of a hotel and made a GIF-worthy range of facial expressions behind President Trump as he spoke about space exploration.)

In some cases, the “it” factor can outweigh a record-setting superlative. Chris Hadfield is the first Canadian to do a spacewalk, but he’s best known for his floating rendition of David Bowie’s “Space Oddity” on board the ISS, which has more than 45 million views on YouTube. Scott Kelly holds the American record for the most consecutive days in space, but he built his fan base through frequent Instagram posts of beautiful Earth shots. NASA does plenty of work to promote astronauts, especially those involved in the flashiest missions. But thanks to social media—which astronauts are encouraged to use—the spacefarers can take that much more ownership of their public image.

Fans have always been eager for such personal glimpses of astronauts’ personalities, Weitekamp says; in the 1950s and ’60s, Life magazine ran stories about the lives of the Mercury astronauts, ghostwritten but published under the men’s bylines. These days, every NASA astronaut has a professional Twitter account—a very different kind of launchpad for name recognition, but potentially nearly as effective. A tweet from Koch featuring a heartwarming video of the astronaut greeting her dog, adorably overjoyed after their long separation, quickly went viral.

To be a spaceflight legend, an astronaut will likely need, as Weitekamp puts it, extraordinary circumstances. Imagine the first woman on the moon, or the first people to set foot on Mars. It is not unrealistic to think that at the end of this century, the name of the first person to step onto the red planet will be more prominently woven into collective memory than the name Neil Armstrong. By the end of this century, 1969 will be 130 years in the past, as distant a memory as 1890 is now, when Nellie Bly made headlines by circumnavigating the globe, by ship and by rail, in just 72 days.

These explorers are probably already within NASA’s ranks. (Or, perhaps, working for a private company: The 21st century’s most famous spacefarer could end up being Elon Musk.) NASA recently added 11 new members to its active astronaut corps, bringing the total to 48. The new class, fresh off training, “may be assigned to missions destined for the International Space Station, the Moon, and ultimately, Mars,” the space agency said in a statement. These new astronauts can’t predict which among their ranks might be chosen for the next big feat in spaceflight history, but they can start daydreaming about what they might say as they take their own first step. Or they could go the Armstrong route and wait until the moment is near. Days before Apollo 11 launched, a reporter asked whether Armstrong, being “destined to become a historical personage of some consequence,” had come up with “something suitably historical and memorable” to say when he stepped onto the moon. “No, I haven’t,” Armstrong replied. Better to make history first.