NASA astronaut Scott Kelly recently did a Reddit AMA to discuss living aboard the International Space Station (ISS) since last March, making him the first American to spend a whole year in space.

Here is what Kelly himself had to say about it:

“On this flight, my fourth spaceflight, I also became the record holder for total days in space and single longest mission. A year is a long time to live without the human contact of loved ones, fresh air and gravity, to name a few. While science is at the core of this groundbreaking spaceflight, it also has been a test of human endurance.

Connections back on Earth are very important when isolated from the entire world for such a period of time, and I still have a way to go before I return to our planet. So, I look forward to connecting with you all back on spaceship Earth to talk about my experiences so far as I enter my countdown to when I will begin the riskiest part of this mission: coming home.”

The Reddit users asked Kelly pretty much anything and everything. From questions about health, to creepy occurrences, to rogue spaceships, Kelly provided answers and engaged the Reddit community from afar.

Here are some of the highlights:

Doug_Lee: Why do you always have your arms folded?

Pighalf: Could you tell us something unusual about being in space that many people don’t think about?

Kelly: The calluses on your feet in space will eventually fall off. So, the bottoms of your feet become very soft like newborn baby feet. But the top of my feet develop rough alligator skin because I use the top of my feet to get around here on space station when using foot rails.

Engr89: Being up in space for an entire year is a LONG time. Have you noticed any effects on your body from weightlessness? Are your plans for recovery once you’re back on earth more intensive than traditional programs for other astronauts who only go up for shorter time periods?

Kelly: Good question. Yeah, there are a lot of changes that happen. Some of them you can’t see, cause it’s your eyes! Probably too many changes to go into detail here. I think my rehab plan is the same as if I were here for 6 months, but I’m not positive. 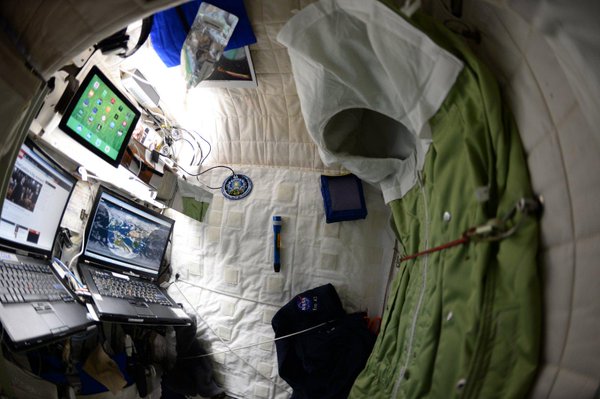 Get it? Because he sleeps in a bag? Credit: Scott Kelly Twitter

JFSOCC: What’s it like to sleep in zero G? It must be great for the back. Does the humming of the machinery in the station affect your sleep at all?

Kelly: Sleeping is harder here in space than on a bed because the sleep position here is the same position throughout the day.

You don’t ever get that sense of gratifying relaxation here that you do on Earth after a long day at work. Yes, there are humming noises on station that affect my sleep, so I wear ear plugs to bed.

Emshedoesit: What does zero G feel like on your body when you are just hanging out? Does it make your eyes open a little bit wider, or anything like that?

Buymeapickle: What is the largest misconception about space/space travel that society holds onto?

Kelly: I think a lot of people think that, because we give the appearance that this is easy, that it is easy. I don’t think people have an appreciation for the work that it takes to pull these missions off, like humans living on the space station continuously for 15 years. It is a huge army of hard working people to make it happen.

Beccastainton: What ONE thing will you forever do differently after your safe return home?

Kelly: I will appreciate nature more.

Jenniferpanas: How do you regulate your sleep cycles? How heavy is your space suit? How well have you adjusted to keeping social relationships while away? Will you have transitioning issues with this when you return home?

Kelly: We use Greenwich Mean Time and we get up at 6 in the morning and go to sleep at 10 at night. It’s really light up here! On Earth, it weighs about 200 pounds. It’s not the easiest thing, but we do have a good way to communicate. I do suspect there will be an adjustment period when I get back.

ItsBasil: What is like to work with members of other nations space programs? Do the politics that take place on Earth affect your relationship with them?

Kelly: I think one of the great things about the space station program is that it’s an international program. We get along very well. We have to because we rely on each other for our lives.

Lula2488: What’s the creepiest thing you’ve encountered while on the job?

Kelly: Generally it has to do with the toilet. Recently I had to clean up a gallon-sized ball of urine mixed with acid.

Curtquarquesso: The ball of urine I get, but… Acid? How? Where from?

Kelly: The acid is added to the urine so the urine doesn’t damage the machinery that moves it through the system. It keeps it from clogging up the system.

Kezeemom: Does everything seem to take a really long time or do you get used to that? What would you like to see the next president do for the space program? And how often do you get to talk to your brother and daughters?

Kelly: It absolutely takes longer to do things when you can’t put anything down. I would like the next president to support a budget that allows us to accomplish the mission that we are asked to perform, whatever that mission may be. I talk to my brother and daughters every few days.

Chancycat: I am dad to a couple of boys who are very much into space and astronaut work. Here are their two astronaut questions:

Peter (7yrs old): How long does it take to get used to being in space?

Simon (5yrs): Could a rogue spaceship sneak up on the space station without you being aware, and dock?

Kelly: Peter, 302 days and counting! The longer I am here the more normal I feel. It always seems to be getting better. Simon, maybe an alien spaceship with a cloaking device. But not your normal spaceship, no. Unless it had a cloaking device, which doesn’t exist, the U.S. Air Force would see it coming.

Jlhatfield: Hi, I’m a Kindergarten Teacher. My students and I have been following you since you went up last year. My past and present students are curious; what kind of things do you do for fun?

Kelly: I read, write and do arithmetic like a Kindergartner (just kidding). But I do read, take photos of the Earth and play with my food.

Equilateralistic: Does the ISS have any particular smell?

RagingRachel: Do you ever feel alone/afraid? If so, how do you combat those feelings?

Kelly: I don’t feel alone or afraid. I was up here for 6 weeks as the only American on the U.S. side of the space station and I was fine. I have been afraid when the ground has called and privatized the audio generally meaning something bad has happened.

FHayek: Do you really feel the change in outside pressure when getting outside during the EVAs, where your suit inflates more and is it harder to move? Do you have sense of stereoscopic depth, as to how far the earth is from you, or is it one scary and inconceivable distance?

Kelly: Our spacesuit when we are spacewalking has about 4psi above the outside pressure, so when you are in it, it’s generally the same stiffness as when you are doing a spacewalk. When I look at the clouds over the Earth, and I know how high clouds are, I get a sense we are really, really far above those clouds. So, it does look like we are very high. I wouldn’t call it scary, but I am aware I am in space. A spacewalk requires an incredible amount of mental concentration, so it’s not something I think of when I am spacewalking.

SkeerRacing: Today is your 302nd consecutive day aboard ISS, if you could go back and give yourself advice on day 1, what would you say?

Kelly: I’d like to have some involvement and continue to work towards people going to Mars. The advice I would give myself on day 1 would be pack lighter! 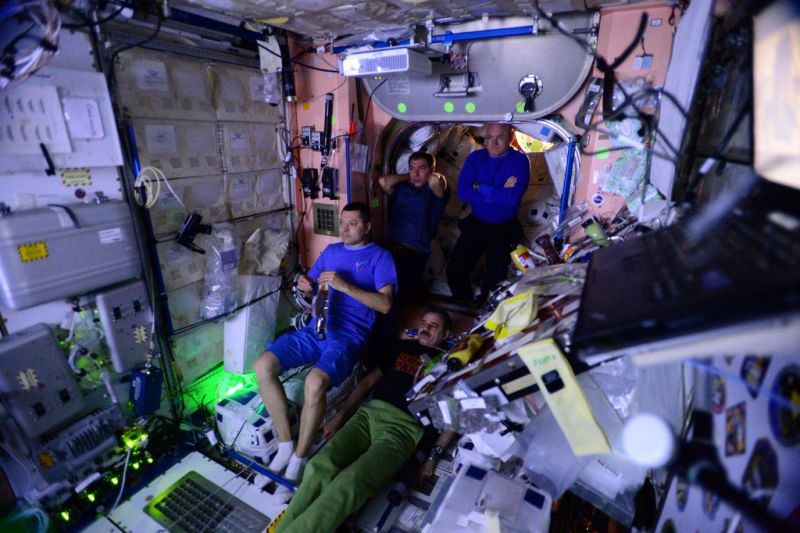 Therickshawme: Do you watch sci-fi while you’re up there or does some of that stuff hit a little too close to home?

Kelly: I watched the movie Gravity not long after I arrived back in last March. I thought it was a cool movie to watch here aboard the space station that is also the setting of Gravity.

TMahlman: Now that you are able to count down the days to come home in March, what will you miss most about the Space Station daily life?

Kelly: The challenge of living here. It’s not easy and I have always liked to do things that are hard.

ImPastamonium: Out of all the things you’ve accomplished in your career, what is the one thing that you have done which you are most proud of? What are some of your favorite things to do in zero gravity? During a space walk what does it feel like having nothing but a suit (all be it a rather sophisticated one) between you and space?

Kelly: This mission isn’t easy. So I think when I complete this mission, it will be up there, definitely. Sleeping, taking pictures of the Earth, and getting to the end of a satisfying day of work. It is a little bit surreal to know that you are in your own little spaceship and a few inches from you is instant death.

Urciolo: What is your view on how the ISS hardware/modules have been aging? Do you believe it makes more sense to de-orbit the ISS or attempt to keep it going by replacing modules as they become too old to maintain?

Kelly: It seems like the inside of the space station has very good material condition. The outside looks a little aged. As far as maintaining it versus de-orbiting it, it just depends what our priorities are. I think it would be great to keep it going forever, but of course everything has costs.

Arandomkerbonaut: What is your favorite space-related movie? Also, if you had the chance to ride the space shuttle again, or take Orion on a journey to Mars, which would you pick?

Kelly: really enjoyed the Martian. I was able to watch it here aboard the space station. I’ve flown the space shuttle a couple of times, so I would want to fly to Mars. That would be something new and exciting, and is the next step in our journey of space exploration.

Jclishman: What is your favorite part of Earth to see from space?

Kelly: My favorite spot on Earth to see from space is probably the Bahamas. The brilliant and varied colors of the blue water and contrast from here is pretty spectacular.

Questions have been edited for length and clarity.