Unity is now in the final phase of its test campaign. 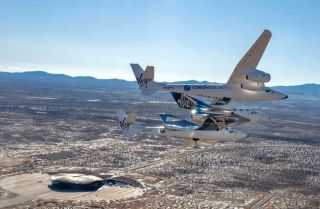 Virgin Galactic is one big step closer to flying customers to suborbital space.

Unity made the trip from Mojave, California — the home base of Virgin’s manufacturing subsidiary, The Spaceship Company — beneath the wings of VMS Eve, the plane that will carry Unity aloft during operational missions. The journey therefore kicked off the final stages of Unity’s test campaign.

“This captive-carry flight provided an opportunity for engineers to evaluate VSS Unity for over three hours at high altitude and cold temperatures, a longer period of time than is experienced during missions to space,” Virgin Galactic representatives wrote in a statement yesterday. “These environmental evaluations of system performance are difficult to replicate at ground level, making captive-carry missions a vital component of VSS Unity’s flight-test plan.”

SpaceShipTwo is a six-passenger space plane designed to carry people and scientific payloads on brief trips to suborbital space. The vehicle gets airborne with the help of a carrier plane called WhiteKnightTwo (VMS Eve).

At an altitude of about 50,000 feet (15,000 meters), WhiteKnightTwo drops SpaceShipTwo, and the space plane fires up its onboard rocket motor to make its own way to suborbital space. Passengers onboard SpaceShipTwo will get to experience a few minutes of weightlessness and see Earth’s curvature against the blackness of space before coming back down for a runway landing.

A ticket to ride SpaceShipTwo currently sells for $250,000, and more than 600 people have put down a deposit to book a seat, Virgin Galactic representatives have said.

Unity has already made it to the final frontier twice, acing piloted test flights to suborbital space in December 2018 and February 2019. Both of those missions took off from Mojave, as did the space plane’s many other test flights.

But the test campaign has now moved to New Mexico. There will be more captive-carry flights from Spaceport America, as well as unpowered “glide flights” and rocket-powered test missions, Virgin Galactic representatives wrote in yesterday’s statement. This work will continue to prove out Unity’s performance and also allow the vehicle’s pilots to familiarize themselves fully with Spaceport America and its surroundings.

When these test flights are done, Unity will be ready to begin flying paying customers.

“When Virgin Galactic started moving to New Mexico [from Mojave] last year, everyone felt the sheer magnitude of the task ahead, but we were encouraged and excited by the team’s confidence and strong vision for the future,” Virgin Galactic CEO George Whitesides said in yesterday’s statement.

“Today we realized the next step in that dream by bringing our beautiful spaceship to New Mexico,” he added. “We still have significant work ahead, but we are grateful to all our teammates who have made this day a reality.”

Virgin Galactic’s vision of the future involves more than just VSS Unity and VMS Eve. The company’s hangar at Spaceport America can accommodate five SpaceShipTwo vehicles and two WhiteKnightTwo craft simultaneously, allowing for frequent flights from the facility. And Virgin Galactic intends to fill that hangar eventually; two additional SpaceShipTwo vehicles are currently under construction in Mojave, for example, and both are pretty far along.