SpaceShipTwo Serial No. 3 is nearing completion. 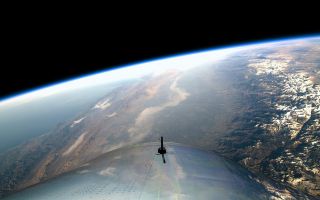 Virgin Galactic will soon have two space planes plying the sky, if all goes according to plan.

The company’s newest six-passenger SpaceShipTwo vehicle, known as VSS Unity, is nearly ready to fly tourists to suborbital space and back. Unity reached space on its two most recent test missions, and the craft is being prepped for a move to Spaceport America in New Mexico, the hub for Virgin Galactic’s commercial operations.

Virgin Galactic’s manufacturing subsidiary, The Spaceship Company, is currently building two additional SpaceShipTwos in Mojave, California. And one of them is almost ready to go, Virgin Galactic President Mike Moses told Space.com last week at the unveiling of the company’s Gateway to Space building at Spaceport America.

“We expect to see test flights in 2020,” Moses said, speaking about the vehicle known as Serial No. 3. (VSS Unity is Serial No. 2. The first SpaceShipTwo, VSS Enterprise, was destroyed during a test-flight accident in October 2014 that killed co-pilot Michael Alsbury and wounded pilot Peter Siebold.)

Serial No. 4 is in production as well. And that’s how we’ll have to refer to these two future space planes, at least for now.

“They have internal names, but we’re not revealing them yet,” Moses said.

Now that the wing structure is complete, the next major step will be to join it to the completed fuselage. Exciting to see our next spaceship starting to take shape! pic.twitter.com/aUiWqu7lY8August 2, 2019

Closing out the wing of the next spaceship in our fleet consisted of integrating both structures and systems before finally bonding the lower skins and completing the main wing structure. Great job, @TheSpaceshipCo! pic.twitter.com/1SfEbykFBCAugust 1, 2019

We have completed the wing of the next spaceship in our fleet, a major milestone in its manufacture. Watch as our teammates bond the internal structures together to complete the internal frame https://t.co/ZW8mFsXGkX pic.twitter.com/56c3YzoAHmJuly 31, 2019

SpaceShipTwo is designed to be lofted by a carrier plane called WhiteKnightTwo. At an altitude of about 50,000 feet (15,000 meters), the space plane separates from the carrier; then, SpaceShipTwo engages its onboard rocket motor to make its own way to suborbital space.

Passengers aboard the vehicle will experience a few minutes of weightlessness and get to see the curvature of Earth against the blackness of space before coming back down to Earth for a runway landing.

A ticket for this ride currently costs $250,000, and more than 600 people have put down deposits to reserve a seat, Virgin Galactic representatives have said.

Unity’s test flights to date have all originated from the Mojave Air and Space Port in Southern California, near The Spaceship Company’s headquarters. But the final missions in the test campaign will lift off from Spaceport America. Virgin Galactic’s one and only WhiteKnightTwo plane, VMS Eve, will haul Unity to the spaceport in the next few months, after technicians finish outfitting the space plane’s cabin, company representatives said. (VSS stands for “Virgin Spaceship” and VMS for “Virgin Mothership,” by the way.)

The Gateway to Space will be able to fit the new SpaceShipTwos when they’re ready, with plenty of room to spare. The building’s hangar can accommodate two WhiteKnightTwos and five SpaceShipTwos simultaneously, Virgin Galactic representatives said.

And that cavernous space provides an insight into the company’s long-term plans: Virgin Galactic aims to eventually achieve a rapid cadence of commercial flights, perhaps even launching multiple missions per day out of Spaceport America, company representatives have said.