The spaceflight company Virgin Galactic has received nearly 8,000 online reservations of interest since its first successful test flight 14 months ago.

The company reported this week on the number of people reserving seats for future space flights as it nears commercial operation and prepares to reopen ticket sales.

Virgin Galactic already had more than 600 confirmed reservations, from people in 60 countries, before the December 2018 test flight. It then suspended ticket sales.

On Wednesday the company announced that it will begin a process called “One Small Step.” It is for those online registrants who are serious about becoming passenger astronauts. They are now required to pay $1,000 toward the cost of their flight. Virgin Galactic says they will get the money back if they change their minds.

Confirming a spaceflight reservation will be a process called “One Giant Leap.” Those are the words American astronaut Neil Armstrong said when he became the first person to set foot on the moon in 1969.

Virgin Galactic did not say when the new set of seats would be released or the actual cost. The company set the cost of the first set of seats at $250,000 each. 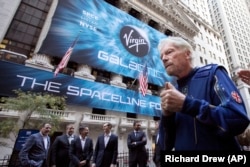 Virgin Galactic spent years developing and testing its space flight technology at Mojave Air & Space Port in Mojave, California. Now it is moving toward starting actual operations at Spaceport America in southern New Mexico. A start date has yet to be set, however.

Virgin Galactic is offering flights just outside Earth’s atmosphere, as high as 80.5 kilometers up in space. There, passengers will see large parts of the planet’s surface and experience a few minutes of weightlessness before the spacecraft returns to Earth.

The current number of online registrations is more than double the number Virgin Galactic last reported in September 2019.

Stephen Attenborough is the company’s commercial director. He said in a statement that the increasing demand for personal spaceflight was a good sign.

British billionaire Richard Branson created Virgin Galactic after the historic 2004 flights of the experimental SpaceShipOne. Money for that spacecraft came from Paul Allen, a co-creator of the Microsoft Corporation. SpaceShipOne won the Ansari X Prize, worth $10 million, as the first privately developed, manned rocket to reach space.

Virgin Galactic’s six-passenger spacecraft is called SpaceShipTwo. A carrier aircraft carries it high into the atmosphere and releases it before its rocket engine fires.

John Antczak reported this story for the Associated Press. Pete Musto adapted it for VOA Learning English. George Grow was the editor. Write to us in the Comments Section or on our Facebook page.

Words in This Story

reservation(s) – n. an agreement to have something, such as a room, table, or seat held for your use at a later time

commercial – adj. related to or used in the buying and selling of goods and services

ticket – n. a piece of paper that permits you to see a show, take part in an event, or travel on a vehicle

billionaire – n. a rich person who has at least a billion dollars