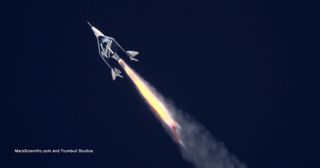 If you’re looking to book a ride to suborbital space with Virgin Galactic, you shouldn’t have to wait much longer.

More than 600 people have reserved a seat aboard the company’s six-passenger SpaceShipTwo craft, which is designed to carry customers and payloads on brief trips to suborbital space and back.

Virgin Galactic halted ticket sales in December 2018 after its latest SpaceShipTwo vehicle, VSS Unity, reached space for the first time, on a piloted test flight. But that hiatus will soon come to an end, company representatives said.

“In light of continuing, strong progress towards commercial service, Virgin Galactic is now preparing to release its next tranche of seats for sale to the general public,” Virgin Galactic representatives wrote in an update on Tuesday (Feb. 25).

“In the first phase of that process, the company will be launching its new One Small Step qualification process on Wednesday, February 26th, allowing those who are serious about flying to space to register now and be front of line for firm seat reservations, once they become available,” they added.

Qualifying via One Small Step, which you can do here, involves making a refundable $1,000 deposit.

It’ll take a lot more cash to actually go up on VSS Unity, though exactly how much more is not clear at the moment. The most recent ticket price for SpaceShipTwo was $250,000, but Virgin Galactic has not yet revealed what seats will cost when they go on sale again.

SpaceShipTwo is carried aloft by an airplane known as WhiteKnightTwo, which drops the winged spacecraft at an altitude of about 50,000 feet (15,000 meters). At that point, SpaceShipTwo’s onboard rocket motor fires up, taking the vehicle up to suborbital space.

Passengers will get to see the curvature of Earth against the blackness of space and experience a few minutes of weightless before coming back down for a runway landing.

VSS Unity has reached the final frontier on two test missions — the December 2018 flight and another one in February 2019. Those flights took off from Mojave, California, where Virgin Galactic’s manufacturing subsidiary, The Spaceship Company, is based. But commercial operations will take place at Spaceport America in New Mexico.

And commercial operations could start soon — perhaps sometime this year. VSS Unity recently relocated to Spaceport America and has begun the final phase of its test campaign.

Virgin Galactic’s vision doesn’t begin and end with VSS Unity. Two more SpaceShipTwo vehicles are currently being built in Mojave, and others will likely follow; the company’s hangar at Spaceport America can accommodate five SpaceShipTwos and two WhiteKnightTwos simultaneously.