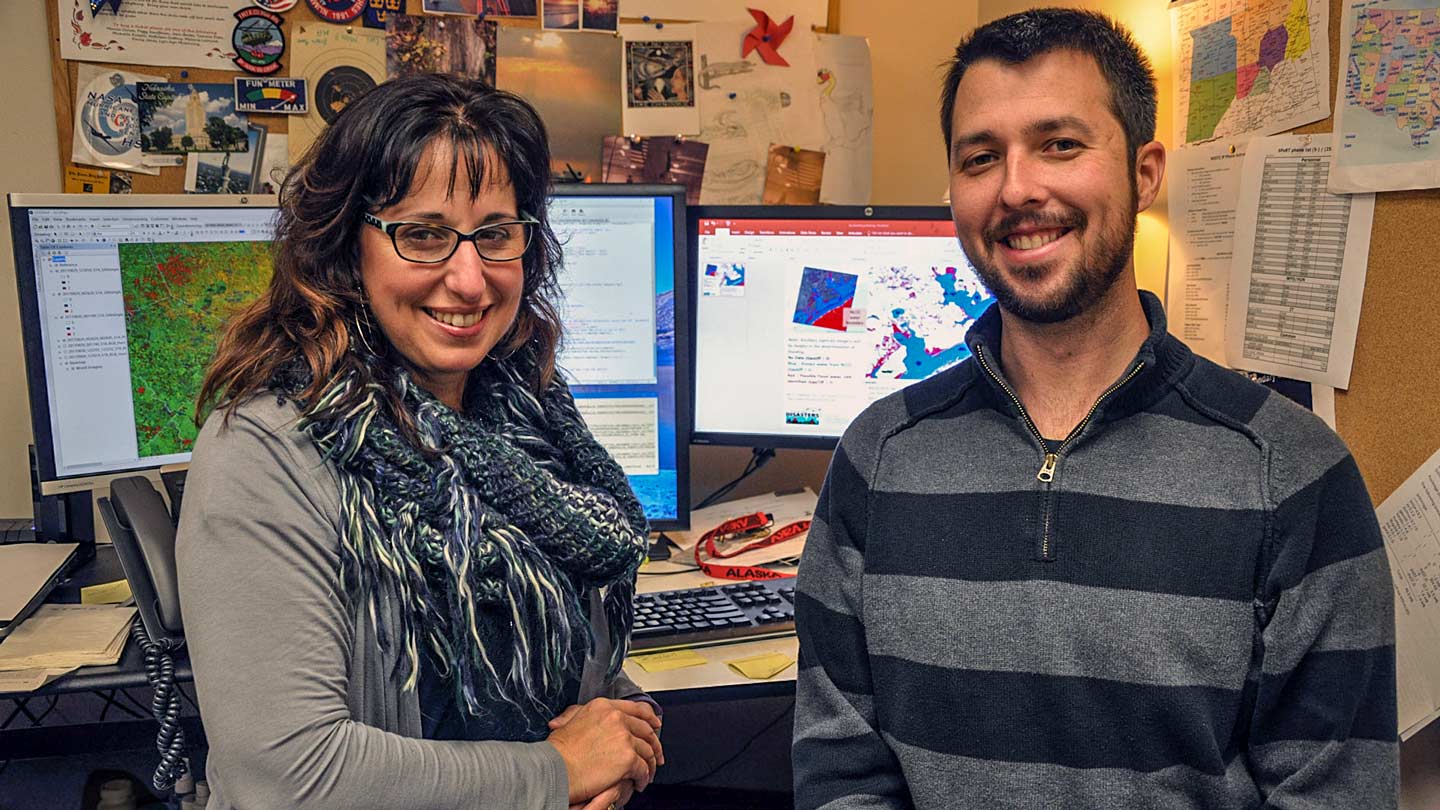 For almost two months after Hurricane Maria came ashore in Puerto Rico and threw the island into darkness, UAH’s Lori Schultz and Jordan Bell watched the lights come back on.

Satellite images of Puerto Rico at night from before the hurricane showed an island with lights blazing from its cities and towns, with smaller clusters of light sparkling up from the island’s rural areas.

Images taken shortly after the hurricane hit on Sept. 20 showed a black shadow in the Caribbean Sea, with a handful of generator-powered lights sparsely speckled across the landscape. 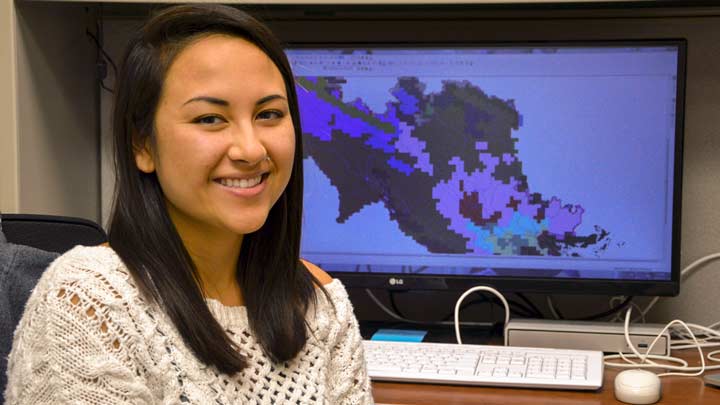 UAH graduate student Thai Munroe was part of a “map-a-thon” after Hurricane Harvey hit Texas. Munroe, other students and UAH scientists were part of a team analyzing satellite data to help emergency responders in Texas map and track flooding caused by the hurricane.

Schultz and Bell used images taken by several satellite instruments to report to officials involved in Puerto Rico’s recovery where the lights were on last night, and how that compared to the night, week and months before. Officials from FEMA and the National Guard (among others) used that information to see where power had been restored and where they needed next to focus their resources and efforts.

At last report, electricity has been at least partially restored and the lights are back on for a little more than two thirds of the people who live on the island. Both Bell and Schultz have returned to a somewhat more normal routine (which is to say, frantically getting ready for a pair of scientific conferences).

During the 2017 hurricane season, however, spanning the landfalls of hurricanes Harvey in Texas, Irma in Florida and Maria in Puerto Rico, Schultz and Bell were two of more than a dozen University of Alabama in Huntsville (UAH) students and employees who were assigned or who volunteered their time, and their satellite remote sensing and data analysis expertise to help in recovery efforts, joining NASA and partnering scientists from across the U.S.

After Harvey, “FEMA and the National Guard were both very interested in knowing where there was standing water,” said Eric Anderson, a research scientist in UAH’s Earth System Science Center who supports SERVIR, a joint initiative of NASA and the U.S. Agency for International Development. “But there was a gap in analyzing data after hurricane Harvey, so we asked for help and we got a big response.”

“Jordan asked Eric if we could help,” said Thai Munroe, an M.S. student in Earth system science who was working with SERVIR. “It was really bad, so they asked, ‘Is there anyone free who has some remote sensing experience?'”

“Some SERVIR students were told, ‘This is your task for the week,'” said Garrett Layne, also an M.S. student in UAH’s Earth system science program. “This was the first time I’ve ever done feature identification. It was new to me, but it’s something I want to do, so it was a good skill for me to learn.”

The team used data and images from two European Space Agency satellites, Sentinel 1 and 2, as well as data provided by a Canadian satellite, Japan’s ALOS II satellite and Russian multispectral data, as well as images from U.S. commercial satellites. These datasets were provided through the U.S. Geological Survey’s Hazards Data Distribution System, which helps to gather disaster-related imagery for use, processing and decision making in collaboration with domestic and international partners.

The extent of flooding from Harvey was so great, the team was forced to use higher resolution commercial imagery and other techniques to help map the affected areas. The process of merging all of the data and images into information useful to people on the ground in Texas was both intense and difficult to automate, several team members agreed, especially given the need for rapid analysis.

“It takes a lot of human eyes and filtering,” Anderson said.

“In a case like this, speed is essential and the end product doesn’t have to be perfect,” Schultz said. “Our clients would say, ‘Horseshoes and hand grenades are good enough.’ Many of the decisions that need to be made, they need to act upon immediately. We were balancing the desire to get it research-grade perfect with the near real-time needs of the response teams.

“FEMA used some of our data as a check against what their models were saying,” Schultz said. “We got some word during Harvey that they also were using our maps to see if people asking for aid, if their address was under water.”

“They needed the data in a timely manner, so you had to weigh timely versus perfection,” said Layne. “It doesn’t matter if it’s perfect if you get it to them a week late. Usually, 85 to 90 percent was good enough.”

“I don’t think this could have been done by a computer,” said Munroe. “There was no real way to automate the process, which is why we needed a big team and it took so long.”

Some of the satellite images showed areas larger than Madison County, Layne said. The goal, he said, was to “translate the image into definitely water and definitely not water, plus no data or not sure.”

“It’s not the same for every image,” he said. “They’re not going to be perfect. Cloud shadows look like water; they’re both dark and cool. You have to look at the image in some detail to see, ‘This is a field. It’s not supposed to be under water.’ You can zoom in and see a road that’s under water.

“You would analyze the whole thing at once, then go back and scan it little chunks at a time.”

One of the highlights for the team, Bell said, was when “the first group of images went to FEMA and, within a couple of hours we got the word back, ‘These are matching our models.’ We knew we could ship it off, because you knew your products were working.

“We knew we were on the right track, being able to provide data in a timely, meaningful way. It has been a blur since then. Our team didn’t miss a beat.”

For the volunteers, the next weeks involved long hours of analysis, flipping back and forth between new images showing flooding after Harvey and older images showing where rivers, ponds and other water was supposed to be under normal conditions.

“There were several 12 and 14-hour days mixed in there, and some weekends,” Bell said.

“We all had a kind of map-athon, basically,” Munroe said. “A lot of us were working from home, and at night and over the weekends. I think the reason we were all working through the night was that it felt so important.

“We were all really eager to help,” she said. “The fact you knew there was someone who was going to get immediate use from your work meant it was important to do the very best you could, because there wasn’t a chance to go back and edit it.”

“The SERVIR grad students all got to roll up their sleeves and produce something they knew FEMA was looking at,” Anderson said. “They knew their work was seen.”

“It makes you want to do a good job,” Layne said. “It gives you more motivation, although it’s tough to get over that perfectionist attitude. The fact I knew I was doing something useful made it more intense and more interesting than doing a project for class.”

“I know from reading rescue stories that what we did could have helped people,” Munroe said. “Knowing I could help a community so far away wasn’t a small thing to me. It was pretty big. It felt good to be part of something so important.

In addition to providing useful data to emergency responders, the hurricane response helped FEMA and other agencies recognize the value of the information available through remote sensing. As the NASA/UAH team gained experience working with emergency responders, they were able to improve their products, Schultz said. That led to other opportunities to support disaster relief.

Recently, she has been downloading short-wave infrared satellite data to prepare maps of fast-moving forest fires in California. “Before, this was exploratory,” she said. “Now it’s, ‘Send me data.'”

Efforts by UAH team members in support of NASA’s hurricane recovery efforts were vital, said Dr. Andrew Molthan, a research meteorologist in NASA’s Earth Science Branch, and one of two coordinators of disaster response activities at Marshall. “By my count, our NASA and UAH team members worked over 60 consecutive days, nights, weekends and holidays to support response to the three storms. With the overwhelming amount of data available, the need for rapid response, and coordination with our end user partners, help from our SERVIR and UAH team members was crucial in supporting NASA’s efforts.”

Other UAH students who participated in the “map-athon” included Kelsey Herndon and Ronan Lucey.