Things to Do in Maryland: Goddard Space Flight Center 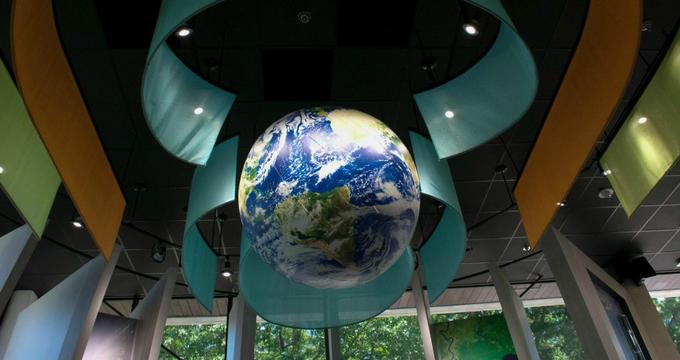 NASA’s Goddard Space Flight Center is located in Greenbelt, MD, just 30 minutes from Washington, D.C. Goddard was NASA’s first space flight center, and the research laboratory was founded in 1959. The visitor’s center at Goddard displays the technologies and spacecraft that were developed on site. Exhibits highlight the agency’s continued work in Earth and planetary sciences, physics, engineering, technology, and astrophysics. Highlights include scale models of the Hubble Space Telescope and the Science on a Sphere (SOS) projection system, which projects a high-resolution video on to a 6-foot diameter globe, illustrating data from Goddard’s Earth and planetary science missions. There are currently over 130 SOS kits installed worldwide.

More ideas near me: Best Day Trips, Free Things to Do Permanent Collection

Additional permanent exhibits include Neighborhood Earth, which explores Earth’s “smallness” from the perspective of space, and GLOBE Hall, which encourages participation in Earth sciences via NASA’s GLOBE program. GLOBE stands for Global Learning and Observations to Benefit the Environment and enlists students in assisting NASA with the collection of data worldwide. Solarium is a digital art installation that features NASA’s video footage of the sun and immerses the viewer in a video “room” that is simultaneously educational and awe inspiring. The Space Operations Learning Center teaches visitors what life is like aboard a space station and what satellites do. A full-sized prototype of the Lunar Reconnaissance Orbiter lets guests stand in the footsteps of the astronauts who landed on the moon and displays moon rocks brought back by Apollo 14. The James Webb Space Telescope will launch in 2018 and is currently being developed at the Goddard Space Flight Center. An interactive 3-D tour of the mission lets guests see what they look like in infrared light and teaches them about the mission of the James Webb Telescope.

Outdoor exhibits include the Ozone Garden. The display educates guests on the effects of ozone deterioration on plant life and on the role of satellite missions in gathering data on the Earth’s atmosphere. The Rocket Garden and Astrobiology Walk brings guests around an outdoor exhibit on the origins of life and our solar systems and displays a collection of historically significant rockets. Items on display in the Rocket Garden include a Cushcraft fixed position satellite antenna from the 1980s, a replica Apollo spacecraft capsule, four sounding rockets, and Thor Delta, a Douglas Aircraft launch vehicle. The sycamore tree outside the visitor center began its life as a seed on a trip to the moon with Apollo 14 as part of project in partnership with the U.S. Forest Service.

Originally the Beltsville Space Center, the facility became the Goddard Space Flight Center (GSFC) in 1959 in honor of Dr. Robert H. Goddard (1882–1945), who built the world’s first liquid-fueled rocket, kickstarting the era of space exploration. Goddard has played a significant role in the history of space exploration, research, and technology development. Employees of the center contributed to Project Mercury, the first manned spaceflight program in the United States. The center has also developed many of the unmanned satellite research missions, including the Solar Max satellite, launched in 1980 to investigate solar flares, and the Hubble Space Telescope, launched in 1990 as the first major optical telescope to be stationed in space. Today, the center employs over 10,000 contractors and civil servants and plays an integral part in many of NASA’s programs to collect research data on the Earth and other planets, including studying the moon for future manned operations.

Recurring events at the flight center include monthly model rocket launches. On the first Sunday of each month, guests can prepare and bring their own model rockets and make use of the launch pad at the visitor’s center. The Sunday Experiment is a once monthly program that showcases Goddard’s research development through family-friendly interactive shows. An Educator’s Resource Center helps teachers of all levels learn about NASA’s resources and how to implement them in the classroom. Programs are focused on helping teachers integrate science, technology, and math into their curriculums. Equipment such as portable planetariums, model rocket launchers, and Science on a Sphere kits may be loaned. Exhibits for loan include samples of meteorites and moon rocks, which can be shipped for classroom use within the United States. For adults, science seminars and colloquia are offered in partnership with outside organizations and include Systems Engineering Seminars and the Information Science and Technology Colloquia.