The Future of Human Spaceflight

Are astronauts close to extinction? 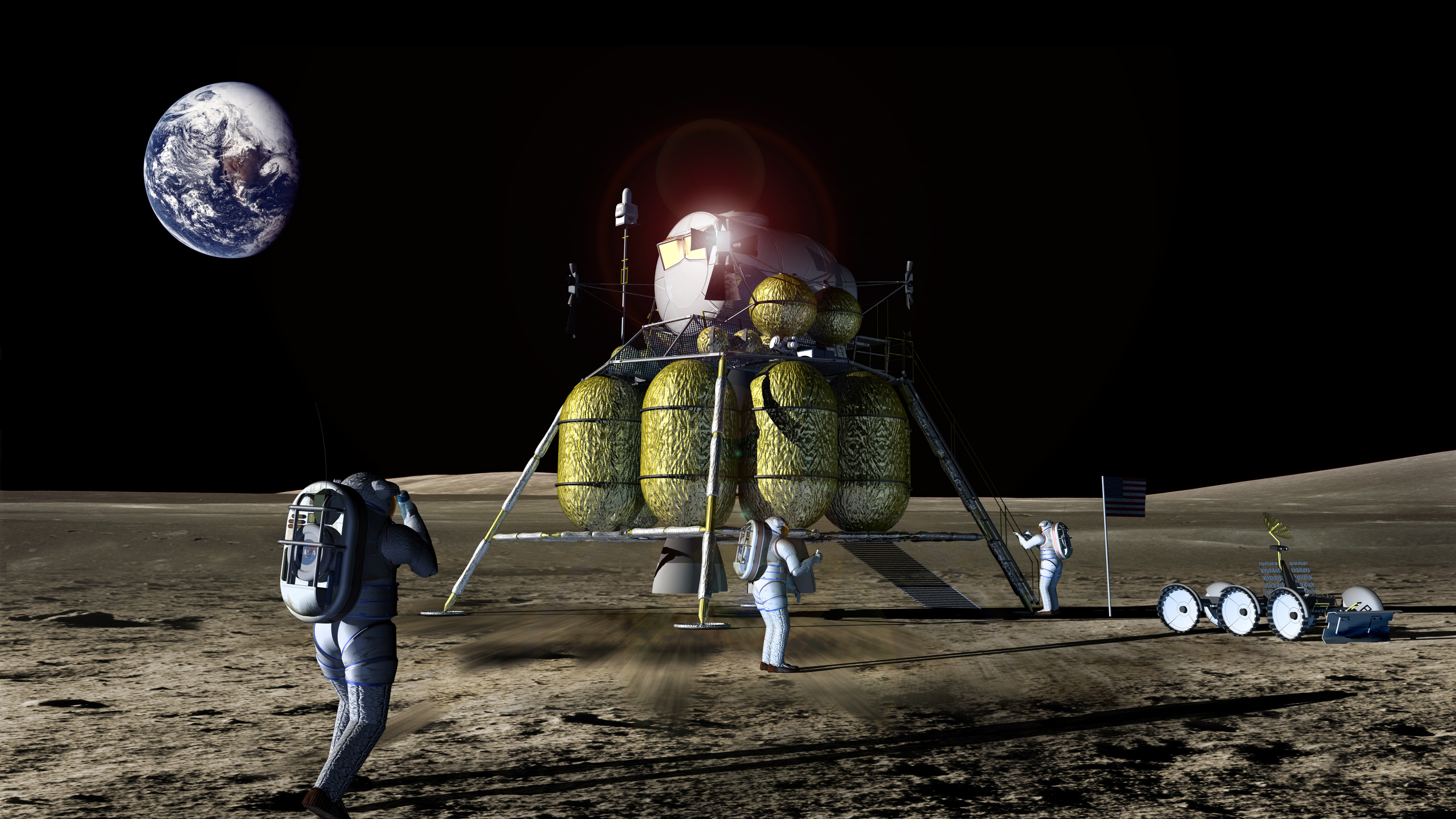 The International Space Station (ISS) is one of the most complex and expensive engineering projects ever undertaken. When it is completed in 2011, it will have cost nearly $100 billion. And then, just five years later, the space station will be destroyed when NASA deliberately takes it out of orbit and plunges it into Earth’s atmosphere.

This story is part of our January/February 2010 issue

That, at least, is NASA’s current plan. The agency would like to keep the station running, but funding for it is projected only through 2015, much to the consternation of researchers who are just beginning to use it and international partners who have invested billions of dollars in the project. Extending the life of the station would cost $2 billion to $3 billion a year. Even “deorbiting” it–dumping its remains safely into the ocean–will not be cheap, costing at least $2 billion.

The 2015 deadline means that after decades of largely directionless space policy, Congress will be forced to make at least one clear decision: it must allocate funds for either the space station’s continued operation or its destruction. And that is just one of a number of urgent issues facing the country’s human spaceflight program. The space shuttle is due to be retired by late 2010 or early 2011, leaving NASA without a means of sending astronauts anywhere for several years. And the key elements of NASA’s exploration program, the Ares I rocket that will launch astronauts into orbit and the Orion capsule that will ferry them around in space, are several years behind schedule.

In October, the Augustine Committee, a panel chartered by the White House and chaired by former Lockheed Martin CEO Norman Augustine, issued its report on the future of space travel. The committee examined NASA’s plans and explored alternatives. Much of the report discussed the merits of different destinations in space and the rocket and spacecraft technologies that could be used to reach those destinations. But embedded in the report is a rationale for why there should be a human spaceflight program at all. “The Committee concluded that the ultimate goal of human exploration is to chart a path for human expansion into the solar system,” it states.

Over the years, NASA and space advocates have put forward many reasons to justify sending astronauts into space. They have garnered support by offering something for everybody, especially the military and scientific communities; scientific progress, strategic superiority, and international prestige have been foremost among the promised benefits. On closer inspection, though, these justifications don’t hold up or are no longer relevant. For example, robotic missions are increasingly capable of scientific work in space, and they cost far less than human crews. Satellites launched on expendable boosters allowed the United States to achieve strategic dominance in space. And Cold War motives disappeared with the collapse of the Soviet Union.

Consequently, some have concluded that there is no longer any reason for human space exploration. A longtime critic of human spaceflight was the late James Van Allen, who in 1958 made the first major scientific discovery of the space age: the radiation belts around Earth that bear his name. In a 2004 essay, Van Allen wondered whether robotic spacecraft had made human spaceflight “obsolete.” “At the end of the day,” he wrote, “I ask myself whether the huge national commitment of technical talent to human spaceflight and the ever-present potential for the loss of precious human life are really justifiable.”

But for most of the engineers and astronauts involved in the space program, astronauts can never be rendered obsolete by robots, because human spaceflight is an end in itself. They share the committee’s belief that the purpose of these manned missions is to allow people to expand into, and ultimately settle, outer space.

For taxpayers who may well consider that prospect a pipe dream or the stuff of science fiction, the question is why their money should be spent to support it. The argument for funding human space exploration becomes similar to the argument for funding fundamental research: that doing so sometimes pays off big, usually in unexpected ways. By definition, high-risk ventures such as space exploration or curiosity-driven science seem unlikely to succeed and have unpredictable outcomes, but just such ventures have led to many inventions and discoveries with vast economic and historic significance.

Those who want a consistent long-term policy must reconcile their agendas, either supporting the rationale of settling space or coming up with an even better unifying purpose of their own. This must happen soon, or NASA’s human space program will sputter to a halt. The committee put it bluntly: “The U.S. human spaceflight program appears to be on an unsustainable trajectory.”

That has been true for some time. In early 2004, President Bush unveiled his strategy for continuing the U.S. space program. Key milestones included completing the ISS and retiring the space shuttle by 2010, developing what would become known as the Orion and Ares I by 2014, and returning humans to the moon by 2020, with long-term but undefined plans beyond that for human missions to Mars.

But Bush failed to provide a clear, unifying rationale for these plans, and they never received full funding. Under a constrained budget, the projects outlined by Bush will take years longer than originally planned. An example is the Ares V heavy-lift rocket needed for human missions to the moon. The current plan calls for it to be ready in the late 2010s, but the committee found that it could not be completed before the late 2020s–and even then there would be no money to develop the necessary lander spacecraft.

Using the Augustine Committee’s rationale, however, we can make a reasonable plan based on the fundamental goal of human expansion into the solar system. With the goal of the space program clarified, money can be better spent and performance can be measured in concrete terms; Congress is far more likely to provide sufficient funding over the long term if it can see along the way that judiciously spent money is yielding tangible results. One of the first, and easiest, decisions to make is to extend the life of the ISS until 2020. If people are going to live and work in space for prolonged periods, we must test technologies and evaluate human performance under those conditions, and the ISS would be the ideal laboratory. Moreover, keeping the station operating will preserve an important international partnership for future missions.

One of the challenges in extending the life of the space station is that once the shuttle is retired, the Russian Soyuz spacecraft will be the only means of transporting crews to and from orbit until Ares I and Orion are ready, theoretically in 2015 (the committee believes that 2017 is more likely). The Augustine report suggests that NASA should get out of the business of shuttling astronauts back and forth and let the commercial sector provide transport to the station. The hope is that companies, serving NASA and other customers (such as space tourists and even other governments), can replace the shuttle sooner and at lower cost than NASA could, freeing up money for exploration.

The report also strongly endorses technology that NASA has largely overlooked to date: in-space refueling. With that capability, we wouldn’t have to develop extremely expensive rockets, like the Ares V, that would be large enough to carry all the propellant needed for a trip to the moon. Fuel tanks–and thus the rockets themselves–could be smaller. Commercial operators could transport propellant and even maintain in-orbit fuel depots. The necessary technologies, the committee found, could be demonstrated in space within a few years.

If America’s space community can’t agree on this approach and thus secure the needed funding, the Augustine Committee concludes, it would be better to stop sending humans into space rather than wasting money and perhaps lives on a program that has no chance of success: “The human spaceflight program … is at a tipping point where either additional funds must be provided or the exploration program first instituted by President Kennedy must be abandoned, at least for the time being.”

Jeff Foust is the editor and publisher of The Space Review.