The 12 Most Beautiful College Campuses Around the World 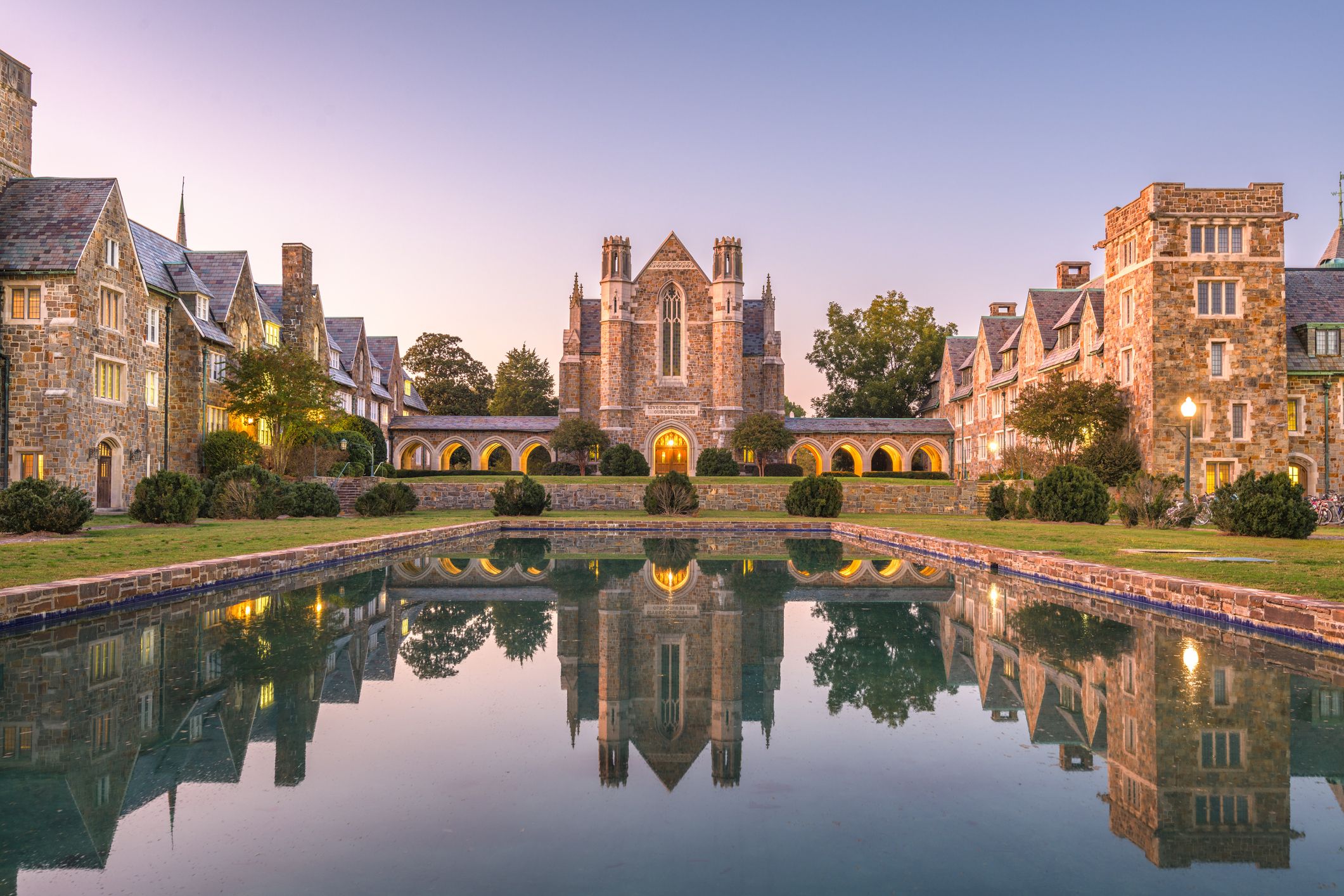 There’s a lot of learning to be done not only in the classrooms of college campuses, but also outside. Universities and academic institutions from across the world play host to some of the most notable architectural masterpieces and astonishing landscapes.

There are very few places where traditional Palladian architecture lives next to modernist theaters or lush woodlands surround Gothic-style halls as seamlessly as college campuses. Each academic building and green space plays an integral role in educating its students and visitors on the history of the college and its region. More importantly, the hallowed grounds help to shape each student into who they are as individuals. While there are many factors that go into selecting the right college, the campus’s ability to inspire creativity and provide refuge should be taken into consideration.

We’ve searched throughout the world to discover the most beautiful college campuses with sprawling grounds that are just as highly regarded as their programs. From the base of Devil’s Peak in South Africa to the rolling hills of Georgia, each of these beautiful college campuses pays homage to its origins while making way for an even brighter future. 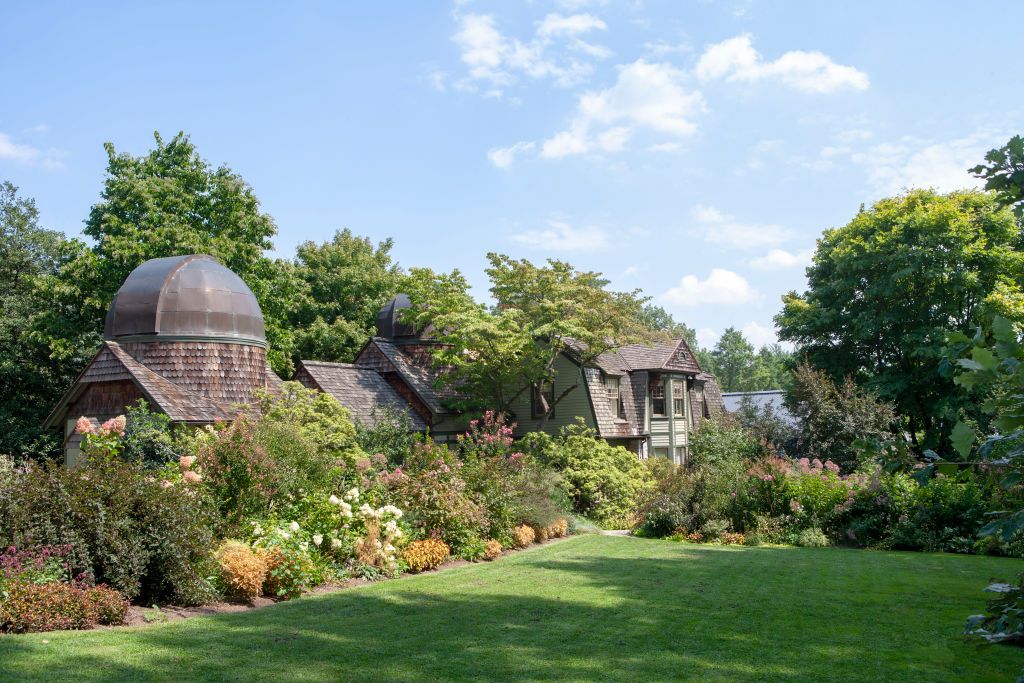 Swarthmore College’s campus boasts an eclectic collection of modern and Collegiate Gothic-style architecture, but there’s one breathtaking element that makes the college stand out: a 425-acre arboretum filled with magnolia trees, hiking trails, and an outdoor theater. Just outside Philadelphia, the college’s green oasis draws the attention of students, locals, and horticulturists from across the world. From the 200 varieties of roses making up the Dean Bond Rose Garden outside Parish Hall to the towering trees of Crum Woods, you’re greeted with a bountiful display around every turn and corner. 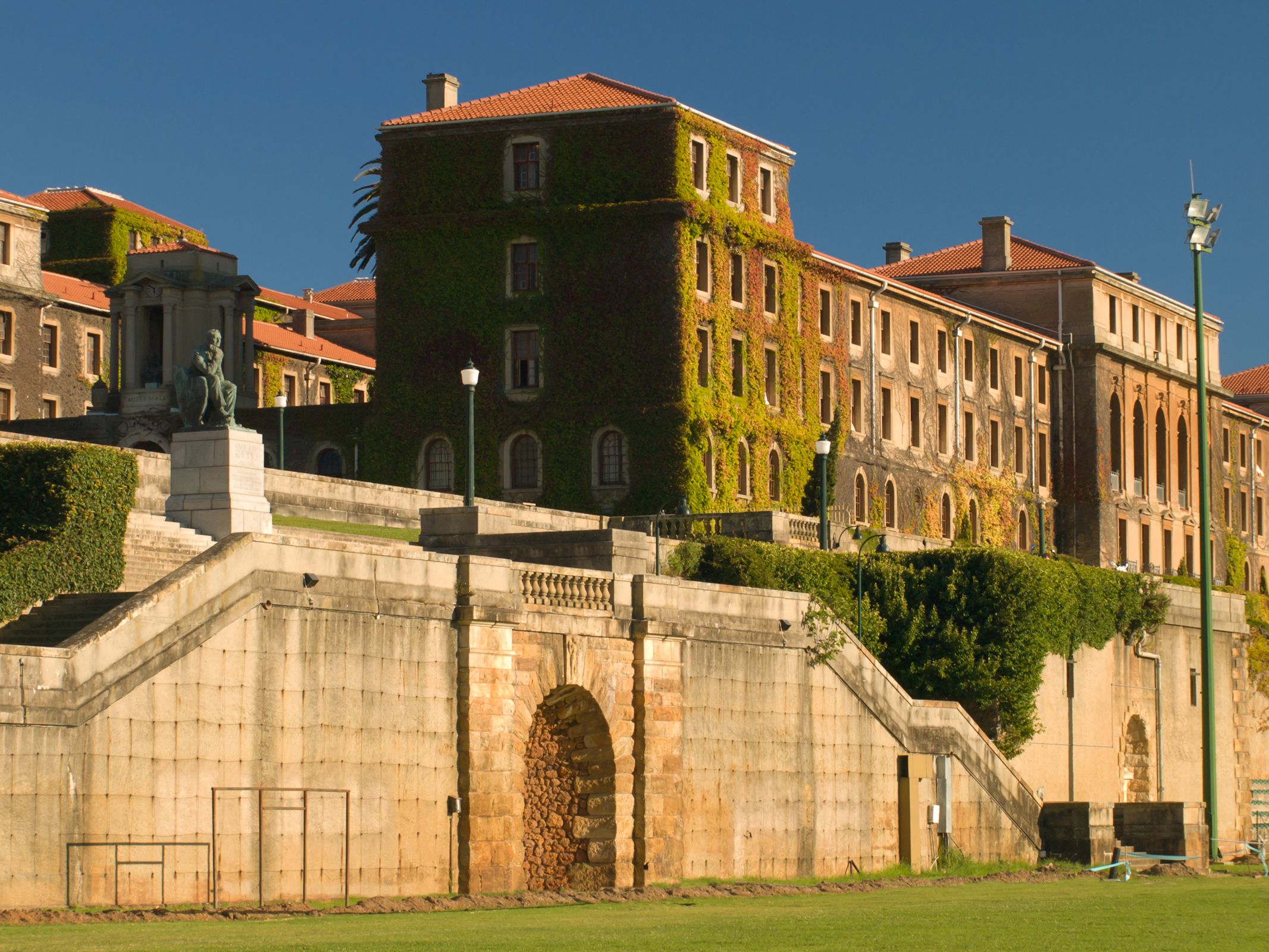 The University of Cape Town is not short on impeccable views with the ivy-covered buildings and dramatic mountains of Devil’s Peak in the background. At the center of campus, Sarah Baartman Hall stands as a sneak peek of the offerings found on the university’s campus.

Nestled in the oldest city in the United States, Flagler College stands an a delightful example of the architectural vernacular associated with St. Augustine, Florida. The liberal arts school is housed in the former Ponce de León Hotel, which was built 1888 as a luxury resort under the direction of businessman Henry Flagler. Much of his original vision remains—including the ballroom, which now serves as a palatial dining hall with Tiffany stained glass windows.

Over its three campuses across Seoul, Kyung Hee University’s classical architecture gives another layer of interest to the ever-evolving city. Fragrant cherry blossom trees guide incoming students toward the regal admissions hall with its Corinthian-style columns and a bubbling fountain. The main campus also houses the Natural History Museum and Hye-Jung Museum.

Walking the campus of this quaint liberal arts college in rural Mount Berry, Georgia feels like you’re visiting the set of a fairytale movie. There’s no short of natural splendor at Berry College, thanks to the more than 27,000 acres of forests, meadows, and lakes surrounding the campus. English Gothic-style academic buildings and serene reflecting pools add to the fantastical quality.

Established in 1290 by King D. Dinis, the “General Study” was first established in Lisbon as a university for the arts, law, common law, and medicine. It moved to Coimbra in 1308, but it did not settle into its permanent residence at a palace overlooking the Mondego River until 1537. Today, the UNESCO World Heritage site’s sun-bleached walls, botanical gardens, and Joanina Library give insight into the country’s academic history.

40 of the Most Beautiful College Campuses in the World 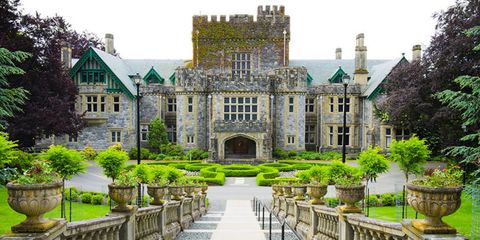 We have a love-hate relationship with school, but a couple clicks through these jaw-dropping campuses and we’re packing our bags and stocking up on XL twin sheets. Read on to learn which universities and college campuses across the globe made our most-gorgeous list. 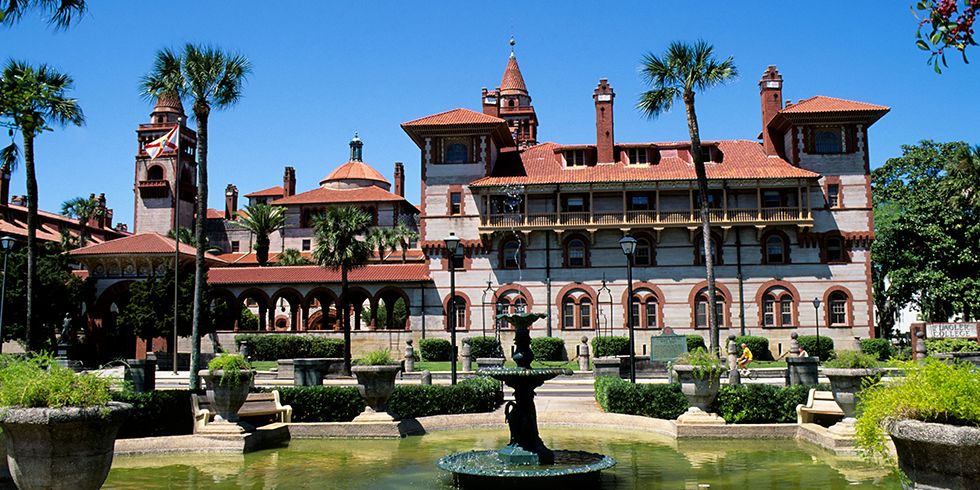 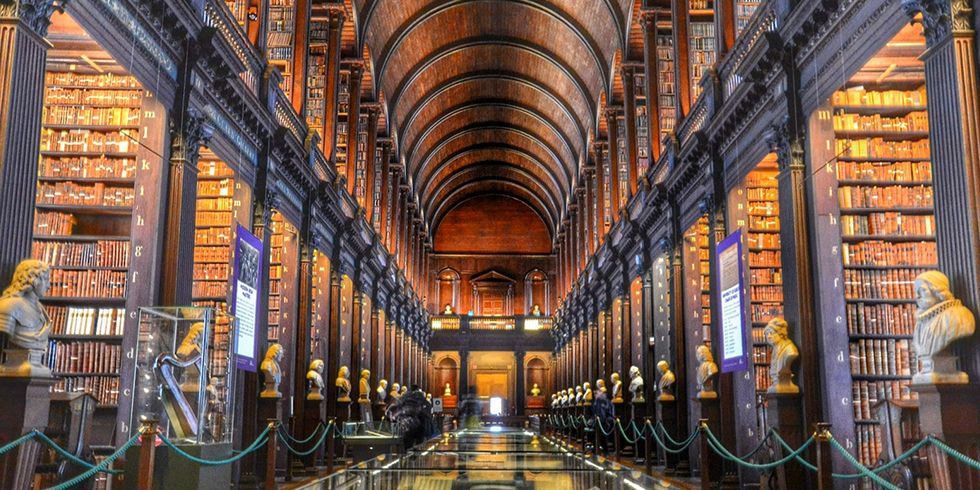 Modeled after the grand collegiate universities of Oxford and Cambridge, Trinity College was founded in 1592 and is one of the seven ancient universities of Britain and Ireland. The college features 25 different schools, so it makes sense that The Library of Trinity College holds more than 6.2 million printed volumes of manuscripts, maps and music. 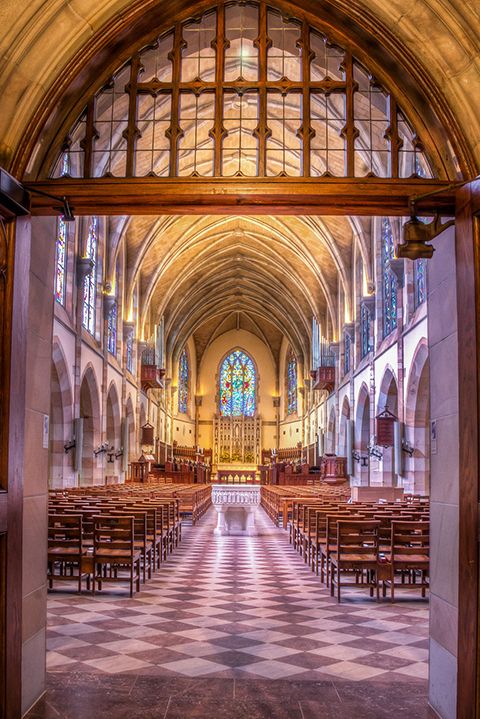 This private, residential liberal arts college is owned by 28 southern dioceses of the Episcopal Church, hence the grandiose All Saints’ Chapel. The university sits on atop sweeping 13,000 acres on the scenic Cumberland Plateau.

This university looks more like a palace fit for Irish royalty than a school for young 20-somethings. The Lanyon Building is noted as one of the most recognizable landmarks at Queen’s University; however, the campus houses more than 250 buildings that resemble this gorgeous Gothic and Medieval style.

Do colleges get better with age? It seems like that’s the case with Princeton. The prestigious Ivy League university was founded in 1746 and is the fourth oldest higher-education institution in the U.S. The main campus sits on approximately 500 acres and incorporates a variety of architectural styles, ranging from High Victorian Gothic to Romanesque Revival.

Founded in 1134, the school is the oldest university in Spain and the third oldest university in the world. The historic town is located west of Spain, between Castilla and León. Although modern renovations have occurred since, the majority of structures still mirror the 2,000-year-old style of Salmantica.

Andrew Dickson White of Syracuse and Ezra Cornell of Ithaca met in the New York State Senate in January 1864 and established Cornell a year later — now that’s what we call networking. The main campus covers 745 acres overlooking the town of Itaca and Cayuga Lake. If city life is more your style, don’t fret — they have a campus in NYC and even a medical campus in Education City, Qatar.

Dartmouth College’s 269-acre campus is located in the heart of Hanover, in the Upper Valley of the Connecticut River. Although there are ongoing construction projects, the majority of the area is designed with the conservative Georgian style in mind. We recommend visiting this school in autumn, because a college campus might just be the best place to study fall foliage!

Sewanee, The University of the South

Sewanee is an Episcopal liberal arts college in Sewanee, Tenn. Its 13,000 acres atop the Cumberland Plateau boasts views of forested mountains. The Gothic Revival architecture and the college’s natural surroundings consistently place Sewanee on lists of the most beautiful college campuses in the United States. 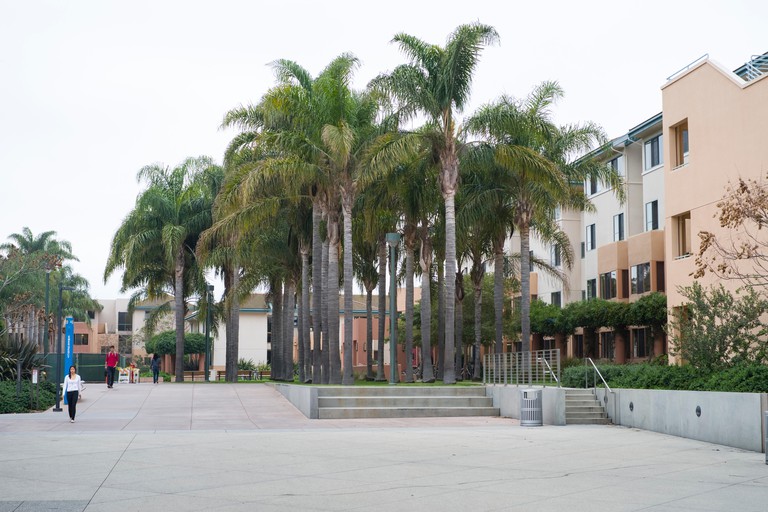 This Jesuit and Marymount university in Los Angeles can be found on the top of Del Rey Hills Bluffs. There are incredible vistas of the Los Angeles Basin, Marina del Rey, Playa Vista, Playa del Rey and the Pacific Ocean. The architecture of the Loyola Marymount University campus blends Spanish colonial influences with modern design, and the campus lawns are artfully manicured and dotted with palm trees.