Visit us in Washington, DC and Chantilly, VA to explore hundreds of the world’s most significant objects in aviation and space history.

Learn how aviation and spaceflight transformed the world.

The lunar module represents one of humanity’s greatest achievements: landing people on another heavenly body.

Apollo 11 was a global event. What did that historic mission mean to you? Share your story and read what others have to say.

Our scientists are involved in current research focused on the Martian climate and geology. Find out what we’re discovering.

Recognize your favorite air or space enthusiast. Add his or her name to the Museum’s Wall of Honor.

We continue to welcome guests to our museums and programs as we closely monitor the coronavirus situation. See our message to visitors. 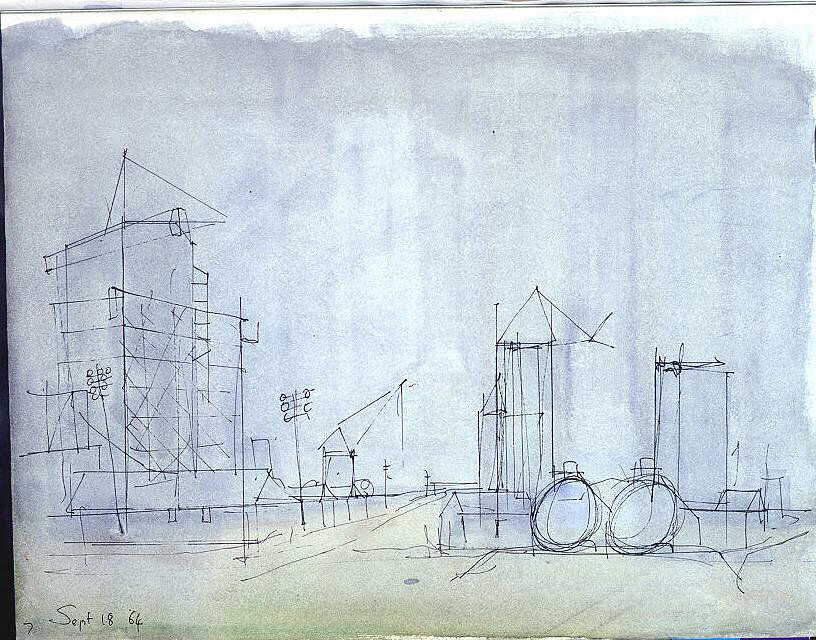 This object is not on display at the National Air and Space Museum. It is either on loan or in storage.

The spring of 1962 was a busy time for the men and women of the National Aeronautics and Space Administration. On February 20, John H. Glenn became the first American to orbit the earth. For the first time since the launch of Sputnik 1 on October 4, 1957, the U.S. was positioned to match and exceed Soviet achievements in space. NASA was an agency with a mission — to meet President John F. Kennedy’s challenge of sending human beings to the moon and returning them safely to earth by the end of the decade. Within a year, three more Mercury astronauts would fly into orbit. Plans were falling into place for a follow-on series of two-man Gemini missions that would set the stage for the Apollo voyages to the moon.

In early March 1962, artist Bruce Stevenson brought his large portrait of Alan Shepard, the first American to fly in space, to NASA headquarters.(1) James E. Webb, the administrator of NASA, assumed that the artist was interested in painting a similar portrait of all seven of the Mercury astronauts. Instead, Webb voiced his preference for a group portrait that would emphasize “…the team effort and the togetherness that has characterized the first group of astronauts to be trained by this nation.” More important, the episode convinced the administrator that “…we should consider in a deliberate way just what NASA should do in the field of fine arts to commemorate the …historic events” of the American space program.(2)

In addition to portraits, Webb wanted to encourage artists to capture the excitement and deeper meaning of space flight. He imagined “a nighttime scene showing the great amount of activity involved in the preparation of and countdown for launching,” as well as paintings that portrayed activities in space. “The important thing,” he concluded, “is to develop a policy on how we intend to treat this matter now and in the next several years and then to get down to the specifics of how we intend to implement this policy….” The first step, he suggested, was to consult with experts in the field, including the director of the National Gallery of Art, and the members of the Fine Arts Commission, the arbiters of architectural and artistic taste who passed judgment on the appearance of official buildings and monuments in the nation’s capital.

Webb’s memo of March 16, 1962 was the birth certificate of the NASA art program. Shelby Thompson, the director of the agency’s Office of Educational Programs and Services, assigned James Dean, a young artist working as a special assistant in his office, to the project. On June 19, 1962 Thompson met with the Fine Arts Commission, requesting advice as to how “…NASA should develop a basis for use of paintings and sculptures to depict significant historical events and other activities in our program.”(3)

David E. Finley, the chairman and former director of the National Gallery of Art, applauded the idea, and suggested that the agency should study the experience of the U.S. Air Force, which had amassed some 800 paintings since establishing an art program in 1954. He also introduced Thompson to Hereward Lester Cooke, curator of paintings at the National Gallery of Art.

An imposing bear of a man standing over six feet tall, Lester Cooke was a graduate of Yale and Oxford, with a Princeton PhD. The son of a physics professor and a veteran of the U.S. Army Air Forces, he was both fascinated by science and felt a personal connection to flight. On a professional level, Cooke had directed American participation in international art competitions and produced articles and illustrations for the National Geographic Magazine. He jumped at the chance to advise NASA on its art program.

While initially cautious with regard to the time the project might require of one of his chief curators, John Walker, director of the National Gallery, quickly became one of the most vocal supporters of the NASA art initiative. Certain that “the present space exploration effort by the United States will probably rank among the more important events in the history of mankind,” Walker believed that “every possible method of documentation …be used.” Artists should be expected “…not only to record the physical appearance of the strange new world which space technology is creating, but to edit, select and probe for the inner meaning and emotional impact of events which may change the destiny of our race.” He urged quick action so that “the full flavor of the achievement …not be lost,” and hoped that “the past held captive” in any paintings resulting from the effort “will prove to future generations that America produced not only scientists and engineers capable of shaping the destiny of our age, but also artists worthy to keep them company.”(4)

Gordon Cooper, the last Mercury astronaut to fly, was scheduled to ride an Atlas rocket into orbit on May 15, 1963. That event would provide the ideal occasion for a test run of the plan Cooke and Dean evolved to launch the art program. In mid-February, Cooke provided Thompson with a list of the artists who should be invited to travel to Cape Canaveral to record their impressions of the event. Andrew Wyeth, whom the curator identified as “the top artist in the U.S. today,” headed the list. When the time came, however, Andrew Wyeth did not go to the Cape for the Cooper launch, but his son Jamie would participate in the program during the Gemini and Apollo years.

The list of invited artists also included Peter Hurd, Andrew Wyeth’s brother-in-law, who had served as a wartime artist with the Army Air Force; George Weymouth, whom Wyeth regarded as “the best of his pupils”; and John McCoy, another Wyeth associate. Cooke regarded the next man on the list, Robert McCall, who had been running the Air Force art program, as “America’s top aero-space illustrator. Paul Calle and Robert Shore had both painted for the Air Force program. Mitchell Jamieson, who had run a unit of the Navy art program during WW II, rounded out the program. Alfred Blaustein was the only artist to turn down the invitation.

The procedures that would remain in place for more than a decade were given a trial run in the spring of 1963. The artists received an $800 commission, which had to cover any expenses incurred while visiting a NASA facility where they could paint whatever interested them. In return, they would present their finished pieces, and all of their sketches, to the space agency. The experiment was a success, and what might have been a one-time effort to dispatch artists to witness and record the Gordon Cooper flight provided the basis for an on-going, if small-scale, program. By the end of 1970, Jim Dean and Lester Cooke had dispatched 38 artists to Mercury, Gemini and Apollo launches and to other NASA facilities.

The art program became everything that Jim Webb had hoped it would be. NASA artists produced stunning works of art that documented the agency’s step-by-step progress on the way to the moon. The early fruits of the program were presented in a lavishly illustrated book, Eyewitness to Space (New York: Abrams, 1971). Works from the collection illustrated NASA publications and were the basis for educational film strips aimed at school children. In 1965 and again in 1969 the National Gallery of Art mounted two major exhibitions of work from the NASA collection. The USIA sent a selection of NASA paintings overseas, while the Smithsonian Institution Traveling Exhibition Service created two exhibitions of NASA art that toured the nation.

“Since we …began,” Dean noted in a reflection on the tenth anniversary of the program, the art initiative had resulted in a long string of positive “press interviews and reports, congressional inquiries, columns in the Congressional Record, [and] White House reports.” The NASA effort, he continued, had directly inspired other government art programs. “The Department of the Interior (at least two programs), the Environmental Protection Agency, the Department of the Army and even the Veterans Administration have, or are starting, art programs.” While he could not take all of the credit, Dean insisted that “our success has encouraged other agencies to get involved and they have succeeded, too.”(5)

For all of that, he noted, it was still necessary to “defend” the role of art in the space agency. Dean, with the assistance of Lester Cooke, had been a one-man show, handling the complex logistics of the program, receiving and cataloguing works of art, hanging them himself in museums or on office walls, and struggling to find adequate storage space. In January 1976, a NASA supervisor went so far as to comment that: “Mr. Dean is far too valuable in other areas to spend his time on the relatively menial …jobs he is often burdened with in connection with the art program.”(6) Dean placed a much higher value on the art collection, and immediately recommended that NASA officials either devote additional resources to the program, or get out of the art business and turn the existing collection over the National Air and Space Museum, “where it can be properly cared for.”(7)

In January 1974 a new building for the National Air and Space Museum (NASM) was taking shape right across the street from NASA headquarters. Discussions regarding areas of cooperation were already underway between NASA officials and museum director Michael Collins, who had flown to the moon as a member of the Apollo 11 crew. Before the end of the year, the space agency had transferred its art collection to the NASM. Mike Collins succeeded in luring Jim Dean to the museum, as well.

The museum already maintained a small art collection, including portraits of aerospace heroes, an assortment of 18th and 19th century prints illustrating the early history of the balloon, an eclectic assortment of works portraying aspects of the history of aviation and a few recent prizes, including several Norman Rockwell paintings of NASA activity. With the acquisition of the NASA art, the museum was in possession of one of the world’s great collections of art exploring aerospace themes. Jim Dean would continue to build the NASM collection as the museum’s first curator of art. Following his retirement in 1980, other curators would follow in his footsteps, continuing to strengthen the role of art at the NASM. Over three decades after its arrival, however, the NASA art accession of 2,091 works still constitutes almost half of the NASM art collection.

(2) James E. Webb to Hiden Cox, March 16, 1962, memorandum in the NASA art historical collection, Aeronautics Division, National air and Space Museum. Webb’s preference for a group portrait of the astronauts was apparently not heeded. In the end, Stevenson painted an individual portrait of John Glenn, which is also in the NASM collection (1963-398).