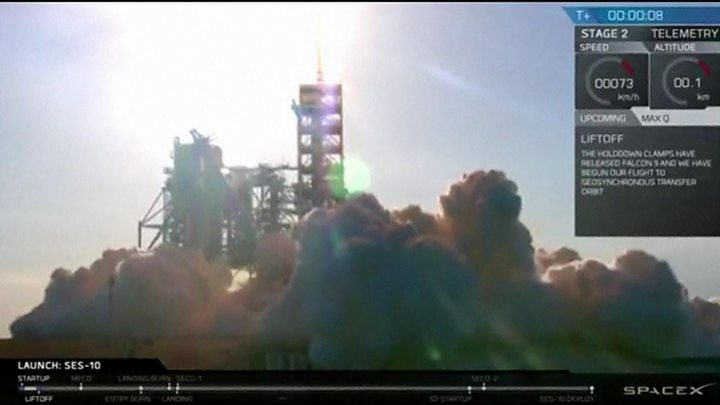 California’s SpaceX company has successfully re-flown a segment from one of its Falcon 9 rockets.

The first-stage booster, which was previously used on a mission 11 months ago, helped send a telecommunications satellite into orbit from Florida’s Kennedy Space Center.

It marks an important milestone for SpaceX in its quest for re-usability.

Traditionally, rockets are expendable – their various segments are discarded and destroyed during an ascent.

The California outfit, in contrast, aims to recover Falcon first-stages and fly them multiple times to try to reduce the cost of its operations.

And to emphasise this point, Thursday’s booster was also brought back under control to land on a barge stationed out in the Atlantic.

“I think it’s an amazing day for space,” said Elon Musk, the chief executive of SpaceX.

“It means you can fly and re-fly an orbit class booster, which is the most expensive part of the rocket. This is going to be, hopefully, a huge revolution in spaceflight.”

The satellite passenger, SES-10, was ejected some 32 minutes later.

This spacecraft is now being manoeuvred by its own thruster system to a position over the equator from where it can deliver TV and telecom services to the Caribbean, Brazil, and other regions in Central and South America.

SpaceX has become adept in the past two years at bringing first-stage boosters home after they have completed their primary task of getting a payload out of the thicker lower-reaches of the atmosphere.

The segments autonomously guide themselves back to the floating platform or a coastal pad to make propulsive landings.

Thursday’s mission was the first time one of these “flight proven” vehicles had been re-launched.

Other landed boosters will now be used on future missions. Another six this year, most likely.

Some customers may still insist on a brand new rocket, but if SpaceX can demonstrate routine, untroubled performance from these second-hand vehicles then satellite operators will get increasingly comfortable with the concept.

Getting away from expendable rockets has been a long quest.

Its white solid-fuel strap-on boosters, for example, would parachute into the Atlantic after each launch. The casings of these boosters were then refurbished and re-used numerous times.

And yet the complexities of servicing the shuttle system after every flight swamped any savings.

SpaceX expects its simpler Falcon 9 rocket finally to deliver a practical commercial solution. It believes its technology will eventually permit rapid turnaround, with boosters flying perhaps 10 times before being retired; maybe even up to 100 times with a certain level of refurbishment.

“With this being the first re-flight we were incredibly paranoid about everything,” Mr Musk said.

“The core airframe remained the same, the engines remained the same – but any auxiliary components that we thought might be slightly questionable, we changed out. Now our aspiration will be zero hardware changes, re-flight in 24 hours – the only thing that changes is that we reload propellant.”

Other players are following close behind. The Amazon entrepreneur Jeff Bezos already has a re-usable sub-orbital rocket and capsule system that he has successfully launched and landed five times.

Mr Bezos now plans a recoverable orbital rocket called New Glenn. And United Launch Alliance, which puts up the majority of America’s national security payloads, is in the process of designing a new vehicle that will return its engines to Earth via parachute.

All this is welcome news for the likes of Luxembourg satellite operator SES, which is having to queue up for rocket rides and wait many months to get its valuable telecoms spacecraft in orbit and earning revenue.

“It’s a big deal for us. If we can get reliable re-usability then we will get better management of the manifest,” said Martin Halliwell, the chief technology officer for SES.

“We made a little bit of history today, actually. We just opened the door to a whole new era of spaceflight,”