ok, sounds interesting! the tourist missions are tough, especially early on. the crew pods don’t have much capacity so it’s difficult to fit more than one occupant on a safe rocket. thinking about what happened to

alilja, I’ll want to make sure that the heat shielding is reliable on anything I send up next.

ok, before we get started with the tourist mission there are a couple of other contracts I want to take on. 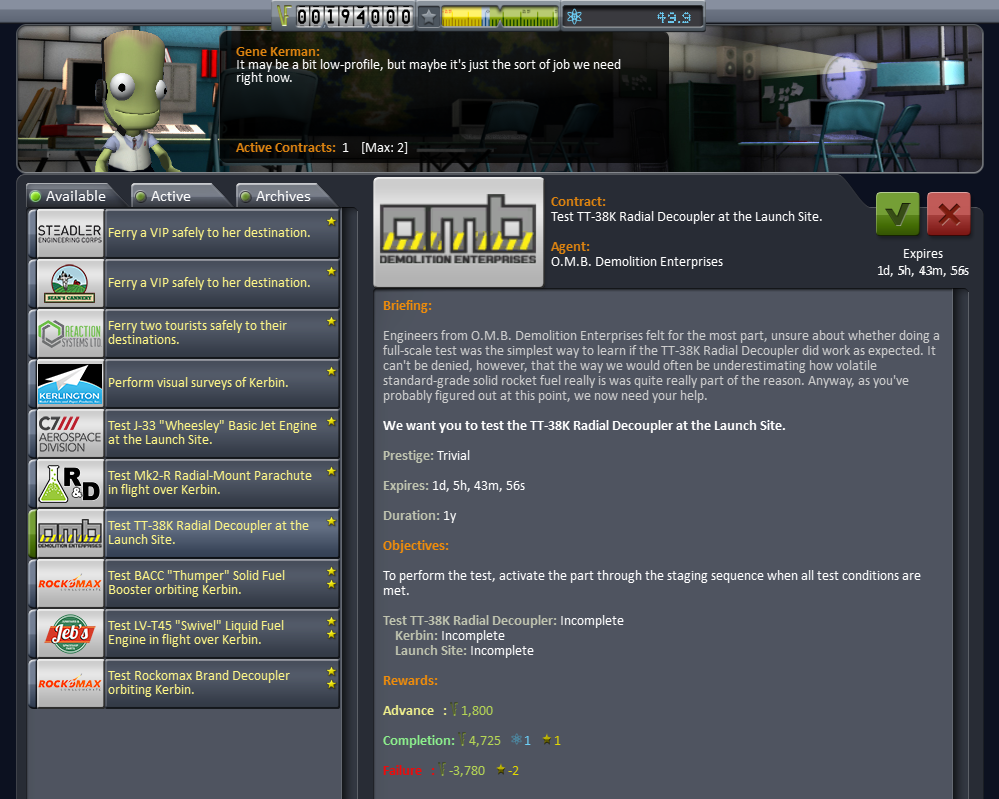 the two I’m interested in are testing the radial decoupler on the launch pad and testing the Wheesley jet engine on the launch pad. these test contracts are great – they give you experimental tech to play around with so you can discover new parts before you’ve researched them. the ones that require you to do it on the launch pad are trivial. having to do it in orbit (like the one for the rockomax decoupler) is much trickier so we’re going to ignore those for now. let’s see what the TT-38K Radial Decoupler is like. 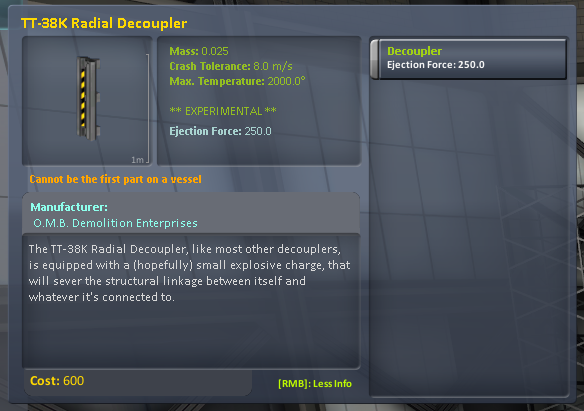 this is a cool part. rather than having to stage everything vertically like we’ve done on the Rundas crafts, we can stage things horizontally. we’ll throw together a prototype craft to see how this could look. 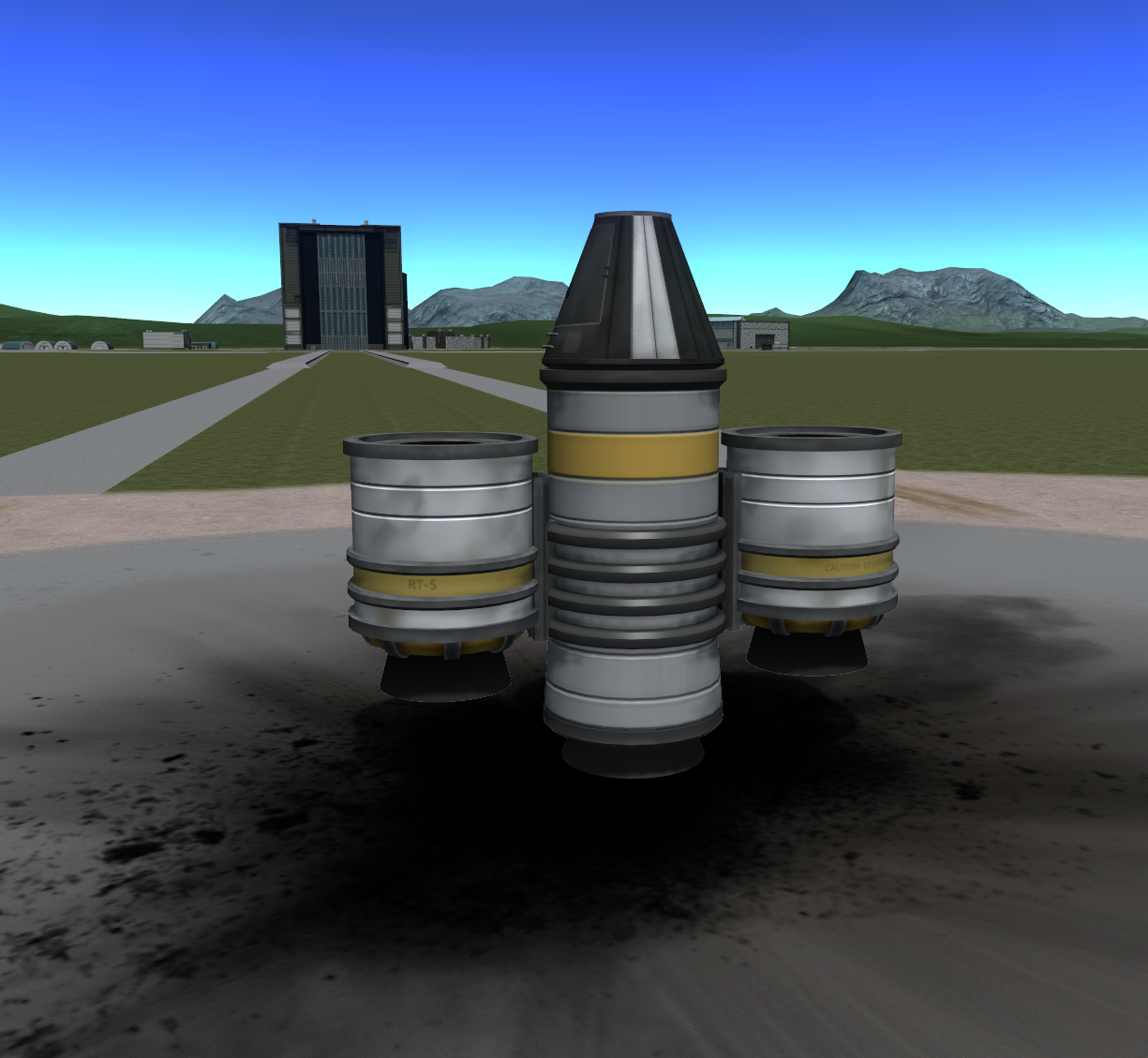 here’s our test craft. if we were going to launch this, the two fleas on the outer stages would separate , leaving the core stage to keep firing. this is useful for exactly the same reason the stack decouplers are useful: we shed spent weight so that the core stage is more efficient.

the staging is set up to just fire the radial decouplers. firing the engines would be disastrous on this craft – it’s got no fins, thrust control or parachutes and so it would almost certainly just squirl straight into the admin building. let’s not do that.

nclm, our pilot for this mission, lets out a sigh of relief as we fail to activate the second stage. the craft remains firmly on the launch pad. today, this is a good thing.

next up is the contract to test the Wheesley jet engine. jet engines are cool – they’re incredibly fuel efficient and can get craft moving incredibly fast when combined with enough lift surface (usually wings). their main drawback is that they only work in atmosphere. because they’re air-breathing, they require constant air intake otherwise they’ll flame out.

unfortunately we don’t have any air intakes yet so the test for this engine is going to be a bit of a disappointment. 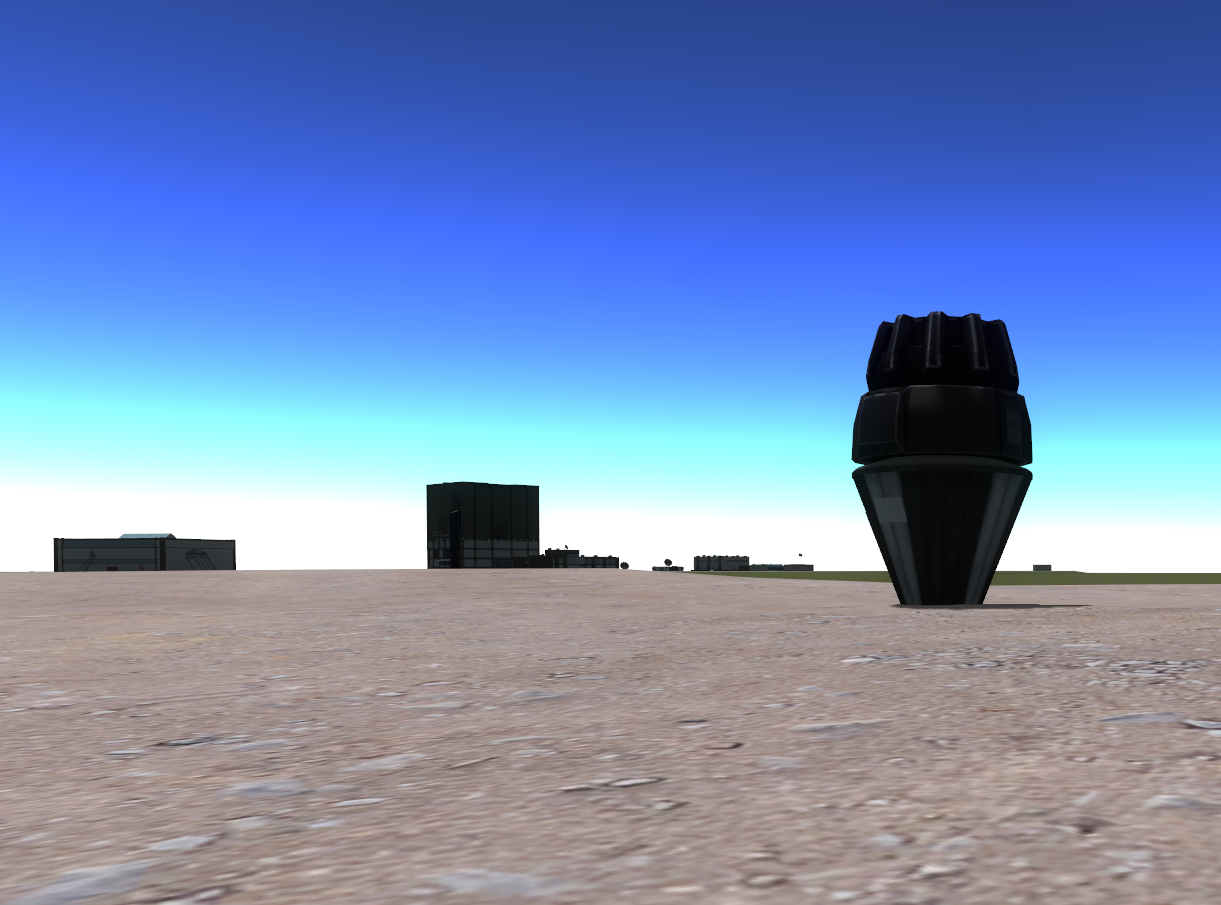 fortunately all we have to do is activate the engine. it’s got no fuel so it’s not going anywhere.

with those two contracts fulfilled we get a nice chunk of space bucks and we go and accept the contract admin requested. 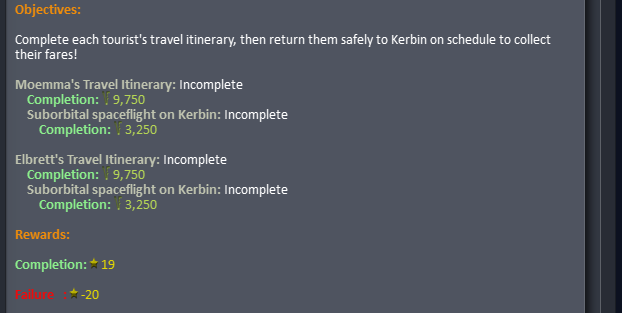 ok. two suborbital space flights. no problem. I mean the last suborbital resulted in disaster but I’m sure this one will be fine. we’ve still got some science to spend so the first thing I’ll do is see what components are going to help us out most.

it’s kind of hard to see but general rocketry gets us the “Swivel” liquid fuel engine, a larger liquid fuel tank and a massive solid fuel booster.

I’m really worried about having another unrecoverable disaster so I’m going to launch a couple of test missions as science craft before we send a tourist up in one of these things. let’s build something that can get into sub-orbit and get safely back down.

so here it is, the Nusku I – named for the babylonian fire god. the hope is that we can flatter the ego of the fire god and not have it explode on re-entry. 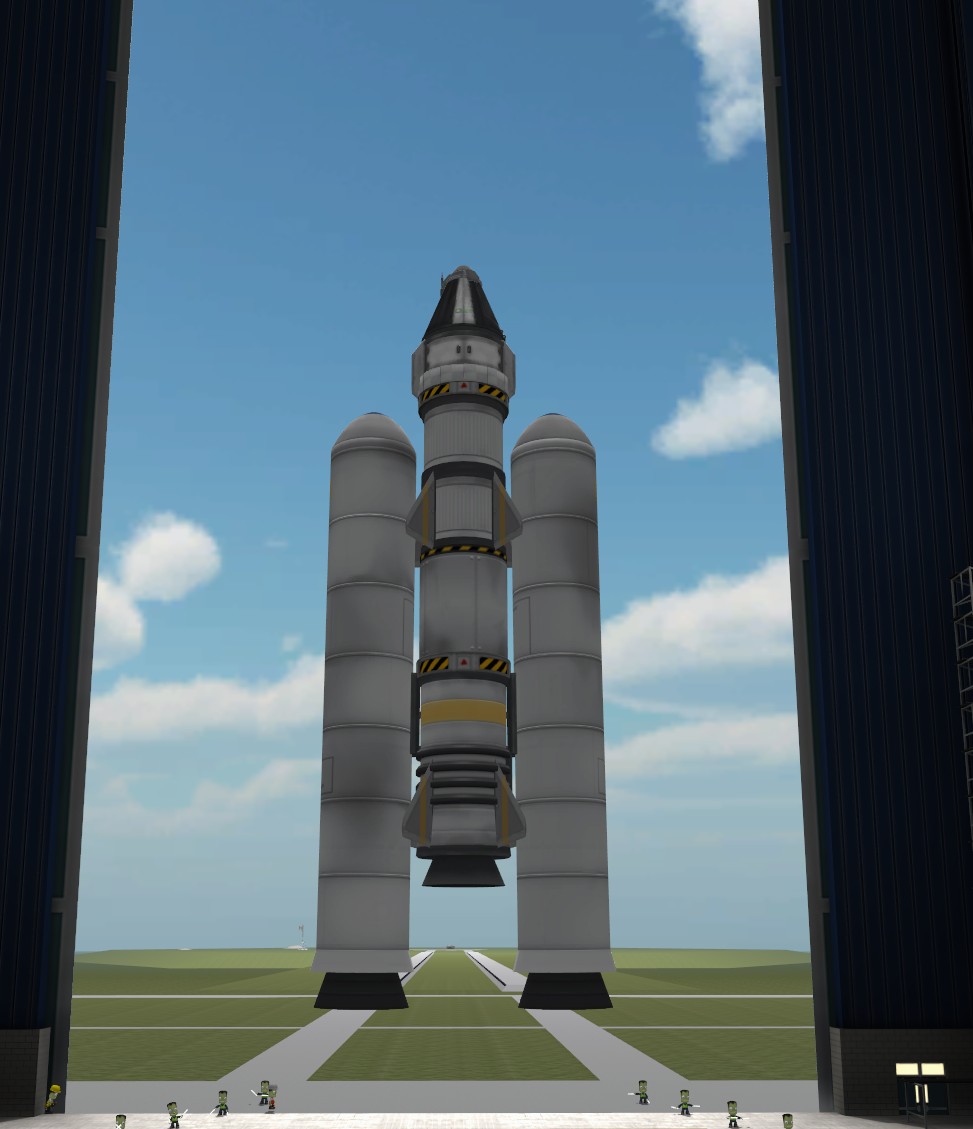 The Nusku is a big step up from the Rundas. let’s go through the stages. 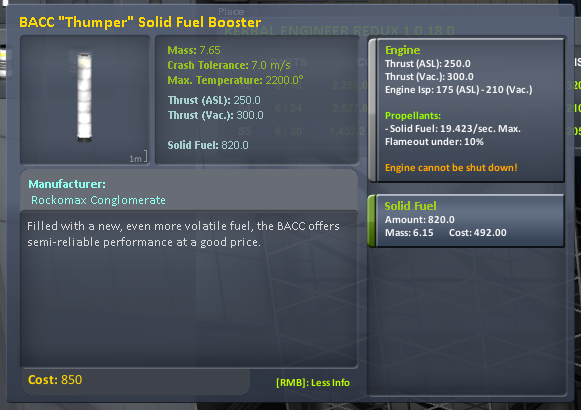 first to fire are two brand-new radially-mounted Thumper engines. these are heavy-duty solid fuel boosters which provide massive amounts of lift. on the same stage, at the very bottom of the craft, you can see the good old Hammer rocket. this will get discarded first, then the two Thumpers on the side. 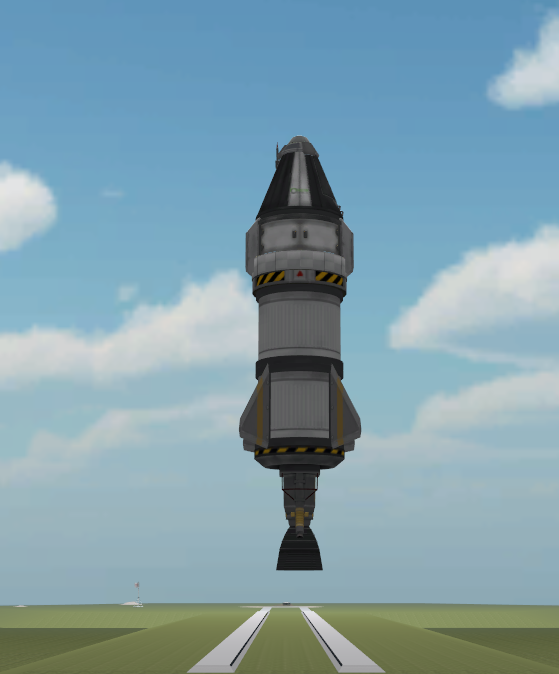 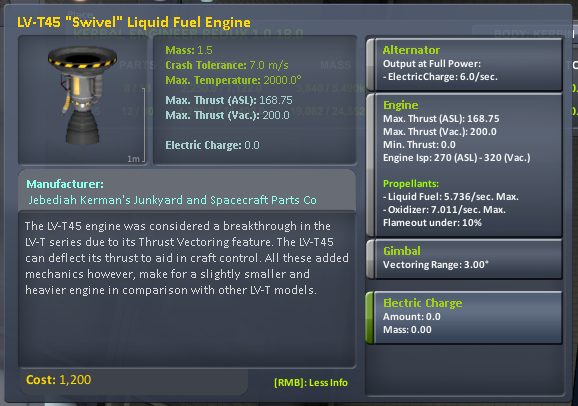 as we’ve mentioned before, liquid fuel engines have controllable thrust so we don’t have to fire them until they’re empty like the solid fuel boosters. the Swivel also comes with “gimballing” – this means we can angle the engine and have the thrust apply in a different direction. this allows us to have some basic control over the craft as we’re firing the engines.

the swivel is fed by two FLT-200 tanks. the total amount of fuel on this craft should theoretically give us enough boost to get into a stable orbit around Kerbin. we’ll see.

the final stage is for the descent. 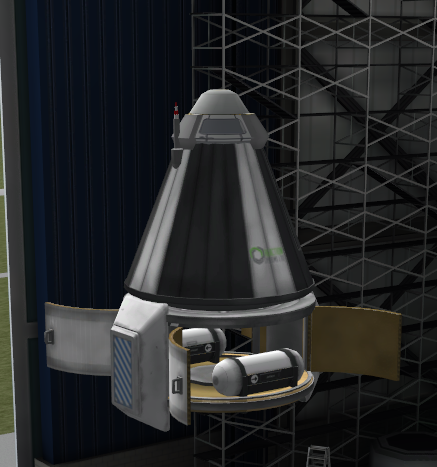 the final stage contains the command pod and underneath it a service bay. these are handy for keeping delicate instruments out of the way of the heat of re-entry and to stop them generating drag on the way up. I’ve fitted two mystery goo containers onto this so we can do some experiments while out in space.

underneath we have a vital innovation: 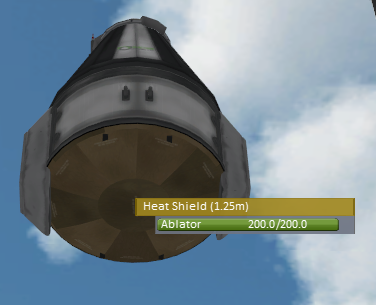 the heat shield provides ablator which will burn off during the descent, hopefully keeping the craft safe from the fate of the Untitled series of craft.

before we can launch the Nusku we have to do some improvements to our launch pad which is currently unequipped to handle such heavy rockets.

it costs most of our funds but the new launchpad looks spiffy as heck. 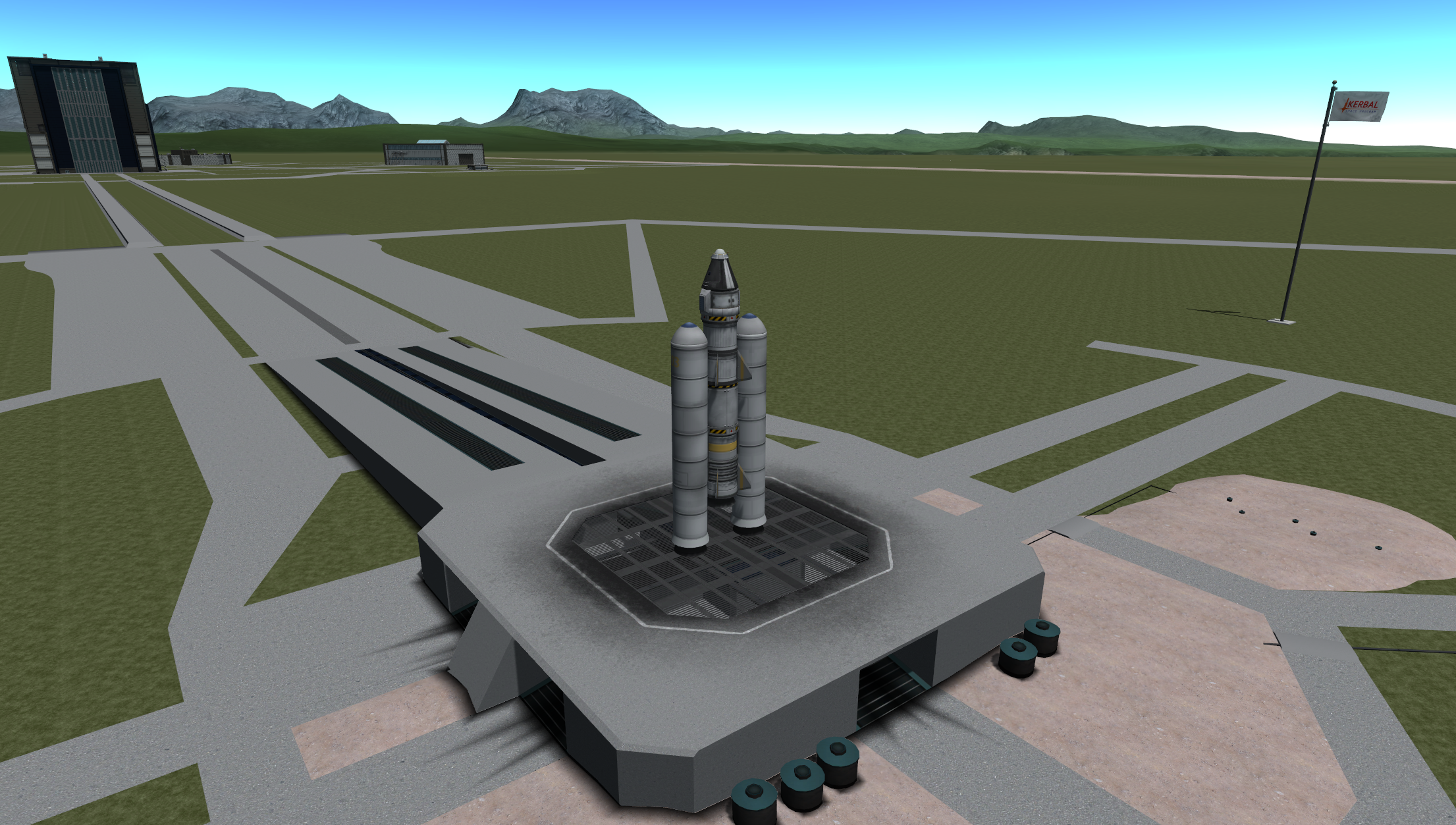 nclm is our pilot for this flight and should be able to keep this thing steady as it ascends.

our flight profile for this will be to tip the craft east a little as it ascends so that we’re not coming it straight down. hopefully this will prevent there being so much heat on re-entry. we’ll see how much fuel there is as we reach apoapse and, if there’s enough, try for an orbital burn.

I check and recheck the staging. everything’s looking good. it’s all down to you now,

it’s looking good. everyone on the ground is just so so anxious about this one.

the Thumper engines turn out to be really strong making the craft impossible to turn until they burn out. at about 12km up we start to see some extreme heating effects but everything’s holding together so far. 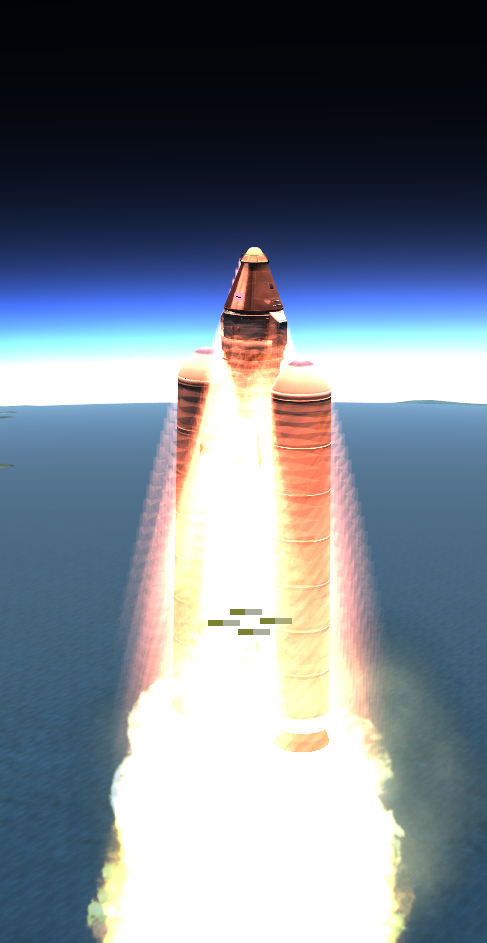 at about 30km the Thumpers finally burn out and we separate the spent lower stage.

the Swivel kicks in and we angle the craft to

45 degrees to start to arc our trajectory. everything’s still in one piece so it’s looking like we might be ok.

a check of our map shows something worrying however. 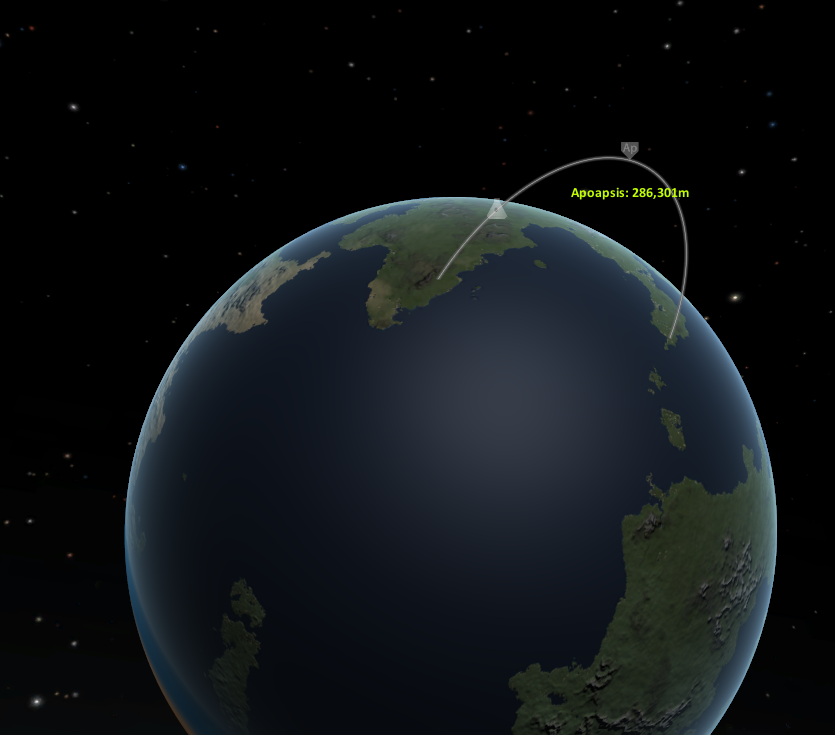 the apoapse is at about 286km which is a similar figure to what we had with the fatal Untitled craft. an ideal apoapse for an orbital flight is at about 100km. this isn’t a disaster yet but it does mean it’s going to cost more fuel to bring the rocket back down.

the reason for this is too much delta-v. delta-v is an expression of how much you can move the craft given the weight of the craft, the thrust from the engines and the remaining fuel. by strapping on those two massive Thumper engines we’ve sent the craft way too high for its weight. the Nusku II will have to address this.

we still have an almost-full tank of liquid fuel and the decision now is whether to circularise our orbit, thus bringing the craft into an elliptical orbit of Kerbin, or start to deorbit it. with such a steep descent and no knowledge of if the ablator will survive, ground decides to try and circularise.

since we’re over uncharted territory,

nclm hops out of the craft for an EVA report. 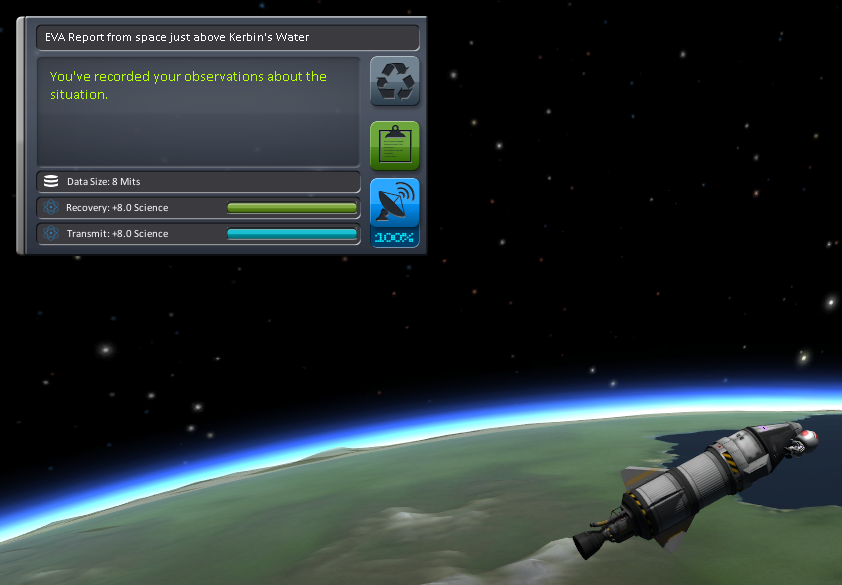 and we examine one canister of goo to see how it’s reacting up here. hopefully this one will come back down successfully. 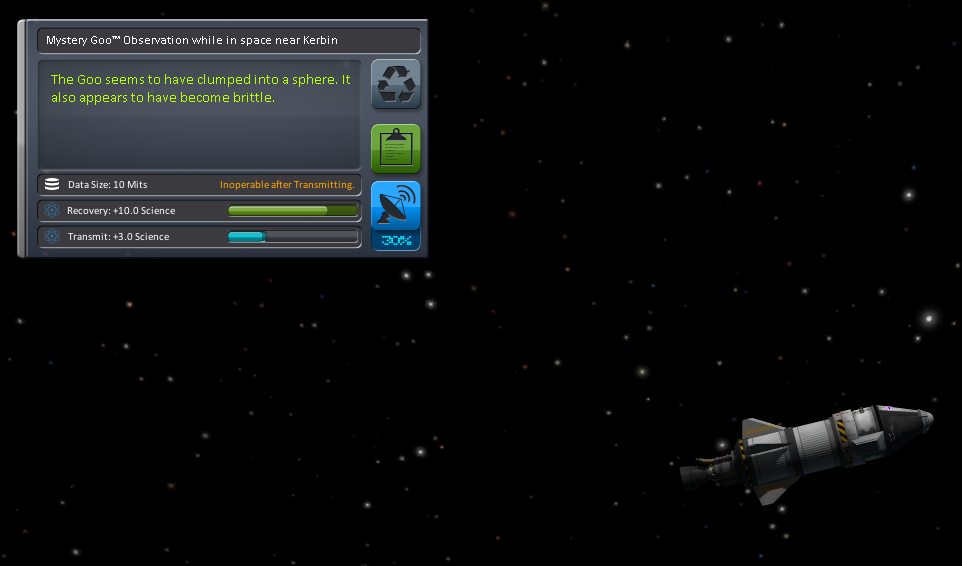 as we near our apoapse, the ground crew do some frantic calculations on the back of napkins, the front of napkins and all over any envelopes they can find. with the delta-v remaining on the craft, there’s no hope of a circulairsed orbit. instead,

nclm should do a short burn at the apoapse to make the descent less steep.

nclm will save a little fuel for corrections as the Nusku comes back down.

nclm reaches space proper he pops the hatch on the second mystery goo. huh. seems like it likes space?

nclm drifts towards the apoapse, they have time to appreciate the view of Kerbin thousands of kilometres below. 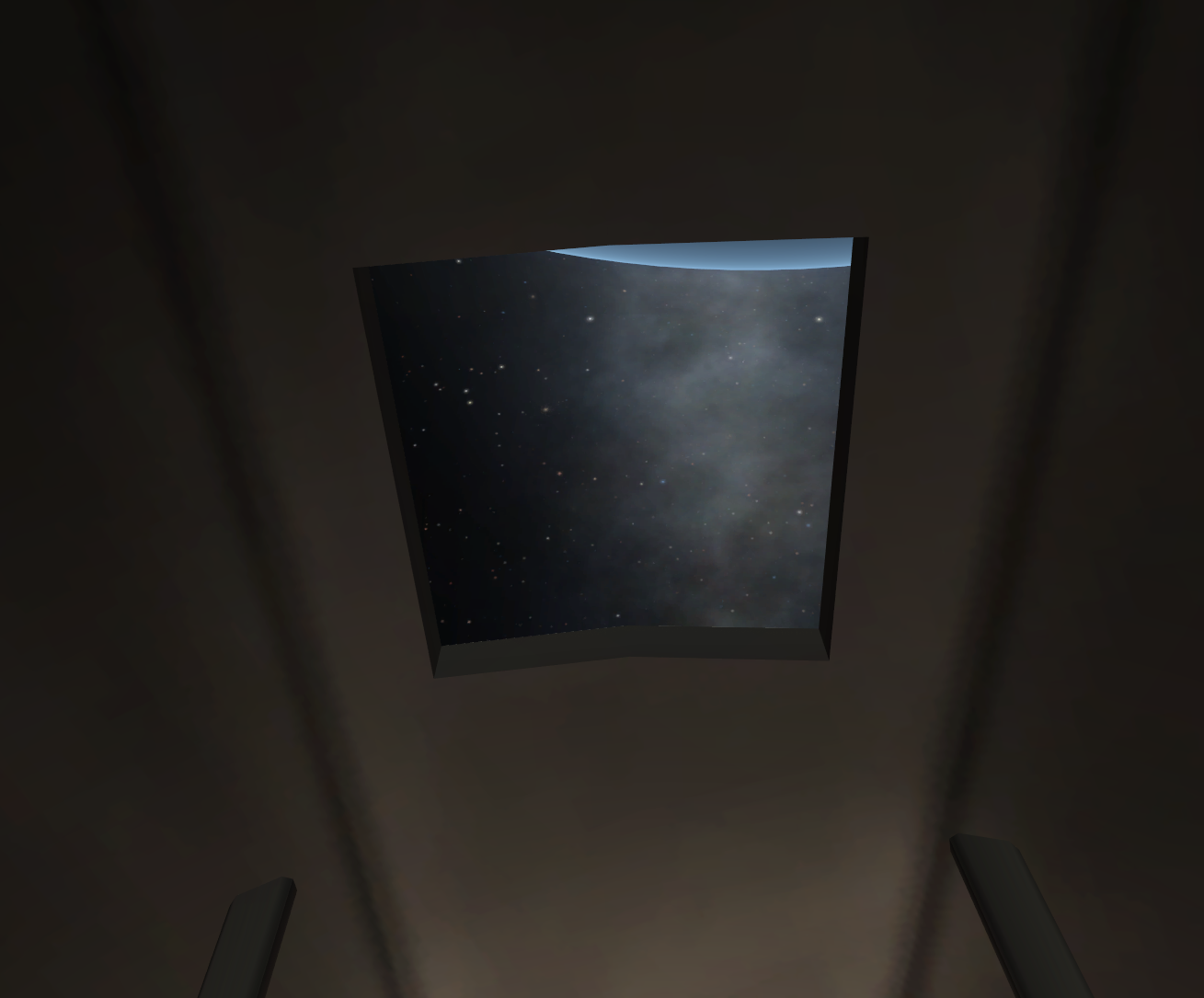 nclm gently eases up the throttle as the Nusku reaches apoapse. they target a landing in the sea. nobody knows if the ablator will hold out. the descent profile looks better than the Untitled.

back on the ground, the crew gather around the comms relay as it crackles to life. beneath the static,

the last recorded transmission from the Nusku is: ‘it’s so quiet up here.’

at about 70km the craft hits the atmosphere and

nclm hits the staging to separate the spent Swivel rocket.

on-board temperature sensors aren’t picking up any of the heat that the previous crafts were seeing. for now the ablator seems to be holding out.

but then just as we’re getting close enough to the ground to be safe, one of the sensors goes critical. one of the goo tanks is close to overheating. an explosion here would destroy the service bay, throwing off the heat shield and leaving the command module to burn up.

but fate (or a Babylonian fire god) is with us today. we kill off enough speed before the container gets chance to explode and the command module continues down towards the surface. at 4km we pop the chutes.

unfortunately the placement of the radial chutes tip the command module up and it ends up with its nose facing the sea. it’s not a problem but

nclm would probably have preferred nto to be deposited back onto earth in such a rude manner.

1000m the cutes deploy and the command module starts its slow descent into the sea.

the ground crew are just so relieved.

nclm has splashed down a little way off the coast of the landmass just east across the bay from the space centre. the neighbouring navy is dispatched with some fresh towels and warm cocoa to go and collect

nclm, the first kerbil to ever return from a sub-orbital space flight. 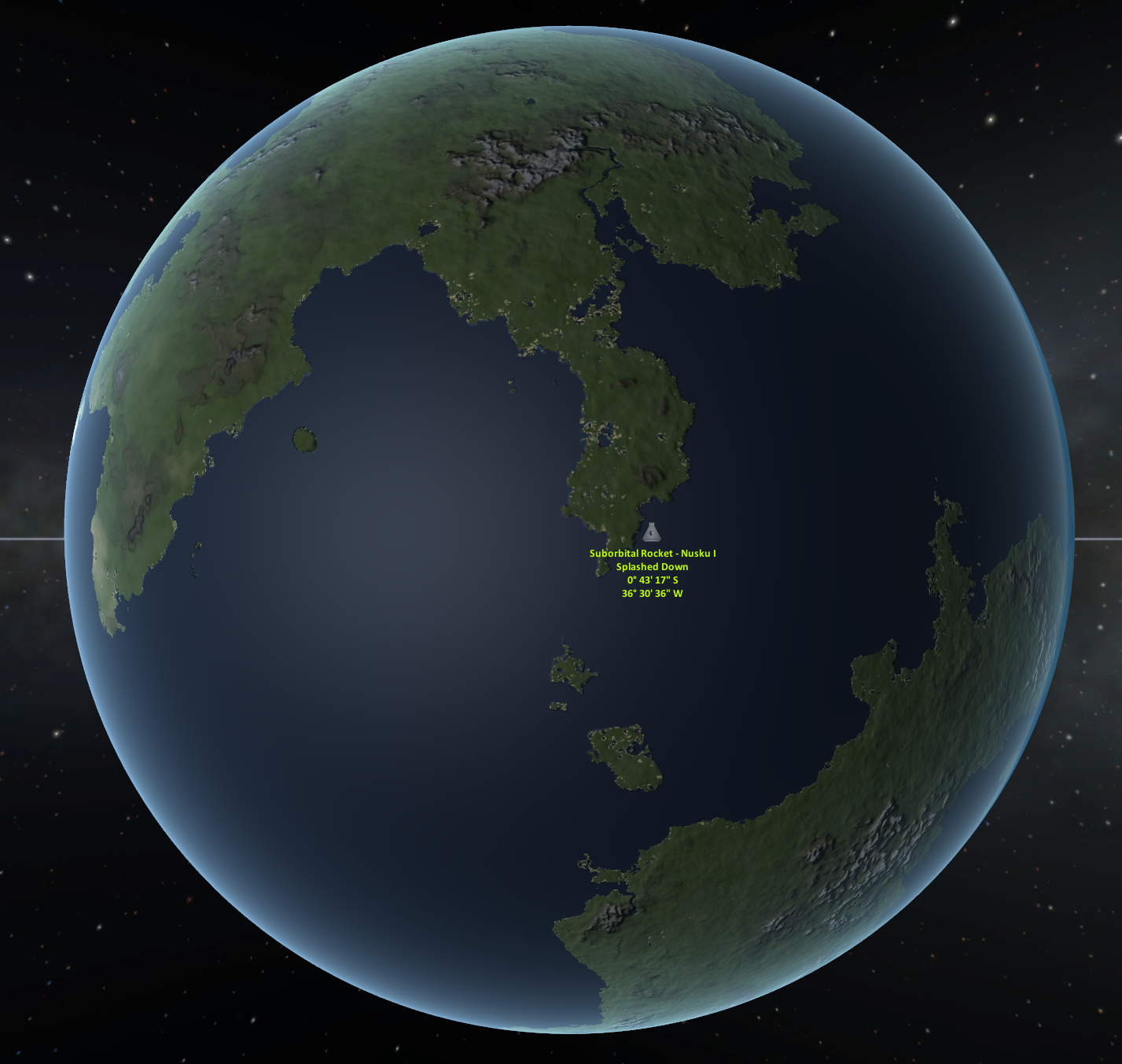 there are lessons to be learnt here though: the Nusku, while an improvement, is too powerful. the outer stages need less thrust and the core stage needs much more fuel. already the R&D department is hard at work on the plans for the next craft in the family, the Nusku II, a suborbital craft designed to comfortably take a passenger into space above Kerbin.

back at the space centre there’s much to celebrate though. 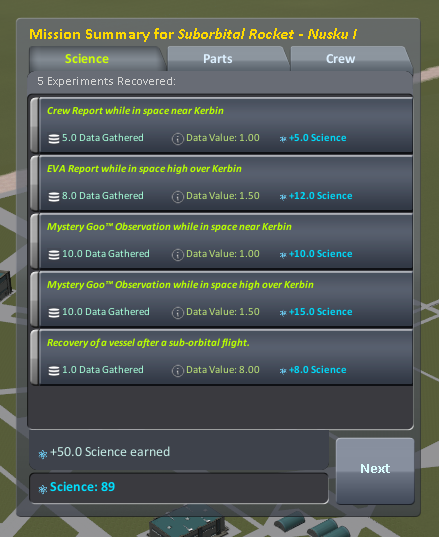 the various experiments and reports from the Nusku gain us another 50 science points, enough to unlock some delicious new tech.

nclm is very much alive and has proved that we have a craft capable of suborbital flights.

and the bank balance isn’t looking too bad – we smashed a couple of distance records on our way over, bringing us up to 77k space credits. the launchpad extension has almost paid for itself!

next time we’ll redevelop the Nusku and attempt to send a civilian into space.