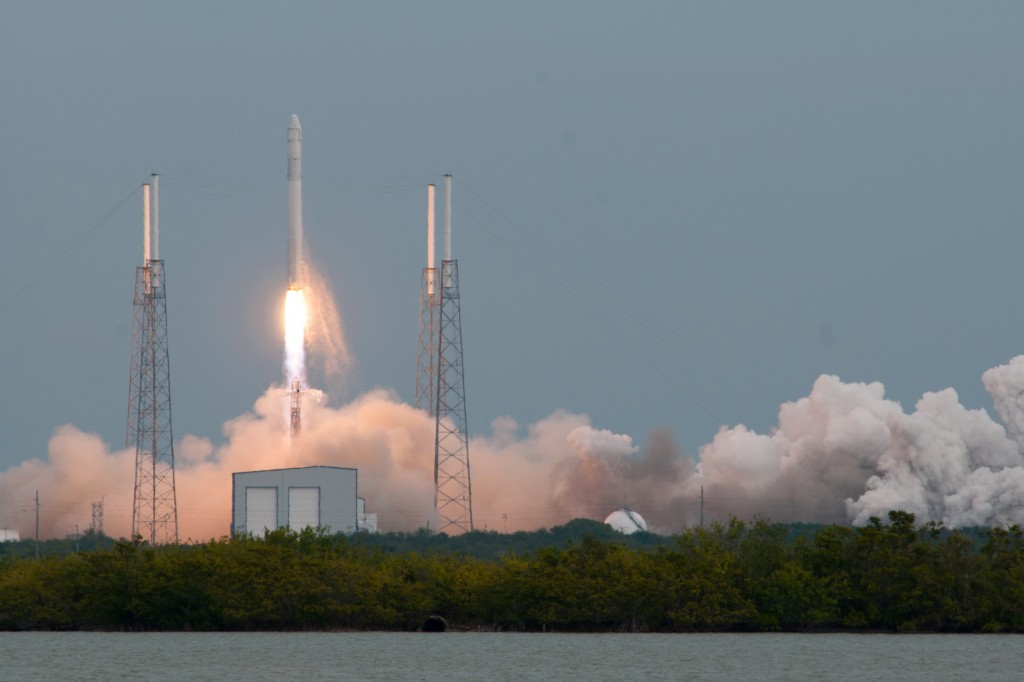 Image courtesy of NASA This morning’s launch of SpaceX’s third Dragon capsule has the twittersphere all a-flutter. Falcon 9’s blastoff from Cape Canaveral initially appeared to be a success. http://www.youtube.com/watch?feature=player_embedded&v=p4lOJjKGoIY Just after the Falcon 9 rocket launched around 10:10 AM EST, SpaceX CEO Elon Musk was tweeting its praises.

Falcon 9 delivered Dragon to its target orbit. All good on the rocket. — Elon Musk (@elonmusk) March 1, 2013

But about half an hour later, things started to get a little messy. “It appears that although it achieved Earth orbit, Dragon is experiencing some kind problem right now,” said John Insprucker, SpaceX’s Falcon 9 product manager on the Spaceflight Now live coverage at Mission Status Center. There was a glitch in the Dragon capsule’s thruster pods, according to an article in the Guardian, and three of the four thruster pods, which guide the spacecraft into orbit, failed to activate.

This stalled deployment of the Dragon’s solar arrays, used to generate power for the capsule, until SpaceX could override the computer, according to a report on NBC.

Within the hour things settled down: The capsule was orbiting Earth with two of its four thruster pods working, en route to dock and drop off over a ton of supplies and science equipment at the ISS.

But two thruster pods are, unfortunately, only two-thirds of the power needed to dock with the ISS. Four hours after take-off, mission control announced that the capsule will not be arriving at the ISS tomorrow as planned. “They are making progress recovering their prop system, but it’s not going to be in time to support the rendezvous and capture for tomorrow,” NASA’s spacecraft communicator told the crew. They are still hoping to attempt a second rendezvous sometime in the next few days. Space station commander Kevin Ford said, as reported Spaceflight Now: “That’s space exploration for you. We sometimes have problems and work through them, and that’s how you learn.” “If not tomorrow, maybe a couple of days down the road we’ll get it licked,” Ford said.