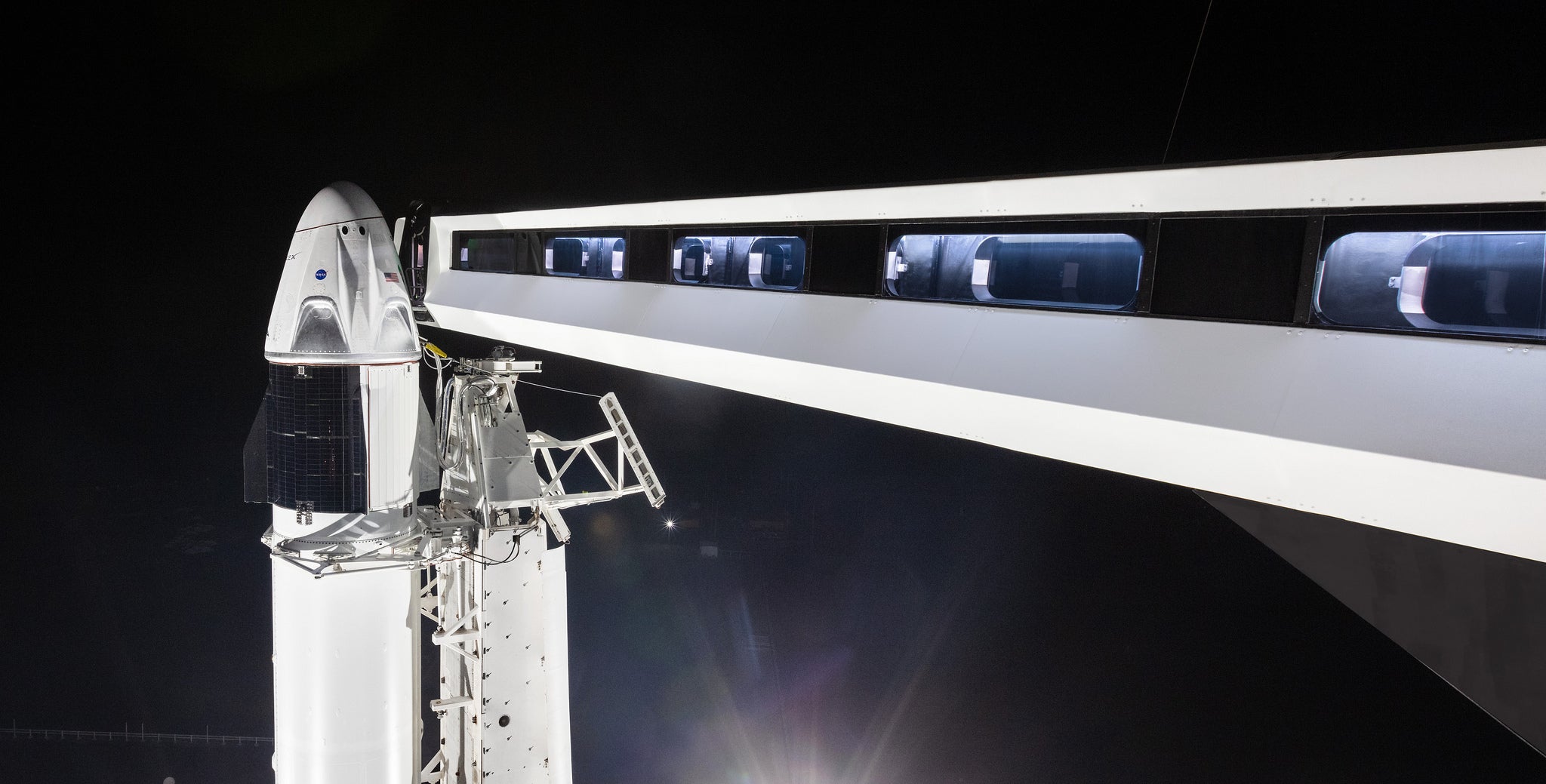 It looks like a big, white bullet—and it will travel much faster. SpaceX, its maker, calls the ship Crew Dragon, and it sits 230 feet above the ground on a Falcon 9 rocket, waiting to lift off from Pad 39A at NASA’s Kennedy Space Center in Florida.

Before dawn on Saturday, if all goes well, Crew Dragon will leave for the International Space Station—one last test flight before it actually carries astronauts for the first time. No U.S. company has ever launched a space traveler into orbit in its own ship before. “It’s great to get that feeling again of getting ready to go flying,” said William Gerstenmaier, NASA’s associate administrator for Human Exploration and Operations, after the final flight readiness review on February 22.

And so what, you say? No fewer than 109 spacecraft have launched from Pad 39A before, and most of them—starting with the Apollo lunar missions and then the space shuttles—were bigger, more powerful and built to take astronauts on more ambitious flights. They just happened to be government projects. “This is a modest step toward flying in space commercially, but you have to underline the word ‘modest,’” says John Logsdon, professor emeritus of space policy at The George Washington University.

That is a fair argument. Crew Dragon is, for now, a government project organized in a different way. But SpaceX and its allies say it is a step toward much bigger things. “This is a huge deal,” says Chad Anderson, the CEO of Space Angels, a $50-million venture capital fund that focuses on space start-ups. “SpaceX ushered in the era of entrepreneurial space. I don’t give them a little credit, I give them a lot of credit.”

The immediate goal, as NASA Administrator Jim Bridenstine puts it, is for “American astronauts to fly American spacecraft from American soil for the first time since the retirement of the space shuttle in 2011”—significant because the U.S. has been reduced since then to renting seats for its astronauts on Russian Soyuz rockets. Assuming this first flight is successful, NASA astronauts Robert Behnken and Douglas Hurley will fly the next Dragon mission in July.

Crew Dragon, 27 feet long and capable of carrying seven astronauts, will only carry about 400 pounds of cargo on this flight, designated Demo 1. It is scheduled to reach and dock with the space station on the day after launch, spending five days there before returning for a splashdown in the Atlantic Ocean off the Florida coast.

It and its booster are meant to be reusable—a crucial aspect of SpaceX’s cost-cutting business model, which treats the company’s multimillion-dollar hardware as investments to be repeatedly reused, rather than as “single-serving” products flown once and then thrown away. The company has posted sensational video of its rockets routinely achieving what used to look like pure fantasy, flying back from space to land safely, tail-first, near their launch sites.

And in the spirit of American enterprise, NASA has arranged for SpaceX to have competition. Boeing, with a similar capsule called the CST-100 Starliner, currently plans an uncrewed test flight in April. If it goes well, astronauts Eric Boe, Nicole Aunapu Mann and Christopher Ferguson are expected to follow in August. (Boe and Mann are NASA astronauts; Ferguson, a former space shuttle commander who retired from NASA, will have the distinction of being Boeing’s first staff astronaut to fly.)

Boeing is a longtime aerospace contractor, and that’s reflected in the contracts NASA made with it and SpaceX. To do fundamentally the same job, Boeing was awarded some $4.2 billion whereas SpaceX was given up to $2.6 billion. The first Boeing launches will use the expendable Atlas 5 rocket, making them inherently more expensive. Considering how frequently launch schedules get rearranged, the Boeing crew could well win bragging rights by flying before the first SpaceX crew does. “The fundamental significance of commercial crew is reestablishing U.S. access to space,” Logsdon says. “It gets us out of relying on the Russians, and that’s important.”

To entrepreneurs like Elon Musk, the colorful, controversial CEO of SpaceX, the larger vision is to bring the skies closer. Think also of Jeff Bezos, the founder of Amazon, who is funding a transformative space transport company of his own, Blue Origin. Or Richard Branson, the flamboyant businessman who has moved from music to airlines to Virgin Galactic—his shot at making suborbital “space tourism” a reality. Other ambitious space companies have come and gone in the last quarter century but few, if any, have embraced a vision as big and bold as Musk’s. He has said his goal is to make us a spacefaring species, with waves of Mars colonists settling there as a backup plan for life on Earth. “What’s different are the companies that are involved, and the way they are capitalized or funded,” says Marco Cáceres, the senior space analyst at Teal Group, an aerospace market intelligence firm. “Twenty years ago, they weren’t as wealthy as Bezos, as charismatic as Musk or as risk-taking as Branson.”

In the early days of the space age, when human spaceflight was part of cold war competition, the big risk-taker was NASA, sending astronauts on dangerous voyages to beat the Soviet Union to the moon. That was reflected in its spending; aerospace companies benefited from the largesse of so-called cost-plus government contracts —essentially guaranteeing they would make money even if they ran far over budget, because each mission was seen as vital to national security. Nobody really knew what space travel was supposed to cost anyhow. When legislators and taxpayers complained, someone always answered that the future of freedom was at stake.

But then Neil Armstrong walked on the moon, and with the space race “won,” NASA struggled for a new direction. Suddenly all the risk-taking was harder to justify. Space vehicles were increasingly designed by committee in hope of making flights safer, but also making them less efficient. New technology, which might have brought costs down, was trumped by tried-and-true established technology. So, although NASA’s space shuttles were intended as cost-cutters, flights remained insanely expensive—and they were still dangerous. The 1986 Challenger explosion brought the shuttle program to a two-year halt and the loss of Columbia in 2003 ultimately ended it.

Anderson says NASA’s problem was systemic. “We’ve been developing space technology for 60 years, mostly funded by government. There have been a handful of contractors—and one customer. The result: we’ve had the opposite of innovation. We went from nowhere to low Earth orbit to the moon—then back to low Earth orbit, and eventually back to nowhere. Things didn’t change until SpaceX.”

The breakthrough, Anderson says, came quietly in 2009. It was not a technological advance or high-profile launch—it was a list. SpaceX published its prices for launching payloads. Now if a company wanted to launch a satellite, it knew how much money to raise, and could plan around it. Before that, he says there were a couple of dozen entrants willing to invest in new space ventures. Since then his firm has counted $18 billion invested by 412 companies.

It is still a tough business. SpaceX struggled for six years to loft its first payload into orbit, and suffered spectacular rocket failures in 2015 and 2016 that cost hundreds of millions of dollars. In January word got out that it was laying off 10 percent of its 6,000-person workforce—a necessary move, SpaceX said, for the “extraordinarily difficult challenges ahead.” One is reminded of a cynical old joke: Anyone can make a small fortune in space—all you have to do is spend a large one.

But the skies have opened for entrepreneurial space, partly because of aggressive businesses like SpaceX, partly because Washington is more welcoming to private enterprise in orbit. Now perhaps the most momentous thing about SpaceX launching astronauts is that it is not really so momentous at all. “The fact that they lowered the price is critical,” says Marcia Smith, president of the Space and Technology Policy Group. “They wowed people with their booster landings. They’ve done things that were very difficult. But they also did it efficiently and at lower cost.”

What to do in space if the cost to get there is no longer insurmountable? Ideas (not necessarily involving astronauts) have—literally—taken off. SpaceIL, an Israeli nonprofit, just launched the world’s first privately developed lunar lander on a SpaceX rocket. Earth-observing satellites, which have often been hulking objects placed in higher orbits passing over a given spot only once a day, are being replaced by lower-flying swarms of smaller, more agile satellites sending real-time readings. And so on.

The single-biggest driver of near-future demand for space business may be internet traffic, Cáceres says: In many cases it is cheaper to transmit data by satellite than over land. There have long been communications satellites in very high orbits, but there’s a noticeable delay in transmitting signals up and back. In 2015 SpaceX announced plans for a broadband network called Starlink, with signals to be sent and received by a low-orbiting constellation of 11,943 satellites. Nobody blinked.

Of course, satellites are simpler and safer to fly than human beings; even Musk has said there is only a 70 percent chance he will someday retire on Mars. To date, governments remain the only entities launching humans into space. Will that change anytime soon?

Smith has her doubts: “Someone would have come along already if there were demand.” John Logsdon is dubious, too: “These companies could in principal fly on their own, but where would they go?”

Far, say Musk and his fellow entrepreneurs. Assuming they are successful, they see themselves taking passengers to Mars—and soon. “They have longevity, long-term vision,” says Teal’s Cáceres. “They see the day when we’re actually living in space. They have limitless amounts of confidence, in space and in themselves.”