Today’s liftoff from Vandenberg Air Force Base in California came off at 10:34 a.m. PT, sending the scorch-marked rocket into clear skies. The mission had been delayed several times over the past couple of weeks, due to concerns about upper-level winds and the need for more pre-launch inspections.

This mission delivered a first for SpaceX as well as for Spaceflight: It marked the first time SpaceX sent the same first-stage booster into space and back three times.

The upgraded Block 5 booster had its previous liftoffs in May and August, and today SpaceX recovered the booster yet again. Minutes after launch, it touched down on a drone ship stationed out in the Pacific Ocean, christened “Just Read the Instructions.”

SpaceX also sent out another ship, called Mr. Steven, to try recovering the rocket’s nose cone in a giant catcher’s-mitt net. Reusing the nose cone, also known as the fairing, could save millions of dollars for each launch.

In a tweet, SpaceX CEO Elon Musk said that Mr. Steven missed the catch, but that the ship’s crew recovered the two halves of the fairing from the water. “Plan is to dry them out and launch again,” he wrote. “Nothing wrong with a little swim.”

This mission for Spaceflight, known as “SSO-A: The SmallSat Express,” broke SpaceX’s record of 18 launches in a calendar year — a record set just last year.

Over the course of several hours, 64 satellites were to be deployed from the Falcon 9’s second stage and from two free-flying spacecraft designed by Spaceflight.

BlackSky’s Global-2 satellite will join Global-1, which was launched just last week on an Indian PSLV rocket. Eventually, BlackSky aims to have a satellite constellation in low-Earth orbit to provide on-demand, near-real-time Earth imagery in a range of wavelengths.

Small satellites like Global-2 typically fly as secondary payloads, subservient to the needs of the mission’s primary payload. Spaceflight’s dedicated rideshare model takes a different approach: Spaceflight purchased the entire launch capacity for a SpaceX Falcon 9, then sold portions of that capacity at retail prices.

“This model lowers the barriers to entry for people that want to get smallsats on orbit, and this enables all kinds of business plans to come to fruition,” Spaceflight CEO Curt Blake explained in a video about the mission.

The satellites on SmallSat Express are all destined to go into a nearly pole-to-pole, sun-synchronous orbit, which is in a stable alignment with respect to the sun and is considered particularly attractive for Earth imaging. 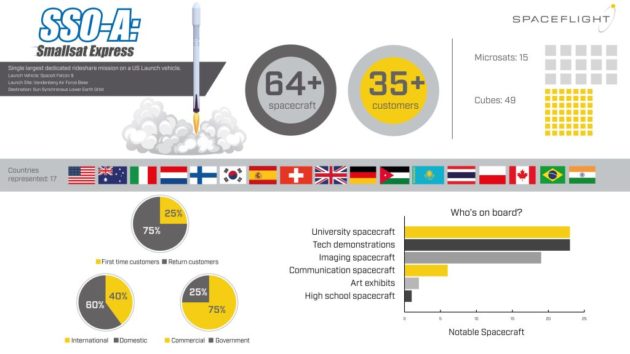 Here are the stats on SSO-A’s sats. Click on the image for a larger version. (Spaceflight Infographic)

Two Planet SkySat remote-sensing satellites were considered the lead customers for SmallSat Express, and three smaller Planet Dove satellites were also placed on board — but there’s a wide variety of other payloads, including:

Today’s 64-satellite launch set a U.S. record for the number of different payloads on a single launch vehicle. The world record is held by India’s PSLV, or Polar Satellite Launch Vehicle, which put 104 satellites (including nine that were signed up by Spaceflight) into orbit last year.

Blake compared the range of options to the assortment of trains, buses, taxis and rideshare vehicles that are available for on-the-ground travel. “We do rideshare on all the different vehicles,” he said.

Meanwhile, SpaceX’s 20th launch of the year is scheduled for Tuesday, when a different Falcon 9 rocket is due to send a robotic Dragon cargo spaceship to the International Space Station from Cape Canaveral Air Force Station’s Launch Complex 40 in Florida.

Update for 5:24 p.m. PT Dec. 3: In a news release, Spaceflight said it successfully launched the 64 spacecraft via the Falcon 9, signaling the end of deployments. “It was a good day,” Spaceflight said in a tweet. Reports about deployments are filtering in from satellite operators as well. Here’s the current roundup:

SpaceX has successfully deployed four microsats and a pair of Spaceflight free-flying deployers in orbit. This ends SpaceX’s role in today’s mission, which is now in the hands of Spaceflight’s free-flyers to release 60 more satellites in the coming hours. https://t.co/paq40MckXs pic.twitter.com/xTKitu3Jhp

Our joint Ghalam-SSTL spacecraft operations team have successfully made contact with KazSTSAT – nominal telemetry received on this first pass. Our thanks to @SpaceflightInc & @SpaceX
Press Release at https://t.co/BsUhTzS6Fn pic.twitter.com/hZ5ow5BR6p

We’ve made contact with the two SkySats, the lead payload on @SpaceX’s SSO-A launch, who have joined the rest of Planet’s largest-ever high resolution fleet. The Doves are up next!

Flock 3s, reporting for duty! Our three Doves have made contact and joined the rest of our 130+ sats in low earth orbit. Thanks for the ride today, @SpaceX and @SpaceflightInc! Read more in our post-launch blog here: https://t.co/pyEFGgNMUi pic.twitter.com/20zn91ZLuu

Telemetry confirms successful deployment of all three of HawkEye 360’s Pathfinder satellites! Thanks to @SpaceX and @SpaceflightInc for a great ride into orbit. #SSOA #smallsatexpress pic.twitter.com/2aNx6U97Lj

Nominal signal received from KAIST’s NextSat-l. Thanks for @SpaceflightInc and @SpaceX. NextSat-I is the first satellite to demonstrate Korea’s small/cube sat technology. Photo is inside the KAIST satellite office. (KAIST=Korea Advanced Institute of Science and Technology) pic.twitter.com/n1j6Tebb7j

All eyes on Audacy Zero, our first satellite in space! This demo mission will test our very own Ka-band satellite radio that we designed and built, as well as our ground station in Napa Valley. Read more: https://t.co/0AgPvqhMGV pic.twitter.com/ZxVZDa0T0Z

Congratulations, high-fives and smiles all around upon hearing that payloads have reached desired orbit on @SpaceflightInc #SSOA #smallsatexpress mission @SpaceX; the #NewSpace community really pulls for one another because it knows how difficult, and rewarding, the work is pic.twitter.com/lYeAMAP0f8

Clarification for 3:23 p.m. PT Dec. 3: Some readers said the headline used on a previous version of this story implied that SpaceX’s Falcon 9 booster had previously flown three times, so we’ve changed it to avoid confusion.