Taking advantage of calmer winds, a SpaceX Falcon 9 rocket vaulted away from the Florida coast and climbed smoothly into orbit Thursday, putting a Dragon cargo ship on course for a three-day flight to the International Space Station. On board: 5,700 pounds of supplies, research gear and holiday gifts for the crew.

It was the first of two space station supply runs in just two days as Russian engineers ready a Progress freighter for launch from the Baikonur Cosmodrome in Kazakhstan early Friday morning. The SpaceX Dragon is expected to reach the lab complex Sunday with the Progress following suit early Monday. 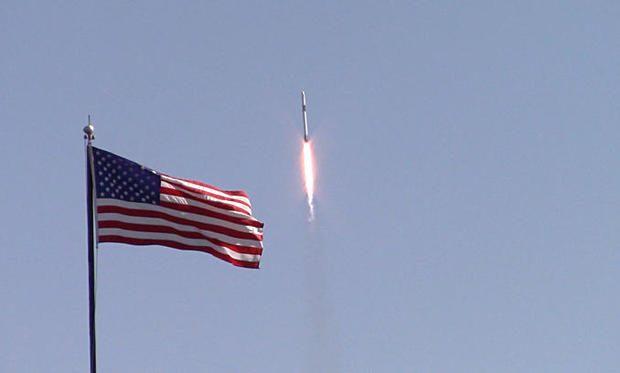 A SpaceX Falcon 9 rocket climbs away from Cape Canaveral, boosting a Dragon cargo ship into orbit for a three-day flight to the International Space Station. Steven Young/Spaceflight Now

“It’s these kind of dynamic events that everybody looks forward to because it really is an opportunity to get some new cargo, some new tools on board and get some new science,” said Kenny Todd, a senior space station program manager at the Johnson Space Center in Houston. “So we’re really excited about this particular time frame.”

Delayed Wednesday by high upper-level winds, the Falcon 9 roared to life at 12:29 p.m. EST and shot away from launch complex 40 at Cape Canaveral Air Force Station, following a northeasterly trajectory directly into the plane of the space station’s orbit.

Two-and-a-half minutes later, the first stage fell away and descended to a touchdown on a SpaceX droneship stationed east of Jacksonville, Florida. The second stage continued the climb to orbit, releasing the Dragon cargo ship seven minutes later.

The Dragon is packed with nearly three tons of crew supplies and equipment, along with science gear and a colony of 40 rodents, including eight genetically modified “mighty mice” that are part of a study to learn more about medications that might help astronauts counteract bone and muscle loss in space. 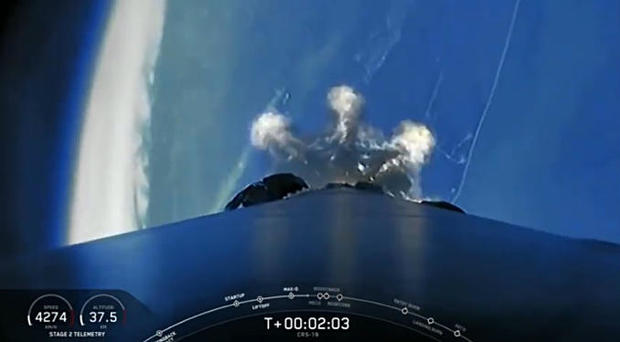 The view from a camera on the side of the Falcon 9 rocket, showing launchpads at Kennedy Space Center and Cape Canaveral Air Force Station on Florida’s east coast. SpaceX

Also on board: an experiment sponsored by beermaker Anheuser-Busch to study the germination of barley in space and an advanced combustion experiment to shed more light on how flames propagate in microgravity.

As for Christmas gifts for the station’s four-man, two-woman crew, “I’m not sure I want to divulge anything,” Todd told reporters earlier this week. “But I think Santa’s sleigh is certified for the vacuum of space.”

With the SpaceX cargo ship on its way, the Russian space agency Roscosmos plans to launch the Progress space freighter from Kazakhstan at 4:34 a.m. Friday (12:34 p.m. local time). On board are 1,433 pounds of propellant, 110 pounds of oxygen, 926 pounds of water and 3,014 pounds of dry cargo.

The Dragon is expected to reach the station Sunday morning around 6 a.m., pulling up to within about 30 feet of the lab complex and then standing by while Italian astronaut Luca Parmitano, operating the station’s robot arm, locks onto a grapple fixture.

From there, flight controllers at the Johnson Space Center in Houston will take over, remotely operating the arm to pull the supply ship in for berthing at the forward Harmony module’s Earth-facing port.

The Progress MS-13/74P spacecraft will reach the station Monday morning, executing an autonomous docking at the Earth-facing port of the Russian Pirs module around 5:38 a.m. 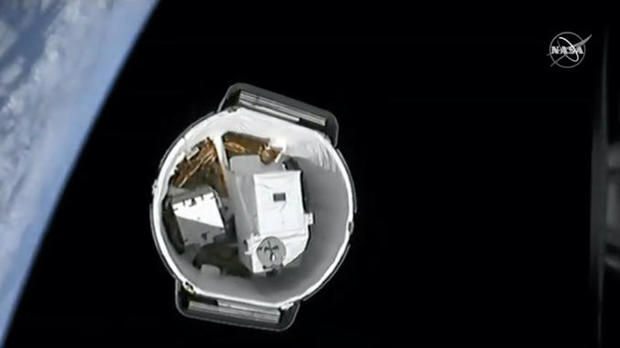 The cargo ship arrivals will set the stage for a flight readiness review next week to clear Boeing’s CST-100 Starliner spacecraft for launch on a long-awaited unpiloted test flight to the station. Liftoff atop a United Launch Alliance Atlas 5 rocket currently is targeted for December 19 with a landing in New Mexico on Christmas Eve.

NASA is counting on Boeing’s Starliner and SpaceX’s Crew Dragon capsules to end the agency’s sole reliance on Russian Soyuz ferry ships to carry astronauts to and from the space station. NASA astronauts have not been able to launch aboard U.S. spacecraft since the space shuttle’s retirement in 2011.

Boeing and SpaceX are both required to launch unpiloted test flights before initial missions with astronauts aboard. SpaceX completed an uncrewed flight to the station earlier this year, and Boeing’s upcoming mission should set the stage for both companies to launch initial piloted test flights in the first half of 2020.