SpaceX is launching a Dragon cargo ship for NASA tonight. Here’s how to watch live. 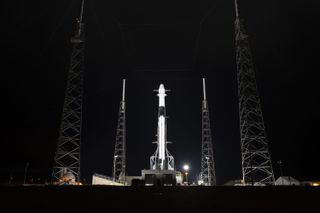 CAPE CANAVERAL, Fla. — SpaceX will launch its 20th Dragon cargo mission for NASA tonight (March 6) and you can watch it all live online.

The private spaceflight company will use a veteran Falcon 9 rocket to launch the uncrewed cargo craft from Pad 40 at Cape Canaveral Air Force Station in Florida at 11:50 p.m. EST (0450 GMT on Saturday). Tucked inside the Dragon is more than 4,300 lbs. (1,950 kg) of supplies bound for the International Space Station.

The mission marks the final flight for SpaceX under its first commercial resupply services contract with NASA. The contract, which was signed in 2008, was valued at $1.6 billion and covered a series of Dragon flights delivering a minimum of 44,000 lbs. (20,000 kg) of cargo to the space station.

Today’s flight will mark the final time this version of the Dragon spacecraft will fly; future resupply missions will feature SpaceX’s upgraded Dragon 2 capsule. The first of those flights is expected to launch in October 2020.

The human-rated version of the Dragon 2 craft, also known as Crew Dragon, made its debut one year ago as it flew to the International Space Station as part of a demonstration mission (called Demo-1) for upcoming crewed flights. In 2014, SpaceX and Boeing snagged a coveted launch contract collectively worth $6.8 billion to each build a spacecraft capable of transporting astronauts to the space station and back.

Both versions (crewed and uncrewed) of the upgraded Dragon will launch from Pad 39A, a switch from current launch procedures that utilized Pad 40 at Cape Canaveral Air Force Station to send the cargo capsules into orbit.

According to company officials, the current version of Dragon can fly up to three times, whereas the upgraded version can fly as many as five times. SpaceX will also be changing up its recovery operations for future cargo missions, and scooping the Dragon out of the Atlantic. (Currently, Dragon splashes down in the Pacific Ocean.) The switch will allow for faster processing times.

Dragon 2 also comes with some different skills than its predecessor. Now, instead of berthing with the station via robotic arm, Dragon will be able to dock itself to the orbital outpost. As part of the Demo-1 mission last year, Dragon was tasked with proving it could autonomously dock and undock itself with the station.

Following that successful test, SpaceX demonstrated that the capsule’s built-in launch escape system performed as expected and could keep astronauts safe in the event of an emergency during flight.

That step, which took place earlier this year, was the last major hurdle the company needed to clear before it could launch people. The next flight of the Crew Dragon is expected to happen as early as May. Two astronauts — Doug Hurley and Bob Behnken — will fly to the space station as part of the Demo-2 mission. NASA is still trying to determine how long their stay might be.

Weather conditions are predicted to be 60% favorable for Friday night’s launch attempt, according to the U.S. Space Force’s 45th Weather Squadron, which performs weather assessments for space launches. (Currently, the primary concern is strong liftoff winds.)

Clear skies are predicted around liftoff, which should provide onlookers with a clear view of the launch and the landing. For this launch, SpaceX is attempting to recover the first stage booster at its landing zone at Cape Canaveral Air Force Station.