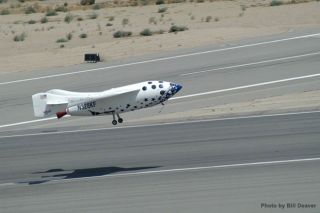 A major turning point for private spaceflight occurred on June 21, 2004, when SpaceShipOne, the first nongovernmental crewed spacecraft, flew 62.5 miles (100 kilometers) above Earth’s surface. In doing so, the vessel crossed a boundary called the Kármán line, the accepted point of entry to space as defined by the International Astronautical Federation. After two more flights in 2004, one on Sept. 29 and another on Oct. 4, the piloted vehicle won the $10 million Ansari X Prize for repeated flights in a privately developed, reusable spacecraft.

SpaceShipOne was a space plane designed and fabricated by Scaled Composites, a company owned by aerospace designer Burt Rutan. The ship’s development was backed by the deep pockets of billionaire Microsoft co-founder Paul Allen in a joint venture named Tier One, whose objective was to develop technology for low-cost routine access to space.

SpaceShipOne was 28 feet (8.5 meters) long. The cigar-shaped fuselage was about 5 feet (1.5 m) in diameter and could carry a pilot and up to two passengers. The plane had short, wide wings with a 16-foot (5 m) span. Large, vertical tail booms were mounted on the end of each wing. During re-entry, the rear half of the wings folded upward, increasing drag while maintaining stability; then, the wings were moved back into gliding position for landing.

The spacecraft was launched in midair, at an altitude of about 50,000 feet (15,000 m), from the underside of its mothership, White Knight, a turbofan-powered airplane. After SpaceShipOne glided for a few seconds, hybrid rocket motors on it fired for 80 seconds to loft the craft just beyond the atmosphere. SpaceShipOne arced through space for about 3 minutes and then glided back to Earth without making a complete orbit around the planet, otherwise known as a suborbital flight.

SpaceShipOne made 17 flights in all. Spaceflight was achieved on the 15th flight. Test pilot Michael Melvill was at the controls for that momentous trip, and he later became the first licensed commercial astronaut.

After the first flight into space, the ship made two more flights before being retired from active service. The ship set the following records during its last two flights:

Pilot Mike Melvill has some fun celebrating his successful private suborbital flight atop SpaceShipOne, as the tow vehicle pulls it to the general viewing area. (Image credit: Mike Massee)

In 2009, five years after the success of SpaceShipOne, Rutan rolled out a new version of the spaceliner, called SpaceShipTwo, and its carrier plane, WhiteKnightTwo. This venture was backed by British entrepreneur Richard Branson and his commercial spaceflight company, Virgin Galactic. SpaceShipTwo is manufactured by The Spaceship Company, a fully owned Virgin subsidiary that used to be jointly owned between Virgin and Scaled Composites. (Virgin became the sole owner in 2012.)

SpaceShipTwo is designed to fly two pilots and six passengers on short, suborbital spaceflights that travel more than 62 miles (100 km) above Earth, offer a few minutes of weightlessness and then return to a runway landing. Tickets for SpaceShipTwo flights currently cost $250,000 apiece.

Branson initially promised customers that Virgin Galactic would fly them into space by 2007, but the company has yet to do so and has not offered a new date. During many years of development, the SpaceShipTwo team encountered issues such as development delays, a fatal ground explosion in 2007 and a fatal crash of VSS Enterprise during a test flight in 2014.

However, SpaceShipTwo prototypes have successfully executed a number of powered flights (which means using the engine’s propulsion, as opposed to gliding). On Dec. 13, 2018, the VSS Unity test vehicle reached an altitude of 51.4 miles (82.7 km). That’s a little higher than the boundary of space, as defined by the U.S. Air Force, but still below the Kármán line.