This article originally appeared in the August 19, 2019 issue of SpaceNews magazine under the title “Herding cubesats: Spaceflight’s SSO-A mission a logistical headache.”

The concept of large-scale rideshare missions, where dozens of cubesats or other smallsats are launched on a single rocket, has clear benefits for some smallsat users. Because larger launch vehicles usually have lower costs per kilogram of payload than small vehicles, users can get cheaper prices for launching smallsats, provided that rideshare mission is going to their desired orbit at their desired time.

A case in point is the SSO-A mission organized by Spaceflight Inc. and launched on a SpaceX Falcon 9 in December 2018. Spaceflight purchased the entire Falcon 9, rather than excess capacity that might be available for secondary payloads, allowing it to carry 64 satellites for 53 customers, including U.S. government agencies, companies and other organizations.

That manifest was “constantly changing” in the months leading up to the launch, recalled Jeffrey Roberts, who managed the SSO-A mission at Spaceflight, during a presentation at the annual Conference on Small Satellites at Utah State University Aug. 7. “We knew that we were going to have customers that were changing in and out. We didn’t quite anticipate as many as we did,” he said.

A manifest that changed on a weekly basis, he said, required a flexible approach to accommodating the payloads as they joined or left the mission. There were ultimately 22 changes to the architecture of the mission, and a far larger number of engineering tests and customer reviews.

The launch itself, he said, went as expected. “All planned deployments occurred,” he said, done in a carefully choreographed sequence to prevent the satellites from colliding with one another.

There was, though, a last-minute change to those plans. One customer, he said, had its cubesat locked in its dispenser, remaining attached to the payload adapter. “They were unable to get the appropriate licensing,” he said. “They swore they were going to get it, and we integrated them under the condition that they have to show their licensing. They didn’t, so we sealed the container.”

Spaceflight didn’t identify that satellite, but industry sources said it was Elysium Star 2, a one-unit cubesat from Elysium Space, a company that offers to fly cremated remains into space. Thomas Civeit, founder and chief executive of Elysium Space, confirmed their satellite remained attached to the payload adapter. “Elysium Space did receive a license for its cubesat but I guess Spaceflight made its decision based on multiple factors, which included its relationship with all the agencies involved in the process,” he said Aug. 13.

However, he added that he was satisfied that the cubesat made it to space. “Everybody wanted to find an effective way to achieve the mission objective, having our ash capsules in Earth orbit, and this was a good way to do it.”

The complexity of the mission did pose problems regarding identifying and tracking satellites. Roberts said four of the cubesats failed to make contact after deployment. Eight others, he said, remain “unclaimed” in that their operators have yet to notify the U.S. Air Force’s Combined Space Operations Center (CSpOC) which of the objects it’s tracking from the launch is their satellite.

Roberts said later that unclaimed cubesats aren’t necessarily dead, only that their operators, for whatever reason, haven’t contacted CSpOC. “There needs to be a discussion about how to enforce cooperation with CSpOC,” he said. “Spaceflight is exploring options to strongly encourage compliance.”

HOW TO TRACK YOUR CUBESAT

Satellite operators often struggle to figure out which satellite is theirs, especially right after launch. On a rideshare mission with dozens of satellites deployed around the same time and the same orbits, determining which satellite is which can be a challenge, making it difficult to determine which one to transmit commands to. 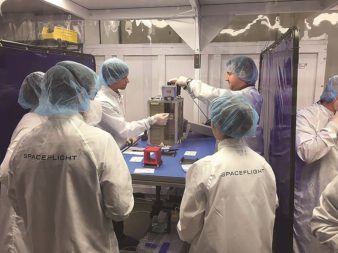 “We’re not against doing another SSO-A type mission. If the market demands it, we know how to do it.” Jeffrey Roberts, Spaceflight’s SSO-A mission manager. Credit: Spaceflight

It can also be a race against the clock. “The first 24 hours after you launch are critical,” said Kasandra O’Malia of Millennium Engineering and Integration (MEI) during an Aug. 4 presentation at SmallSat. “You need to make contact with your spacecraft as soon as you can to address any anomalies.”

MEI was supporting a U.S. Coast Guard mission called Polar Scout that flew two sixunit cubesats on the SSO-A flight. They were able to identify their satellites within a day of launch thanks to a network of ground stations; using their best estimate of the orbits of the satellites, they transmitted commands whenever the satellites were expected to be in range. When the satellites received the commands and started transmitting, sending back data from GPS receivers on board, they were able to refine the orbits.

While that approach allowed them to contact and identify the two satellites within a day, they waited 20 days before formally notifying CSpOC. “We were super-confident that we had identified which of the IDs were us,” she said of finally contacting CSpOC, citing past experience of misidentifying satellites that were “not trivial” to correct with the Air Force.

The Technical University of Munich also used radio transmissions to identify its MOVE-2 cubesat on SSO-A. Sebastian Rueckerl said the satellite could have been one of several objects in the CSpOC tracking data. His team was able to determine which one was MOVE-2 by measuring the Doppler shift of its transmissions as it passed over a ground station and comparing it to the expected Doppler shifts from each of the candidate objects. The measured signal “perfectly matched” the expected signal from one of the objects.

Other approaches, though, don’t rely on the radio transmissions from the satellites itself, offering a potentially more robust way to identify a satellite that might have problems transmitting, or not designed to transmit at all.

Two of those approaches — each described by their developers as “license plates” for cubesats — flew on separate missions in late 2018. SRI International developed the CubeSat Identification Tag, or CUBIT, as a small add-on to cubesats that transmits a signal identifying that satellite. The system, weighing only about 20 grams, is designed to operate independently from the rest of the cubesat, including its own battery.

“In essence, CUBIT is a radio-frequency license plate for cubesats,” said Samson Phan of SRI in an Aug. 8 conference presentation. “It allows us to provide each cubesat a unique ID.” 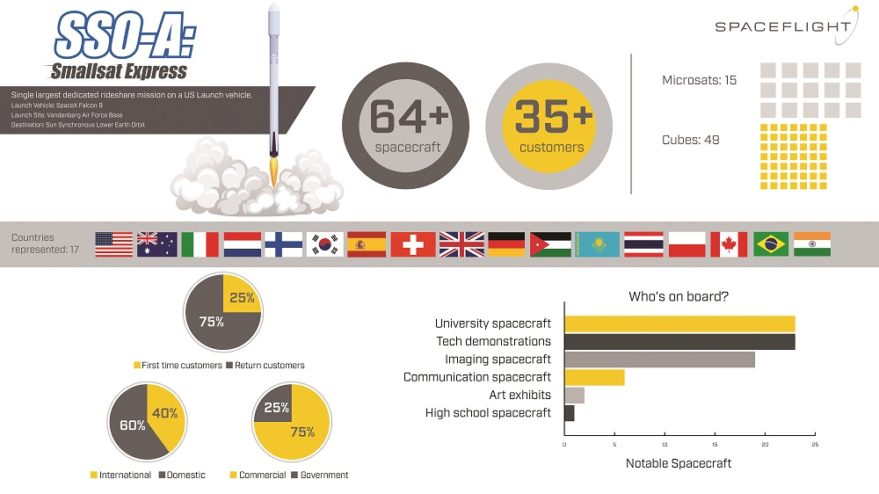 SRI worked with two organizations flying “passive” cubesats that lacked radios on SSO-A to incorporate CUBIT into their satellites. One of them was Elysium Star 2, which was not deployed from its dispenser. The other was Enoch, a threeunit cubesat developed by the Los Angeles County Museum of Art featuring a bust of the late African American astronaut Robert Lawrence Jr.

Phan said they got a signal from the CUBIT on Enoch the day after launch, confirming that the satellite had been deployed. A month later, SRI detected the CUBIT signal from Enoch again, allowing them to link Enoch to a specific object in the CSpOC catalog. “CUBIT actually works,” he said.

Los Alamos National Lab tested a different cubesat license plate, called the Extremely Low Resource Optical Identifier (ELROI), on another cubesat called NMTSat that launched on a NASA-sponsored Rocket Lab Electron launch in December 2018. ELROI flashes a pattern of lights identifying the satellite that can be detected by small telescopes on the ground.

The student-built NMTSat was equipped with radios, but failed to contact ground stations following launch. David Palmer of Los Alamos said in an Aug. 8 conference talk that they tried to look for the optical signal from the ELROI on the cubesat based on the orbital elements of the various unidentified objects associated with the launch, but failed to see anything.

“Maybe ELROI is not working, or maybe we just need to look harder, so we’ll look harder,” he said, adding that the lab will fly ELROI devices on two other cubesats in 2020.

Smallsat developers see promise in both CUBIT and ELROI, although both are still experimental. “I don’t think there’s anything that’s really COTS — ready offthe-shelf — at the moment,” said O’Malia, “but I anticipate that, in the next two to five years that these will be commonplace. We’ll be putting something on our cubesats that will probably allow CSpOC to identify those spacecraft much quicker.”

As for Spaceflight, the company doesn’t have plans for a mission similar in scale to SSO-A for the near future. “Keeping 50-plus customers on one mission is extremely hard,” Roberts said, with the company instead focusing on smaller rideshare missions.

But, he added, “we’re not against doing another SSO-A type mission. If the market demands that, we know how to do it.”