Share All sharing options for: The biggest rocket launches and space missions we’re looking forward to in 2018 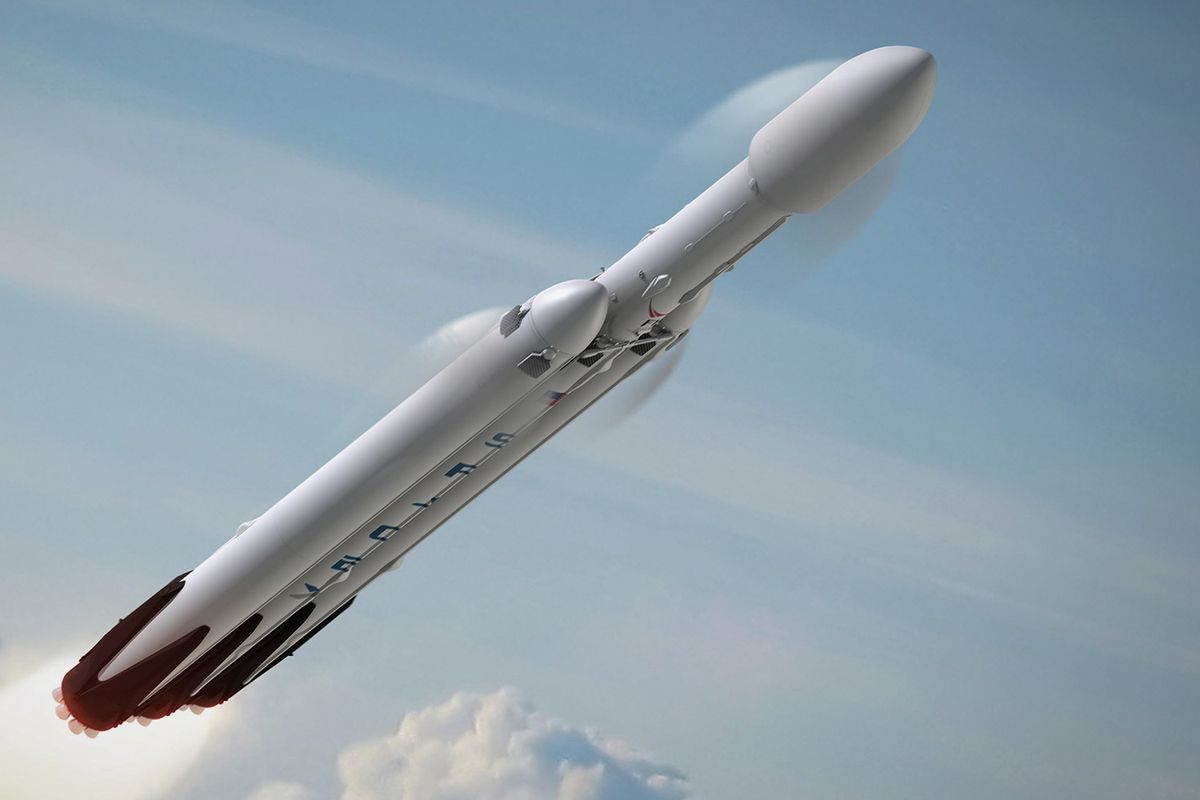 Next year is already overflowing with exciting missions to space. NASA is launching a new lander to Mars, as well as a spacecraft that will get closer to the Sun than ever before. And two of NASA’s vehicles already in space will finally arrive at their intended targets: one will rendezvous with a nearby asteroid, while another will pass by a distant space rock billions of miles from Earth.

But it’s not just NASA that has a busy year ahead; the commercial space industry has a number of significant test flights planned, and the launch of one of the world’s most anticipated rockets, the Falcon Heavy, is slated for early 2018. And if all goes well, people may finally ride to space on private vehicles.

Here are all the missions and tests we’re looking forward to in 2018 and when you can expect to see them take off.

SpaceX CEO Elon Musk first announced plans for the giant Falcon Heavy rocket in 2011 — a vehicle consisting of three reusable Falcon 9 rocket cores strapped together. Originally, the Falcon Heavy was due to launch in late 2013, but the vehicle’s inaugural flight has been consistently pushed back. In July, Musk admitted that engineering the rocket has been harder than expected.

Now, five years after the launch’s original target date, the Falcon Heavy’s flight seems imminent. Musk tweeted out pictures of the rocket almost fully assembled at Cape Canaveral, Florida, where it’s due to start its maiden voyage. The payload for the mission — Musk’s red Tesla roadster — has been enclosed in the rocket’s nose cone. Now all that’s left is to test fire the rocket and then actually launch it. SpaceX claims all of this will happen in January. Whenever the vehicle does get off the ground, it’s guaranteed to be one of the most watched flights in years.

US spaceflight startup Rocket Lab is still testing out its experimental rocket, the Electron, designed to send small satellites into orbit. There was already one test flight in May, though the rocket didn’t achieve orbit. Rocket Lab intended to do a second test flight in December, but the weather and some technical snags prevented the launch. Now, the company plans to launch again in early 2018, and if the flight goes well, Rocket Lab may stop test flights and go straight to commercial missions. 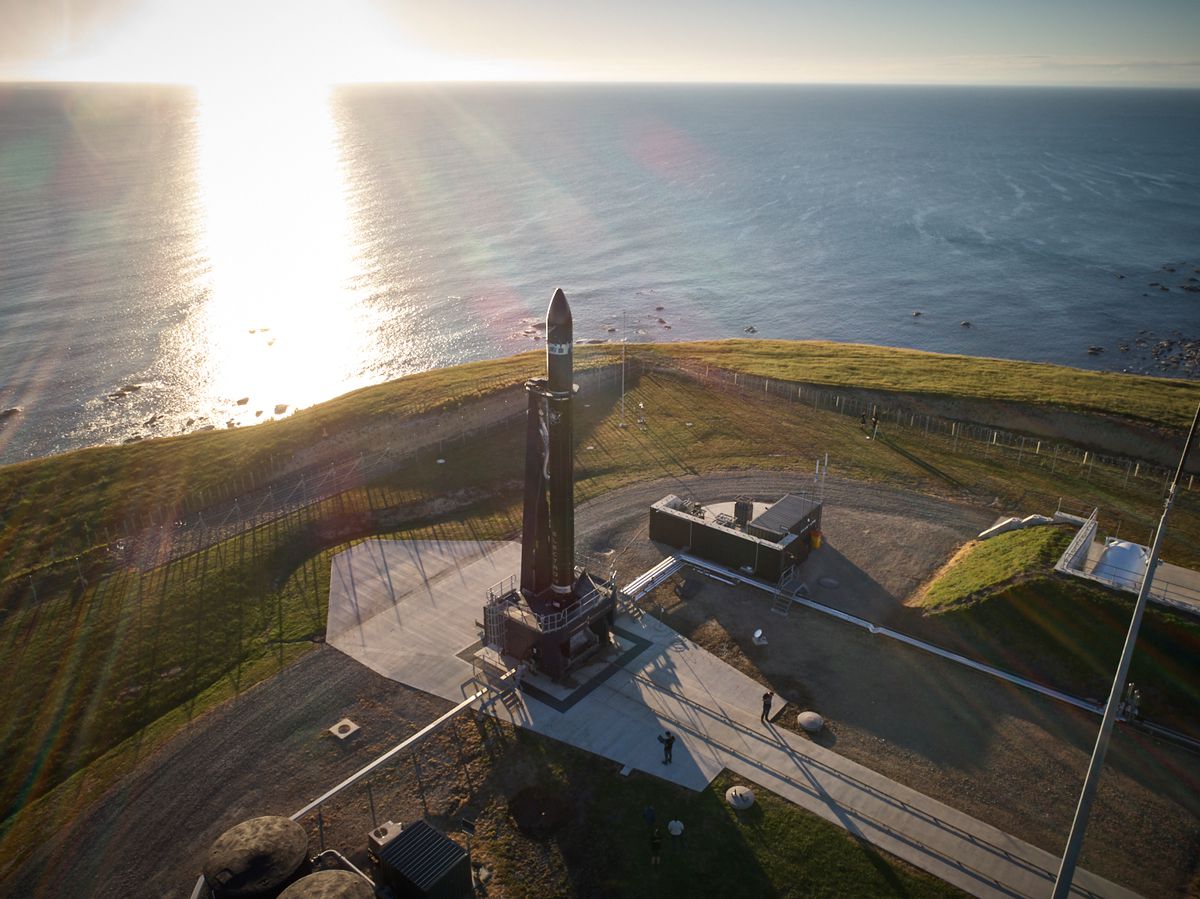 Rocket Lab launches out of its own facility on a remote cliff in New Zealand. And the company plans to livestream this mission, too.

Finally, we’ll find out which of the five remaining teams in the Google Lunar X Prize will complete their mission to the Moon before March 31st, 2018, the competition’s deadline — and the answer may be none. To win, a robotic spacecraft must land and explore the Moon. The first team to reach the lunar surface and complete all of the contest’s requirements before the deadline will receive a grand prize purse of $20 million.

However, it doesn’t seem likely that anyone will even launch before the deadline. Four of the five finalist teams have yet to complete their landers, and two still aren’t fully funded. A fifth team — Hakuto from Japan — has completed its lunar rover, but the vehicle is meant to ride to the Moon on another team’s unfinished lander. It’s unlikely we’ll see any X Prize missions before the deadline at all.

NASA’s next exoplanet-hunting spacecraft, TESS, is going up this year. Like the space agency’s Kepler probe, TESS will look for planets as they pass in front of distant stars and slightly dim the stars’ light. But TESS will study stars throughout the entire night sky, expanding Kepler’s limited range. The plan is for TESS to find the closest rocky exoplanets to Earth, so that astronomers can figure out the types of atmospheres these worlds have and if they can potentially host life. TESS’s launch is currently planned for no earlier than March and no later than June on top of a SpaceX Falcon 9 rocket. 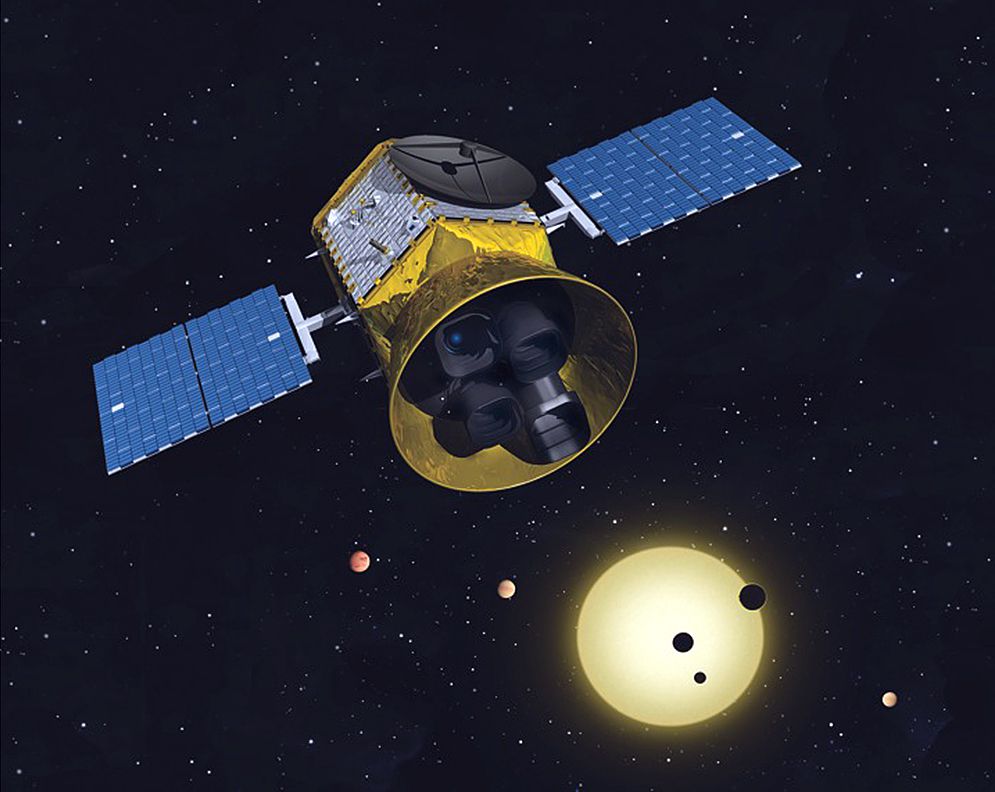 This year could be the first test of two vehicles that are part of NASA’s Commercial Crew Program, the space agency’s initiative to launch astronauts on privately made spacecraft. Both SpaceX and Boeing have been developing capsules to carry passengers to the space station — the Crew Dragon and CST-100 Starliner, respectively. SpaceX is scheduled to do an uncrewed test flight of the Dragon capsule in April, followed by the first crewed flight test in August. Boeing is targeting August for an uncrewed flight of the Starliner and a crewed flight for November. 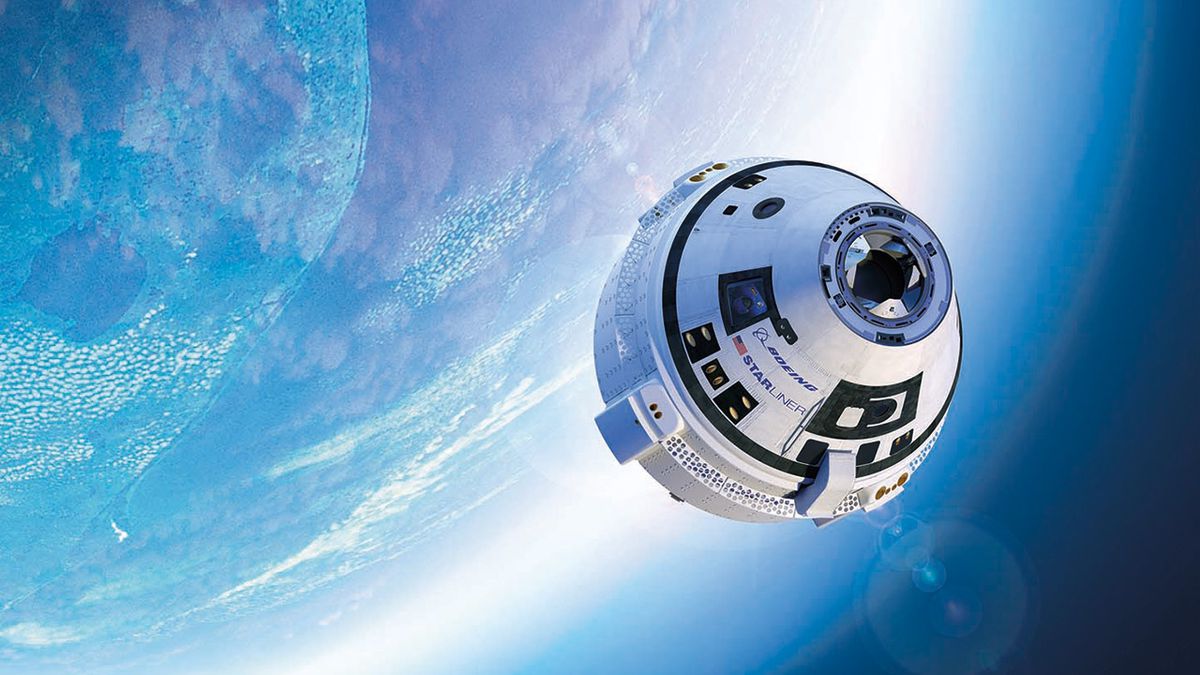 An artistic rendering of Boeing’s Starliner in space. Image: Boeing

These test flights were originally scheduled for 2017, though, and it’s possible that they’ll be delayed again. In fact, the Government Accountability Office thinks that astronauts probably won’t fly on SpaceX or Boeing vehicles until 2019. The target dates stand for now, and Musk says he is confident the company will fly people in 2018.

All year: Testing at Blue Origin and Virgin Galactic

Many other commercial space companies will likely do big test flights of their own in 2018, too. Just before the end of 2017, Blue Origin pulled off another launch and landing of its New Shepard — a rocket designed to take paying customers to space to experience a few minutes of weightlessness. Testing should continue into the new year, and it’s possible test pilots will start flying on board the rocket in 2018. 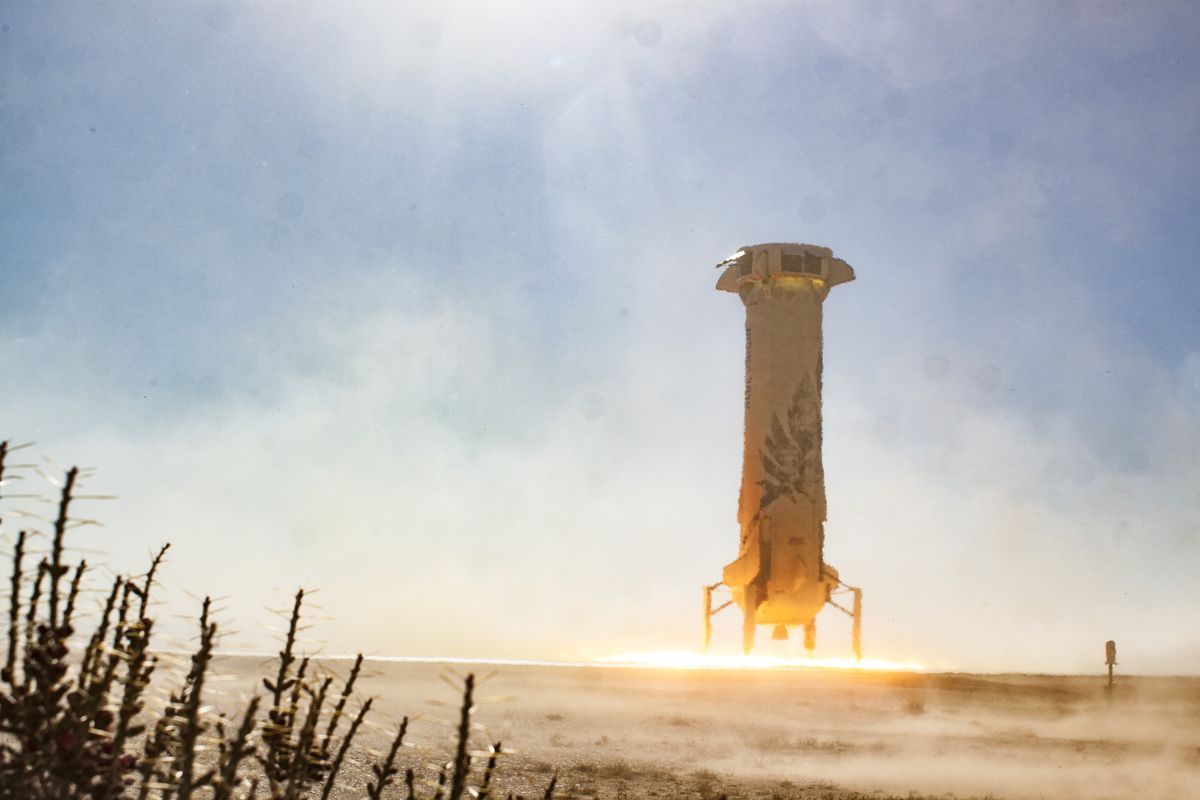 Meanwhile, fellow space tourism company Virgin Galactic should soon begin powered test flights of its spaceplane, VSS Unity, which is also designed to give passengers a short weightless experience in space. The company has been taking it slow with this vehicle, though. Virgin Galactic’s last powered test with Unity’s predecessor, VSS Enterprise, ended in failure: a test pilot was killed and the spacecraft was destroyed. So the company has only done a few unpowered glide flights with Unity since the vehicle’s debut in 2016. But Virgin has been preparing to ignite the spaceplane’s engine, and this may be the year. The VSS Unity on one of its glide flights. Image: Virgin Galactic

Virgin Galactic’s offshoot company, Virgin Orbit, also has big plans for the new year. The company has been developing a rocket launcher, which is designed to drop from the wing of an airplane, and then ignite — putting small satellites into orbit. The first test flight of the rocket could happen in early 2018, according to a vice president for Virgin Orbit.

NASA’s InSight spacecraft is designed to land on the surface of Mars, where it will study the interior of the Red Planet and figure out how the world formed billions of years ago. The lander was originally supposed to launch in 2016, but the mission was delayed after a leak was spotted in one of the spacecraft’s instruments. Now the instrument, meant to analyze quakes on Mars, is fixed and the spacecraft is nearly ready for its trip. InSight’s launch on top of an Atlas V rocket is planned for sometime within a 30-day launch window that opens on May 5th. It should land on Mars around seven months later, on November 26th. 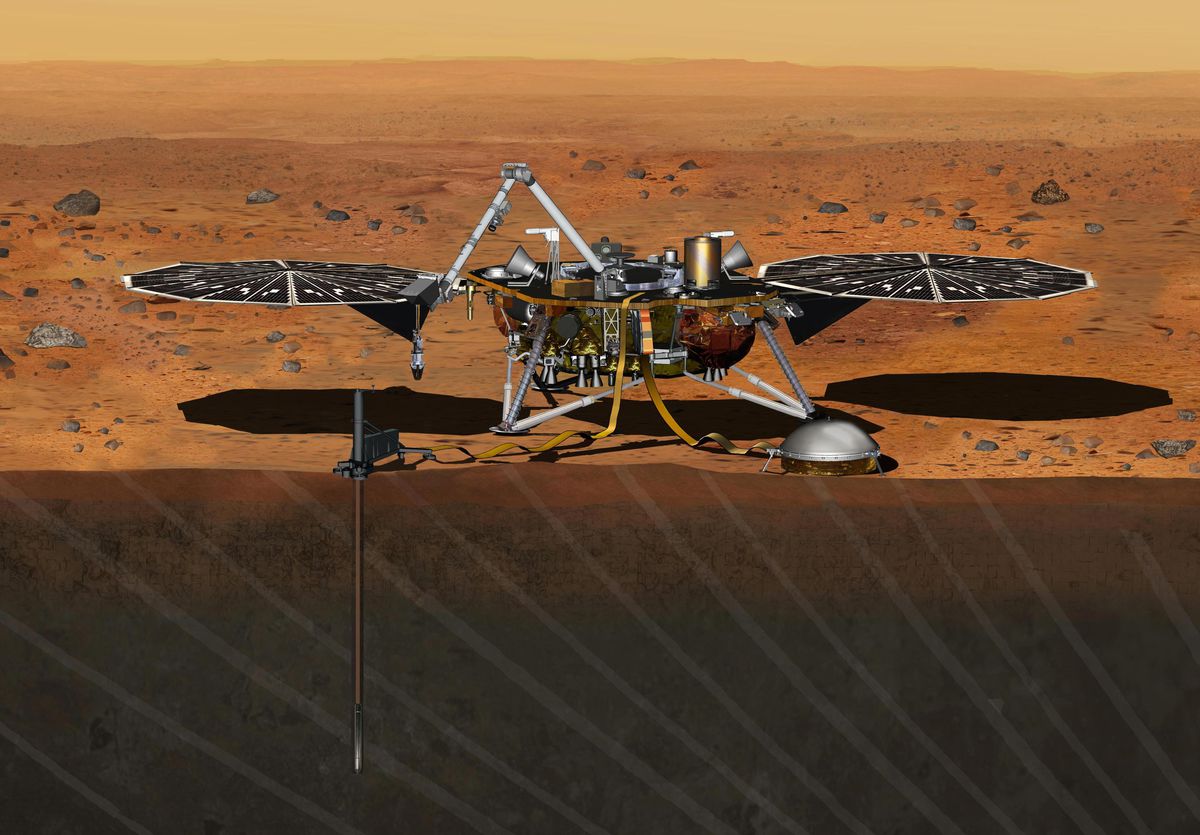 NASA’s Parker Solar Probe is being hailed as the first spacecraft that will “touch” the Sun, though it won’t actually plunge into the Sun’s surface. Instead, it’ll be a mere 3.9 million miles away from the solar surface, flying through the outer edges of the Sun’s atmosphere.

That will allow the spacecraft to study the origins of something called solar wind, streams of highly energetic particles that are ejected from the Sun’s atmosphere at super high speeds. Solar wind often zooms past Earth and can mess with our planet’s magnetic field, causing interference with our satellites and even our electrical grid. The Parker Solar Probe is meant to tell NASA how these particles get so sped up — a question that scientists have had for decades.

The probe is scheduled to launch on top of a Delta IV Heavy rocket sometime between July 31st and August 19th.

In September 2016, NASA launched its OSIRIS-REx spacecraft, sending the probe on a journey to grab a sample from an asteroid named Bennu. The trip to Bennu takes about two years, though — so finally, in August, the spacecraft will “arrive” at the asteroid, coming within 1.2 million miles of the rock. OSIRIS-REx will then use its onboard engines to move closer and fly in formation with the asteroid.

An artistic rendering of OSIRIS-REx arriving at Bennu. Image: NASA

After that, it will be a while before the spacecraft grabs its sample. In October, OSIRIS-REx will begin a year-long survey of Bennu, mapping out the asteroid’s surface to find the best place to scoop up rocks. OSIRIS-REx does have a set of cameras on board so we might get some high-resolution pics of Bennu in the meantime.

October 2018: Launch of BepiColombo to Mercury

A new mission to Mercury, the least explored planet in our Solar System, is on the calendar: BepiColombo, a joint project between Europe and Japan, will send two spacecraft into orbit around the closest planet to the Sun. The spacecraft are set to launch combined on top of a European Ariane 5 rocket in October and will arrive at Mercury in 2025. Once in orbit, the two spacecraft will separate, with Europe taking control of one and Japan taking control of the other. Together, the two vehicles will analyze as much as possible about Mercury — from the planet’s magnetic field to its surface and interior.

After its journey through space, InSight will arrive at Mars and land on its surface on November 26th. But landing on the Red Planet is tough: Mars has a very thin atmosphere, which provides little cushion to slow incoming spacecraft. Many other Mars-bound spacecraft have come in too fast during landing attempts and created new craters on the planet’s surface, like Europe and Russia’s ExoMars lander did in 2016.

InSight will use a combination of parachutes and onboard engines to gently lower itself down to the Martian surface. The entire landing will last just seven minutes, and if it’s successful, the spacecraft will spend the next two years studying Mars and its interior.

NASA’s New Horizons spacecraft has been traveling even farther out into the Solar System after its encounter with Pluto in 2015. Early in the morning on New Year’s Day, the probe will fly by a small rock in the Kuiper Belt — the large cloud of icy bodies that orbit beyond Neptune. This is a first: no human crafts have ever visited one of these objects. New Horizons’ target is a rock dubbed 2014 MU69, though it’s possible that the object is actually two rocks orbiting close together. And the science team thinks the rock (or rocks) may even have a moon. We’ll know for sure when New Horizons flies by around 12:30AM ET on January 1st.

Yes, technically that’s in 2019, but it’s going to be the perfect way to cap off a busy year in space.