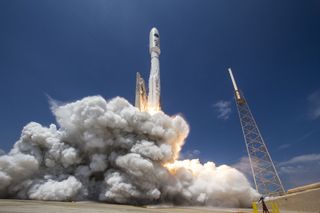 In a move with wide-ranging implications for NASA’s human spaceflight program and U.S. national security, Russian Deputy Prime Minister Dmitry Rogozin yesterday (May 13) announced that his nation would ban the export of RD-180 rocket engines to the United States and pull out of the International Space Station project in 2020.

“Russia is ready to continue deliveries of RD-180 engines to the US only under the guarantee that they won’t be used in the interests of the Pentagon,” he wrote in a tweet.

The RD-180 engine powers the first stage of United Launch Alliance’s (ULA) Atlas 5 rocket, which is used almost exclusively to launch American military satellites and other government payloads. NPO Energomash of Russia builds the engines and sells them to ULA through RD-AMROSS, a joint venture of Energomash and United Technologies Corp.

The politics of space

The moves are in retaliation for sanctions the United States placed on Rogozin and other government officials over Russia’s annexation of Ukraine’s Crimea Peninsula and the actions of Moscow-backed paramilitary groups in eastern Ukraine. Rogozin oversees Russia’s military and space sectors.

A ban on RD-180 exports would likely have the U.S. Air Force scrambling to restructure its plans for launching defense satellites, and it could also disrupt NASA’s Commercial Crew Program, which aims to develop vehicles capable of taking U.S. astronauts to the International Space Station by 2017. American astronauts now ride on Russian Soyuz spacecraft.

Two of the three commercial crew competitors, Boeing and Sierra Nevada Corp., plan to launch their seven-person spacecraft on Atlas V boosters. The third competitor, SpaceX, would launch its Dragon spacecraft aboard its own Falcon 9 rocket, which is domestically produced. [NASA’s Commercial Space Taxi Plan for Astronauts (Video)]

Boeing has designed its CST-100 capsule spacecraft to be compatible with multiple launch vehicles. The company could potentially launch the CST-100 on ULA’s Delta 4 booster or SpaceX’s Falcon 9 rocket. It is not known whether Sierra Nevada has the same options with its Dream Chaser mini-space shuttle.

“We’re really focused right now on the selection of a provider or providers for our ability to take American astronauts from American soil again,” Bolden said. “We’ve got three great bidders. You know, as I understand it, really strong companies. We’ve been working, as you know, with Boeing and Sierra Nevada and SpaceX for a number of years now … My intent is that we’ll be launching Americans from American soil in 2017. [The Rockets and Spaceships of SpaceX (Photos)]

“The way that I understand it from talking with ULA is they have enough engines already in their stockpile to fly out their missions for the next few years,” Bolden added. “It’s like people were concerned about Orbital [Sciences Corp.] because they used what is a Russian rocket engine, it was the old NK-33 but it’s now called the AJ-26, but they own every single one of those assets. So none of this is caught up in it. That’s why I don’t go on rumor and innuendo, you know, I sit down with the team. And the team’s pretty confident we’re going to have some commercial providers to carry humans to orbit.”

United Launch Alliance’s Atlas 5 rocket is powered by the RD-180 engine, which is built by NPO Energomash in the Moscow region and sold to ULA by RD-Amross, a joint venture between the Russian manufacturer and United Technologies Corp. (Image credit: NASA/Charisse Nahser)

Bolden also stressed that the American plan to extend use of the International Space Station from 2020 to at least 2024 was a proposal to the international partners, which include Russia, Europe, Japan and Canada.

“It is not a unilateral decision on the part of the United States,” he said. “Our recommendation to the partners, and all of the partners have agreed that they’re going to look at extending the life of the station to 2024 … And I would remind everyone, the first two people to sign the proposal to do so were Mr. [Oleg] Ostapenko and me. Mr. Ostapenko [the head of] Roscosmos, the Russian space agency. You’re talking about diplomatic action, and I’m talking about just operational interaction between Roscosmos and NASA. So, until we get word from somebody else, then nothing’s changed for us right now.”

NASA also released a formal statement that focused on cooperation with Russia:

“Space cooperation has been a hallmark of US-Russia relations, including during the height of the Cold War, and most notably, in the past 13 consecutive years of continuous human presence on board the International Space Station. Ongoing operations on the ISS continue on a normal basis with a planned return of crew [Tuesday night] and expected launch of a new crew in the next few weeks. We have not received any official notification from the Government of Russia on any changes in our space cooperation at this point.”

The impact on the U.S. Air Force would be even more significant than on NASA. In December, the service signed a no-bid deal to purchase 36 Atlas 5 and Delta 4 rocket cores from ULA over the next five years. Seven or eight additional launches would be open to new competitors such as SpaceX.

The judge lifted the injunction after the government provided those assurances. However, Rogozin’s announcement yesterday rendered the decision moot.

ULA issued a statement yesterday saying it was unaware of any restrictions on the export of the engines.

“We are hopeful that our two nations will engage in productive conversations over the coming months that will resolve the matter quickly,” the company wrote in the statement. “ULA and our Department of Defense customers have always prepared contingency plans in the event of a supply disruption. ULA has two launch vehicles that can support all of customers’ needs. We also maintain a two-year inventory of engines to enable a smooth transition to our other rocket, Delta, which has all U.S.-produced rocket engines.”

ULA also blamed SpaceX for pushing the issue over the brink.

ULA’s options for replacing the RD-180 engine are neither cheap nor fast. United Technologies has the right to produce RD-180 engines in the United States under license. However, officials have said such an effort could cost $1 billion and take five years, thus idling the Atlas V rocket for several years.