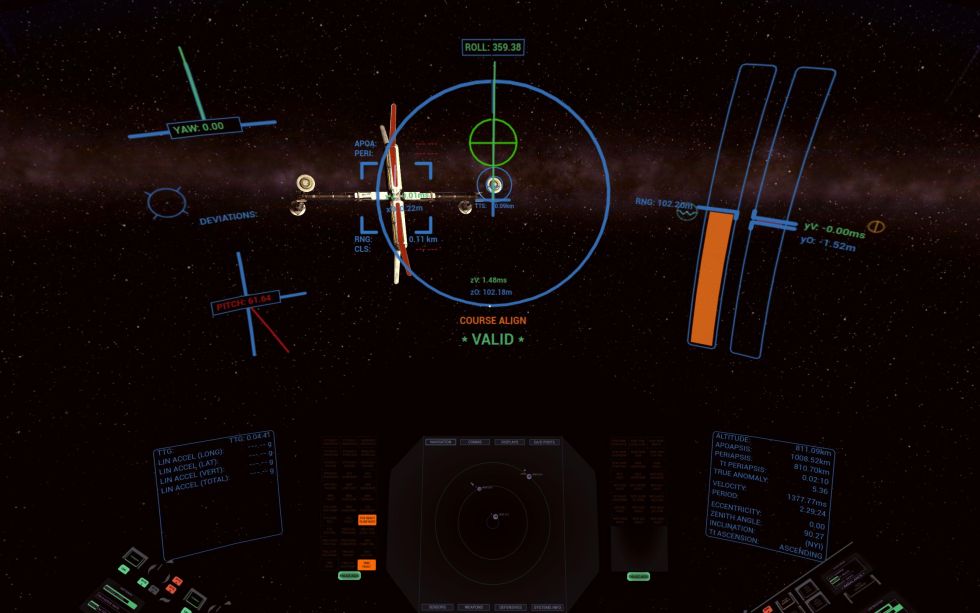 Last year I was lucky enough to get to sit down in an actual Navy F/A-18F Hornet simulator and log about a full hour of flight time. I was saved from most of the raw complexity of flying the twin-engine supersonic fighter because Commander Matt “Sparky” Smith spent the whole flight crouched outside of the cockpit, handling most of the navigation and communication and management tasks, leaving me free to stick-n-throttle the aircraft just like a video game. Without all that stuff, flying was pretty easy.

I’m definitely missing Sparky on my wing when I load up Rogue System. My assisted flight time in the Hornet stacks up against the game’s fictional FireArc space strike fighter like kindergarten stacks up against college algebra. There are fuel cells to prime, a small nuclear reactor to watch, and space traffic control to talk to—and that’s all even before you undock. The game isn’t anywhere even close to complete yet, and there’s not a tremendous lot to do besides docking and undocking and practicing your rendezvous skills, but everything you can do today in Rogue System is wrapped in layer upon layer of complexity—much like flying an actual aircraft, without the trained Navy combat pilot to handle the hard stuff for you.

That’s not to say that the game isn’t fun—perversely enough, it is fun. For one thing, there’s something intrinsically satisfying about flipping the FireArc’s switches and watching the craft respond to your commands—when you navigate the 80-plus line checklist to take the craft from cold shutdown to ready to undock, you feel like you’ve actually accomplished something. It’s not just the memorization and application of a complex series of steps—that’s part of it, of course, but the game also manages to deliver a feeling of presence that you don’t get even when strapped into an Oculus Rift playing Elite Dangerous. It feels like you’re an integral part of the ship—you’re not just flying it, but controlling it.

And I found that extremely intriguing.

Once more into that damned breach

Rogue System is being developed solo by Michael Juliano, a former Air Force B-1 bomber technician—and, crazily enough, also a resident of the same small Houston suburb that I live in. Juliano was kind enough to agree to meet up for lunch on a weekday afternoon and give me some details on Rogue System’s development—and as it turns out, the game has had a pretty rocky road even getting to the playable alpha stage it’s at today.

Juliano spent the ’90s playing pretty much the same games I was playing at the time. “But what always bugged me,” he explained around one of Nobi’s awesome bahn mi sandwiches, “was that they never went as deep as flight sims… I kind of always hoped someone would, and they never did, and I got tired of waiting.”

Flight sims, of course, usually err on the side of realism and complexity; today, they can incorporate procedures identical to the real-life aircraft they simulate. The Navy’s F/A-18 sim would have been even more complicated if I’d had to actually run the simulated aircraft through all of its checklists and manage all of its flight systems—which I didn’t—and it was that level of complexity that Juliano was chasing. He wants Rogue System to do for space sims what titles like DCS World have done for aircraft sims.

Juliano is a self-taught digital artist and coder, working with publisher ISI on art for the rFactor series, and by 2010 he felt comfortable enough with coding that he wanted to jump fully into game design. After spending a couple of years constructing a prototype, he was in the process of prepping a crowdfunding campaign for the game when he found himself pitching his product against the same AAA designers whose games he’d played a couple of decades before.

“Just as I was getting ready to go to Kickstarter, I heard that Roberts was coming back and Braben was coming back, and they were doing the Kickstarter thing,” he explained. “I really pushed to try and beat those guys out because I knew that once I got there I’d be clobbered—and sure enough, they beat me by a month, and by the time I got there, there was absolutely nothing left. Focus was completely on those two, wallets were completely on those two, and I got buried.”

After the Kickstarter, Juliano took some time away from Rogue System and went back to working on art for ISI. Still, the game stayed on his mind, and he eventually negotiated a “minimum funding” publishing deal for it with ISI. “They saw that even though the Kickstarter didn’t fly, it did draw some fairly good attention, and they were impressed by that,” Juliano said. With ISI as the publisher, Juliano switched to working full time on Rogue System development.

This time around, rather than front-loading the development with crowdfunded dollars, Juliano is simply charging for early access. An outlay of $10 gives anyone access to the game’s prerelease alpha, and players can lay down a bit more cash and purchase the game outright if they wish. Coupled with the funding from ISI, the idea is to fund development of the game this way through to release.

The game is different considerably from the 2013 Kickstarter prototype—but at the same time, it isn’t. He swapped the game’s engine from Nuclear Fusion to Leadwerks (which he picked over Unity because of Leadwerks’ C++ scripting), and reordered development priorities a bit to focus on the “hard” aspects of the game’s spacecraft. “It’s not that the Kickstarter stuff is invalid,” he said, referring to the Kickstarter videos showing a wildly different cockpit than appears in the game today. “I still intend on doing the interactive HUD kind of thing… When I did the engine change, I realized it was time to set that aside and work on the more hard controls you’d need for backup.”

The cockpit’s current layout is informed mostly by Juliano’s time in the Air Force working with checklists and switches, but he’s quick to point out that it’s not set in stone. The FireArc’s current interior was built in less than a week, and the cockpit and control panel layout was built in two more, including texturing and shading. The large left and right physical consoles that flank the player’s seat had controls added to them as needed without a full workflow analysis or anything like that—and, indeed, running through the procedures in the game’s tutorial missions involves a lot of back-and-forth between the left and right panels.

Still, things feel solidly grounded in real life air- and spacecraft ergonomics. The bank of caution and warning lights that flank the central display contain items on them that echo NASA’s well-established argot (judging by the warning labels it’s possible to have some very Apollo 12- or Apollo 13-style system failures). Interacting with the FireArc’s central display even requires calling up a small on-screen mouse cursor—again, much like interacting with a VDU on a modern jet fighter.