Rebel Galaxy Outlaw: Well, lookie here! For once a space game that doesn’t promise the universe

And it’s probably better for it

The RPG Greetings, traveller, and welcome back to The Register Plays Games, our monthly gaming column. Since the last one, not only did we play and complete Bioshock for the first time, but also Batman: Arkham Knight. And a lot of Kenshi.

Did we mention it’s an incredible game? Of course we did. However, this month we’re being very professional and timely – taking to the stars with Rebel Galaxy Outlaw, which was out 13 August. Oh, and the summer heat wreaking havoc on my CPU? The heatsink was broken. We’re water-cooled now, baby!

A good four or five years ago, sitting in my poky studio flat figuring out how I should waste my time next, a thought occurred to me. Where did all the space games go? Where was a modern follow-up to, say, X-Wing vs Tie-Fighter? I fondly remembered my kidhood pals pulling out tacky beige joysticks with chunky red buttons and having a blast pretending we were ace pilots.

In 2003, we had EVE Online (still going strong) but since that was widely hailed as Spreadsheets: The Game, space-based titles seemed to be thoroughly uncool by the mid-2010s. However, a quick shufti on the interwebs showed I wasn’t alone. There were at least two ambitious projects making waves – one of which was even (gasp) “finished”. 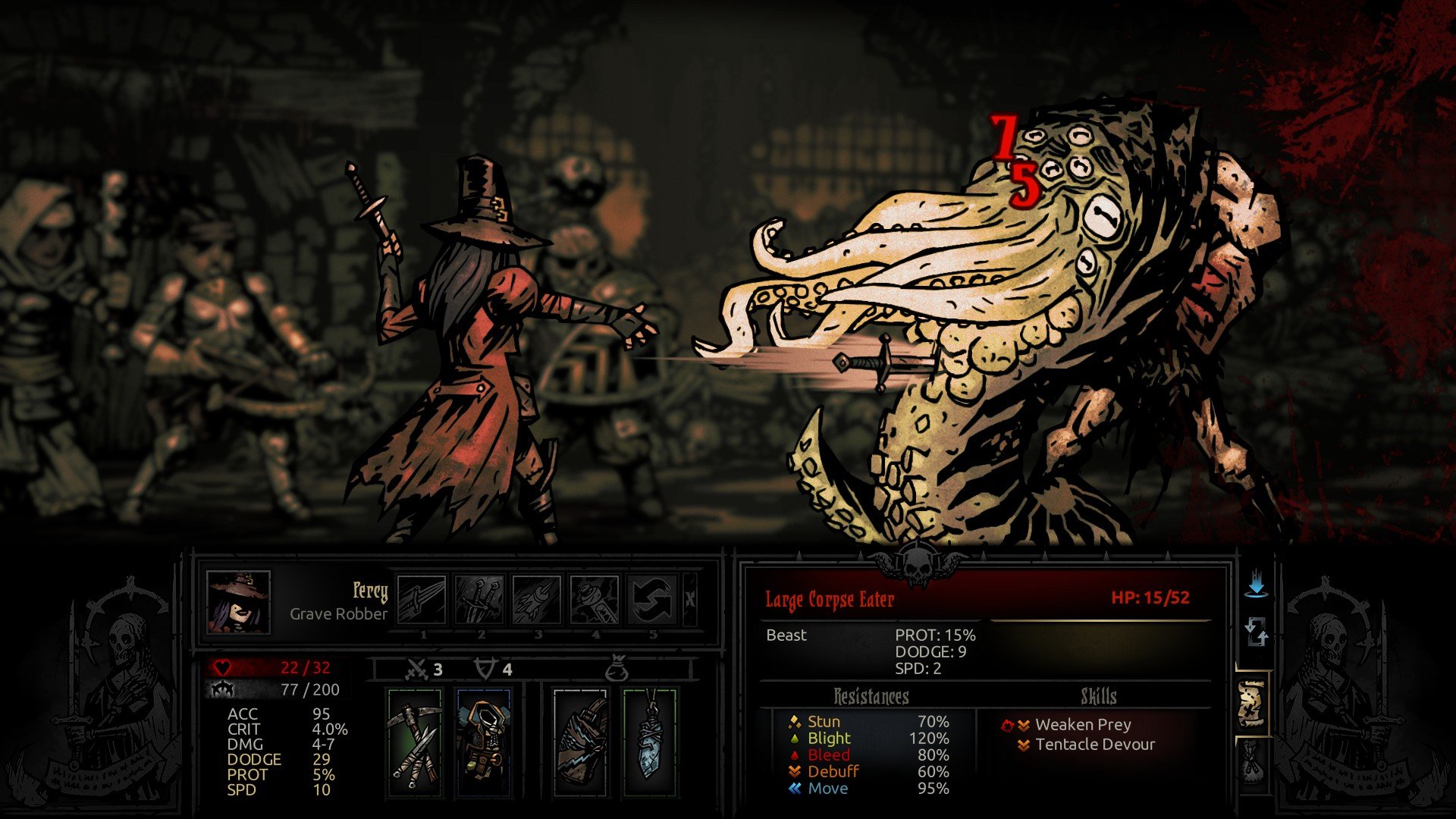 Darkest Dungeon: Lovecraftian PTSD simulator will cause your own mask to slip

The first, of course, was Star Citizen, made by Wing Commander daddy Chris Roberts. It was slated for release in 2014, but by then only two “modules” existed – a hangar and a ship combat arena. Despite loads of footage showing sandworms, sprawling cities and seamless landing on and exploring of planets, the thing still hasn’t delivered what was promised. As it stands, five years later Star Citizen remains a clutch of separate but related demos.

This is the game that was funded by a $200m Kickstarter campaign and apparently money is still needed. To own every ship currently in it, you need only cough up 27,000 real-life bucks! The latest limited-edition spacecraft is just $675!

The other was Elite: Dangerous (ED), from Raspberry Pi Foundation co-founder David Braben’s Frontier Developments, the latest in a series that stretched all the way back to 1984, though until then I hadn’t even heard of the original (which you can now play in a browser). To say it didn’t also overreach would be wrong, but at least I didn’t need to sell the house to play and enjoy it.

And enjoy it I did. I have 260 hours in the space-flight simulation, which takes place in a 1:1 scale model of the Milky Way. Want to see the black hole at Sagittarius A*, the centre of our galaxy? You can. But you’ll need patience, it’s a very long way to go. My ship’s computer lifelessly intoning “frameshift drive charging” with every jump eventually drove me to mute it, though I suppose it was a clever way of hiding loading screens.

You see, space is really big. And convincingly distilling that into a modern game must be rather difficult. ED is enormous but empty – “a mile wide and an inch deep” was a phrase I heard a lot, and when you spend 99 per cent of your time in colonised space, why simulate the rest of the galaxy? (Though player-organised expeditions are a fun thing to follow.) It has MMO elements, but each star system is an enclosed instance with a maximum 25 players, and I only saw anything near that many when the devs held events designed to push commanders into the same regions.

Otherwise, it was usually another lone trader coming up on my display as we both passed through the same system on the way to cash in our cargo. That was the other problem – ED was a massive grind. Everything was determined by how quickly you could make credits, and ship costs were astronomical (no pun intended).

In those 260 hours, I eventually had enough to buy what was, for a time, the most powerful ship in the game, the Anaconda, and only after flogging the rest of my fleet. After that, I grew tired of constantly finding things to do that weren’t related to amassing currency and quickly fell behind. 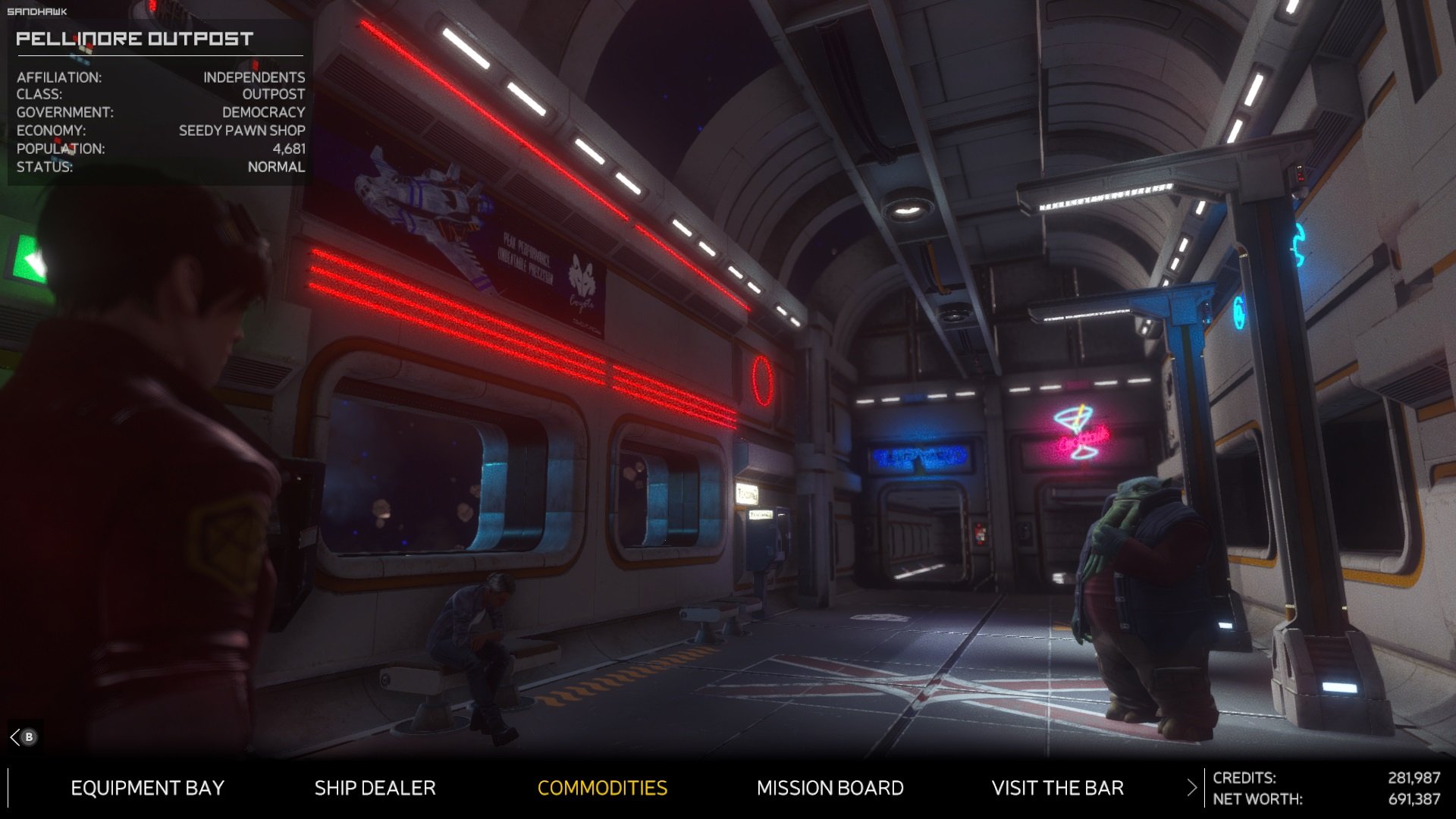 Inside a space station with plump alien (click to enlarge)

Fortunately, there has been a bit of a space game resurgence. No Man’s Sky pissed everyone off by, again, failing to deliver, but nowadays is looking more and more complete. The roguelike Everspace also looks worth a punt. However, this month I was taken by surprise with the launch of Rebel Galaxy Outlaw (RGO) by indie studio Double Damage, which was founded by Diablo and Torchlight talent.

Indeed, for PC at least, RGO is on the Epic Store only for the next 12 months and you can wail and gnash your teeth about that as much as you like in the comments. But I’m of the view that if I want to play a game, I’m going to play it – stores, principles, and monopolies be damned. 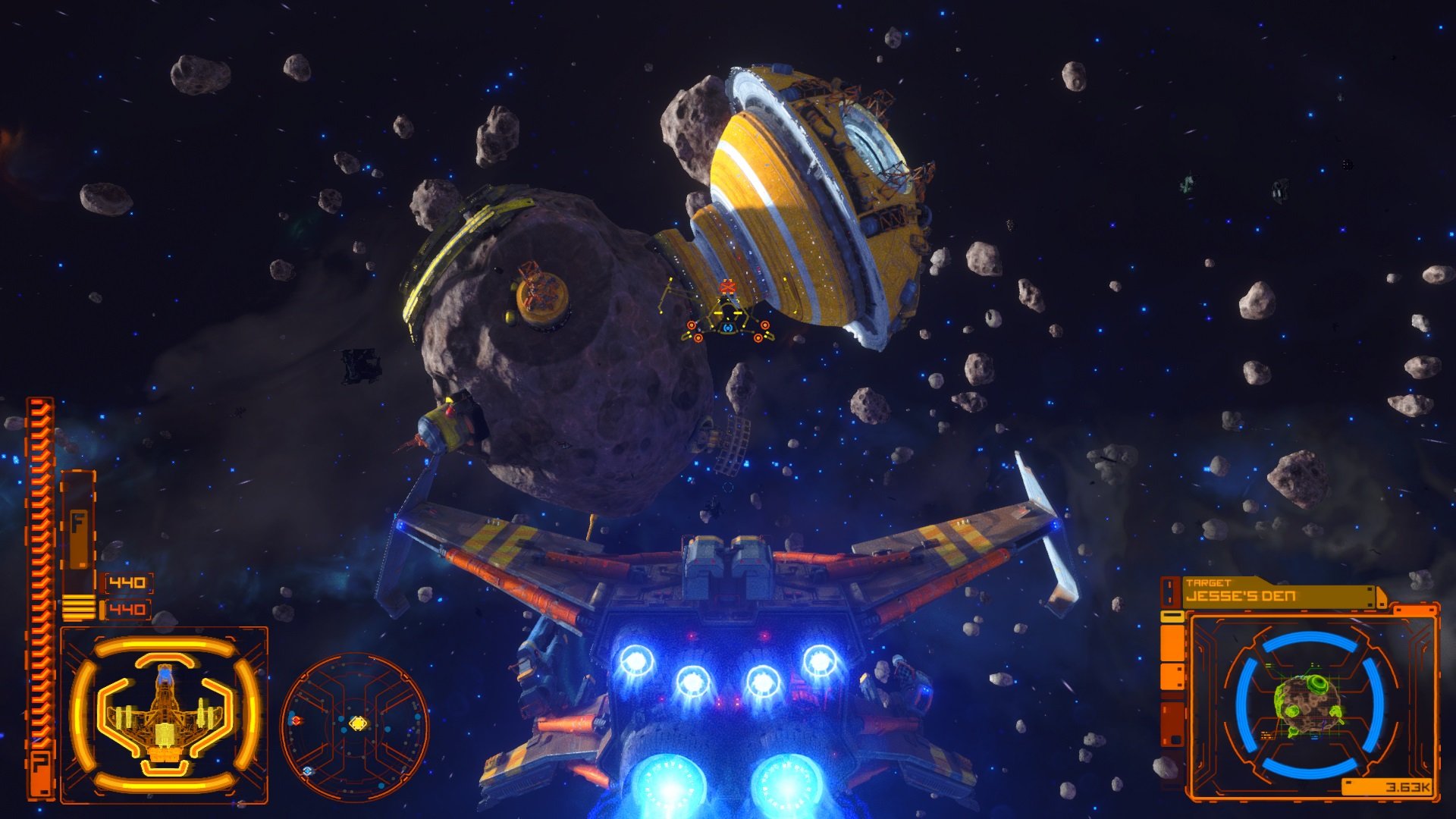 This prequel to the capital ship combat game Rebel Galaxy turns the focus to life in the cockpit of smaller craft, though third-person view is an option, and its developers hold it as a homage to Roberts’ Wing Commander: Privateer. If that tickles your nostalgia appendage then buckle up.

RGO dispenses with the lofty ambitions of ED, Star Citizen and No Man’s Sky to hone in on a smallish sector of space, 40 systems or so all lovingly doused in the Jack Daniels of Deep South Americana. Fans of Firefly will feel right at home since the sci-fi depicted aims for Space Western, whether that’s through the clunky ship designs, the drawls and trucker-esque attire of the NPCs, the interstellar gateways and low-rez displays, or the fact each system is named after southern states and locations. 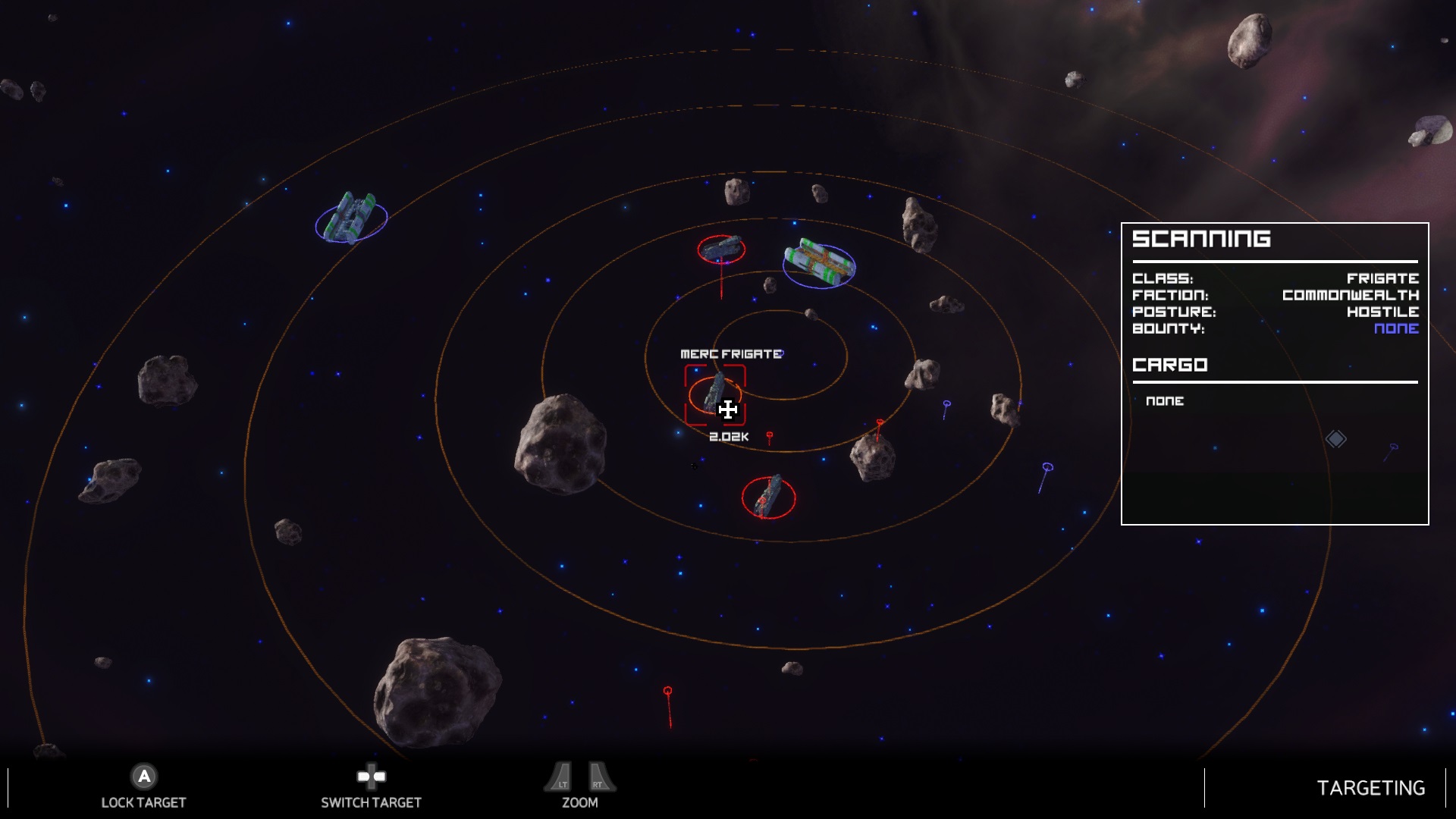 The 20-plus hours of music help hammer this home, and it is a fantastic and obvious addition à la Grand Theft Auto – one ED sorely lacked to the point that players actually started their own browser-based radio station complete with lore-friendly ads, which was great until the spectre of licensing came knocking. With the radio off, there’s a glorious banjo and guitar-led soundtrack reminiscent of those sweltering cricket-infested evenings you see in the movies. With it on, the player is treated to various genres from country to hard rock to outsider jazz and even classical. 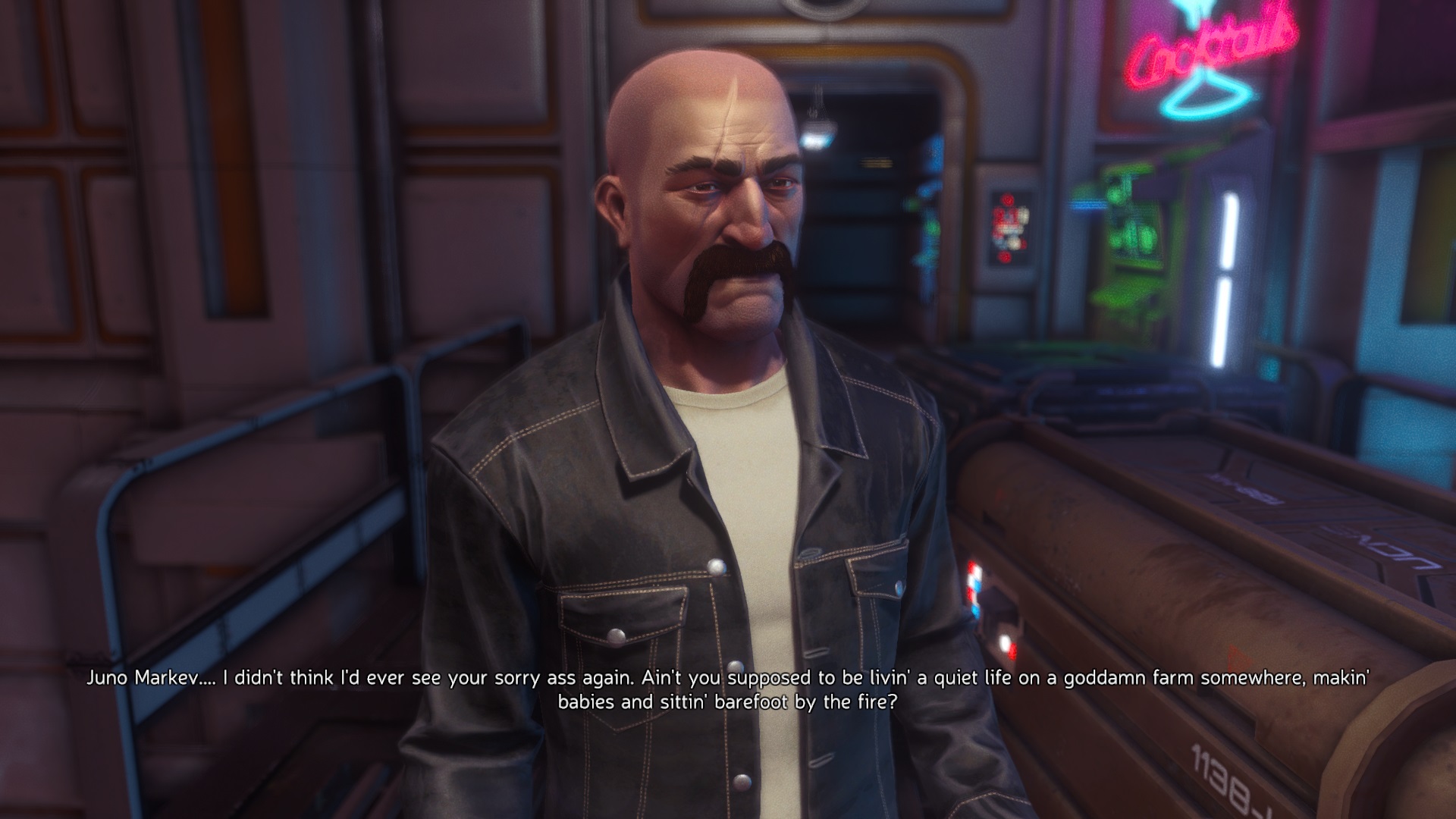 And yes! There are actual fully voiced NPCs to talk to and interact with around the various space stations you’ll stop at. Now, hold your horses, it’s not the fully fledged get-out-of-your-ship-and-walk-around that fans have always longed for, but rather a menu with beautiful and detailed 3D animations in the background. While you may be waiting for that to be properly implemented in Star Citizen by 2040, it’s a damn sight better than what ED settled for, which was land your ship, here’s a 2D menu, collect your missions with some lazy template flavour text, and GTFO my station. In RGO, while landed you can trouble merchant and mercenary guilds for work, hit up the bar for bounty tips, and even have a flutter on the slot machines or shoot some 8-ball with a local in fleshed-out minigames. 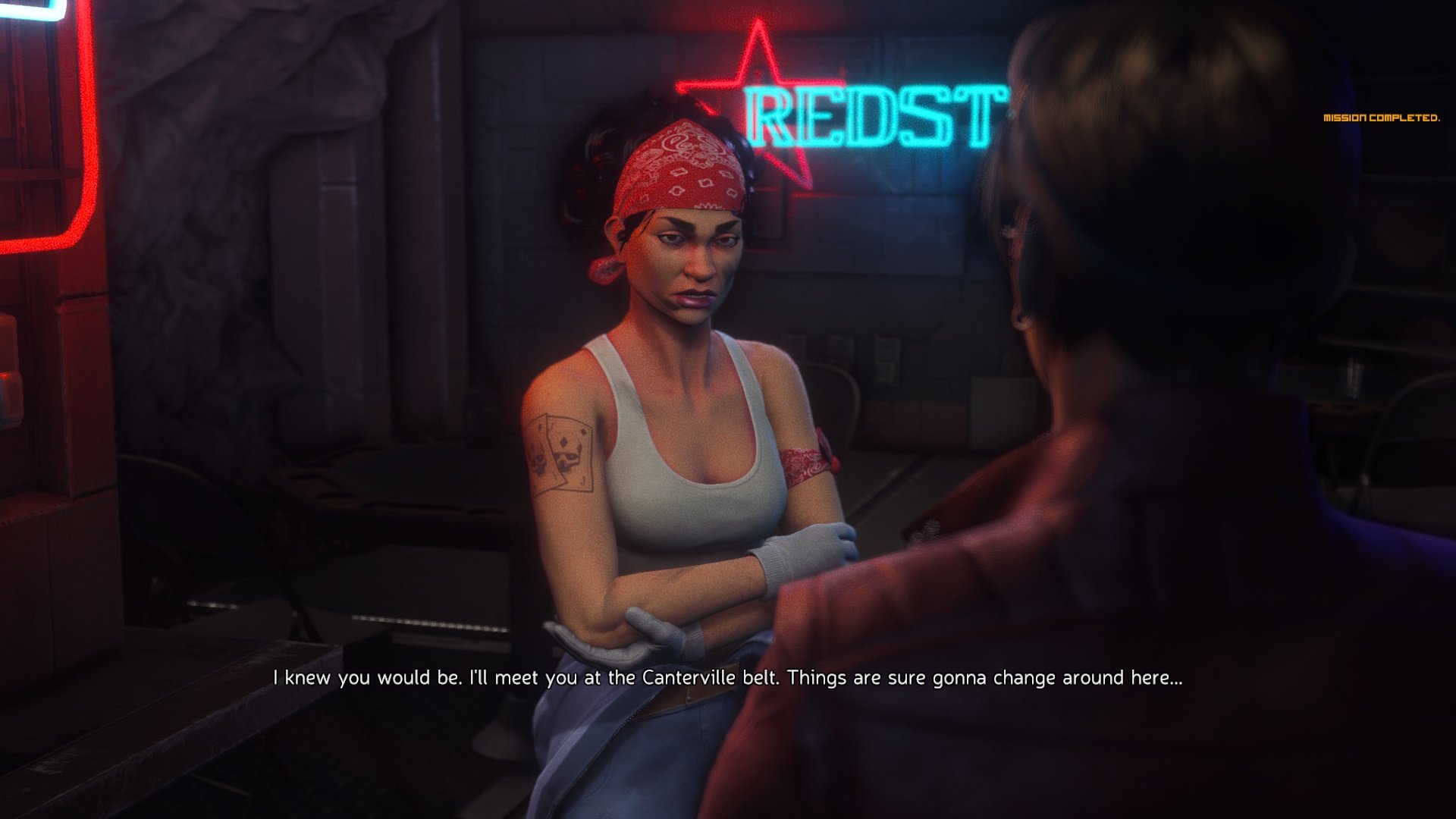 About to engage in a spot of piracy (click to enlarge)

Making RGO defiantly single-player has also allowed for storytelling. You can head off into the void to do as you please as a trader, bounty hunter, merc, pirate or, heck, why not all? And you’ll need to because making money is the only way to outfit your ship and buy better ones. It is very easy to bite off more than you can chew and you’ll die a lot if you keep flying the noob ship for longer than necessary or refuse to upgrade your loadout (as I did). Mercifully, the side quests are fun, varied and swift enough to sidestep any notion of grind, which is helped by the ships’ reasonable prices, and with a modicum of effort you should soon have the best in the game. 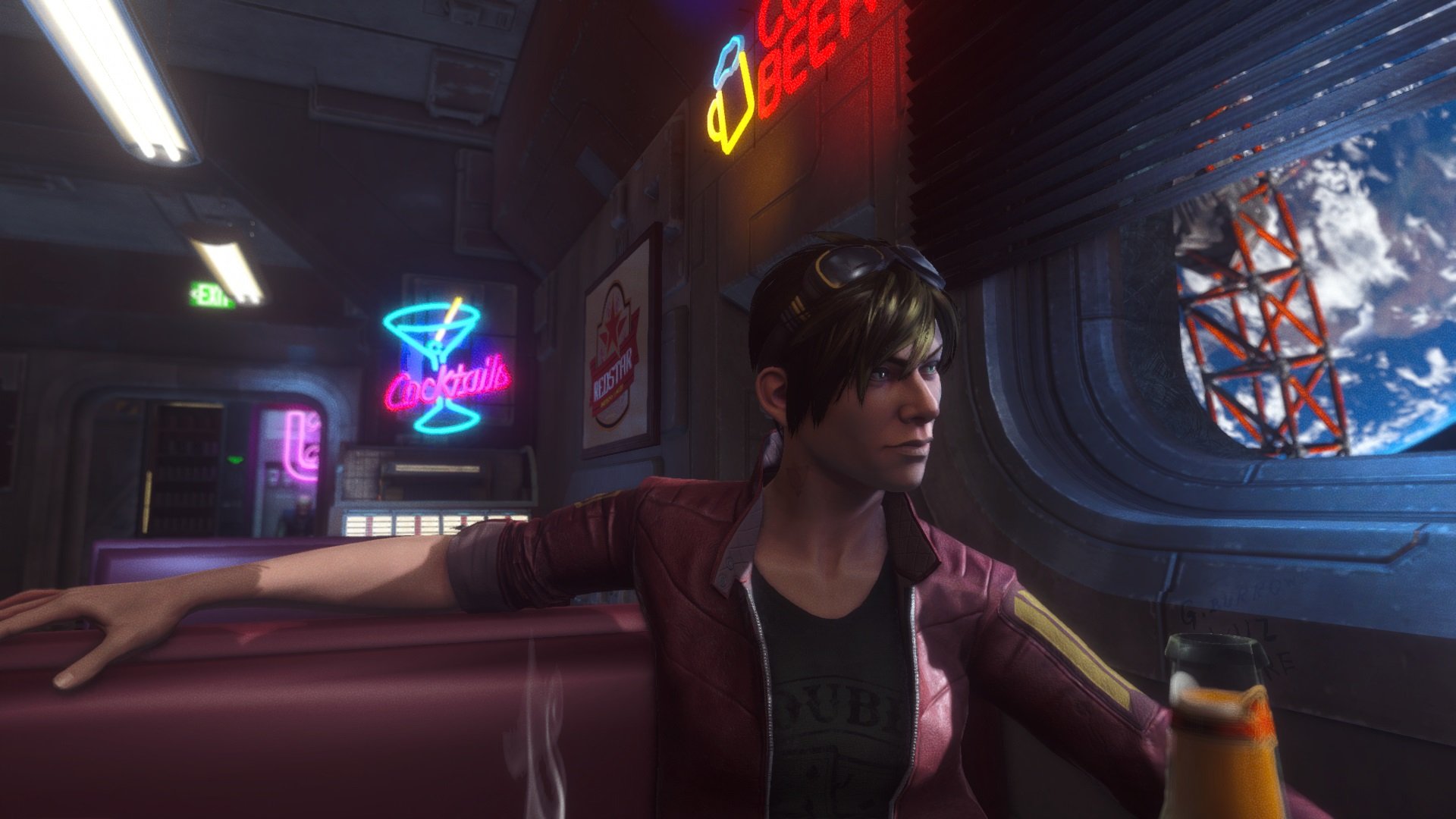 But in the background is an actual main mission that you can pick up and drop at a whim – a quest for revenge by female Han Solo-type Juno Markev. Nope, no hours of customisation before jumping in here, you’re stuck playing as your mum’s hard-drinkin’, heavy-smokin’ best mate. Her voice acting and writing is a little hokey, but hey, at least she’s cool. On the other hand, if you’re proficient in PhotoShop, the in-game ship painting and decal editor is probably a tad too powerful. 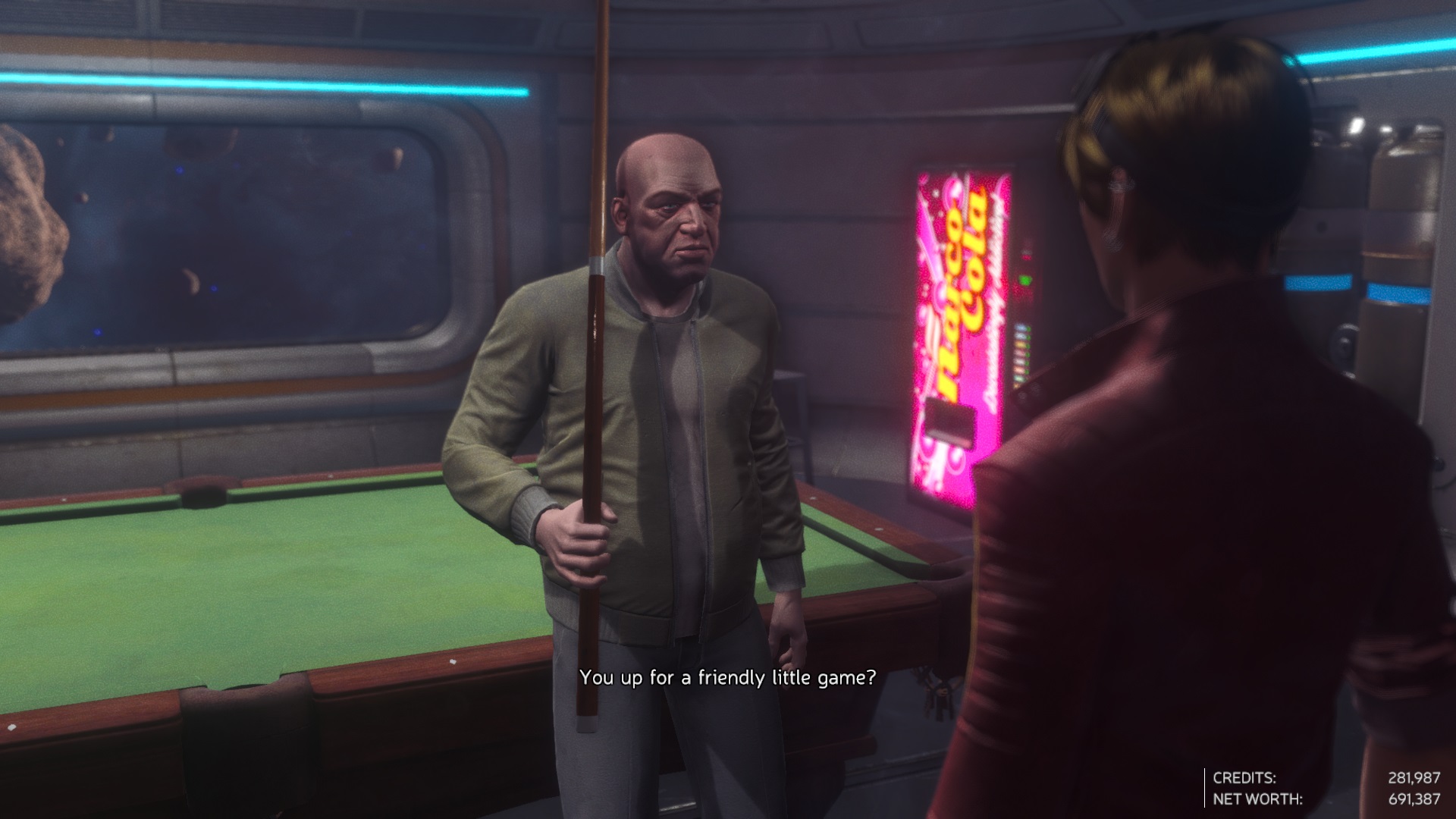 The stakes are always high, and winning is tricky (click to enlarge).

And yet I can’t help but feel something’s missing. Bar some unique planets and stations, each system is the same sort of thing and with the jump gates at either end looking identical, it can be confusing as to whether you’ve even arrived at your intended region without consulting the map. Combat promotes use of a lock-on that tracks and matches the movement of your targeted ship to get it in your crosshairs while you do the finer aiming. Though this does help make you feel like a shit-hot pilot, which is what we all want, one wonders if it’s not ez mode. 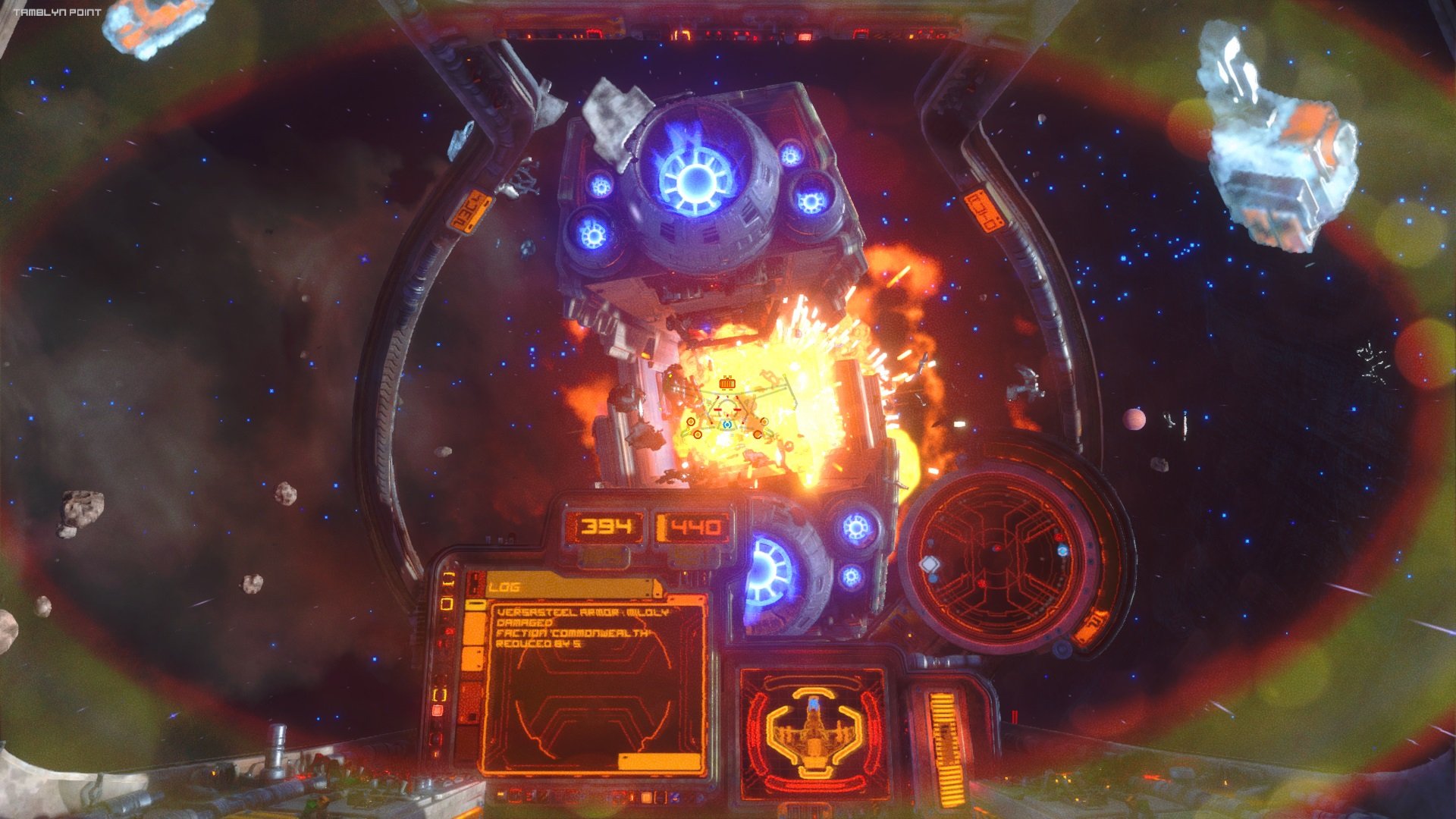 I could be a little too close (click to enlarge)

The omission of vertical and lateral thrusters also threw me off for a while. That might have made for more interesting and challenging dogfights, but it could be down to the fact that the devs recommend a gamepad as their preferred way to play the game, and I obliged, although others have said playing with HOTAS (Hands On Throttle-And-Stick) or m+kb (mouse/keyboard) is perfectly viable. RGO should be viewed not as a space sim, but an arcadey console game. A “targeting mode” also pauses real time and enables you to select an enemy to lock onto while they aren’t in your sights. This and the lack of manoeuvrability means you’d probably already be dead in any other game of the type. 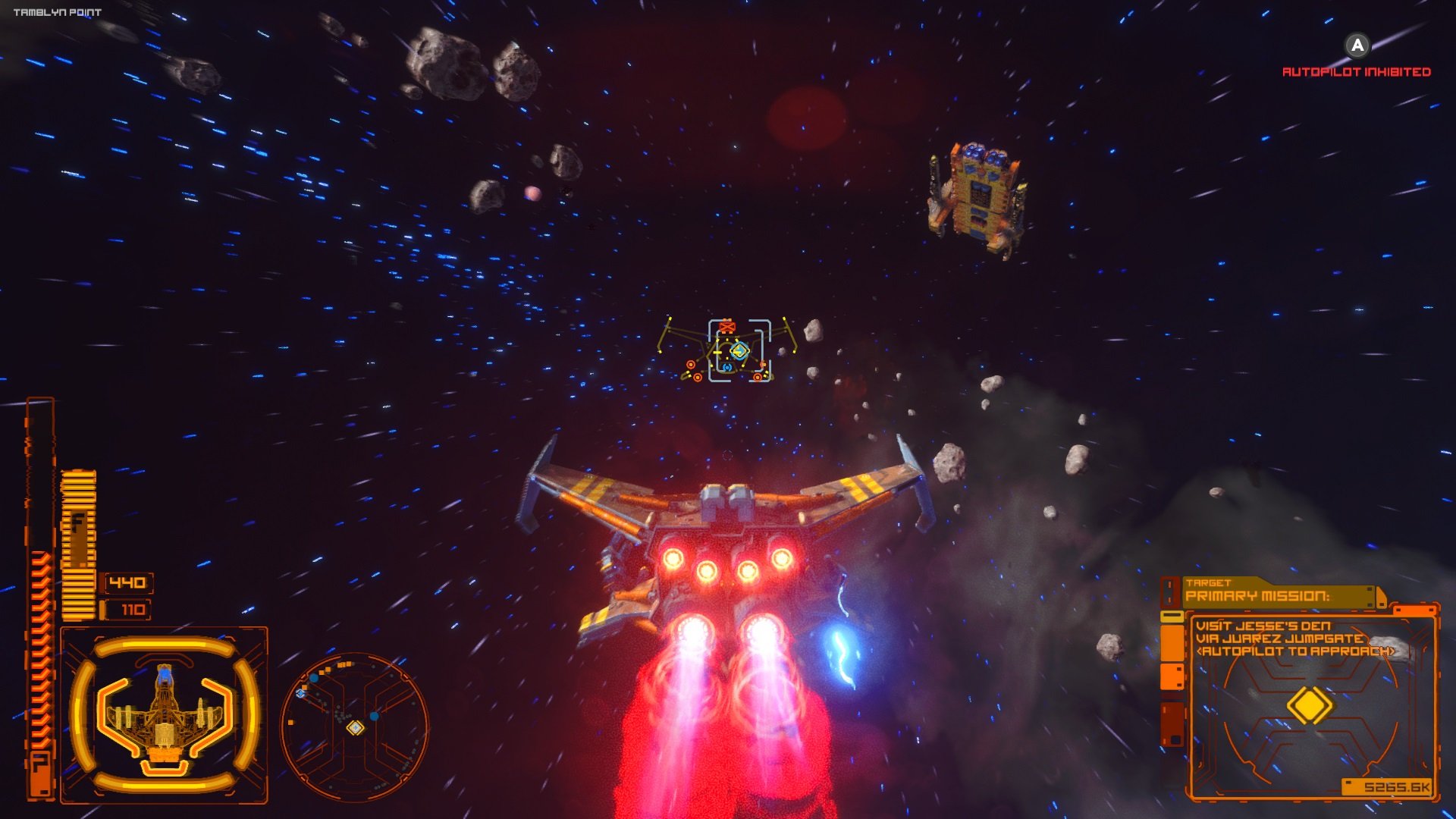 Then there’s the “fast travel” that RGO really wants you to use with a contextualised button press, meaning you can skip tedious jaunts across the system as well as docking procedures, but not before being treated to a brief but neat cutscene… which you can also skip. Ridiculously long trips at many times the speed of light and crashing your new ship in the docking bay after not realising how large it is are surely part of the charm. There is an option to FTL (faster-than-light travel) all the way to an in-system destination, but RGO seems to insist on getting you straight to the action. You’ll also be pulled out if the game deems there to be anything worth investigating on the way. Many will like this feature, just as many will not. Mainly it emphasises just how empty and skippable deep space is, and the contextual nature of fast travel often threatened to sling me into the beyond when I actually wanted to scoop up some whisky. 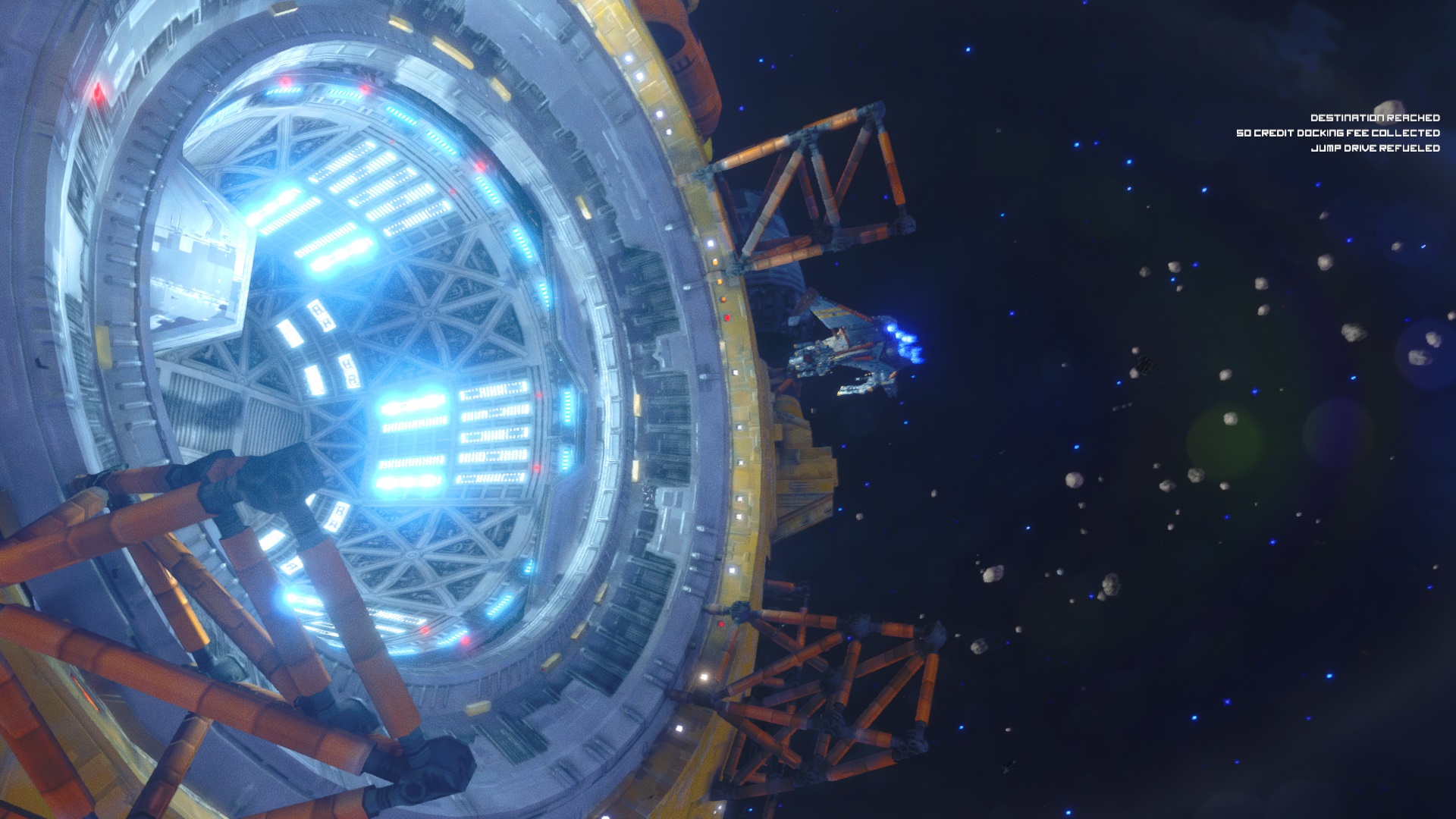 Docking and FTL travel results in a cinematic clip, rather than hands-on faffing (click to enlarge)

Annoyances aside, it’s good old retro fun and long-time fans of the genre will find it well worth the modest price tag. Hopefully RGO can be seen as a starting block for others to step up and drag the space game kicking and screaming into the 21st century – without promising players the universe. So if you find yourself needing to fill that Privateer-shaped hole, you could do much worse. Actually, there’s not really anything else out there right now. ®