In October, NASA Administrator Jim Bridenstine announced he was hiring Doug Loverro as his new associate administrator for human exploration and operations. For the space industry, it was a familiar name in an unfamiliar role. Loverro had spent his career up until now in national security space at the Air Force, National Reconnaissance Office and, most recently, at the Pentagon as deputy assistant secretary of defense for space policy. 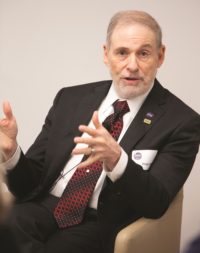 Doug Loverro, NASA’s new human spaceflight chief, wears a special lapel pin to count down the days left to meet a 2024 goal for landing humans on the moon. Credit: Lisa Nipp for SpaceNews

Loverro brings that extensive experience into a new setting. As the successor to Bill Gerstenmaier, who led NASA’s human spaceflight programs for years before being reassigned in July, Loverro is responsible for the Artemis program to return humans to the moon, as well as the commercial crew program and the International Space Station: all high-profile programs with their own sets of challenges.

In this excerpt from a “fireside chat” at the third annual SpaceNews Awards for Excellence & Innovation Dec. 10, Loverro discusses why he took on this new challenge and Bridenstine explains why he believes Loverro is the right person for the job.

After a long career in national security space, why did you decide to come to NASA and take on the challenge of human spaceflight?

Loverro: The short answer is because this man [Bridenstine] asked me to. The longer answer is, how can you resist a job like this? How can anybody who cares anything about space not go ahead and jump at the opportunity to put women and men back on the moon?

I mean, it’s the dream of a lifetime, because my dream started back in the ’60s when I watched the first human missions. I was in Spain with 600 of my high school friends on a foreign study tour. At 9 o’clock at night, some of us were huddled around a 19-inch black-and-white TV watching Neil Armstrong and Buzz Aldrin land on the moon and, a couple of hours later, climb down the ladder.

I have been on that quest my entire existence. I joined the Air Force to go ahead and become an astronaut. But I realized it was much more fun to conceive and build space things than just to fly them. This job is got to be one of the best jobs I’ve had in my entire career, and I’ve had some great jobs. It’s going to be so much fun to succeed in this journey.

Why was Loverro the right person for the job after the nationwide search you said you undertook to fill it?

The other thing that stands out is, when you’re trying to steer a large organization, you got to have this “forcing function.” Doug has an understanding of how the machine works, and can create those forcing functions that a lot of times make bureaucrats uncomfortable. But he forces them to move in the direction he needs them to go. So those are the things that are needed at NASA, and I thought he fit the bill perfectly for the job.

What are you doing to get up to speed with your whole portfolio of programs?

Loverro: The way I learn how an organization works is you go out and meet people, and that’s what I’m doing right now. My important job right now is to understand from the people who work for me what they’re thinking, what their desires are, what their needs are, what their problems are. One of the things I do, and I hope I do well, is to make it permissible to tell me what they really think, tell me what our problems are, tell me what our issues are. We will not get to the moon successfully unless we can look ourselves in the mirror and tell ourselves the truth about where we are, what we’re doing, what our issues are and what strong actions we need to take to solve them. 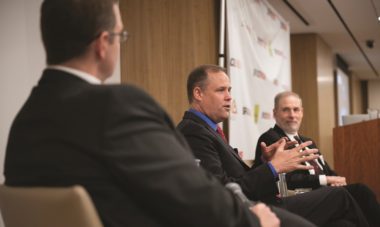 One of those issues is getting SLS and Orion ready for launch. Where are you in determining a launch date for Artemis 1?

Loverro: I’m at the beginning of assessing where the program is. I am not going to go ahead and tell you what the launch date is today because I don’t know. I’m putting together a team that the administrator has let me run that will be a baseline assessment team. I want to understand who all owns this program and how they connect together. Where do we stand right now? What are the individual technical issues that we need to solve? Following that review we will get into a huddle and we will all figure out what the right date is for Artemis 1.

Artemis 1 is important, no question. It will show we have made progress. But that’s another one of those steps on the journey on the moon, and we can’t overly focus on that. Simply delivering on the Artemis 1 launch date without making sure I can follow it with Artemis 2 or Artemis 3 is the wrong thing to do. We’re going to look at the whole program all the way up to the end of 2024, and not just the next step, because that would leave us blind to what lies ahead.

Bridenstine: A lot of people seem to believe that, if Artemis 1 slips, then Artemis 3 isn’t going to make it in 2024, and that is simply not accurate. Artemis 2 is an independent mission from Artemis 1, and if we needed to we could push Artemis 1 back and still make Artemis 2 go on schedule to make Artemis 3 successful. Yet make no mistake, we’re pushing as hard as we can to get going on all of them.

Loverro: It’s a reminder to me and all of us, but it’s more than just a reminder. It’s a celebration of, “What are you going to do today to help us get closer to our goal?” Day 1848 will count in our journey to the moon. What did each of the individuals working on this program — not just senior officials like myself or the administrator or my program managers, but everybody in the chain — do today to go ahead and get us one step closer to the moon?

I want to celebrate one of the heroes within our HEO family every day. Right after the new year we’re going to start doing the “HEO Hero.” Each day we will commemorate one of our HEO Heroes. I don’t care if it’s a Ph.D. engineer or somebody who’s keeping our facilities clean or anybody in between, because each day one of those individuals has led us one step closer to the moon, and that’s what this countdown pin represents.

Loverro: It’s a trade secret how those pins generate themselves.

This article originally appeared in the Dec. 23, 2019 issue of SpaceNews magazine.