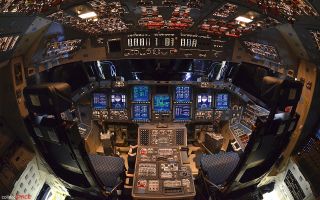 NASA pulled the plug on its last powered space shuttle today (May 11), 20 years after it flew its first mission.

Space shuttle technicians working inside Orbiter Processing Facility-2 (OPF-2) at NASA’s Kennedy Space Center in Florida powered down Endeavour, the youngest of the retired fleet’s orbiters, at 9:58 a.m. EDT (1358 GMT) as they moved forward with preparations for the winged spacecraft’s museum display.

This September, NASA will mount Endeavour on top of a modified Boeing 747 carrier aircraft and ferry it to Los Angeles for its exhibit at the California Science Center.

Built after the loss of the Challenger orbiter in 1986, the shuttle Endeavour was largely assembled from spare parts pre-fabricated during the development of its sister ships Discovery and Atlantis. Endeavour’s first mission, STS-49, lifted off in May 1992.

NASA retired its shuttle fleet in July 2011, and the remaining orbiters are all headed to museums. While the agency is currently using Russian spacecraft to transport its astronauts to low-Earth orbit, U.S. commercial vehicles are planned to take over this taxi service by 2017. [NASA’s Shuttle Program in Pictures]

“The whole thing shutting down is a shame,” Dan Brandenstein, Endeavour’s first commander, told collectSPACE.com just a few hours after he visited his former spaceship last Saturday (May 5). “It is good that they are saving them as museum artifacts, but you have three vehicles that are still good flying machines going on a post or in a display case.”

Endeavour was the last of NASA’s retired shuttle fleet to go permanently dark. Discovery, which was delivered to the Smithsonian in April, was powered down for a final time on Dec. 16, 2011. Atlantis, which is destined for display just down the road from its processing facility at the Kennedy Space Center Visitor Complex, was shut down the following week on Dec. 22.

Endeavour flew its 25th and final mission, STS-134, a year ago this month. The 16-day mission to the International Space Station launched on May 16, 2011.

A unique glimpse of operations at NASA’s Kennedy Space Center in Florida shows space shuttle Discovery, at right, approaching shuttle Endeavour outside Orbiter Processing Facility-3 (OPF-3). Discovery, which temporarily was being stored in the Vehicle Assembly Building (VAB), is switching places with Endeavour, which has been undergoing decommissioning in OPF-1. (Image credit: NASA/Frankie Martin)

Since then, shuttle workers have removed from Endeavour hazardous materials and components that might be used for future spacecraft. This week, technicians removed fuel lines that led to Endeavour’s engines for possible reuse with NASA’s Space Launch System (SLS) heavy-lift rocket now under development.

Astronaut Kevin Chilton, who began his own astronaut career flying as the pilot of Endeavour’s maiden mission, was also there this past weekend to see Endeavour “alive” one last time.

“There’s an emotional attachment, almost human-like, to that hardware,” Chilton told collectSPACE. “I remember after my first flight on Endeavour, and it was her first flight too, starting to walk toward the bus, stopping and turning around to look back at her, sitting there on the ramp.”

“I said [to the shuttle], ‘Thanks, thanks for bringing me home,'” Chilton recalled. “The hardware itself really takes on a life of its own to your life, particularly when it brings you home.”