The NASA Goddard Space Flight Center sets the bar for cutting edge technology and space exploration, but they also are setting the bar right here on Earth for disability hiring and inclusion. I recently had the unique opportunity to visit one of the most interesting agencies in the Federal Government and wanted to share with you some of the innovative things happening there.

The Goddard Space Flight Center has developed an inclusive culture from recruitment, to hiring, through training, and ultimately the retention of people with disabilities. In 2009, the Office of Personnel Management held the first ever Federal Government disability job fair; human resource managers from Goddard attended and actually hired candidates they met using Schedule A hiring authority, which expedites the hiring process for persons with disabilities. The agency also actively recruits folks with disabilities at great science and technology schools. They have a close working relationship with vocational rehabilitation centers, the Workforce Recruitment Program, and the American Association for the Advancement of Science’s internship program for interns with disabilities who feed them highly qualified candidates in Science, Technology, Engineering , and Math (STEM). Thanks to these great practices, the Goddard center has reached its internal agency goals both for disability and veteran hiring. 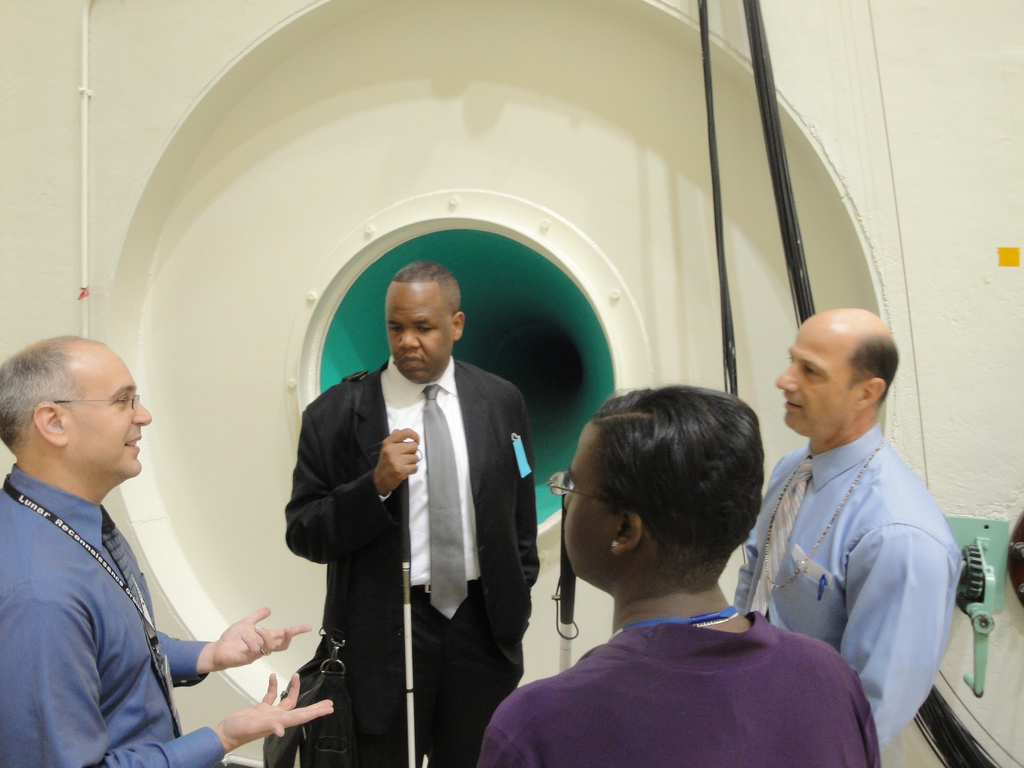 But, for this agency, hiring individuals with disabilities is not viewed as a box to be checked. Goddard ensures that training for new hires is accessible, through a robust feedback mechanism which helps to reduce unintentional barriers. Goddard also offers development and learning sessions for current staff and managers, including the Diversity Dialogue Project which provides a space for conversation where employees can discuss barriers and combat insensitivity. They also run a very popular “Power and Privilege” series where employees can learn about disability history and discuss disability related issues.

Diversity in Goddard’s hiring matches the diversity of the skillsets required to be on the cutting edge of earth and space sciences. We took a great tour of the facility which is currently building and testing parts of the James Webb SpaceTelescope (JWST), a new powerful telescope the size of a tennis court which will be in orbit nearly one million miles from Earth (in comparison, the Hubble telescope was about 350 miles from Earth’s surface). JWST is Hubble’s successor and will enable scientists to help us understand more about the Big Bang.

The diverse employees of the Goddard Space Flight Center are responsible for inception, building, testing, and launching the coolest high-tech stuff around. From a blind equal employment opportunity specialist who welcomed us, to a thermal engineer with a physical disability who showed us a huge machine that simulates the space vacuum and extreme temperatures, to Deaf engineers who showed us mockups and test equipment they designed for the satellite’s data and command center (its brain), this just once again proves that people with disabilities can work anywhere and do anything.