The Outdated Language of Space Travel 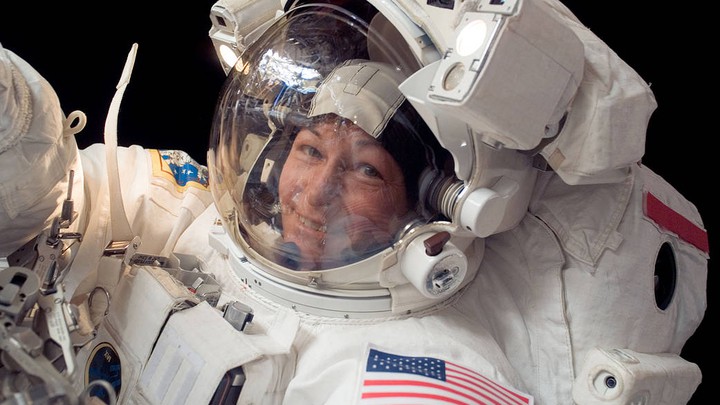 Editor’s Note: This article is part of a series reflecting on the Apollo 11 mission, 50 years later.

Half a century ago, there was only one kind of astronaut in the United States. Men launched atop rockets to space. Men maneuvered landers down to the surface of the moon. Men guided spacecraft safely home. From start to finish, they were at the controls. So it makes sense that the effort to send people to orbit and beyond was called “manned” spaceflight.

But when Peggy Whitson hears someone call the spaceflight program “manned” today, she can’t stifle her physical reaction.

The terminology is simply no longer accurate, and Whitson, a former astronaut at NASA, is just one example why. Whitson served as commander on two missions to the International Space Station, and spent 665 days in space, more than any other American astronaut, man or woman. NASA retired the description years ago, saving it for historical references to its early days, and now uses human and crewed. But as the country commemorated the 50th anniversary of the moon landing last week, the obsolete language cropped up in discussions about the modern American spaceflight program and its future, in congressional hearings, national headlines (some of which were edited quietly after publication), and elsewhere.

It shouldn’t happen again. Manned is a woefully outdated choice of vocabulary to describe the actions of an organization that has employed female astronauts for the majority of its existence. Language matters, and this particular vernacular reinforces the notion, once held to be true, that space exploration is for men only. It does a disservice to the dozens of women who became astronauts after Apollo, and to those who dream of doing the same. “You can’t be what you can’t see,” Sally Ride, the first American woman in space, once said. The same is true of what you can’t hear or read.

In 1962, Congress convened a hearing to discuss the possibility of training female astronauts, after a group of 13 women successfully completed the same tests NASA gave its male candidates, in some cases doing better than the men. “I think this gets back to the way our social order is organized, really,” John Glenn, who had become the first American to orbit Earth only months earlier, told members of Congress. “The men go off and fight the wars and fly the airplanes and come back and help design and build and test them. The fact that women are not in this field is a fact of our social order.”

The group of female trainees was disbanded, and NASA went on to send dozens of men into orbit around Earth and to the moon, their journeys carefully monitored from Mission Control in the appropriately named Manned Spacecraft Center in Houston.

That facility was renamed the Johnson Space Center in 1973, several months after the end of the sixth and final mission to touch down on the moon’s surface. The rebranding was a better match for NASA’s next chapter; the agency had just started sending robotic, passenger-free spacecraft beyond the moon and deeper into the solar system, the first in a long line of machines that would take over the work of exploring the cosmos. Of course, the agency had new terminology to go along with these new spacecraft, programmed and piloted from afar: unmanned.

The push into deep space coincided with the development of NASA’s next generation of astronaut transportation, the space-shuttle program. The massive shuttle could carry far more people than the cramped Apollo capsules, which meant the passenger list didn’t have to be limited, as it had been, to mostly military pilots such as Neil Armstrong. Suddenly, there was room for the astronaut corps to more closely resemble the general population, including the half who had long been excluded.

When NASA selected its first female astronauts in 1978, “manned” was still the standard label for spaceflight that included humans. It did not help that the needs of this new class of astronauts were often, and sometimes astonishingly, misunderstood. Before Ride became the first American woman in space, in 1983, NASA staffers asked her whether 100 tampons would be enough for her one-week mission in orbit.

“When you’re a bloke, terms such as ‘mankind’ automatically include you. You don’t have to think about it at all; you’re already in there,” Alice Gorman, an archaeologist who studies the history and heritage of space exploration, wrote on her blog in 2014. “Women have to ‘think themselves into’ such expressions, even if it happens at a subconscious level.”

Research has found that this feeling of exclusion can have real, measurable effects. Studies by the National Institute of Mental Health in the 1970s, when NASA first began to recruit women astronauts, showed that women were significantly less likely to apply for jobs with titles that ended in man rather than person. A similar effect was found among men, who avoided professions with feminine-sounding names.

Such thinking is difficult to dispel. A study of college students in 1988 found that those instructed to complete sentences about professionals using he and him were more likely to imagine men, even when the researchers said the pronouns applied to both men and women. When the students used gender-neutral language, they pictured fewer men as they wrote.

This subconscious reasoning can take root early. In a 2013 study, when elementary-school teachers described male-dominated professions, such as astronaut, using masculine rather than gender-neutral language, their female students were more likely to think that women in those roles were less successful.

Astronauts who joined NASA in the 1990s say the agency had shifted away from manned and toward gender-neutral language by the time they arrived. But vestiges of Apollo-era vernacular still floated around, in part because many engineers who worked those missions were still at NASA. “There was still a lot of the same—I don’t want to say mind-set in a negative sense—but, ‘We call it this because we call it this, and no one’s ever questioned it,’” says Danny Olivas, who became an astronaut in 1998.

Pamela Melroy, another now-retired astronaut, remembers the terminology coming up in jokes. She joined NASA in 1995, after working as a pilot in the Air Force. When Melroy and a female colleague boarded a T-38, a sleek two-seater jet that astronauts often use for commuting, “the guys out on the flight line would tease me that it was an unmanned mission,” Melroy says.

NASA formally codified its preference for crewed and human over manned to describe spaceflight in the early 2000s, as part of a “major overhaul” of the agency’s internal style guide, says Stephanie Schierholz, a NASA spokesperson. Today the entry appears as follows:

manned, unmanned. Avoid use. In many cases, the distinction is unnecessary or implied. Substitute terms such as autonomous, crewed, human, piloted, unpiloted, robotic, remotely piloted.

“Now if we could just get others to follow suit,” Schierholz says.

The shift in NASA nomenclature did not prompt a massive revision of history books, or a frantic rush to wipe any mention of manned from Apollo mission reports. It sought to capture the reality of the changing organization, an effort that is more common and less fraught than you might think. For example, in 2016, after the Pentagon opened all military combat roles to women, the Marine Corps removed man from 19 job titles.

These days, the idea of an American manned-spaceflight program is a phantom. The proposal for the next moon mission not only includes women astronauts; it is named for Artemis, Apollo’s sister in Greek mythology—a woman, albeit an imaginary one. Donald Trump’s administration has stressed that the crew of the next lunar journey, targeted for 2024, will include the first woman to walk on the moon. NASA needs buckets of money from Congress to carry out the effort, so its immediate future remains uncertain. But whether the next American trip to the moon launches five years from now or 50, it will not be a manned mission.