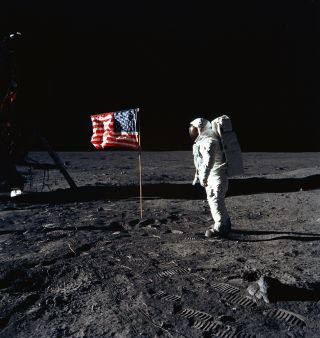 NASA, the National Aeronautics and Space Administration, is the U.S. government agency responsible for leading the nation’s explorations of space. Its mission is “to reach for new heights and reveal the unknown so that what we do and learn will benefit all humankind.” Since its formation in 1958, NASA has taken to the skies both on and off Earth.

Today, NASA consists of 10 different centers spread around the country. But it got its start by scrapping together pieces from existing agencies.

Getting off the ground

As part of the International Geophysical Year (from July 1, 1957, to Dec. 31, 1958), a cooperative effort to gather scientific data about the Earth, President Dwight Eisenhower approved a plan to put into orbit a scientific satellite. The Soviet Union quickly announced its own intentions, and then surprised the world by launching Sputnik 1, the first artificial satellite, on Oct. 4, 1957.

“This had a Pearl Harbor effect on American public opinion, creating an illusion of a technological gap and provided the impetus for increased spending on aerospace endeavors,” NASA’s history website says.

The United States wasn’t far behind their Cold War rivals. After some setbacks and failed rocket launches, the first U.S. satellite, Explorer 1, reached orbit on Jan. 31, 1958. Not content to simply circle the Earth, Explorer 1 sought to study the planet and its environment.

“Explorer 1 was also a science mission,” Willis Jenkins, the program scientist for NASA’s Explorer Program, said on the agency’s website. “This wasn’t just launched to get a satellite up in space, it was meant to bring science data back down.”

Explorer 1 contained experiments that helped to identify the Van Allen radiation belts that surround the planet.

On Oct. 1, 1958, the United States consolidated its space exploration operations under a new agency, NASA, which replaced the National Advisory Committee for Aeronautics (NACA), founded in 1915 to explore aeronautical research when airplanes were just starting to take flight. Also absorbed by NASA were Langley Research Center in Virginia and Ames Research Center in California, both still operational today. NASA also incorporated other science groups, such as the Jet Propulsion Laboratoryin Pasadena, California, and the Army Ballistic Missile Agency in Huntsville, Alabama.

Since then, NASA has launched a series of satellites, orbiters and landers to explore Earth, the moon, other planets and the distant reaches of space. [Space.com Topic: Space History Photos]

On May 25, 1961, only 20 days after Alan Shepard had become the first American to reach space, President John F. Kennedy told the United States, “I believe that this nation should commit itself to achieving the goal, before the decade is out, of landing a man on the moon and returning him safely to Earth.”

With Kennedy’s announcement, getting to the moon became NASA’s priority. The Mercury and Gemini programs tested U.S. technology and human endurance in space. The Apollo program was designed to take the final steps toward the moon. There were challenges and setbacks, such as a fire that killed three Apollo 1 astronauts, but by 1968, the agency sent astronauts around the moon, with Apollo 8. On July 20, 1969, Neil Armstrong became the first human to set foot on the moon, famously declaring, “That’s one small step for [a] man, one giant leap for mankind.”

The Apollo program continued until 1972, with 12 astronauts walking on the lunar surface over 6 landing missions.

A remote camera at the Kennedy Space Center’s Launch Pad 39A captured this scene as the maiden flight of space shuttle Columbia begins on April 12, 1981. Astronauts John W. Young, STS-1 commander, and Robert L. Crippen, pilot, were aboard Columbia as it begins a 54-hour orbital mission. (Image credit: NASA)

Although humans had finished walking on the moon — at least temporarily — NASA continued to send them into space. In 1973, NASA’s Skylab program sent three human missions to stay aboard a relatively small workshop orbiting the Earth. “The Skylab program also served as a successful experiment in long-duration human spaceflight,” NASA’s website says.

In 1975, NASA and the Soviet Union cooperated to achieve the first international human spaceflight, the Apollo-Soyuz Test Project, which successfully tested joint rendezvous and docking procedures for spacecraft from the two nations.

On April 12, 1981, NASA launched Columbia, the first space shuttle. The shuttle fleet eventually added four more ships — Atlantis, Challenger, Discovery and Endeavor — as well as Enterprise, a test shuttle that never made it to space. Two ships were lost in explosions, Challenger in 1986 and Columbia in 2003, but when the program concluded in 2011, it had launched 135 missions and put more than 300 astronauts into space. [Photos: The Milestone Space Missions Launched from NASA’s Historic Pad 39A]

The United States began work on what would become the International Space Station (ISS) in 1984, with Russia and other international partners joining the venture in 1993. On Nov. 2, 2000, the first humans began to inhabit the ISS.

NASA headquarters are in Washington, D.C. Agency leaders there oversee activities conducted at the 10 research centers scattered around the country: