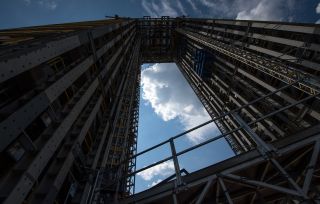 Located in Huntsville, Alabama, NASA’s Marshall Space Flight Center has played a significant role in the American space program. Marshall helped to develop the rockets that carried the first U.S. astronaut into space and those that delivered humans to the moon. Today, the agency is working on the Space Launch System that could one day carry astronauts to Mars.

Shortly before opening the new agency, NASA described the Marshall Center as “the only self-contained organization in the nation which was capable of conducting the development of a space vehicle from the conception of the idea through production of hardware, testing, and launching operations.”

In addition to developing space vehicles, Marshall also participates in scientific programs, helping to develop and test hardware and instruments for projects like the Hubble Space Telescope, the Chandra X-ray Observatory, and the Japanese-led Hinode mission.

Although the Marshall Space Flight Center wasn’t activated until 1960, its roots were well developed. Years before NASA was established, German immigrant Werhner Von Braun and his rocket team, who had developed the V-2 rocket during World War II, had come to the United States with hopes of developing rockets that would one day travel to space.

Initially assigned at Fort Bliss, Texas, the Von Braun team was later transferred to Redstone Arsenal in Huntsville. In the 1950s, the team expanded to include hundreds of American engineers and scientists. On Jan. 31, 1958, they used a modified Redstone rocket called Jupiter-C to launch America’s first orbiting satellite, Explorer 1.

Two years later, Von Braun became the director of NASA’s new George C. Marshall Flight Center in Huntsville. On July 1, 1960, the U.S. Army Ballistic Missile Agency transferred the ownership of buildings, land, space projects, property and personnel to the new agency, which was named for Gen. George C. Marshall. Marshall had been the Army chief of staff during World War II, secretary of state under President Harry Truman, and Nobel Prize winner for the economic recovery program that became known as the Marshall Plan. He died in 1959. President Dwight D. Eisenhower dedicated the fledgling agency on Sept. 8, 1960.

Marshall played a vital role in achieving President John F. Kennedy’s admonition of “landing a man on the moon and returning him safely to Earth.” The center built the Saturn V rocket that would carry the astronauts on their way to the moon.

Marshall also helped to develop the Lunar Roving Vehicle that carried astronauts across the surface of the moon during the last three Apollo missions. The rover allowed astronauts to travel several miles from their landing craft, set up experiments in a wider area and carry home several pounds of rocks.

In the 1970s, Marshall participated in Skylab, the United States’ first crewed orbiting space station and the first U.S. space program completely dedicated to scientific research. Marshall supplied the Skylab workshop, the four Saturn launch vehicles, the solar observatory, and many of the scientific experiments for each of the three astronaut crews.

Also during the ’70s, Marshall helped to develop the space shuttle’s main engines, its solid rocket booster, and its external tanks, as well as a variety of scientific payloads. The agency was responsible for Spacelab, a laboratory carried inside the cargo bay of the shuttle.

When the space shuttle launched on April 12, 1981, it “marked a new era in the history of space flight,” NASA said. “The world’s first reusable space vehicle, powered by Marshall-developed propulsion systems, was thrust into orbit with two astronauts aboard. This new chapter in the history of the Center would feature Marshall at the forefront of the nation’s space exploration efforts.”

After the 2003 Columbia space shuttle disaster, “Marshall and other NASA centers dedicated their work to ensure that the Space Shuttle propulsion elements would perform safely in the future,” the center’s website says.

On Jan. 22, 1986, four Marshall Center facilities were designated as National Historic Landmarks. The Redstone Test Stand static-tested the first rocket that launched Shepard into space, the last step before flight. The Neutral Buoyancy Simulator mimics the weightless environment as preparation for astronauts traveling into space. The Dynamic Test Stand was used for ground vibration tests of the Saturn V launch vehicle and Apollo spacecraft, for tests involving Skylab, and for ground vibration testing of the complete space shuttle vehicle. The Propulsion and Structural Test Facility became the primary center responsible for large vehicles and rocket propulsion systems. On June 15, 1987, the Saturn V Display, an actual test rocket used in the dynamic testing of the Saturn facilities at Marshall, was also designated as a historical landmark.

Marshall continued to propel science forward by playing a role in the development of the Hubble Space Telescope. Launched in 1990, Hubble continues to awe the world with impressive astronomical images after more than 25 years. Marshall also developed and manages NASA’s Chandra X-ray Observatory, which probes the depths of space in the X-ray spectrum.

Marshall is one of NASA’s largest field centers, with over 4.5 million square feet of space. The center boasts test, manufacturing and research facilities. It employs nearly 6,000 civil and contractor employees.

“SLS testing will continue as the core stage structural test articles for the liquid hydrogen tank, intertank, and liquid oxygen tank arrive at Marshall and are loaded into towering test stands to be pushed, pulled and twisted to simulate flight,” NASA said in a press release.

To test the SLS fuel tank, Marshall constructed a pair of twin towers soaring to 221 feet (67.4 meters) in height. The stand simulated the powerful dynamics of launch and flight. For this test, Marshall was crucial.

“There is no other facility that can handle something as big as the SLS hydrogen tank,” SLS engineer Sam Stephens said in a statement.

The primary elements of Orion’s structure are being assembled at the Michoud Assembly Facility in New Orleans, and will be shipped to NASA’s Kennedy Space Center by the end of 2018.

The agency manages the Discovery program of focused scientific investigations that complement NASA’s larger planetary exploration missions. Active Discovery missions include the Dawn mission to Ceres and the Kepler planet hunting space telescope. It also manages the New Frontiers program that conducts robotic missions to explore the solar system. The New Horizons mission to Pluto and the Kuiper Belt, Juno’s mission to Jupiter, and OSIRIS-Rex, the first U.S. mission to return a sample of an asteroid, are all New Frontiers missions.

Marshall Space Flight Center is not open to the general public. However, the U.S. Space & Rocket Center serves as the center’s visitor information center. Here, interactive exhibits and unique historical artifacts help visitors to learn more about Marshall’s legacy and ongoing projects. The center’s admission is:

Discounts are available for NASA civil servants, retirees, contractors, active military and families. The center is open seven days a week, from 9 to 5, though it is closed for some major holidays.

The Space Rocket Center is home of the U.S. Space Camp and the site of the NASA Human Exploration Rover Challenge.

Educational Escapes is a program for elementary and secondary group tours to the Marshall Space Center, and is conducted by the Huntsville/Madison County Convention & Visitors Bureau.

Access to Redstone Arsenal requires a badge and prior approval.