Launch a rocket from a spinning planet

Launch a rocket from a spinning planet

How do space engineers know when to launch?

Well, nothing in space stands still. Everything either orbits around something else, or moves toward or away from something else. So how do space engineers aim a spacecraft so it lands on Mars or meets up with a particular comet or asteroid? Not only are Earth and the target constantly moving in their different orbits around the Sun, but our Earthly launch pad is spinning at about 1,000 miles per hour when we launch the rocket!

If you don’t think this is a hard problem, try this: 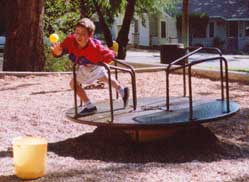 Gather up whatever small balls you have. They can be tennis balls, softballs, whiffle balls, golf balls, or bean bags. Or you can make small “paper basketballs” by tightly wadding up pieces of notebook-sized paper.

Put the balls in a bucket or bag to make them easy to carry.

Find another empty container like a bucket or wastebasket or laundry basket to be the “basket.”

Take the paper balls (in their container) and the basket to the nearest park or playground that has a merry-go-round. (Not the kind with horses, but the kind you push around then hop on and ride.)

Without moving the merry-go-round, try tossing a few balls into the basket on the ground.

Now, leaving the container of balls on the merry-go-round, hop off, push it to get it going slowly (or have someone else push it), then hop back on.

Now, try tossing the balls into the basket on the ground as you go around.

Adding the motion makes it a lot harder to hit your target, doesn’t it? Now imagine the target is on another spinning merry-go-round on the other side of the playground. Even if your paper balls were real basketballs or baseballs, you’d have a lot of trouble.

What you will probably find out is that . . .

In picking a time to launch, space engineers and scientists have to consider quite a number of things. Most of them have to do with getting the biggest boost possible from the big launch pad called planet Earth!

Earth goes around the sun at a brisk 107,000 kilometers per hour (66,000 miles per hour)! If our interplanetary spacecraft is aimed in the same direction Earth is already going, it will get a big head start.

Also, Earth rotates eastward on its axis, one complete turn each day. At the equator, Earth’s surface is rotating at 1675 kilometers per hour (1041 miles per hour)!So if we launch the rocket toward the east, it will get another big boost from Earth’s rotational motion.

Now, we launch eastward. We pick the time of launch (in Deep Space 1’s case, early morning) to give the rocket time to accelerate as it goes partway around Earth. Then, when the spacecraft is headed in the same direction as Earth’s orbital motion around the sun, the rocket gives it a final boost out of Earth orbit and on its way.

Where do we want to go? Once we know that, we figure out the best time of year to launch based on where Earth will be in its orbit around the sun. Deep Space 1 will actually end up in orbit around the sun, too, but farther from the sun than we are. The launch was timed so that, after eight months or so of thrusting from Deep Space 1’s ion engine, the spacecraft’s orbit crossed the orbit of Asteroid Braille on July 29, 1999.

The best times to launch the rocket are called “launch windows.” 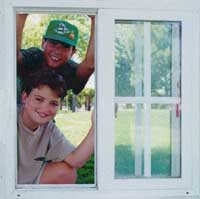 Usually, engineers will try for the beginning of the first launch window. However, several things can delay a launch. For example, the weather might be bad. Or something might suddenly look a little funny with the spacecraft or the rocket or the ground communications. Or a boat or airplane might appear, even though they’ve been warned to keep their distance. Any of these could cause a delay until the next launch window or later in the same launch window.