Ever heard of Kerbal Space Program? Worth playing, nice educative edge. This article is a guide to understanding Kerbal Space Program in Career Mode and understanding how to make successful flights. Although there is also a lot of fun and lessons to be learned in blowing things up! Kerbal Space Program (commonly abbreviated by KSP) is a space flight simulator currently developed by Squad. Although referred to as a space flight simulator, in this article KSP is also referred to as a game. KSP is available for Windows, Mac OS X and Linux. The game has a very extensive Modding community, adding features and improvements via third party Mods.

Some notable differences and similarities can be found between our own Solar System and the KSP Solar System, named Kerbol System. Analogous to Earth, there is the home planet Kerbin, not inhabited by Humans, but by Kerbins. Kerbin has two natural satellites one called Mun and the other Minmus. The sun is called Kerbol and analogous to Mercury, Venus, Mars and Jupiter are respectively: Moho, Eve, Duna and Jool [1] .
A very distinctive difference between our Solar System and Kerbol is that the planets are almost 10 times smaller, but retain their density, making the planets 10 times more massive, which is by some noted as being physically unrealistic. Others find practical application for educational purposes, like Chris Bush, a teacher at Zion Benton Township High School at Kenosha, Wisconsin, USA. Mr. Bush used Kerbal Space Program as a teaching tool in his Advanced Placement class [2] .

Whatever you do in Kerbal Space Program, it most probably involves blowing things up and explosions; either intentionally or unintentionally.

Never be afraid to fail. Failure is only a stepping stone to improvement.

Key bindings: how to take control

Knowing how to use your keyboard in Kerbal Space Program is very important to be effective.
Your primary source for what keyboard keys do, read: Kerbal Space Program Wiki: Key Bindings.
Please get familiar with the terminology such as: Extra-Vehicular Activity (EVA), Intra-Vehicular Activity (IVA), Stability Augmentation System (SAS) and Reaction Control System (RCS). Prior to KSP 0.21 SAS provided torque, but no automatic course correction, KSP 0.21 and later provide both.

Apart from keyboard keys, you can use the right mouse button for options of a specific part of your rocket. Including the option to transfer fuel between tanks.

The most important Key Bindings are:

Building a rocket is done in the Vehicle Assembly Building (VAB). The Kerbal Space Program Wiki has a 45 minute Tutorial concerning Basic Rocket Design, I can recommend starting there.

Got your rocket? Rule of thumb for flying: 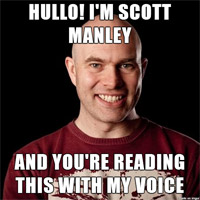 Even more fun are the video’s of Scott Manley, who you will not only soon love because of his awesome Scottish accent, but his expertise as well. Video’s include, Scott Manley on YouTube:

Scott Manley, combines his enthusiasm for gaming and science into his Scott Manley YouTube Channel. Having worked on his, unfortunately unfinished, PhD in the field of Small bodies in the Solar System: Asteroid Discovery 1980-2010 (interesting video) at Armagh Observatory, a Bsc in Astronomy and Physics and a Msc in IT in Glasgow, you as Kerbal Space Program player, have all the reason to keep an eye on his great videos.

Key to being successful: baby steps! First get a basic rocket in orbit, then read this section.

Advanced Rocket Design in this article has fuel-efficiency at its core: getting farther with the same amount of fuel by using fuel smarter.
An increase in fuel efficiency of +449.0% (factor +5.490) will be demonstrated below between Single Stage design and Asparagus design. Mechjeb is used to remove human error: exact same flight/ascent path applies to all tests. Identical rockets used between tests to reach a 150,000 m circular orbit around Kerbin.
The yellow arrows

show the fuel flow (fuel flows to where the arrow is pointing) from the External Fuel Ducts.
Be advised: Staging occurs from higher numbers to lower numbers; i.e.: first S4, then S3, then S2, then S1. 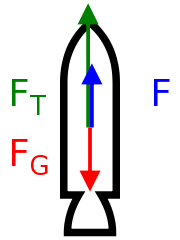 Asparagus design increases performance greatly. Key in the asparagus design is the Thrust-to-Weight Ratio (TWR). By separating stages (in order: S4, S3 and S2) during flight as the fuel tanks become empty, you eject dead weight and thus increase the Thrust-to-weight ratio. A TWR between 2 and 3 per stage is advised to escape Kerbin.
A mod is available for showing the TWR per stage and the TWR on other celestial bodies in the Solar System , Kerbol System. See Kerbal Engineer Redux managed by cybutek on www.curse.com/ksp-mods/kerbal. Special thanks to Plur303 for running the tests.

The Kerbal Space Program Wiki states the following: “The thrust-to-weight ratio (TWR) is a ratio that defines the power of a craft’s engines in relation to its own weight. If a craft needs to get into a stable orbit or land safely on the current celestial body without using parachutes, then its engines must put out more thrust than its current weight to counteract gravity.”

See picture at the right: The TWR is the ratio of FT (Thrust Force) and FG (Gravity Force). F (Residual Force) is pointing upwards if the TWR > 1 (your rocket will go up), downwards if TWR FT are equal).

A problem that may arise when using asparagus design is unwanted rocket spin/rotation, which can be countered with correct strut usage, see tutorial on YouTube: KSP: Asparagus/Onion Rotation – Stop that Spin! (tutorial).

Get your rocket into orbit: Orbital mechanics

Getting your rocket up there (70,000+ m) might already be hard enough, but what about staying up there?
What about changing orbit? Known and understand the basics of Orbital mechanics.

Sphere Of Influence (SOI) and Orbit 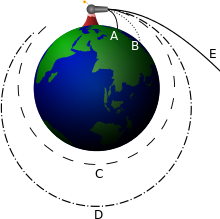 It is a common misconception that astronauts in orbit are weightless because they have flown high enough to “escape” the Earth’s gravity. In fact, at an altitude of 400 kilometers, equivalent to a typical orbit of the Space Shuttle, gravity is still nearly 90% as strong as at the Earth’s surface. Weightlessness actually occurs because orbiting objects are in free-fall [3] , resulting in the apparent state of weightlessness. The same mechanics count for Kerbin.

Eccentricity is the ratio of the distance difference of the apoapsis and periapsis, and the major axis of an ellipse (planetary orbit). Eccentricity is shown by the formula:

There are more Orbital parameters, read about the Longitude of the Ascending node for example.

Whenever you want a new challenge try to create your own Geostationary Satellite Network.

Get your rocket into orbit: Understanding the interface and Navball 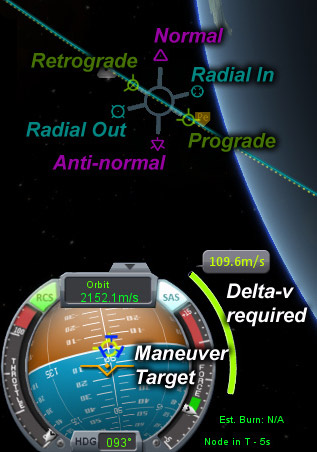 The Navball is an extremely helpful tool in maneuvering your rocket:

In order of appearance: prograde (speed up), retrograde (slow down), normal (increase inclination), anti-normal (decrease inclination), radial (in) (burn towards the planet / turn orbital plane clockwise around rocket), Anti-radial (out) (turn away from planet / turn orbital plane counter-clockwise around rocket). Just point the yellow direction pointer c.q. level indicator at one of these maneuvers and increase throttle to perform a maneuver.

To ease maneuvering, one can add a maneuver node, this can precision and thus effectiveness and efficiency of a maneuver. After setting a maneuver node, point the yellow direction pointer at the dark blue Maneuver marker .
When using a maneuver node, the Delta-V required to make the maneuver is shown on the right of the Navball together with the duration of the required burn (see “Est. Burn”) in the lower right corner. Below the “Est. Burn” one can see when the rocket reaches the created Manever node.
Tip: start your Maneuver node burn not on “Node in T – 0s” but at “Est. Burn” devided by two.
Example: the Est. Burn duration is 30 seconds. Start your burn, full throttle, at “Node in T – 15s” and stop at “Node in T + 15s”. This way your burn is done in optimal timing: not to early, not too late.

Get your rocket into orbit: Practical example

After you build a rocket, you want to get it up there, into orbit. To do this in a fuel-efficient way, we use a gravity turn.

A gravity turn is a maneuver used to launch a craft into, or descend from, orbit around a celestial body (e.g. Kerbin) while using minimal fuel. In order to escape the surface, a craft must rise faster than gravity pulls it down. In order to maintain a stable orbit, the craft must have enough sideways momentum (+/-2200m/s at Kerbin) at a high enough altitude (70,000m at Kerbin) to avoid colliding with any surface features or getting slowed down by the atmosphere. A gravity turn combines these two steps into one maneuver, saving fuel in the process. As a craft starts ascending vertically, it slowly turns to the side until by the end of the turn it points sideways.
At Kerbin: go straight up for the first 10,000m, then turn your rocket east 45 degrees. When you are near 70,000m turn to 90 degrees and create a circular orbit.

Scott Manley has created a helpful tutorial explaining for to orbit Kerbin, so I advice to watch this:

Get your rocket down to Kerbin: Deorbit

How to get maneuver nodes?

How to get Science

How to get Money

A broad community behind Kerbal Space Program creates modifications (short: “mods”) to the original game. These mods make all kinds of changes to the game, including: off-world refueling (Karbonite), autopiloting, additional flight information, extra planets in Kerbol System and additional parts.
It is confirmed that an adaption of Roverdude’s Karbonite mod will be included in Kerbal Space Program 1.00. this enables players to refuel their space crafts on other planets in the Kerbol System.

In general Umbra Space Industries mods feature some great additions to KSP, check it out!

Read more about the best mods in detail.

Kerbal Space Program is a very cool simulation game.
There are some bugs in version 0.90 BETA that need to be resolved. On my part the most annoying bugs are:

Interesting Space Mission tips to explore after this guide are:

If you’re not convinced about if the game is worth playing, watch this 4 minute trailer: