Learn to watch ISS moving silently and steadily across your night sky, and think of the 3 astronauts currently on board. 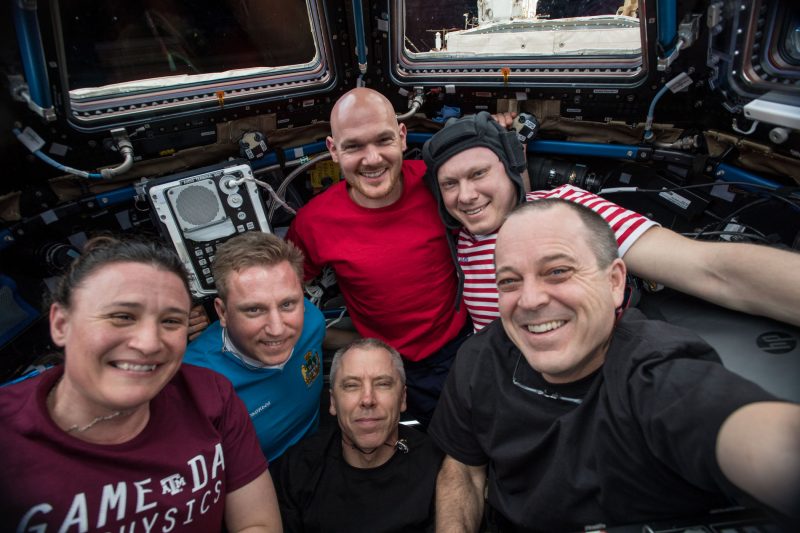 The three astronauts now aboard the International Space Station (ISS) were supposed to be joined on Thursday – October 11, 2018 – by two new crewmembers. But a problem several minutes into launch sent the two new ones – NASA astronaut Nick Hague and Russian cosmonaut Alexey Ovchinin – plummeting in “ballistic mode” back to Earth. Both Hague and Ovchinin made it to the ground safely. Learn about the immediate future for the three astronauts currently aboard ISS here. Now on board ISS are NASA astronaut Serena Auñón-Chancellor, Russian cosmonaut Sergey Prokopyev and European Space Agency astronaut Alexander Gerst. Think of them as you read this post and learn to spot ISS in your sky. 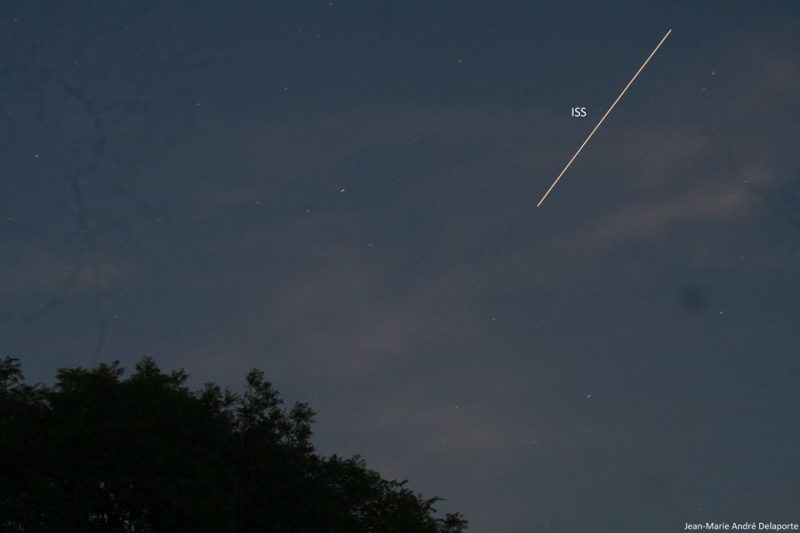 The International Space Station (ISS) has been orbiting our planet since 1998. From most locations on Earth, assuming you have clear night skies, you can see ISS for yourself. To us on Earth, it looks like a bright star moving quickly from horizon to horizon. As suddenly as it appears, it disappears. How do you know when to see ISS pass overhead from your location?

NASA has a great tool to help – the Spot the Station program lets you sign up to receive alerts to let you know when ISS will be visible from your location – anywhere in the world. Plus there’s a map-based feature to track when to look for the station as it flies over you in your night sky.

You can also sign up for alerts via email or text message. Typically, alerts are sent out a few times each month when the station’s orbit is near your location. Visit the Spot the Station website to sign up, and see a list of upcoming sighting opportunities. 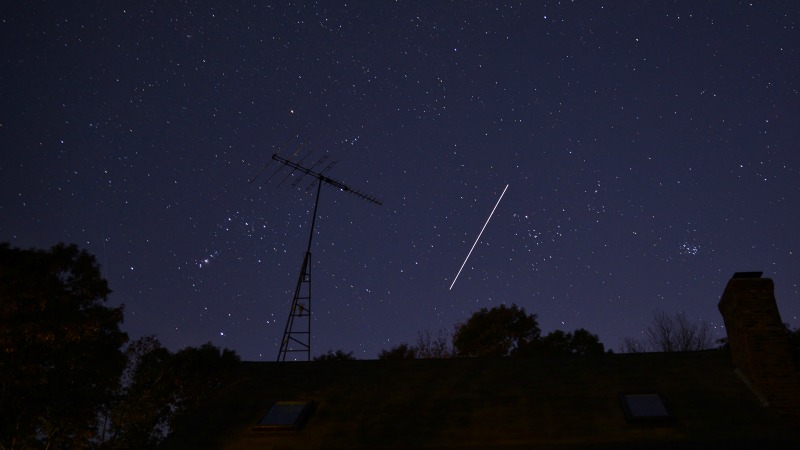 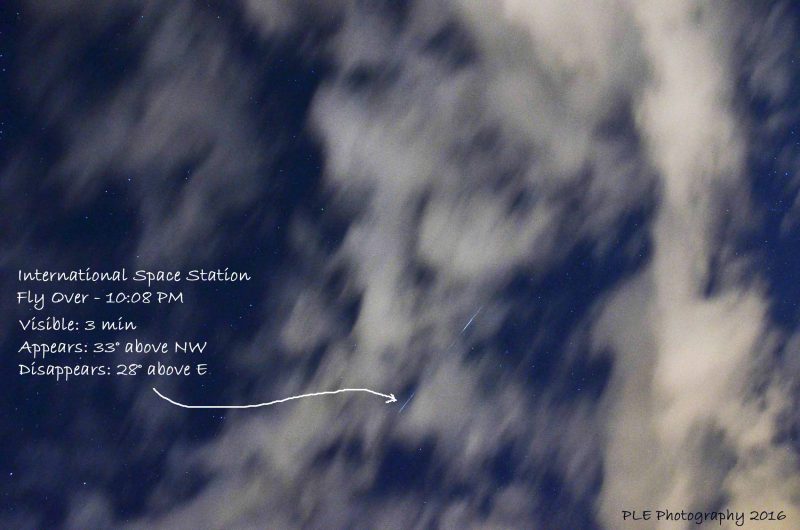 Patricia Evans in Seabrook, New Hampshire, caught this ISS flyover through clouds on June 9, 2016. She wrote: “It moved quickly and silently overhead towards the east.”

If you sign up for NASA’s Spot the Station service, notices will be sent to you only when ISS will be clearly visible from your location for at least a couple of minutes. If you live north of 51.6 degrees latitude (for example, in Alaska), you will likely have to visit the website to find sighting opportunities because notifications in this region would be rare. 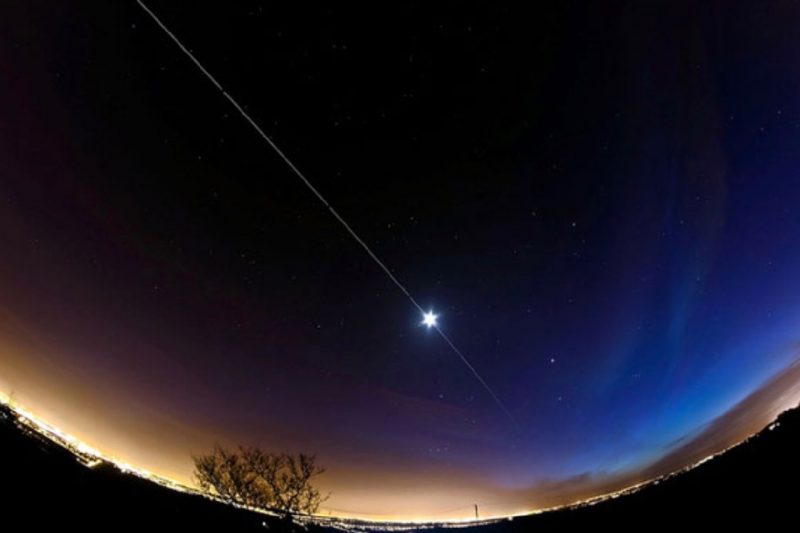 A composite photograph of an International Space Station flyover, taken from the U.K. Image via Dave Walker.

The notices contain information on where to look for ISS in the night sky. Just note where the sun sets and you can easily find the direction where the station will appear (for example, in the southwest or in the northwest). The height at which the station will appear is given in degrees. Just remember that 90 degrees is directly over your head. Any number less than 90 degrees will mean that the station will appear somewhere between the horizon and the 90 degree mark. The station is so bright that it is really hard to miss if you’re looking in the correct direction. Alternatively, you can stretch out your fist at arm’s length toward the horizon, which is equivalent to about 10 degrees. Then, just use the appropriate number of fist-lengths to find the location marker, e.g., four fist-lengths from the horizon would be equivalent to about 40 degrees.

NASA’s Spot the Station program is great. I’ve seen the station fly over many times now, and it’s a pretty amazing experience.

The first module of ISS was launched into space in 1998 and the initial construction of the station took about two years to complete. Human occupation of the station began on November 2, 2000. Since that time, ISS has been continuously occupied. ISS serves as both an orbiting laboratory and a port for international spacecraft. The primary partnering countries involved in operating ISS include the United States, Canada, Japan, several European countries and Russia. 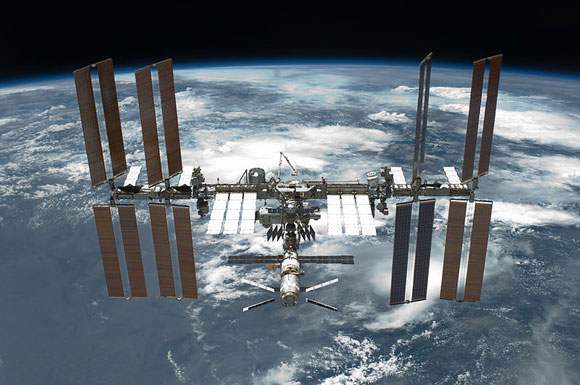 Photo of the International Space Station taken from the space shuttle Endeavour on May 30, 2011. Image via NASA. 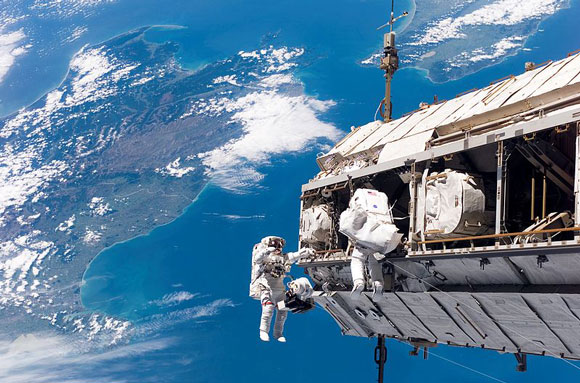 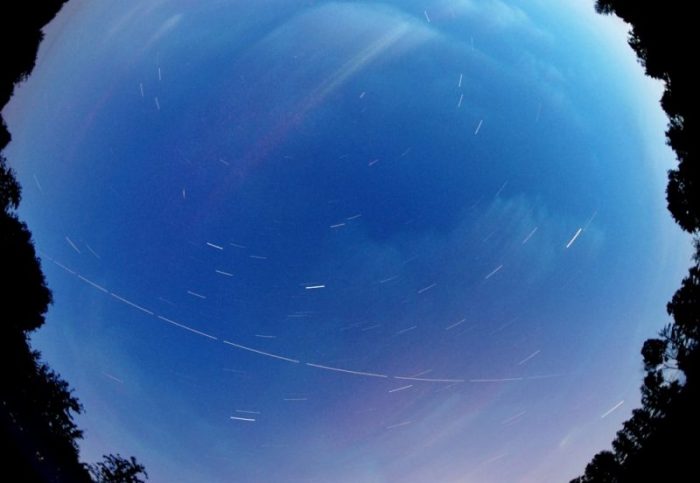 ISS crossing the sky in a long-exposure photograph by Antonín Hušek.

Bottom line: Learn to watch the International Space Station (ISS) moving above your location, and think of the 3 astronauts currently on board.