The forgotten bravery and latent tragedy behind the famed orbiter’s maiden launch. 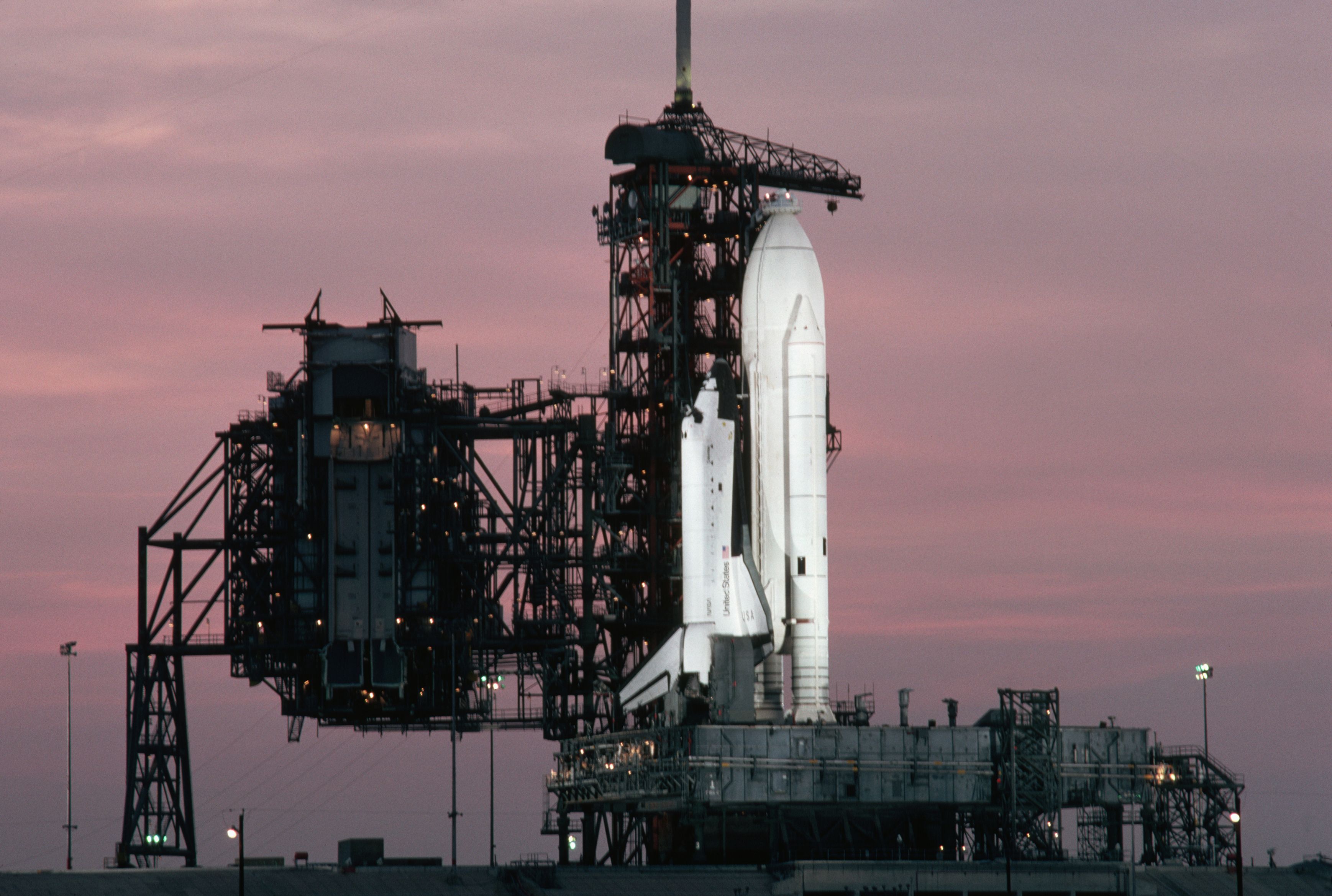 This weekend legendary astronaut John Young succumbed from complications with pneumonia. The fighter pilot turned astronaut leaves behind an amazing legacy as an astronaut on the first crewed flight of the Gemini program in 1965. Four years later he was flying around the moon in a dress rehearsal for Apollo 11, and in 1972 Young walked on the surface as commander of Apollo 16.

These feats rightfully will be the cornerstone of his legacy, but Young was also at the center of the creation of a new NASA vehicle. It was named the Space Transportation System, but everyone called it the Space Shuttle, and the first flight of the shuttle Columbia would prove the spaceplane design worked—but it would also presage its ultimate demise.

On April 12, 1981, the two-man crew of STS-1 felt like they had something to prove. Packed with a steak and egg breakfast, the two men sat inside the Space Shuttle Columbia’s cockpit, staring at the sky. This was a milestone flight for them, personally, and the tension to get underway was palpable. The rookie, Robert Crippen, had never been to space before. For the veteran commander, John Young, this was the start of a new age of manned spaceflight, a legacy for the next generation to follow. 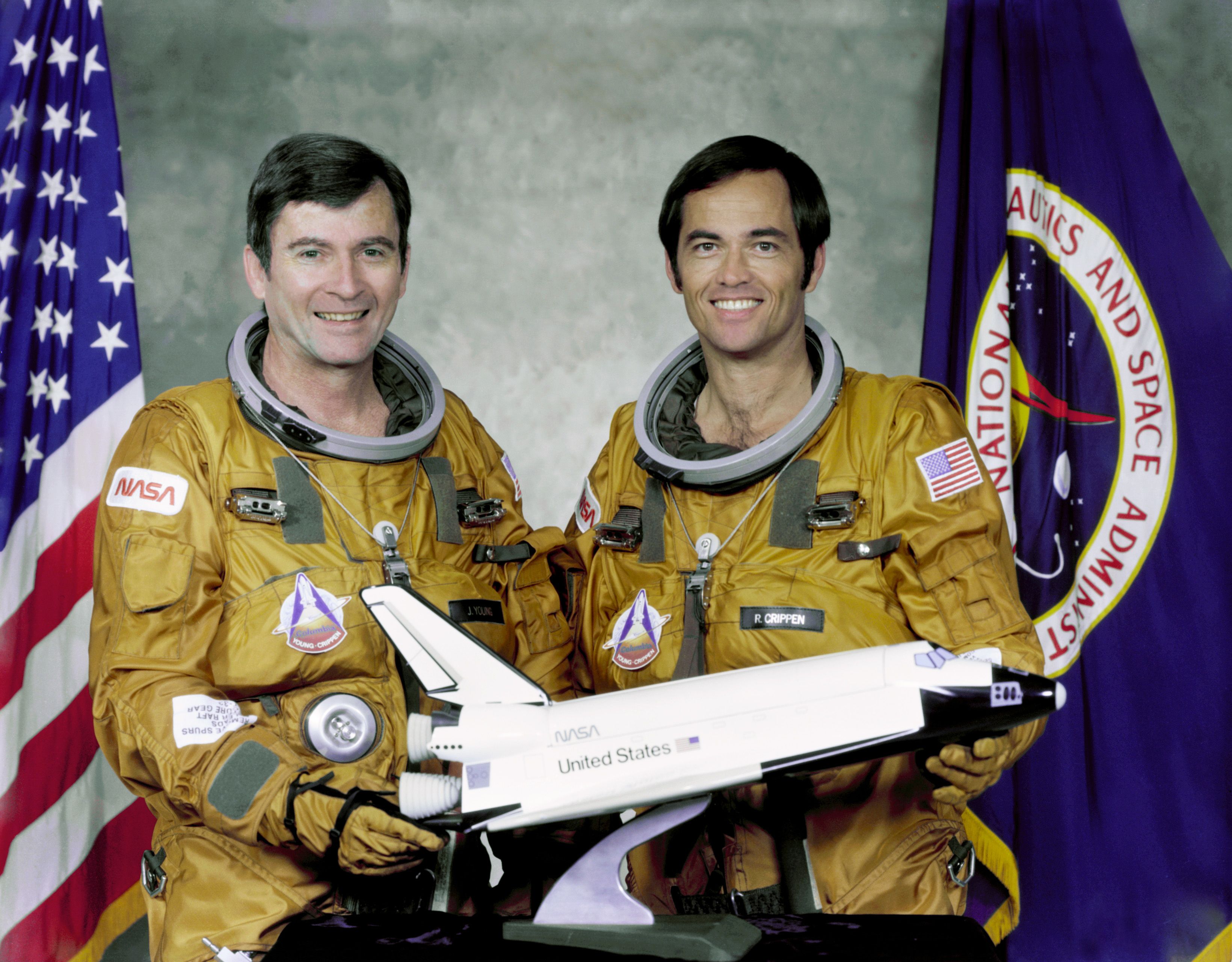 Negative chatter about the Space Shuttle had dogged the program nearly from its inception. The first launch suffered a year’s worth of delays, and the shuttle sat four months on the launch complex 39 as new problems mounted. After the ground team filled the external tanks, they discovered that 32 gaps where panels of insulation on the tank had fallen. Without that insulation, hard sheets of ice could form and break off break off during launch, damaging the heat tiles that protect the shuttle from the searing heat of reentry.

Newspapers routinely quoted skeptics who say the program is doomed, and a fatal accident that asphyxiates two ground crew members didn’t help. Slowly, the talk began to chafe at the astronauts.

“Two weeks before we launched, they said the space shuttle was a lemon.”

“Two weeks before we launched, they said the space shuttle was a lemon,” Young would later say in a NASA newsletter. “Right about then, everybody was down on the United States.”

But despite it all, the Shuttle captured people’s imagination. Nothing like it has ever flown before, and thousands gather across Florida to watch it blast off.

From Ace Pilot to Astronaut

Even NASA didn’t know what’s going to happen. In the 21st century, manned spacecraft are tested with unmanned flights before a human steps inside. In 1981, test pilots are the best pieces of equipment to deal with emergencies. and taking risks is what being an astronaut is all about.

Young’s background as a test pilot informs his point of view as he lobbied to fly the shuttle on STS-1 and land it at Edwards Air Force Base in California.

“I went to many, many meetings where they wanted to fly the thing unmanned.” Young later told COLLECTspace.com, but finally the program manager, John Yardley, said he wasn’t going to come across California with nobody in the spacecraft. “So, we got to fly it manned.”

Back in the cockpit, the engines flare to life at 7am and seconds later, Columbia is on her way. The trip up is not picture perfect, since the shuttle pitches up steeper than expected, but it’s close enough. Ten minutes later she’s in orbit, the first winged craft to ever do so.

But getting home safely two days later will be another trick altogether. 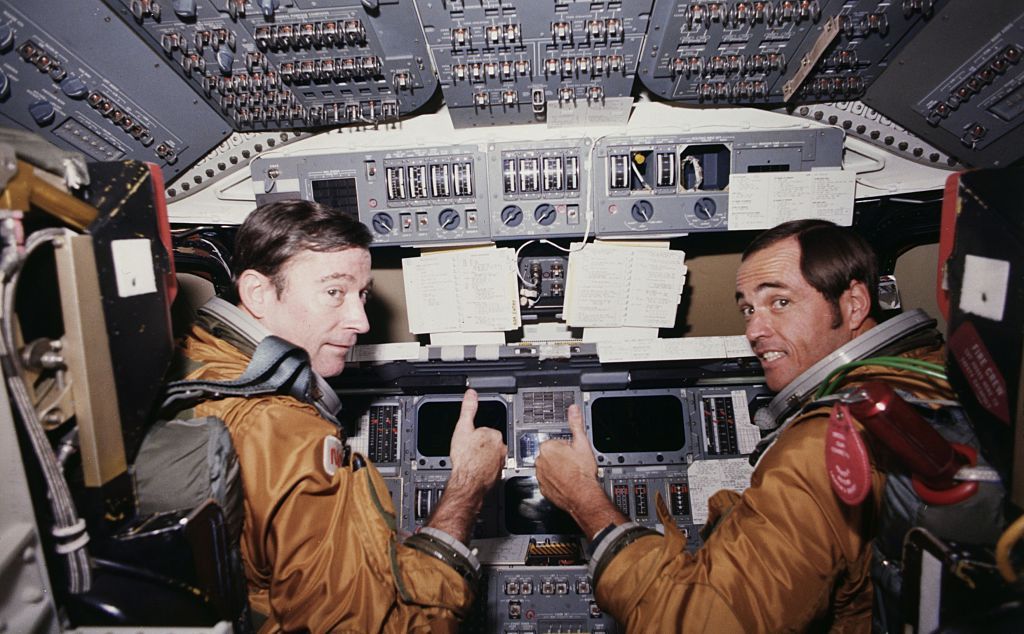 But most of all, there are unknown aerodynamics—no one had ever steered a spacecraft like this down to Earth before. They’d have to recreate the conditions on Earth in order to prepare.

“They used wind tunnels to predict what the parameters would be along the corridor, measured their ability to predict these phenomena, and pored over flight data from research aircraft such as the X-15 and the YF-12,” as described in a NASA newsletter.

Those jet planes, piloted by The Right Stuff vintage test pilots, had proved that aircraft and people could control flight at high speeds and altitudes. But the Columbia’s reentry profile is faster and longer than anything ever attempted. The way down requires piloting at multiple Mach speeds, each with separate aerodynamic conditions.

“I still wasn’t sure this sonofabitch was gonna fly.”

In comparison, dropping an uncontrolled capsule is an easy engineering exercise, and it’s why modern companies like Boeing and SpaceX are using familiar, gumdrop-shaped craft instead of spaceplanes to launch cargo and (hopefully in 2018) manned capsules to the International Space Station. Things that just drop are inherently simpler than an aircraft that has to maintain control. so Columbia’s designers must account for these changing conditions by being flexible.

“They varied the gains all through those Mach numbers, adjusting the flight path angle here, the angle of attack there, until the aerodynamic factors, the thermal constraints and the structural integrity of the vehicle were all harmoniously balanced,” NASA says of the STS-1 engineers.

The reentry is undeniably scary and there are doubts—even inside NASA—that the spacecraft would work. “Even with all of that testing,” Chris Kraft, former director of the Johnson Space Center, said a decade after the flight. “I still wasn’t sure this sonofabitch was gonna fly.”

Young and Crippen must test everything on the brand new space shuttle, and that includes the massive doors of the payload bay. This is where the shuttle will one day carry satellites and pieces of the International Space Station. On the inaugural trip the cargo bay has two experiments, “Developmental Flight Instrumentation” and the “Aerodynamic Coefficient Identifications Package.” These measure a slew of data — temperature, pressure, acceleration, and such —during the flight.

The doors work fine, opening like clamshells to access the vacuum of space. The open doors also enable the astronauts to see hidden parts of the shuttle. What they reveal is worrying: signs of damage to the heat shields protecting the Orbital Maneuvering System pods next to the shuttle’s vertical stabilizers. OMS pods’ main jobs are to provide some oomph to get into the right orbit, stay there, and at mission’s end to push the shuttle on its path to get back down to the planet. The thrusters flare periodically to keep the shuttle’s nose oriented down. But damage to the pods is not the chief concern. If these tiles are damaged, does this mean that the tiles on the shuttle’s belly, which must take more heat, are also damaged? There is no way for mission controllers to answer, but there’s nothing to be done but to just see what happens.

As it turns out, there’s more damage than they know. During launch, chunks of ice falling from the external tank scrapped and pitted 300 heat shield tiles. Even worse, the exhaust from the solid rocker booster caused a pressure wave that bent a nearby strut.

Knowing none of this beyond the damaged tiles he can see, Young starts the journey home with a phrase: “Go for the deorbit burn. Thank you now.”

Columbia is over the Indian Ocean, on its 34th orbit of STS-1, when Young fires the OMS thrusters and aims the shuttle toward earth. Crippen, a new resident of space, can’t help but stare out the windows at the view. The Apollo vet is also confident as the big drop starts.

“I wanted to stay up there another two or three days to see how it really worked.”

“Don’t ask me why I knew,” he recalled later. “I just had a feeling that when we started re-entering that it would go great. The shuttle was working so well, I wanted to stay up there another two or three days to see how it really worked.”

The 15 minutes it takes the shuttle to return to Earth feels even longer without radio communication due to the hellish cocoon of superhot ionized plasma that surrounds the shuttle as it tears through the atmosphere. The first hint that the craft has survived is a return on a radar screen, followed by Young reporting that all’s well.

“What a way to come to California,” Crippen says.