Got my first job! Working at NASA

In this series, recent grads share their journey to landing that first job out of college. After years of studying and working toward a degree, these Panthers’ hard work paid off. Now they’re paying it forward by letting you know how they did it.

Where are you working? I work for NASA at the NASA Marshall Space Flight Center as a tribology and metrology engineer. We run tests for evaluating oils, greases, dry film lubricants and coating on materials, and we run inspections to determine the wear in mechanics.

How did you get your job? I got my job by applying online for a full-time position at NASA through USA Jobs, which is a government website with job opportunities within federal agencies. I honestly didn’t know if my application would be looked at, but to my surprise, I received a call for an interview within a couple of days and thanks to my preparation I was hired for the job.

What was your greatest fear going into your first job and how did you face it or overcome it? My greatest fear going into my first job was that I was nervous that my English would be a determining factor in my success. I was afraid I was not going to understand the technical parts of the discussions. I also began to doubt whether I was the right person for the job. Working hard and dedicating my time to this job helped me a lot to overcome this fear. Every day at home, I dedicated some time to review and research what I am learning/working on and after many hours of reading and asking questions I became much more proficient and learned more technical vocabulary.

What surprised you the most about your first job? What surprised me the most about my job here at NASA is that I was expecting to be working among very smart people who would not be willing to share their knowledge, but it turns out I was very wrong. I ended up working alongside talented engineers who were eager to hear my opinions and happy to discuss my thoughts about any issues during meetings.

What advice do you have for those beginning the job search process? I really encourage students to do research and try to get involved in any activities that involve science—science projects , student events or competitions. This will not only help your career path, but it will also help you grow as a professional. Also, get involved with job fair events at FIU. I participated in every single one and once I knew about my interview for this job, I participated in a mock interview workshop, which are done through CEC’s Career Services Team at FIU. I went there several times until I felt ready for the real job interview.

What does a day on the job look like? Every day is a challenge and every day is an opportunity to create. Working in the labs gives me the opportunity to be creative and responsive. At the same time, working from my office gives me an opportunity to talk with other engineers, technicians and co-workers to see the agency from different perspectives and observe how all the work I do in the labs can benefit the NASA mission that varies depending on which project is being worked on.

How does your job connect back to your coursework? In engineering everything is connected. People tend to think of science, engineering and technology as three separate things, but they’re actually closely connected. In the same way, the coursework learned in college is applied every day, not only at work but in everything around us. Scientists use the technologies that engineers create and engineers rely on the knowledge of the natural world developed by scientists. Just thinking about cars, airplanes, cellphones, etc. is a demonstration of this relationship.

How was your transition from school to work? How do you balance your time? Having more free time, allowing me to concentrate on what I want. Now, I use to-do lists and I am getting better at prioritizing tasks. Also, I have more time to read about those aspects of my job that I want to be better at. When I was still in school, balancing the time between the labs and the office helped me to become more organized today. 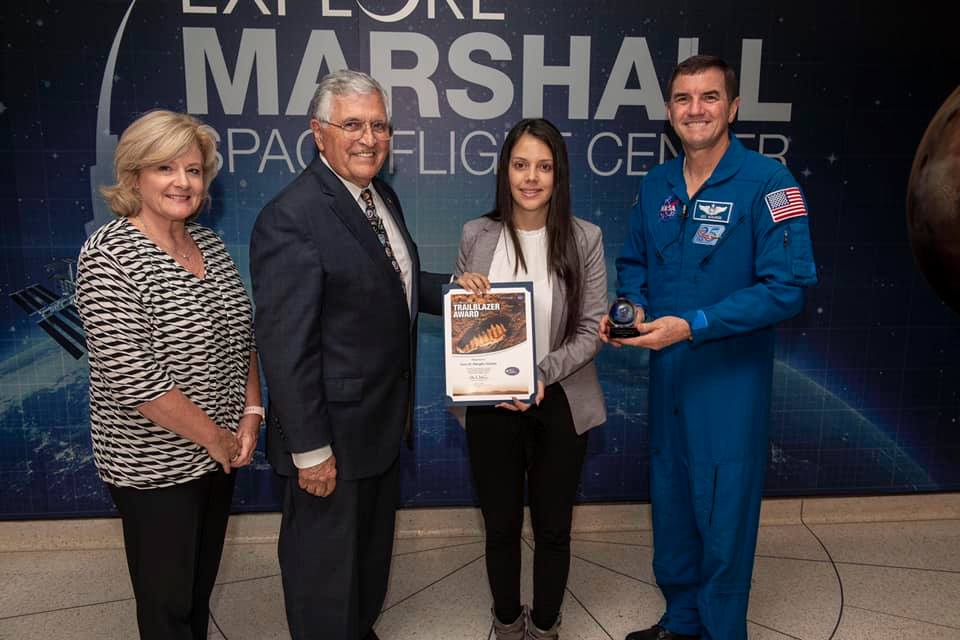 Rengifo is with astronauts Harrison Schmidt (U.S. Senator and retired NASA astronaut, the most recent living person who has walked on the Moon) and Rex Wilheim (NASA astronaut), and MSFC Center Director Jody Singer.

Sara just received a prestigious Trailblazer award given “to recognize employees who are in the early stages of their career. Awardees must demonstrate strong work ethic and creative, innovative thinking in support of human spaceflight” at NASA’s Marshall Space Flight Center, where she works as a Tribology and Metrology Engineer.