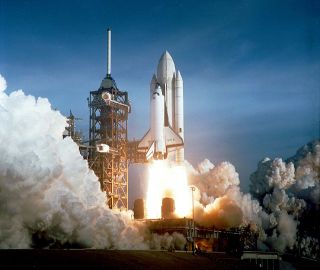 Columbia was the first shuttle to reach space, in 1981. Columbia carried dozens of astronauts into space during the next two decades, reaching several milestones. Columbia also underwent upgrades as technology advanced.

However, the shuttle and a seven-member crew were lost over Texas when Columbia burned up during re-entry on Feb. 1, 2003. Columbia’s loss prompted NASA to do extra safety checks in orbit for all future missions.

Columbia at a glance

Discussions on developing a reusable spacecraft began in earnest in 1966, when NASA was looking to figure out what programs would come after Apollo. While NASA was tasked with beginning the work, development was held off for years by budgetary constraints, according to NASA history documents.

Work resumed more seriously when the first landing on the moon was imminent, in 1969. At that time, then-President Richard Nixon appointed a Space Task Group to look at future space options, and in subsequent years NASA began awarding design contracts for shuttle ideas.

Some compromises were made in the design in response to budgetary constraints and input from the military, which was expected to be a major customer of the shuttle. For example, the size of the cargo bay was increased to accommodate large military satellites. Also, it was decided to make the shuttle only partially reusable instead of fully reusable to save on development costs, although critics noted this would increase the costs of individual flights.

Construction began on a prototype on Jun 4, 1974. That spacecraft was designated Enterprise. Its purpose was to perform test flights and landings. It never flew into outer space. Construction on Columbia began on March 27, 1975. The name Columbia has several origins:

Columbia’s first flight took place on April 12, 1981. The shuttle program was officially referred to as the Space Transportation System (STS), so this flight was STS-1. The mission had a two-person crew: the commander, John Young, a veteran of Gemini and Apollo, and the pilot, Bob Crippen. The objective was to make sure that Columbia worked well in space.

Media attention in particular focused on the new system of tiles covering the shuttle, which NASA had struggled with in early days, according to a NASA history on developing the space shuttle. Happily, Columbia came back safely. Several more test flights ran between 1981 and 1982. This included perhaps the most dramatic landing of the shuttle program, STS-3.

An “autoland” system malfunctioned before landing on STS-3; the crew took over (as planned) just before landing, but the shuttle touched the runway faster than normal. After landing, Columbia’s nose pitched up unexpectedly due to a software problem, according to commander Jack Lousma’s oral history with NASA; it looked as though the shuttle was bobbing on the runway.

The first operational flight for Columbia was STS-5 in November 1982. New shuttle Challenger took on the next three flights, and then Columbia flew once more in November 1983, carrying the Spacelab experiment module for the first time as well as the first European Space Agency astronaut.

Columbia was then shelved for major upgrades (including adding heads-up displays) before flying on just one mission in 1986; that mission carried Democrat Bill Nelson on board, among the astronauts. Shuttle operations were interrupted by Challenger’s demise in January 1986. It wouldn’t be until 1989 that Columbia flew again.

Columbia flew 28 missions in its lifetime, logging more than 300 days in space. In its earliest days it participated in repairing and deploying satellites and telescopes, but as NASA’s priorities changed to science, Columbia flew several productive science missions in the 1990s and 2000s.

Over the years it flew several microgravity laboratory missions and did a tethered satellite system experiment, among other things.

In 1999 and 2002, though, Columbia shifted operations back into telescope operations. STS-93 was scheduled to fly on July 20, 1999, to send the Chandra X-Ray Observatory into space.

A suspected hydrogen problem scrubbed the initial launch only seven seconds before liftoff, but upon further examination NASA determined that the high readings were false.

Columbia lifted off on July 23, 1999, but its orbit was seven miles shallower than planned due to a slightly early main engine cutoff. Adjustments in orbit were necessary to bring Columbia to the correct altitude. The crew successfully let go of Chandra during the mission.

Columbia’s 2002 mission consisted of telescope repair, as the STS-109 crew did servicing on the Hubble Space Telescope. Over five spacewalks, several astronaut crew members replaced an aging power control unit, removed and installed solar arrays and did science instrument upgrades. Servicing time hit a record, at the time, of 35 hours and 55 minutes.

This would be Columbia’s next-to-last mission in orbit, although nobody knew it at the time.

As the shuttle went through the final minutes of its re-entry on Feb. 1, 2003, NASA lost contact with the shuttle over Texas. Controllers spent several minutes trying to hail the shuttle as the families of the astronauts waited at the expected landing site at the Kennedy Space Center.

As the communications blackout lengthened, and video footage emerged of a large flying object breaking into pieces, it became clear that the crew had not survived.

According to a crew survival report released by NASA in 2008, the crew likely lived through the initial breakup but fell unconscious quickly as the cabin depressurized. They died as the shuttle broke up around them. Their remains were retrieved, identified through DNA and returned to the families.

NASA, government officials and an army of volunteers spent months after the breakup retrieving pieces and crew remains from the ground. Although reliable reports came in spotting debris in Utah, Nevada and New Mexico, the westernmost part of the debris was found near Littlefield, Texas. Thousands of pieces were retrieved in Texas and Louisiana.

The Columbia Accident Investigation Board was formed to look at the causes of the breakup and to prevent it from happening again. Harold W. Gehman Jr., former commander-in-chief of the U.S. Joint Forces Command, chaired the board. It included participation from a dozen people, including NASA officials and former astronaut Sally Ride, who was also a member of Challenger’s investigation.

The board concluded that a piece of foam from Columbia’s external tank hit the shuttle during launch and caused a fatal breach in Columbia’s wing. This “foam debris” problem was well-known and documented in the years before Columbia’s launch, but over time NASA grew to accept it as part of spaceflight. The board recommended this problem be addressed.

NASA made changes to the external tank as well as put in new safety procedures for shuttle missions. Among them, on every spaceflight, the crew was required to spend several hours scanning the shuttle’s bottom for broken tiles.

The agency still remembers Columbia, as well as past crews lost in the pursuit of spaceflight, on an annual Day of Remembrance every January. Several memorials have been dedicated to the crew as well. For example, seven asteroids were named after the seven crew members of STS-107, and seven Inukshuks — stone cairns that resemble people — were placed at sites at the NASA Haughton-Mars Project on Devon Island, in Canada’s arctic.

Visitors to the Kennedy Space Center can view debris from the Columbia mission (as well as Challenger) at an exhibit called “Forever Remembered,” which opened in 2015. The debris is on display at the visitor’s center and shows window frames from Columbia, as well as personal artifacts from the astronauts. The families of the astronauts collaborated on creating the exhibit.

Meanwhile, some of the experiments from Columbia’s last flight returned useful data. This included a set of roundworms (Caenorhabditis elegans) that survived re-entry and successfully reproduced. Some of the descendants flew in space aboard space shuttle Endeavour in May 2011.