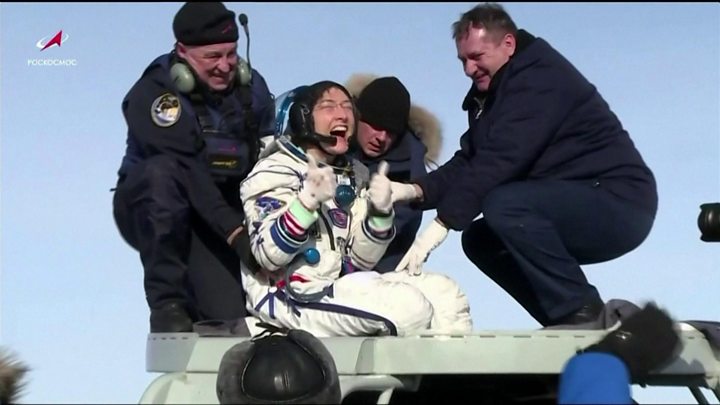 Nasa astronaut Christina Koch has completed the longest-ever single spaceflight by a woman.

The Russian Soyuz spacecraft carrying Koch parachuted down to the grasslands of Kazakhstan at around 09:12 GMT.

“I’m so overwhelmed and happy right now,” she told reporters as she sat outside the capsule, shortly after it touched down in the snow.

Ms Koch surpassed the 289-day record set by fellow American Ms Whitson on 28 December last year. But her return to Earth sets the marker for future space travellers to beat. 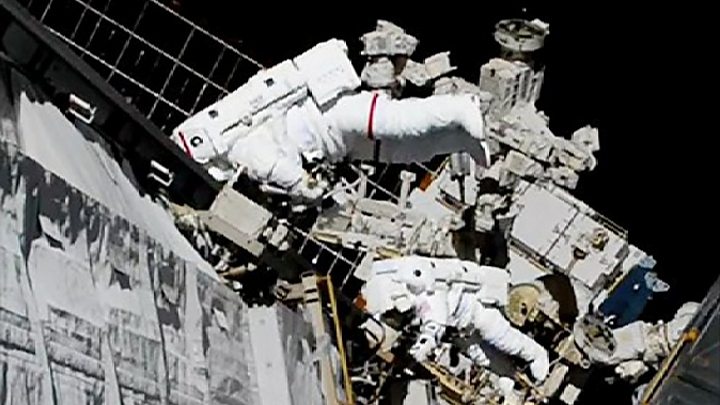 Whitson still holds the record for most time spent in space by a woman, accrued over the course of three spaceflights from 2002-2017.

During her mission, Koch completed 5,248 orbits of the Earth and travelled 223 million km (139 million miles) – the equivalent of 291 round trips to the Moon from Earth.

She returned on the Soyuz with two other crew members – the Italian European Space Agency astronaut Luca Parmitano and Russian cosmonaut Aleksandr Skvortsov. They touched down near Dzhezkazgan in central Kazakhstan.

“For me, it’s all about the honour I feel to follow in the footsteps of my heroes,” Christina Koch told journalists on Tuesday during a live link-up from the ISS. She added that she wanted to inspire the next generation of space explorers.

“For me, it was important to see people that I saw a reflection of myself in, growing up, when I was envisioning what I could do with my life and what my dreams might be. To maybe be that source of inspiration for someone else is just such an honour,” she said.

Ms Koch was involved in another spaceflight milestone during her stay of nearly 11 months on the ISS. On 18 October last year, she undertook the first all-female spacewalk alongside her compatriot Jessica Meir.

Recalling the historic event with Meir, Ms Koch told NBC News: “When we first got the ‘go’ to come out of the airlock, and we ended up coming out, we were holding on to a handrail and we just caught each other’s eyes.

“We knew how special that moment was and I’ll never forget that.”

Koch and Meir followed October’s landmark event with two further spacewalks together, on 15 and 20 January this year.

The first woman spacewalker was the USSR’s Svetlana Savitskaya, who worked outside the Salyut 7 space station for more than three hours with a male cosmonaut, Vladimir Dzhanibekov, on 25 July 1984.

Koch has previously said that her spaceflight would help the US space agency better understand the effects of long-term spaceflight, as Nasa aims to return astronauts to the Moon by 2024.

Ms Koch, along with other active members of the astronaut corps, is a potential candidate for that first return mission.

During her time on the ISS, she experimented on proteins as part of a project that could have implications for cancer treatment.

Koch said one of the things she would miss about her time on the orbiting outpost was the freedom afforded by microgravity. In her interview, she demonstrated by rotating her body 180 degrees, explaining: “It’s really fun to be in a place where you can bounce around between the ceiling and the floor whenever you want.”

However, she added: “I’m definitely looking forward to being on the same planet as everybody else very soon.”

Koch has not only exceeded Whitson’s spaceflight mark but also those of the previous holders of the 5th and 6th longest flights: Yury Romanenko and Sergei Krikalev – both Russians.

The holder of the longest single spaceflight by any person remains the Russian Valeri Polyakov, who spent more than 437 days aboard the Soviet – and later Russian – space station Mir from 8 January 1994 to 22 March 1995.

Koch launched to the ISS on 14 March last year. She was to have remained on the outpost for the standard duration of six months, but her stay was extended in April 2019 because of flight scheduling issues.

Born in Grand Rapids, Michigan, and raised in North Carolina, Ms Koch has degrees in physics and electrical engineering.

She was to have performed the first all-female spacewalk in March, shortly after arriving at the space station. But a problem with the sizing of Nasa colleague Anne McClain’s spacesuit forced the walk to be reassigned to another crew member, Nick Hague.