A Dramatic Error in American Spaceflight

Boeing was set to pass a meaningful milestone in spaceflight, but a glitch cut the mission short. 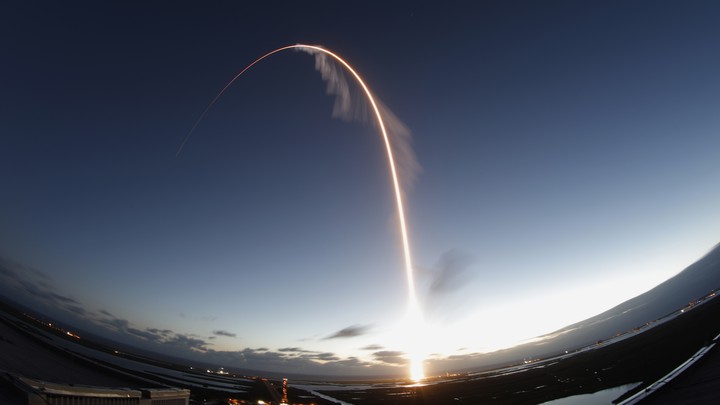 A long-exposure view of the Atlas V rocket, with the Boeing Starliner capsule on top, launching into space this morning Terry Renna / AP

CAPE CANAVERAL, Fla.—It was a picture-perfect launch, just before sunrise on a sandy coastline. The rocket, bright as a candle flame, climbed steadily, leaving a spindly trail of smoke that split the sky in half, with the sharp darkness of night on one side and the first pastel hues of daylight on the other. It carried a capsule, bound for the International Space Station, to the edge of space and let go.

The trouble started after that. The capsule, built for NASA by Boeing, was supposed to ignite its own engines to boost itself higher into orbit, where it would chase after the space station. But the engines didn’t start when they should have. Engineers watched, unable to help from below, as the spacecraft became disoriented.

Before the launch, NASA was optimistic. SpaceX had carried out a similar mission earlier in the year, and that effort was a success from start to finish. But Boeing’s attempt to reach the ISS has failed.

There were no people on board the spaceship, just a mannequin and thousands of pounds of supplies for the crew on the ISS. But this capsule was specifically designed to carry people, and this mission was supposed to test how the craft handled the rigors of spaceflight. If the mission had been successful, the next flight would have carried three astronauts. The astronauts for that inaugural flight already have their assignments and have spent months in training, and they watched this morning’s launch from control centers here. As the rocket took off, “we kind of imagined ourselves as if we were on board,” Michael Fincke, a future Starliner crew member, told reporters at a press conference after the launch.

The capsule, named CST-100 Starliner, is part of a NASA program called Commercial Crew, an effort to launch astronauts to the ISS from the U.S. The agency has not had that capability since the space-shuttle program ended in 2011 under the weight of cost, safety, and political factors. Instead of starting another in-house effort, NASA has hired two companies, Boeing and SpaceX, to design, build, and launch new systems, under the agency’s supervision. In the interim, the agency has paid the Russian agency Roscosmos to ferry astronauts to the ISS on the country’s Soyuz rocket and capsule, together with cosmonauts, from a desert in Kazakhstan.

According to NASA officials, after Starliner separated from the rocket, the capsule missed the moment it needed to ignite its engines for a carefully timed and fully automated process known as an orbital insertion burn. Without that step, the spacecraft couldn’t fire the thrusters to shove itself into the correct orbit. The problem was, of all things, its clock. The system that tracks how much time has passed since launch—and that guides when maneuvers happen—experienced an error. The glitch confused Starliner, making the capsule lose track of time. When engineers realized what was going on, they scrambled to send new commands to the capsule.

But the craft was flying just out of reach of communication, between two satellites. When engineers could finally contact Starliner, they made the spacecraft thrust itself higher, but it was too late. The confused capsule had been burning fuel to maintain its position, and didn’t have enough left to execute that crucial push toward the ISS.

Starliner had no choice now but to return to Earth. The capsule was supposed to circle the planet for about a day until it reached the ISS. It was to dock autonomously with the station and remain there for a week before detaching, streaking through the atmosphere, and parachuting down in New Mexico.

Engineers will now instruct the capsule to fire up its engines a few more times this afternoon to get into the right position for a landing on Sunday.

Jim Chilton, the senior vice president of Boeing Space and Launch, said engineers don’t know why the clock went off track. Nicole Mann, who would have made her first trip to space on the next mission, said that the astronauts “train extensively for this type of contingency, and had we been on board, there could have been actions that we could have taken,” such as manually controlling the spacecraft. Jim Bridenstine, NASA’s administrator, said that if people had been on board, “our crew would have been safe.” He told reporters he had briefed Vice President Mike Pence, the head of the National Space Council, a policy-setting agency, after the launch.

SpaceX completed its own mission to the ISS in March, with a splashdown in the ocean, Apollo-style. The company experienced its own setback a month later, when its crew capsule exploded and was destroyed during an engine test on the ground.

When the rocket took off this morning, NASA presenters on a live-stream, reporting from Mission Control, in Houston, were cheerful. An hour later, they had cut the feed. In the days before the launch, officials’ prime concern had been that it would be too windy this morning, which would have forced them to postpone the liftoff.

So far, the problem appears not to have originated with the Atlas V rocket, a reliable vehicle that has flown dozens of missions, including sending rovers to Mars and orbiters to Jupiter, and top-secret spy missions. The rocket successfully lofted Starliner to a suborbital trajectory. After that, it was entirely up to the capsule to push itself into the right path and catch up to the space station.

A day before the launch, Bridenstine said Boeing could launch a crew “in the first part” of 2020. Starliner can seat seven, and Mann described how future passengers could include not only astronauts, but teachers, journalists, and artists, who could put into lessons, words, or paintings the surreal experience of being in space.

Now the future of the program is uncertain, particularly for Boeing. It’s unclear what additional tests NASA might now require from Boeing before letting astronauts fly, including, perhaps, another attempt at an uncrewed mission. The capsule’s failure will certainly reshuffle schedules and could contribute to further delays for Boeing, already under scrutiny for its sluggishness in a recent report from NASA’s inspector general. The report said the agency has “overpaid” the company by hundreds of millions of dollars for “unnecessary” work on Commercial Crew that “could have been avoided “through simple changes to the flight manifest.” Both NASA and Boeing disputed the assertion.

The spacecraft failure means yet another cycle of bad news for Boeing. The company has a long history with NASA; it was the prime contractor for the ISS and also worked on the space shuttles. But the company is better known for its airplanes, and in recent months the flaws of its 737 Max, which contributed to two deadly crashes, have put Boeing under intense pressure to prove that its aircraft are safe. Before the Starliner launch, a reporter asked Bridenstine about the specter of Boeing’s aviation woes hanging over its spaceflight efforts. “We’re very comfortable with Boeing as a company,” Bridenstine said. “The people that develop spacecraft are not the same people that develop aircraft.”

NASA has contracted private companies to build its hardware for years, but the agency has never relinquished control of crew-transportation systems like this before. SpaceX provided its own capsule, the Crew Dragon, and rocket, the Falcon 9. Boeing manufactured Starliner and, as part of its joint venture with Lockheed Martin, known as the United Launch Alliance, provided the rocket. NASA oversees development and sets the safety requirements that Boeing and SpaceX must meet. But it’s up to the companies to make it work.

In the coming days, NASA and Boeing teams will review data from Starliner’s short-lived mission. And the space agency will continue its negotiations to buy more seats on the Soyuz, Russia’s transportation system, which can cost as much as $86 million. NASA’s last trip on the Soyuz system is scheduled for April. If neither company’s crew capsule is ready by then, NASA will have to buy more slots to ensure that American astronauts can launch to space.