A Houston company with deep NASA experience announced plans Thursday to launch a company-trained commander and three private citizens to the International Space Station as soon as the second half of next year. They would be launched aboard a SpaceX Crew Dragon ferry ship. It would be the first fully commercial orbital space flight by non-government astronauts.

“This history-making flight will represent a watershed moment in the march toward universal and routine access to space,” Mike Suffredini, CEO of Houston-based Axiom Space and a former NASA space station program manager, said in a statement.

“This will be just the first of many missions to ISS to be completely crewed and managed by Axiom Space, a first for a commercial entity.” 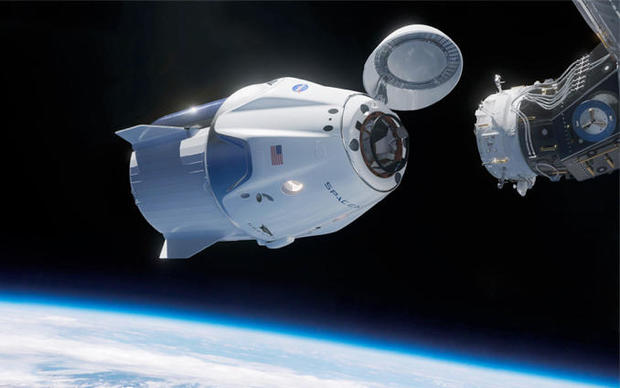 An artist’s impression of a Crew Dragon spacecraft on final approach to the International Space Station. NASA

How much a seat might cost is not yet known and details of Axiom’s contract with SpaceX were not revealed.

On January 27, NASA selected Axiom Space and several partners to provide at least one commercial module to be attached to the space station as part of an on-going push to increase private-sector development in low-Earth orbit. The contract also calls for the eventual development of a stand-alone space station.

SpaceX and Boeing, meanwhile, are pressing ahead with work to ready commercially developed crew capsules, being developed under contract to NASA, for piloted launches later this year.

SpaceX is expected to launch its Crew Dragon spacecraft on an initial piloted test flight in the May-June timeframe with operational flights carrying NASA and partner nation astronauts to and from the space station starting later in the year.

Boeing is working to resolve software issues that cropped up during an unpiloted test fight of its CST-100 Starliner capsule last December before pressing ahead with either another unpiloted test or a crewed test flight.

In a departure from past practice, NASA will not own the Crew Dragon or Starliner capsules when testing is complete. Both companies are free to launch private, non-space station missions as well as flights to the NASA outpost that might include one or more space tourists or privately-funded researchers, assuming safety criteria are met.

Space Adventures, a company that brokered trips to the International Space Station for seven private citizens between 2001 and 2009, announced an agreement with SpaceX last month to launch up to four space tourists or other non professionals aboard the Crew Dragon capsule by mid 2022.

That crew will not visit the space station. Instead, the privately funded space tourists will enjoy views from a record-high orbit before returning to Earth. Space Adventures signed an agreement with Boeing in 2010 to offer unused Starliner seats to private citizens for visits to the space station, although no schedules have been announced.

The Axiom flight announced Thursday would be the first non-government piloted space flight to orbit the Earth.

“Since 2012, SpaceX has been delivering cargo to the International Space Station in partnership with NASA and later this year, we will fly NASA astronauts for the first time,” said SpaceX President Gwynne Shotwell.

“Now, thanks to Axiom and their support from NASA, privately crewed missions will have unprecedented access to the space station, furthering the commercialization of space and helping usher in a new era of human exploration.”