Despite protests from Texas lawmakers, NASA’s Marshall Space Flight Center in Huntsville, Alabama, will manage the agency’s plans to build a lunar landing system that will carry the next man and the first woman to the surface of the moon in 2024 , NASA Administrator Jim Bridenstine announced Friday.

Appropriately enough, the critical program will be managed by Alabama native Lisa Watson-Morgan, who earned her engineering degree from the University of Alabama and is a three-decade NASA veteran.

“The program that will be managed here in northern Alabama is going to land the first woman on the south pole of the moon, and that landing system is being managed by one of NASA’s best engineers,” Bridenstine said. “And she just happens to be a woman. What a great American story for NASA.” 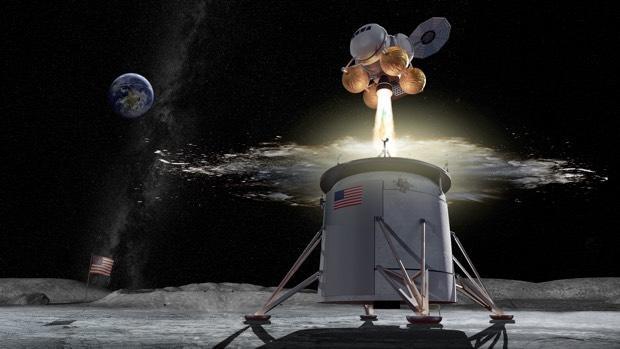 An artist’s impression of a possible lunar lander design, showing an ascent vehicle, carrying an astronaut crew, blasting off from the surface of the moon. NASA

Bridenstine made the announcement standing at the base of a towering test version of the 149-foot-tall liquid hydrogen tank that will be used in the first stage of the huge Space Launch System — SLS — rocket being built by Boeing to carry astronauts back to the moon.

The Artemis moon program is the centerpiece of the Trump administration’s push to return astronauts to the surface of the moon by 2024, four years earlier than NASA originally planned. The Johnson Space Center in Houston is managing all aspects of the program as it relates to astronauts, crew training, life support systems and mission design.

But the lander is a showcase element, and one that Texas lawmakers argue belongs at the Johnson Space Center. Senators Ted Cruz, John Cornyn and Rep. Brian Babin, all Texas Republicans, wrote to Bridenstine Thursday, asking him to “reconsider” his decision until the schedule, projected costs and rational can be explained in more detail.

“While the Marshall Space Flight Center specializes in rocketry and spacecraft propulsion, and is undoubtedly the leader in these areas, it is the Johnson Space Center, which has been, and continues to be, ground zero for human space exploration,” they wrote.

“The integration of development responsibilities into one center — ideally the center with the longest history and deepest institutional knowledge of human space exploration — would be the most cost-efficient, streamlined, and effective approach, and is the approach that NASA should pursue.”

They did not attend the Friday announcement.

But Bridenstine said Johnson will, in fact, be involved in the lander project and that the Texas space center already has a full plate with management of the International Space Station, development of commercial crew spacecraft, cargo delivery missions to the station and the Gateway space station required for Artemis moon landings.

“I understand some of their concerns,” he said. “This is about 363 total jobs, 140 of which will be here in Huntsville, 87 would be led out of the Johnson Space Center.”

With modern technology, including high-speed computer networks, teleconferencing and other tools, having engineers in two locations is not the impediment it was in the early days of the space program, he said.

Morgan tried to reassure critics that Marshall will work closely with other NASA field centers to ensure success.

“We’ve partnered extensively with all the other NASA centers through the years, and we intend to keep doing that,” she said. “That’s how we bring out the best. You let JSC work the crew module, you let Marshall lead in the propulsion areas, you let Glenn (Research Center) lead in the power systems. . That’s what we plan to do.”

In a break with past practice, where NASA developed a “reference” design that industry then implemented, “what we plan to do is collaborate with industry and bring their speed and our experience to try to have the best team that can make this 2024 goal,” Morgan said. “I’m very excited to be part of this, to lead this effort.”

The Artemis program calls for building a small space station called Gateway made up of a solar-electric propulsion module connected to a pressurized habitation module and a docking port. The modules will be launched to the moon by commercial rockets and assembled under remote control using autonomous docking systems. 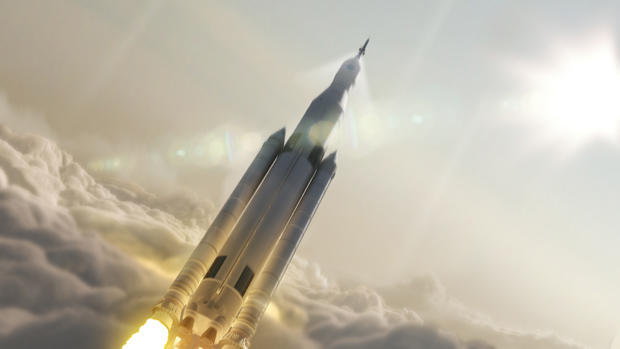 The lunar lander, consisting of three components, also will be launched atop commercial rockets and docked at the Gateway before any astronauts arrive. One component, a sort of carrier craft known as a transfer vehicle, would take the lander from Gateway down to a lower orbit. From there, the lander’s descent module will make a rocket-powered landing on the moon, initially carrying two astronauts.

The astronauts would ride down to the surface in the pressurized cabin of an upper ascent stage. That stage will use the descent module as a launching pad, much like the Apollo astronauts did 50 years ago, to climb back up to the transfer vehicle and then on to Gateway.

While the details remain to be seen, “we’ve got to have a lander,” Bridenstine said. “In most conceptual designs that (lander) requires three elements. . Two of those elements are highly focused on propulsion. And I would argue that when it comes to propulsion, there is no place in the world more experienced or better than the Marshall Space Flight Center.”

While development of Gateway and the lunar lander are underway, NASA will be pressing ahead with development and tests of the gargantuan Boeing-built SLS rocket needed to boost astronauts out of Earth orbit and on to the moon aboard Lockheed Martin-built Orion capsules.

An initial unpiloted test flight of the SLS-Orion space vehicle is planned for 2021, followed by a piloted flight around the moon in the 2022-23 timeframe. If all goes well, the third flight of the SLS will carry astronauts to the Gateway for an initial landing near the moon’s south pole in 2024.

NASA originally planned to put astronauts back on the moon in 2028. But earlier this year, the Trump administration directed the agency to accelerate those plans, approving $1.6 billion in supplemental funding for NASA’s fiscal 2020 budget to kick-start development.

Since then, NASA has awarded a contract to Maxar for Gateway’s propulsion module and another sole-source contract to Northrop Grumman for the habitation section. A variety of smaller fast-track contracts for science payloads and technology development have also been awarded.

But the schedule includes almost no margin for technical setbacks or delays. Complicating the outlook, Bridenstine has said NASA will need an additional $20 billion to $30 billion over the next five years to meet the Trump administration’s 2024 lunar landing deadline.

“The funding is significant,” said Rep. Mo Brooks, R-Ala. “We’re talking about, in the first year, roughly $1.6 billion to make sure we’re on track to return to the moon by 2024. Over that five-year period, we’re looking at somewhere in the neighborhood of $25 to 30 billion.

“And let me emphasize that has to be over and above what we’re already spending on the science NASA does,” he added. “That is a significant commitment, and I hope that Congress will be in a position to recognize the value, the advancements we’re undoubtedly going to have.”