Apollo 11: First Men on the Moon 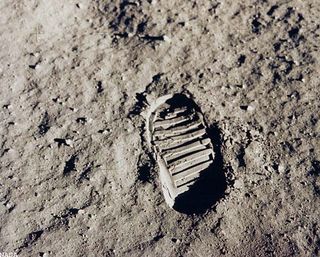 The historic launch of the Apollo 11 mission carried three astronauts toward the moon. Two of them would set foot on the lunar surface for the first time in human history as millions of people around the world followed their steps on television.

The crew of Apollo 11 were all experienced astronauts who had been to space before.

Cmdr. Neil Armstrong had piloted Gemini 8; that mission was the first time two vehicles docked in space. Born Aug. 5, 1930, in Ohio, Armstrong was 38 when he became the first civilian to command two American space missions.

Col. Edwin Eugene “Buzz” Aldrin, 39, was the first astronaut with a doctorate to fly in space. Born Jan. 20, 1930, in New Jersey, Aldrin piloted Gemini 12 in November 1966, and performed a 140-minute walk in space to demonstrate that an astronaut could work efficiently outside the vehicle. For Apollo 11, he served as the lunar module pilot.

From Earth to the moon

Mission planners at NASA studied the lunar surface for two years, searching for the best place to make the historic landing. They examined the best high-resolution photographs available at the time, from the Lunar Orbiter and Surveyor programs, and considered the number of craters and boulders, cliffs and hills at each prospective landing site, and how easy it would be for the astronauts to land given their fuel and time requirements. This helped the planners narrow down the initial 30 site candidates to three.

Apollo 11 launched from Kennedy Space Center in Florida at 9:32 a.m. Eastern time on July 16, 1969. While in flight, the crew made two televised broadcasts from the interior of the ship, and a third transmission as they drew closer to the moon, revealing the lunar surface and the intended approach path. On July 20, Armstrong and Aldrin entered the lunar module, nicknamed the “Eagle” and separated from the Command Service Module — the “Columbia” — and headed toward the lunar surface.

The lunar module touched down on the moon’s Sea of Tranquility, a large basaltic region, at 4:17 p.m. Eastern time. Armstrong notified Houston with the historic words, “Houston, Tranquility Base here. The Eagle has landed.”

For the first 2 hours on the moon, Armstrong and Aldrin remained in the module and checked all of the systems, configured the craft for its stay on the moon and had a bite to eat. In consultation with NASA, they decided to skip their scheduled 4-hour rest and opted to go outside and explore the moon’s surface instead.

A video camera installed in a panel inside the Eagle provided live coverage as Armstrong descended a ladder at 11:56 p.m. on July 20, 1969, and uttered the words, “That’s one small step for man, one giant leap for mankind.”

Aldrin followed 20 minutes later, with Armstrong taking images of his descent. Armstrong had the responsibility to document the landing, so most of the images taken from the Apollo 11 mission were of Aldrin. [NASA’s Historic Apollo 11 Moon Landing in Pictures]

Apollo 11 astronaut Buzz Aldrin poses with the American flag on the surface of the moon in July 1969. (Image credit: NASA)

While on the surface, the astronauts set up several experiments, collected samples of lunar soil and rock to bring home, erected a United States flag and took core samples from the crust. They spoke with U.S. President Richard Nixon, whose voice was transmitted from the White House, and placed a plaque on the ground that stated:

HERE MEN FROM THE PLANET EARTH
FIRST SET FOOT UPON THE MOON
JULY 1969, A.D.
WE CAME IN PEACE FOR ALL MANKIND

The astronauts also laid down memorial medallions with the names of several astronauts and cosmonauts who had perished in flight and in training (including the Apollo 11 crew and the first person in space, Yuri Gagarin). They also left a 1.5-inch silicon disk with goodwill messages from 73 countries, and the names of congressional and NASA leaders.

Armstrong spent a little over 2.5 hours outside the Eagle. The astronauts traveled a total distance of about 3,300 feet (1 kilometer) as they walked around, traveling as far as 200 feet (60 meters) from the module to visit a large crater. They collected 47.51 lbs. (21.55 kilograms) of samples from the moon, and reported that mobility on the moon was easier than anticipated.

Neil Armstrong on the moon during the Apollo 11 mission in 1969. (Image credit: NASA)

At 1:54 p.m., having spent a total of 21.5 hours on the moon, the lunar module blasted back to where Collins waited in the Columbia. The two vehicles docked, and the crew and samples transferred to the Columbia before the Eagle was jettisoned into space. The astronauts then headed back home.

The team splashed down in the Pacific Ocean at 12:50 p.m. Eastern time on July 24, only a few miles from the recovery ship, the U.S.S. Hornet. After donning biological isolation garments (on the off-chance that the astronauts carried back any harmful microbes from the moon), the crew left the Columbia and climbed into a rubber boat, where they were rubbed down with iodine in an effort to minimize potential contamination. They then traveled by helicopter to a Mobile Quarantine Facility aboard the ship before being taken to Houston where they remained in quarantine until Aug. 10. The men had completed the national goal set by President John F. Kennedy in 1961, to perform a crewed lunar landing and return to Earth.

The Apollo 11 mission remains widely celebrated as it approaches its 50th anniversary in 2019. The U.S. Mint prepared special coins for the celebration.

The Smithsonian Institution is remodeling its moon gallery at the National Air and Space Museum (NASM) in Washington, D.C., for a 2021 opening. Meanwhile, the newly restored Columbia spacecraft is on tour with stops in Houston, St. Louis, Pittsburgh and Seattle. It’s the first time Columbia has been outside the Smithsonian since 1971.

In July 2009, the National Air and Space Museum hosted a gala for Apollo 11’s 40th anniversary, which included speeches by the three crewmembers of Apollo 11. At an afternoon session in which Collins, Aldrin and Apollo 12 astronaut Alan Bean offered to sign autographs, the line of space enthusiasts and admirers quickly stretched across the length of the museum’s floor. Collins and Aldrin still regularly make appearances for Apollo-related activities, despite both being in their late 80s.

Armstrong, 82, died on Aug. 25, 2012, from complications following cardiovascular procedures. A public memorial service was held Sept. 13 at Washington National Cathedral, and Armstrong was buried at sea the next day. In 2015, NASA announced that Armstrong’s widow,Carol Armstrong, had found a bag full of lunar artifacts among Armstrong’s belongings, which she donated to the museum.

Apollo 11 astronauts, still in their quarantine van, are greeted by their wives upon arrival at Ellington Air Force Base on July 27, 1969. (Image credit: NASA)

NASA’s Lunar Reconnaissance Orbiter imaged the Apollo 11 landing site from space in 2012 and spotted the astronauts’ tracks, some of the experiments, a discarded camera and the descent stage of the Eagle lunar module. A 3D view of the site based on the images from the orbiter was generated in 2014.

A lunar sample bag from Apollo 11 generated a legal dispute after it was accidentally sold at a Texas auction in 2015, held on behalf of the U.S. Marshals Service. An Illinois woman, Nancy Carlson, bought the bag for $995. The U.S. government petitioned the courts to return the lunar sample bag to NASA and undo the sale, but Carlson was ruled the legal owner in 2016. Originally, the bag was confiscated from Max Ary, a former curator convicted in 2006 of stealing and selling space artifacts that belonged to the Cosmosphere space museum in Hutchinson, Kansas.

In anticipation of Apollo 11’s 50th anniversary in July 2019, Universal Pictures released “First Man,” a movie based on Armstrong’s training journey to become the first man on the moon. And a new documentary about Apollo 11, directed by Todd Douglas Miller, premiered in March 2019. Additionally, the National Air and Space Museum in Washington, D.C., has a number of special events and exhibits planned to celebrate Apollo 11’s anniversary.