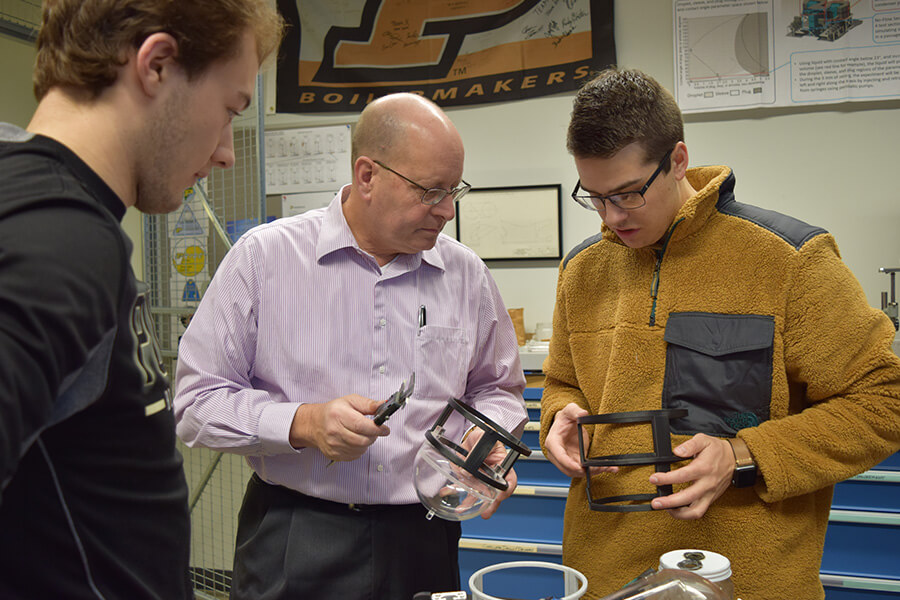 Michelle Lucas and Chet Kumar came to Steven Collicott with an idea in Fall 1996.

The students had learned NASA was starting a new program, Reduced Gravity Student Flight Opportunities, offering a chance for college students to design experiments for microgravity and fly in the plane with them. They wanted Collicott to be their advisor on the project.

Collicott wasn’t a hard sell: As a professor at Purdue, his research was in the low-gravity area, and he knew connecting with NASA would be a great networking opportunity. But it was only a side project, not a course, so that meant Collicott’s involvement, as well as all the work done by the four-member student team, was extra circular.

Then, Collicott figured it’d be a one-time thing.

But after the experiment was designed — it was “The Study of Fluid Sloshing in a Low-g Environment” — and after the students floated in low gravity aboard NASA’s KC-135A aircraft and completed their experiment, they all knew it wouldn’t be the last time.

“I saw that year that it was tremendous hands-on, team-based, real-world, no-answers-in-the-back-of-the-book, have-to-deliver type of engineering education. It was worth doing,” Collicott says. “The next year, NASA ran it again. So we had another team, and we just kept going at it.”

After a few years, the students got course credit. After a few more, Collicott figured it was time to propose a class. It was before the 2002-03 academic year when he walked into a faculty meeting, anticipating objections and prepared to counter any argument, to make the pitch.

“Everybody said ‘yes,’ and I didn’t know what to do,” says Collicott, laughing. 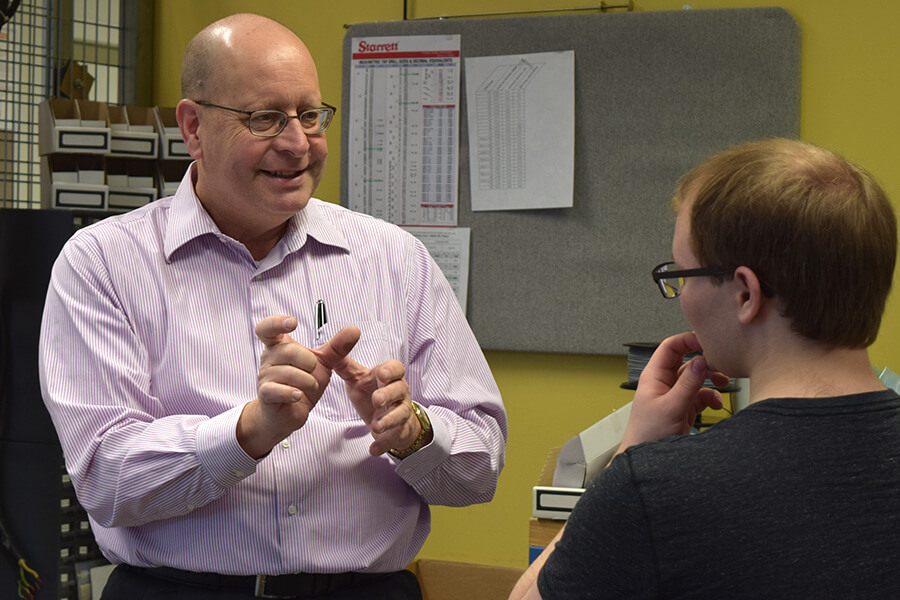 It’s continued to grow, challenging students toward innovation by formulating ideas and building and testing them, and offering new opportunities at seemingly every turn. The course is offered every semester now, fall, spring, and summer.

This fall was Year No. 23 for Collicott. But he hasn’t forgotten the beginning.

Learning forward in the chair in his office in Neil Armstrong Hall of Engineering, Collicott points to a framed photo on one wall. It’s him and those four students from 1996 — Lucas (AAE), Kumar (ME), Scott Schoenherr (AAE), and Jason Toschlog (physics) — posing with their experiment on the plane before the flights. He has kept in contact with all of them. But that’s not surprising for a professor known for infectious enthusiasm for his work, a passion for teaching, and desire to challenge students.

Recently, Collicott was recognized for all of that — his approach, his dedication, his expertise, his willingness to help students plot their course and achieve their dreams. He was chosen as the Patti Grace Smith STEM Award Winner by the Commercial Spaceflight Federation (CSF) in its inaugural Commercial Space Leadership Awards for his “leadership as an educator committed to scientific excellence and the expansion of knowledge for the next generation of commercial space pioneers,” a press release said.

“Through his dedication in expanding the flight opportunities program, he has continued to provide his students with amazing opportunities to become involved in the burgeoning commercial space industry,” says Alexandra Johnson, space policy analyst for CSF. “We are honored to present him with this award and are looking forward to continuing to see how he has inspired his students through his engagement with the microgravity community.”

Collicott is the chair of CSF’s Suborbital Applications Research Group, which has made significant headway in expanding funding for integral programs, the release said, and he has advocated for the importance of suborbital research. 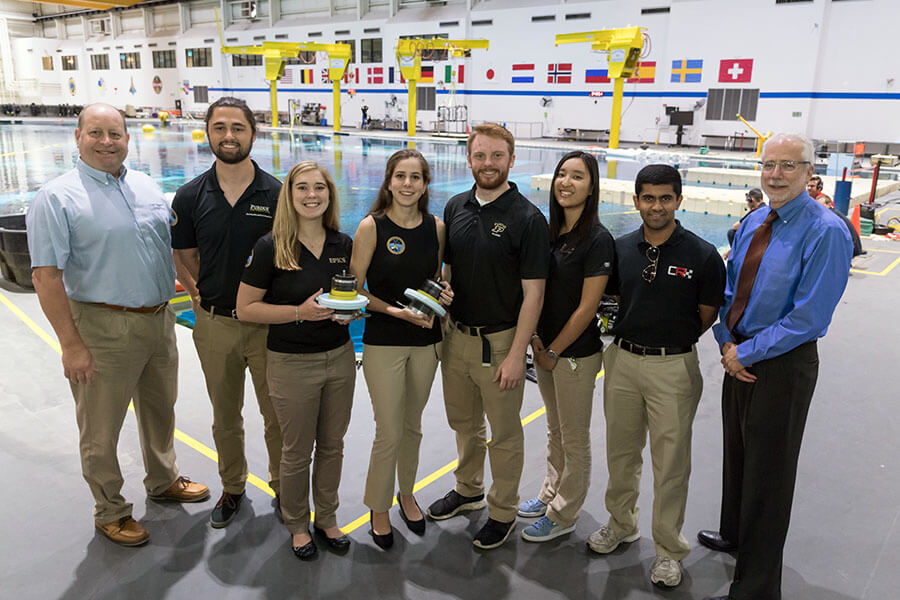 “It’s pretty cool that it’s coming from industry, people who hire our graduates,” Collicott says of the honor. “I’ve long said we have a lot of exciting opportunities in aero-astro at Purdue, and (AAE418) would be one of them.”

The course may have started because of NASA’s program — affectionately dubbed the “vomit comet” because of its tendency to produce such results in the humans on board the flights, which climb and descend to produce periods of weightlessness — but that’s not why it has continued.

The course has developed into a broader scope that gives students opportunities to make connections with the aerospace industry and the budding commercial suborbital industry.

In 2009, a group from the class had its first student payload on a suborbital rocket, and “we’ve just been doing a bunch ever since,” Collicott says. That includes one in the works: A team built and delivered a payload to verify a pressurized payload chamber stays pressurized during flight tests for EXOS Aerospace. Three others are being built for future launches of Blue Origin’s New Shepard.

For the past five years, teams from the class also have been selected by NASA for its Micro-g Neutral Buoyancy Experiment Design Team (NExT). The 2019 group will test a tool they designed and built at Purdue later this spring in Houston.

The class also has spawned work that trickled into grade schools and high schools. In 2015, Collicott used his 418 class as a vehicle to help second graders at Cumberland Elementary School answer one question: Would a firefly light up in space? A group of students from AAE418 started working with the second graders to create an experiment mixing the relevant chemicals during the weightlessness of a spaceflight and observe the results. In 2017, “ZGGE,” the Zero-Gravity Glow Experiment, was a payload on a Blue Origin flight.

After officials from Blue Origin complimented the box used for that experiment, Collicott looked into possible production of more opportunities for K-12 students. The answer was producing the “Purdue School Launchbox,” an 8-inch-by-4-inch aluminum box that can work within the 1-pound payload limit for suborbital rockets.

“The class really has been a holding company for whatever different ideas in this topic that have come along that we’ve been able to involve students,” Collicott says. “It certainly started out as one specific thing, a very good thing, but it’s a basket for other opportunities.” 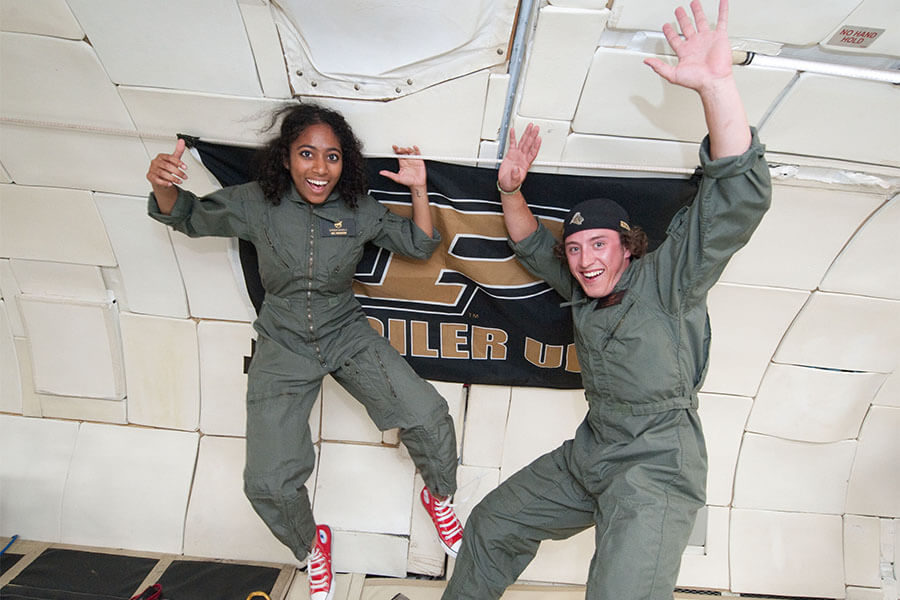 The wide variety of experiences is shared broadly, too.

The lure of zero gravity caught Alycia McEachen’s attention while she was in high school, thanks to Collicott and his class.

As he’s done for 23 years, Collicott had dispersed a group of students from AAE418 to a local school — in this case Jefferson High School in Lafayette, Ind. — as outreach for the class and AAE. McEachen heard the group speak as part of a “Project Lead The Way” course called “Aerospace Engineering Technology.” Over the course, McEachen developed a curiosity and interest in planes and rockets that turned into a passion. She points to two specific days in the course that led to her decision to pursue not only aerospace engineering but Purdue AAE: The information shared from that AAE418 team was one of them.

“The idea of being able to work on a project that would be tested in such an environment was immediately fascinating,” she says. “Furthermore, the possibility of being able to experience zero gravity in the process was something I thought I would only ever see in movies.”

McEachen, now a senior in AAE, currently is taking her second semester of AAE418. She’s already worked on a project that launched in the fall, and she’s working on a conformal fuel tank project now.

“I really enjoy the class,” she says. “It is nice to be working on something real that has value rather than hypothetical situations that end when I complete an assignment. It reminds me that my coursework has a purpose.”

That’s been a lesson learned by each of Collicott’s students who were involved in Zero-Gravity Flight Experiments, whether as an official course or during the “extra circular” period.

And they’ve seen the project-based approach pay off after college, too.

Bob Manning, a fluid analyst at Keystone Engineering Company, was team leader for the course’s NASA Flight Opportunities group in 2001, when he was only a freshman at Purdue. He eventually realized how rare and special AAE418 was.

Manning (BSAAE ’04, MSAAE ’06, PHDAAE ’17) says he didn’t know anything about fluid dynamics before the class but credits it for giving him an appreciation of the field “that I probably would have never gotten exposed to and very much enjoyed.”

Now in his position at Keystone Engineering, Manning says the fluid mechanics that AAE418 experiments test provide a basis to design fluid management devices for spacecraft.

“It was interesting because you did real research,” Manning says. “You’re always taught theory that was developed 20, 50, 100 years ago and not what’s being developed today. That’s unique for undergraduates.”

When Collicott receives the award in D.C., his thoughts likely will drift to Manning, McEachen, Kumar and Lucas, and all the other students whose lives he’s touched — and who have made an impact on his. Really, it’s the students who have been the motivation for the expansion of the course, for one, and also for his willingness to continue to make connections within the aerospace community.

“People ask, ‘How much time do you spend teaching and researching?’ I don’t know how to separate them,” Collicott says. “Lot of the things in the lab become homework problems and lecture topics. There are times I’ve been standing lecturing in a traditional class and at the board teaching the first semester most basic aerodynamics and suddenly realize I just figured out something for research. The way our students seem to get so many internships these days, the blurring between class and industry is increasing, which is good for them. They’re getting a lot of opportunities.”