An Alarming Discovery in an Astronaut’s Bloodstream

A study has turned up a side effect of human spaceflight that no one had observed before. 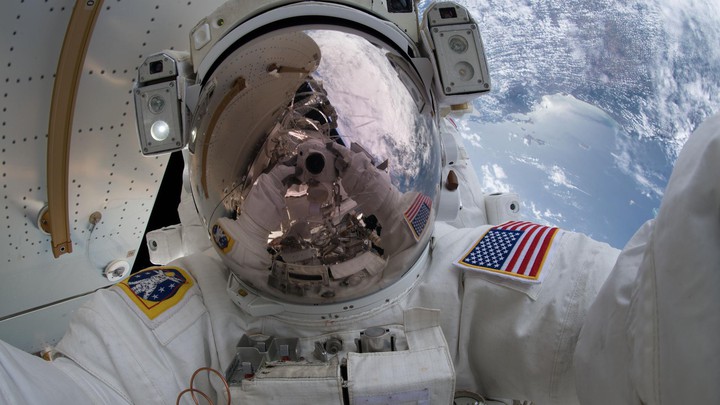 Astronauts are more than cosmic travelers. They’re also research subjects in the careful study of what exactly outer space does to the human body. On the ground, researchers measure vitals, draw blood, swab cheeks, and more. In orbit around the Earth, the astronauts do the work themselves.

That’s how they found the blood clot.

An astronaut was carrying out an ultrasound on their own body as part of a new study, guided in real time by a specialist on the ground. A similar test before the astronaut launched to space had come back normal. But now the scan showed a clump of blood.

“We were not expecting this,” says Karina Marshall-Goebel, a senior scientist at NASA and the author of the study, published earlier this month. “This has never been reported before.”

NASA doctors took over. The astronaut wasn’t showing any symptoms stemming from the clot, but was still pulled out of the study and treated with blood-thinning drugs for the rest of their time in orbit. The researchers had discovered a new risk in human spaceflight.

The study was designed to study different, well-known side effects of space travel. A decade ago, scientists started noticing that astronauts who spent months on the International Space Station came home with swollen optic nerves, slightly flattened eyeballs, and changes in vision. NASA started putting glasses on board the station for astronauts who found that their eyesight had worsened. Scientists have suspected that the cause involves an accumulation of the body’s fluids such as blood and water. Free from the steady tug of gravity, the fluids float toward the head and can increase pressure inside the skull.

To investigate this theory, Marshall-Goebel and her team targeted a jugular vein on the left side of the neck, which delivers blood from the head to the heart. The study’s astronaut subjects included nine men and two women. (The study did not disclose their identities.) Before the astronauts launched, researchers measured blood flow in their jugular vein in seated, supine, and tilted positions. The readings looked normal. The researchers had the astronauts repeat the ultrasounds during their missions on the ISS.

Scans showed that blood flow in the vein stalled in five of the 11 astronauts. “Sometimes it was sloshing back and forth a bit, but there was no net-forward movement,” Marshall-Goebel says. Seeing stagnant blood flow in this kind of vein is rare, she says; the condition usually occurs in the legs, such as when people sit still for hours on a plane. The finding was concerning. Stagnant blood, whether it’s in the neck or in the legs, can clot. Blood clots can dissolve on their own or with the help of anticoagulants, but the blockages can also cause serious problems, such as lung damage.

In two astronauts, blood in the vessel actually started moving in the opposite direction, from the heart toward the head, which is “extremely abnormal” for this vein, according to Marshall-Goebel. The researchers think the blood switched directions because of a blockage somewhere downstream. The phenomenon has been reported in non-astronauts with tumors or masses that forced blood to find a different path to the heart.

“It’s almost like a detour, when you’re in your car and you sometimes have to go down the wrong street to get where you need to go,” Marshall-Goebel says. Perhaps something similar was happening in the astronauts; like their bodily fluids, the organs in their torsos had shifted upward and blocked off certain veins. Marshall-Goebel says she was rather impressed by this—the body, plunged into an environment unlike anything it had experienced before, found a small way to adapt.

The researchers had astronauts spend some time inside a special suit that Russian cosmonauts use to prepare for their return to Earth. The suit, which looks like a pair of puffy pants, uses suction to simulate gravity and draw some fluids back toward the lower body. Blood flow improved in some astronauts, but not in others.

The researchers attribute the effects they observed to the space environment. All the astronauts were considered to be in good health before they launched. And when they came home, the conditions vanished in nearly all of them. When the researchers analyzed the data, they found that a second astronaut may have developed a blood clot no one had seen while they were in orbit. But no one experienced any health troubles. “None of the crew members actually had any negative clinical outcomes,” Marshall-Goebel says.

Researchers who study astronaut health and were not involved in this work say that the findings are compelling and require further investigation. “We definitely have enough evidence to consider this to be an important risk to human health in spaceflight that warrants additional research,” says Virginia Wotring, an associate professor of space medicine at the International Space University, in France. “I think we need to understand this before we embark on long-duration missions where the astronaut would be so far away that we wouldn’t be able to help them in the case of a medical emergency.”

Wotring says she’d like to see a study that probes differences in risk for male and female astronauts. The researchers warn that their findings may have implications for women who use birth-control pills, which increase the risk of developing blood clots, to suppress their period during their missions. (Menstruating in space, contrary to suggestions in early spaceflight history, is not dangerous, but some women avoid it out of convenience.) “There are an awful lot of effects of space on the human body that we’re not aware of yet,” Wotring says.

The researchers say that shifting blood flow in an astronaut about 260 miles above Earth isn’t as dire as it sounds. It’s possible that many other spacefarers have experienced the same conditions, without anyone noticing. “Time is needed to develop a clot when flow is stagnant, but you don’t need several months for this to occur,” says Michael Stenger, the head of the Cardiovascular and Vision Laboratory at NASA’s Johnson Space Center and one of the study’s co-authors. “It can happen in hours and days.” These days, astronauts usually spend six months on the ISS, and some stay for nearly a year.

But the clot was an uncomfortable surprise. “I think it was probably scary for everybody,” Marshall-Goebel says. “But I think the fact that we found this now is really, really good news, because it’s something that—if you know this is a risk factor of spaceflight, it’s something that you can monitor and prevent.” If something goes wrong now, astronauts can be back on the ground in a matter of hours. On the moon, they’d be days away, and on Mars, months.

A NASA spokesperson says the agency is now drawing up plans for a formal ultrasound program to monitor all of its astronauts while they’re in orbit. It has also made sure that the ISS “is equipped with appropriate treatments in the medical kit available to crew members.”

After nearly 60 years of human space exploration, scientists know quite a bit about how the body behaves in space. Before the first men went up, some worried that weightlessness would wreck simple functions such as swallowing. Research has shown that the human body doesn’t love spending months being weightless, but it manages pretty well.

But unknowns remain, and the risks may become more pressing if commercial companies such as SpaceX follow through on their promise to send paying customers into space. Christopher Mason, a geneticist at Weill Cornell Medicine who has studied spaceflight-related changes in the twin astronauts Scott and Mark Kelly, wonders how members of the general population might fare. “We take these super-fit astronauts up and they can adapt and be okay, but what will it look like when we send two random people?” Mason says. “Hopefully they’ll be fine, but we don’t have really any data on it, so it’s hard to tell.”