Before it was decommissioned, we got to sit in the pilot’s seat and ask questions. 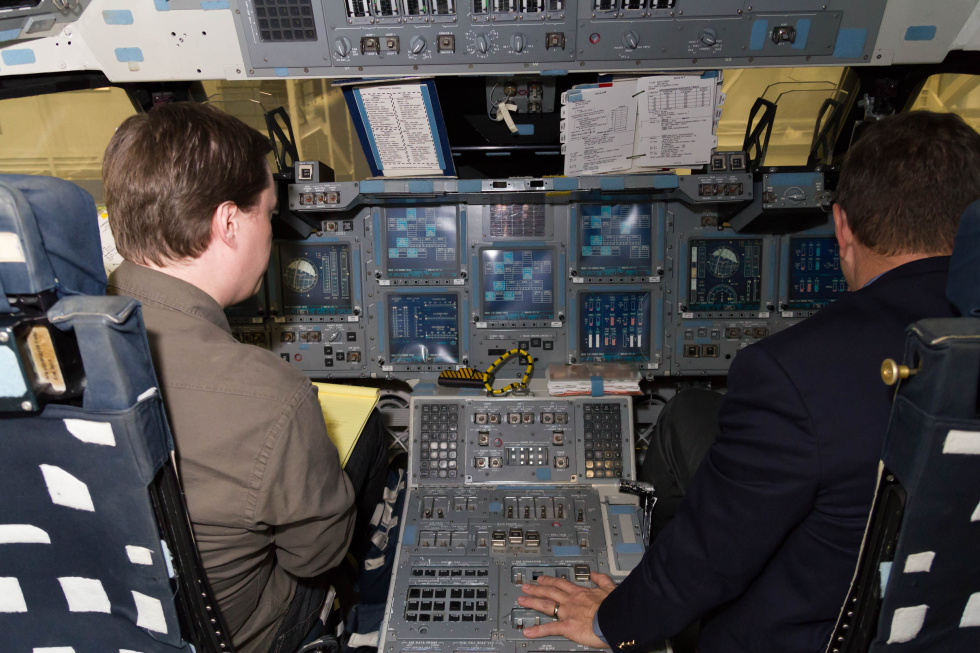 HOUSTON, TX—Talk to an astronaut about their training to fly in space and it won’t be long before they mention “Building 9.” That’s the common way of referring to the particular structure at Houston’s Johnson Space Center (JSC) that houses the SVMF, or the “Space Vehicle Mock-up Facility,” which is without a doubt one of the coolest places on Earth for a space geek to visit.

It’s been high on my list of places to see for many years, and Ars was granted access shortly before the last major pieces of space shuttle training hardware were removed. With former astronaut Mike Bloomfield as our guide, we crawled and climbed all through the Crew Compartment Trainer II, a life-sized mock-up of the space shuttle’s forward compartment. We took a lot of pictures.

The facility is located inside an enormous warehouse on the JSC campus. The T-shaped structure’s main feature is the SVMF high-bay itself, which is oriented northwest-southeast and capped at the southeast end by an enormous pair of sliding doors (used to install or remove mock-ups). Permanently mounted to ceiling rails inside the high-bay is a pair of enormous overhead cranes for moving equipment around.

The configuration of mock-ups in the SVMF changes with some regularity for various training tasks. The mock-ups housed in the SVMF are usually “high fidelity,” meaning that they closely resemble the actual vehicles and components that will be launched into space. The Crew Compartment Trainer II, which we toured, was such a mock-up. It featured the exact interior layout of an actual space shuttle, but the controls were inert and non-functional (with a few exceptions like the switches for cabin lighting).

At the time of our tour, the SVMF featured a high-fidelity mock-up of the International Space Station and a Soyuz. Several sections of the building were dedicated to specific training tasks—there was a life-sized SSRMS mock-up (the Space Shuttle Remote Manipulator System—the shuttle’s “arm”), for example, along with a number of other training setups.

Mike Bloomfield and I entered the CCT2 through the side hatch and stood on the “mid-deck,” the area below the shuttle’s cockpit where the crew typically ate and slept. This is where as many as three of the shuttle’s crew had to ride out launch and re-entry (without any windows!).

The mid-deck was small. Three adult humans—Bloomfield, my photographer Steve, and I—took up most the available space just standing around; getting positioned so that Steve could take photos of us was often an exercise in shifting and elbowing. Bloomfield explained that the mid-deck only becomes roomy in the microgravity environment of low earth orbit, where suddenly all the available nooks and crannies become accessible.

The forward wall of the mid-deck is taken up by supply lockers that are used to hold things the crew needs for the mission, including snacks. Bloomfield smiled as he pointed out the drawer at the very top where the snacks were kept (typical items you’d find anywhere, like potato chips and candy), saying that the snack drawer was often the first thing on any given mission to run dry.

To the left of the lockers was the food prep station, which contained a small oven and potable water dispenser (for both drinking water and for rehydrating meals), and then to the left of that, along the aft wall, was the toilet compartment.

Every available surface, from floor to ceiling, was covered in strips of velcro—something that not every space movie gets right. Small items tend to float away in microgravity, so astronauts request that velcro be affixed to just about every blank surface so they can fix things like books, pens, and eating utensils in place.

(In spite of how it burned in the Apollo 1 fire, velcro isn’t a significant fire hazard. The space shuttle kept its cabin pressurized to an Earth-normal 14.7 psia with a mix of about 80 percent nitrogen and 20 percent oxygen, and under those conditions velcro is not flammable. It only burned on the Apollo 1 fire because the Apollo 1 command module was at the time filled with pure oxygen at 16.7 psia—conditions that can turn even flame-retardant materials into potential ignition sources.)