6 Private Companies That Could Launch Humans Into Space 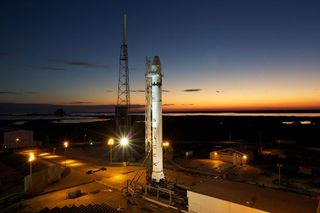 The era of private spaceflight is breaking new ground with the first test launch of the new Falcon 9 rocket by the company Space Exploration Technologies (SpaceX), which hopes to use the booster to fly its Dragon spaceship on space station trips. And with NASA’s space shuttles retiring this year, SpaceX is not alone in the bid to launch cargo and astronauts into space.

NASA has tapped SpaceX and another company ? Virginia’s Orbital Sciences ? to build unmanned cargo ships to stock up the International Space Station after its final two shuttle missions fly later this year. SpaceX’s Falcon 9 rocket is poised to make its first test flight this week.

After that, the agency plans to modify the Lockheed Martin-designed Orion capsule as a space station lifeboat. Aerospace juggernaut Boeing is also hoping to compete for commercial crew capabilities.

But while giants like Lockheed Martin and Boeing duke it out, some smaller ? but equally ambitious ? companies have joined SpaceX in the race to build the next spacecraft to put Americans in space. Here’s a look at six companies vying for the future of human spaceflight:

Number of Passengers: 7 maximum, or fewer with a mixture of cargo and crew

SpaceX’s Falcon 9 rockets and Dragon spacecraft are initially expected to be unmanned vehicles to serve NASA’s cargo needs for the International Space Station. Musk has said Dragon could be ready to launch astronauts within three years of receiving a contract from NASA to do so. The company currently has a $1.6 billion contract to provide 12 unmanned cargo deliveries to the station through 2016.

The Falcon 9 rocket is about 180 feet (57 meters) tall and is a two-stage booster. The Dragon capsule is a solar-powered spacecraft designed to be grappled by the space station’s robotic arm and installed on a docking port.

Number of Passengers: So far, the Cygnus is purely unmanned

A veteran hand when it comes to rocket launches, Orbital Sciences has a $1.9 billion contract with NASA to provide eight cargo missions for the International Space Station using its unmanned Cygnus spacecraft and the new Taurus 2 rocket. Orbital is planning the launches in 2011 from Wallops Island in Virginia.

Orbital has not announced plans on whether it may try to convert the Cygnus vehicle for crewed missions. The Taurus 2 rocket stands about 131 feet (40 meters) tall and is a two-stage booster to be topped by the Cygnus spacecraft.

Number of Passengers: at least 3 astronauts

Blue Origin has remained extremely secretive about its plans, but has tested a prototype of its New Shepard spacecraft at the company’s proving grounds in Texas. New Shepard is expected to be a vertical launch and landing vehicle capable of reaching an altitude of about 75 miles (120 km) .

Number of Passengers: Sundancer to support crews of 3, BA-330 to support 6-person crews

Bigelow Aerospace has been paving new ground in inflatable spacecraft and already launched two mini-space station prototypes, called Genesis 1 and Genesis 2. The company’s larger Sundancer and BA-330 vehicles are expected to serve as space stations, not capsules. Additionally, company founder Robert Bigelow has set his sights on developing a private moon base using the inflatable technology.

Since Bigelow Aerospace does not have rockets or spacecraft to reach its space stations, the company has been working closely with Boeing on potential crew capsules.

Boeing received $18 million from NASA this year to support development of its own 7-person spacecraft.

California-based SpaceDev is a wholly owned subsidiary of Sierra Nevada Corp. (which acquired it in 2008) and has been developing the reusable Dream Chaser space plane to launch crew and cargo into space at an Atlas 5 rocket.

In February, Sierra Nevada won $20 million in NASA funds to continue the Dream Chaser’s development. The spacecraft’s design is based on the HL-20 lifting body tested by NASA and aims to launch on a rocket and land on a conventional runway, for quick turnaround and reuse.

The only air-launched vehicle in the group, Virgin Galactic’s SpaceShipTwo vehicle is still just a suborbital vehicle designed for space tourism jaunts into space. The company envisions launching paying passengers on suborbital thrill rides for about $200,000 per seat. However, the spacecraft’s mother ship ? the huge WhiteKnightTwo aircraft ? could be modified to launch small rockets or satellites for NASA or other users.

SpaceShipTwo is designed by veteran aerospace engineer Burt Rutan and the company he founded, Scaled Composites of Mojave, Calif. It is a larger version of SpaceShipOne, which successfully flew on suborbital flights in 2004.