The year 2018 logged a myriad of milestones in spaceflight. While space launches carried out throughout the year surpassed 100 — the first time since 1990 – the year also saw intense activities in the areas of deep space explorations including Moon, Mars and the Sun, human spaceflight, and rocket innovation. And then there was the Starman in his brand new Tesla car flying towards Mars. Let’s take a look at some of the major events in spaceflight that marked 2018.

A total of 113 launches have been carried on till December 26 with the 2018 tally expected to hit 116 with two more launches scheduled for the year. A China Long March 2D rocket will launch the Hongyan-1 mission on December 29 while a Delta 4-Heavy will deploy the massive payload for the US National Reconnaissance Office in a mission known simply as NROL-71 from Vandenberg’s Space Launch Complex 6 on December 30. This is the first time the number exceeded 100 since 1990.

China in 2018 leads the world with 37 orbital launches as of Tuesday, followed by the US with 34 and Russia with 18. The year will mark the first year that China surpasses the US for space rockets in a year, a landmark for China’s space exploration efforts, Sputnik reported, a fact also validated by Elon Musk when he tweeted “Amazing space progress by China. This year they did more orbital launches than the US for the first time.”

As expected, the Low Earth Orbit saw the maximum traction with a total of 66 launches (63 successful), followed by Geosynchronous (27) and Medium Earth (13). What is interesting is High Earth (3) and Heliocentric Orbits (4) saw some activity with the intense debates and discussions around Mars, Moon and interplanetary missions heating up.

The year started on a somewhat sombre note with the controversy over four US nanosats launched on January 12 without proper license, in what could be perhaps the first time in the history of space missions. The four tiny satellites, launched aboard a ISRO PSLV, were developed by Silicon Valley startup Swarm Technologies, which it turned out didn’t have permission to launch. Federal Communications Commission (FCC), the federal agency to regulate commercial satellites in the United States, had rejected its application for launch in early December because they were too small be tracked and therefore unsafe to put into orbit. On December 24, FCC announced that A $900,000 penalty will be imposed on Swarm Technologies. “Unauthorized deployment and operation of satellites risks satellite collisions and radio frequency interference, threatening critical commercial and government satellite operations,” FCC said in a statement. “To settle this matter, Swarm Technologies admits that it engaged in these unlawful acts, will implement a five-year compliance plan, and will pay a $900,000 civil penalty.”

A record number of 21 launches including 17 satellite launches, 3 resupply missions to the International Space Station and one Falcon Heavy test flight kept Elon Musk’s company in the news throughout the year. While SpaceX continued to wow the audience each time its Falcon rocket came back from space to sit back gracefully on its launchpad as if like a video in playback, it is Falcon Heavy’s test launch which made the world go crazy.

There was wild applause as the first Falcon Heavy, the most powerful rocket in operation, successfully launched on February 6. Musk added his signature flamboyance to the launch by sending a real Tesla car to space in the rocket. Surreal live links from the video feeds of the car showed it cruising towards Mars complete with a dummy astronaut Starman in the driver’s seat and a “Don’t Panic” message on the dashboard. SpaceX successfully went onto separate the three rocket boosters of the heavy rocket, and landed two. Now, the company is attempting an impressive back to back launch of Falcon Heavy in the first half of 2019 for NASA.

SpaceX was again in news every time the topic of human spaceflight came up. The anticipated return of US to human spaceflight was further delayed to 2019 as SpaceX and Boeing both carried further tests throughout the year. While SpaceX unveiled its astronaut cab in August by inviting media persons to its HQ to get a close look at the Dragon Crew Dragon, NASA announced in November that it is targeting January 7, 2019 for the launch of its first commercial ferry ship on an unpiloted test flight to the International Space Station.

Meanwhile Boeing, which is working on its CST-100 Starliner, is planning an unpiloted test flight in March, followed by a piloted flight to the station in August.

If everything works well, one or both companies will be certified to begin operational crew rotation flights sometime next year, ending the Russian monopoly in the field of human spaceflight. Currently, the Soyuz is the only available transportation for not only the American but also for European, Canadian and Japanese astronauts since the retirement of NASA’s space shuttle in 2011.

The hole in the Space Station

Speaking of Soyuz, in what could be considered one of the most bizarre stories of 2018 and what could possibly be the inspiration for a great Hollywood blockbuster some day, a leak was spotted on the International Space Station, leading to continuous fall in air pressure on the orbiting laboratory. The ISS crew, comprising three Americans, two Russians and one German astronaut at that time, found a small 2-mm hole in one of the Russian Soyuz capsule docked on the Russian side of the ISS.

The damage, which the astronauts managed to successfully plug at the time, was initially thought to have been caused by a micrometeorite piercing the spacecraft. Roscosmos then said the hole in the Soyuz capsule may have been drilled by a technician during its manufacturing. But since then, claims and counter claims and conspiracy theories and accusations have continued to float. Now Russian cosmonaut Sergei Prokopyev says that the hole was created from the inside. Russian investigators are now examining samples Prokopyev and crewmate Oleg Kononenko collected during a December 12 spacewalk in an effort to find out what caused the hole.

The jury is still out on that and while only a proper investigation can tell us what really happened, with increasing talks of human space missions, this incident has only highlighted the dangers involved.

The Moon and Mars may have made all the noise all through the year, but it actually stretched all the way from the sun to the edge of interstellar space. Space agencies launched missions to explore several planets in the solar system, as well as the sun. 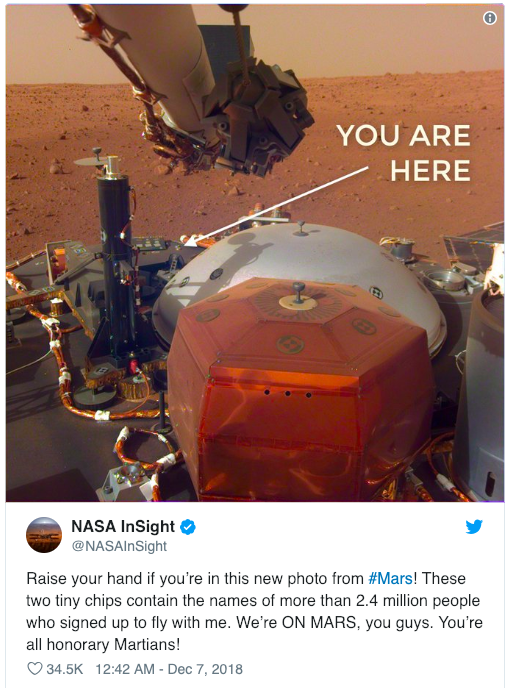 The NASA InSight seismology probe, which launched in May 2018 and landed on Mars in November, sent some of the most stunning pictures of the Red Planet. But it was the seismic sensor that was placed in December and sent the first sounds from our neighbor that seemed to be more incredible. 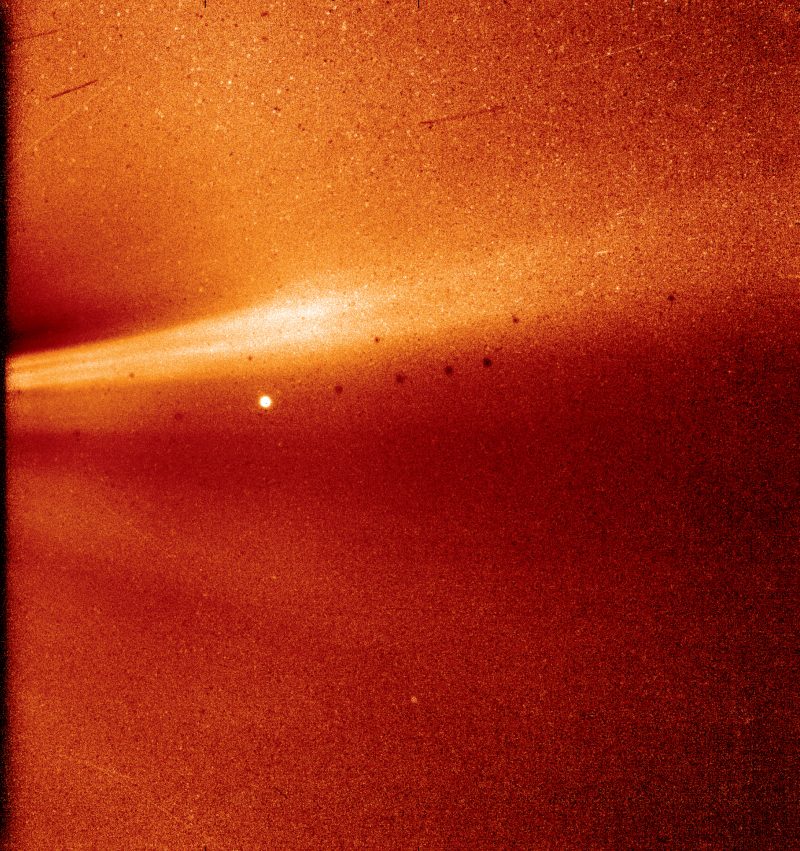 Parker Solar Probe acquired this image – the first photo from inside the sun’s outer atmosphere, or corona – when the craft was only 16.9 million miles (27.2 million km) from the sun’s surface. Courtesy NASA

Meanwhile the Parker Solar Probe, which was launched to explore the Sun in August 2018, managed to reach closest to the Sun than any other spacecraft. On December 12, NASA released the first photos from inside the sun’s atmosphere that the Parkar probe had sent back.

On 20 October ESA and JAXA launched BepiColombo to Mercury, on a 10-year mission featuring several flybys and eventually deploying two orbiters in 2025 for local study. The asteroid sampling mission Hayabusa2 reached its target Ryugu in June, and the similar OSIRIS-REx probe reached Bennu in December. China launched its Chang’e 4 lander/rover in December to attempt the first ever soft landing on the far side of the Moon.